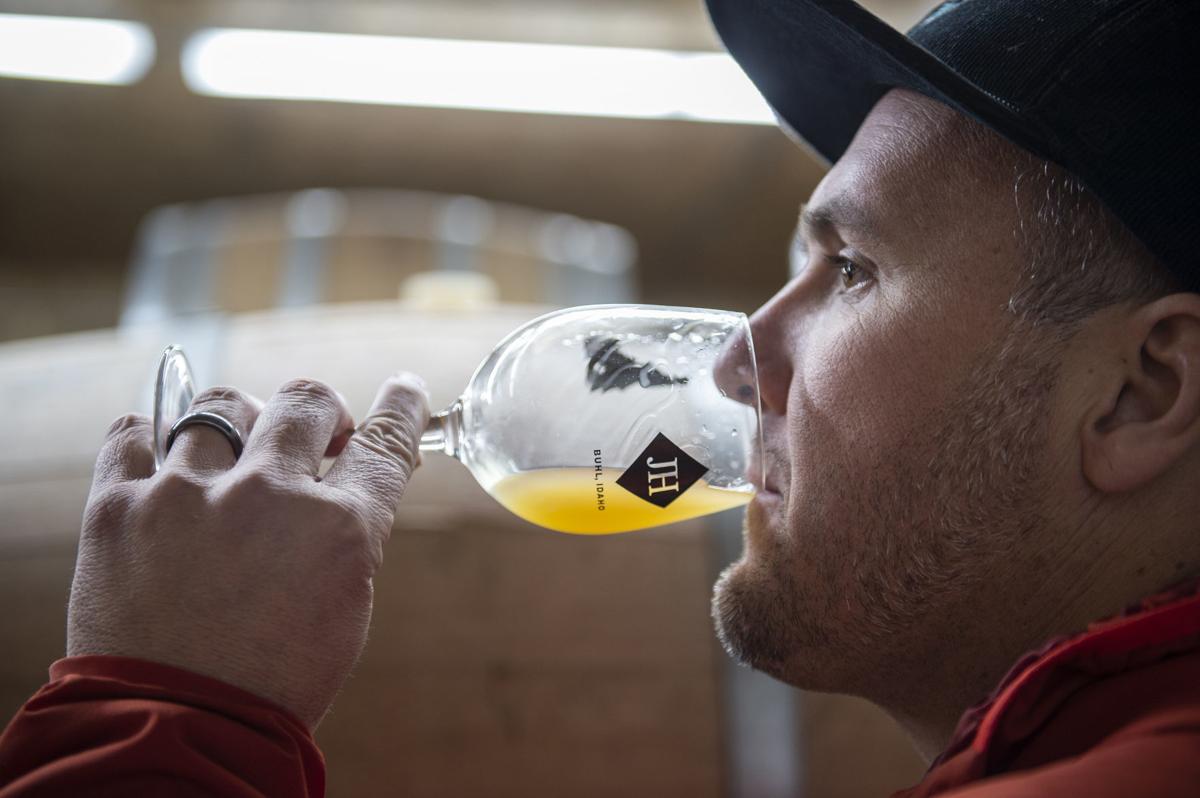 Owner and winemaker James Holesinsky samples his ice wine Dec. 5 at Holesinsky Vineyard and Winery near Buhl. This was the second time in 18 years that Holesinsky was able to make ice wine. 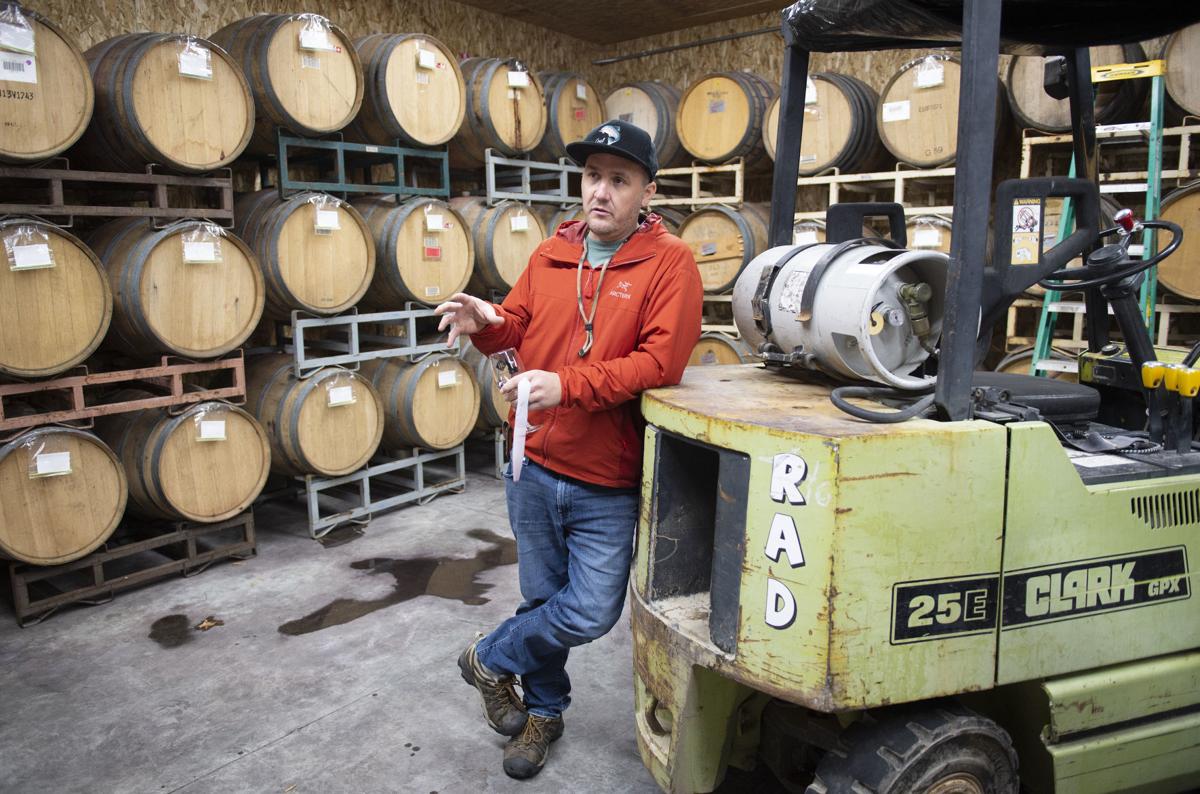 Owner and winemaker James Holesinsky talks about wine Dec. 5 at Holesinsky Vineyard and Winery near Buhl. 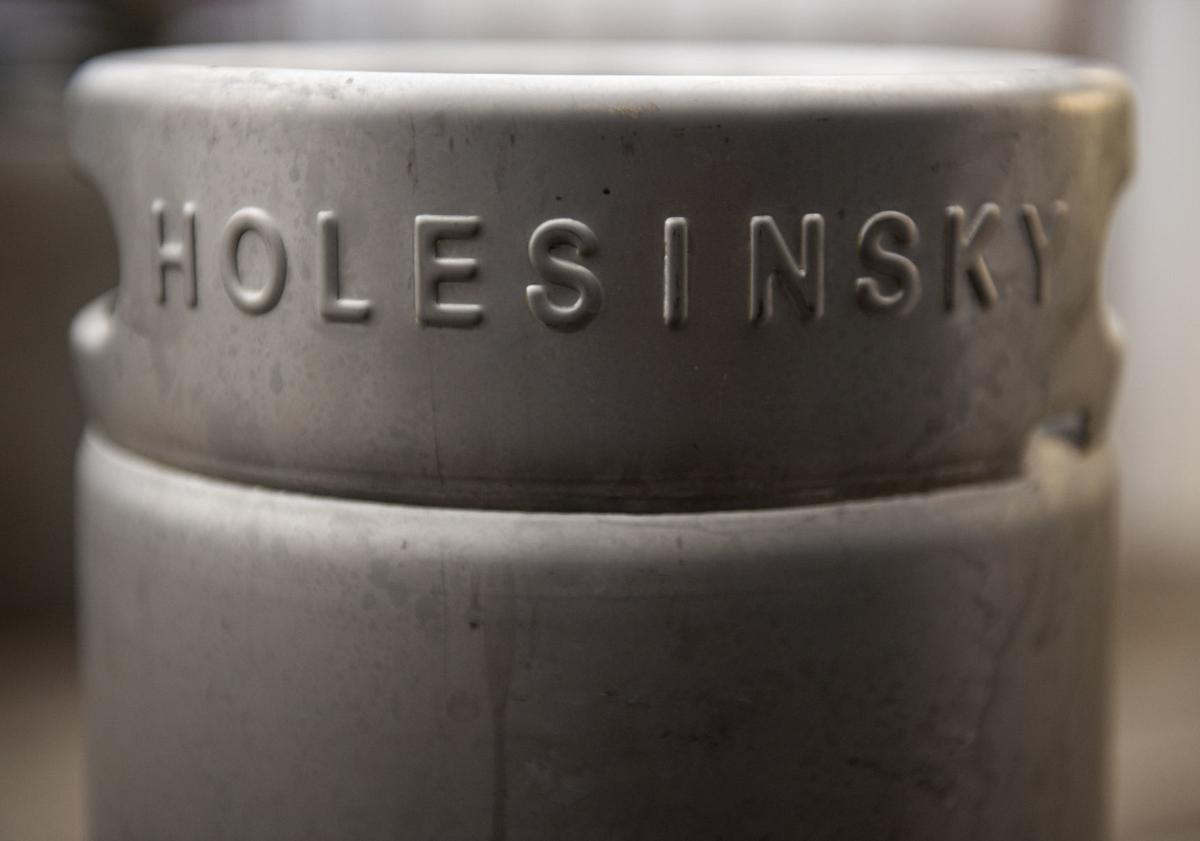 Owner and winemaker James Holesinsky kegs some of his wine Dec. 5 at Holesinsky Vineyard and Winery near Buhl. 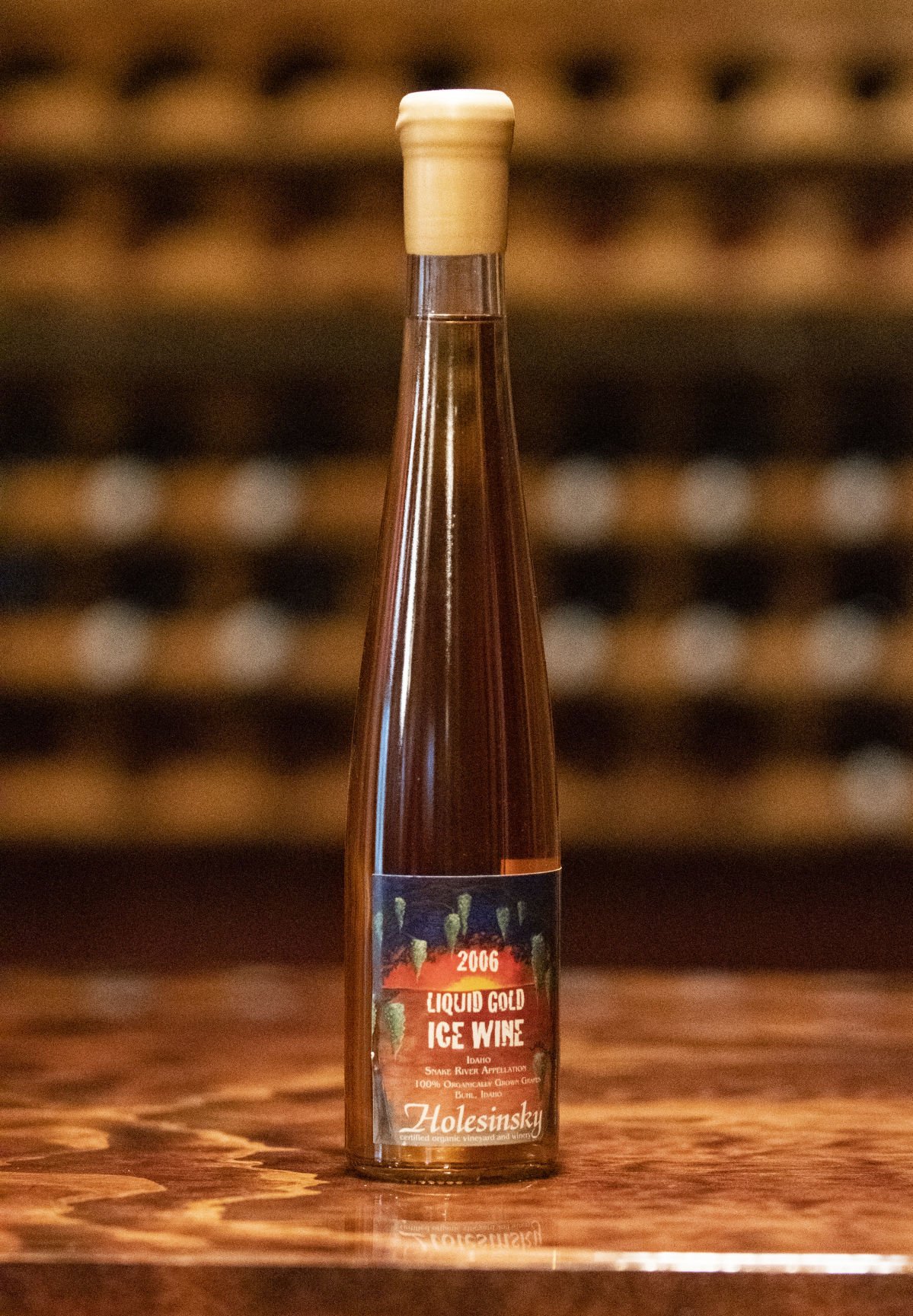 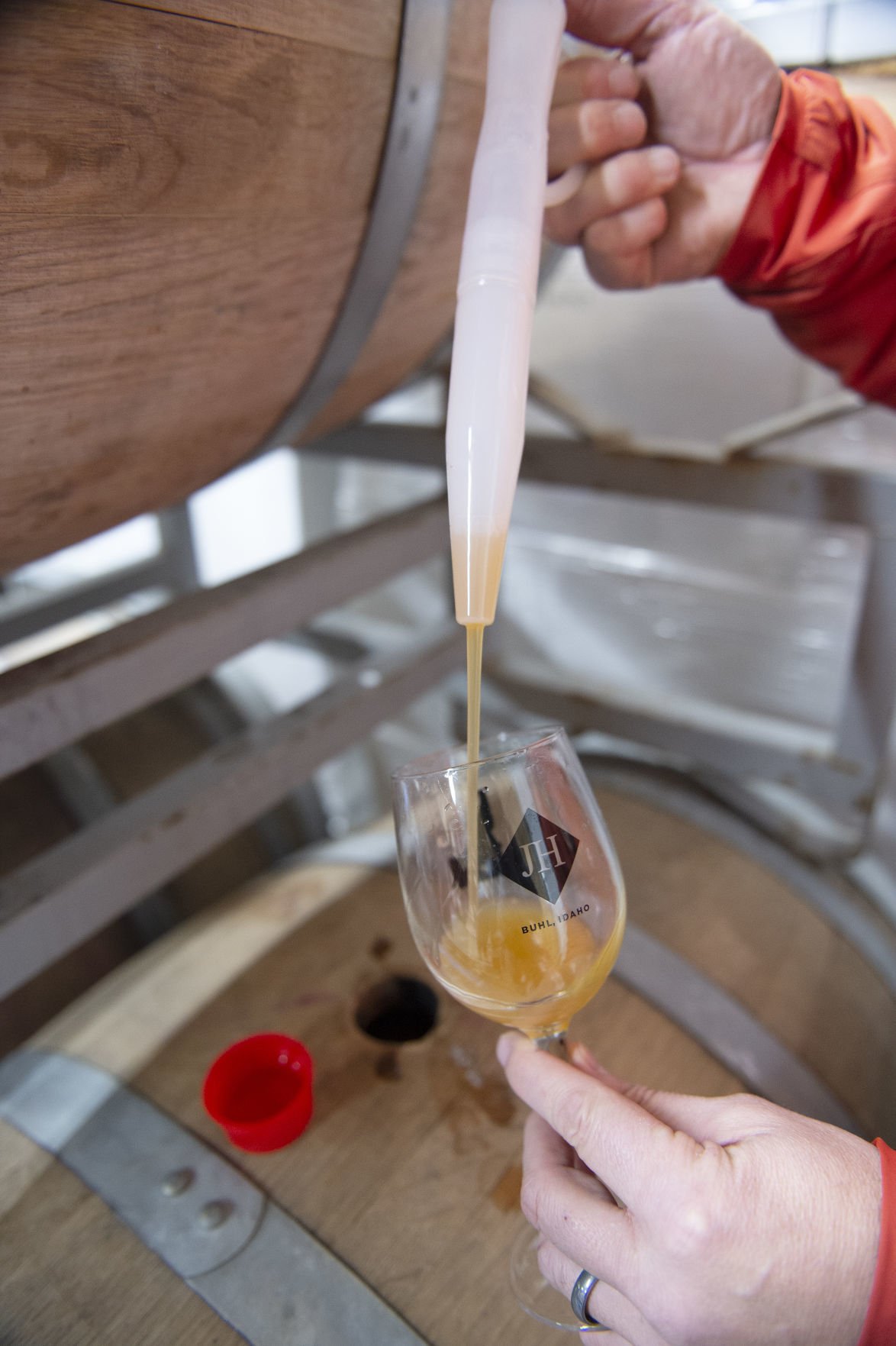 BUHL — He dipped his pipette into the barrel and pulled out a couple of ounces of liquid gold.

Holesinksy has been making wine for 18 years. This is just the second time he’s had a chance to make ice wine. The conditions haven’t been right since 2006. The 2006 harvest was on Halloween; this year's fell on Oct. 30.

“It’s hard to do,” he said. “The grapes have to be in the perfect condition. You can’t have an influx of an avian bird problem. ... All of the stars have to align in order for this to be a reality.”

To make real ice wine, a winemaker has to let his grapes freeze on the vine, harvest them before sunrise while they’re still frozen and squeeze them without letting them thaw. Most of the world’s ice wines come from Germany and Canada. In Idaho, it’s a rarity.

The process is risky, but it makes a complex, decadent wine. The winemaker’s harvesting the fruit when the nutrient content peaks. Also, because Holesinsky pressed the grapes while they were frozen, the water content in the wine is lower. It’s a more concentrated product.

“When we picked the grapes while they were frozen, all of the water was suspended as ice,” Holesinsky said. “So when you squeeze them, all you squeeze out is the sugar and the nectar, the flavoring.”

Normally, 2 acres of grapes make 12 barrels of wine. This precious barrel of ice wine — the lone ice wine barrel out of the 40 total barrels Holesinsky made this year — took 2 acres of white Riesling grapes, grown in Hagerman.

“The intensity of flavor is a thousand times a conventional wine,” Holesinsky said.

This ice wine has twice as much sugar as a conventional wine. Most wines are about 21% sugar. This ice wine checks in at 41%. Holesinsky’s ice wine tastes rich and juicy, especially compared to the lemonade-colored wines a few barrels down.

Winemakers who can pull off an ice wine earn bragging rights, but the extra work can be lucrative, too. Ice wines are expensive.

Pain in the ice

An enologist has to have perfect weather conditions to make ice wine.

But special weather requirements aren’t the only reason the Gem State doesn’t dabble much in the dessert alcohol. Turning 2 acres of grapes into a barrel of ice wine is grueling.

“We were out picking ice wine at 4 o’clock in the morning at 5 degrees,” Holesinsky said.

It’s not easy to find people willing to wake up in the middle of the night, don headlamps and harvest frozen grapes by hand in Hagerman, Idaho. Labor for the ice wine harvest didn’t come cheap — Holesinksy had to pay his workers $20 an hour. It’s important to finish the harvest quickly — before the sun can start melting the ice in the fruit — so it takes a big crew.

After Holesinksy had the grapes off the vines, he had to press them in the cold.

Normally it takes about 45 minutes to squeeze enough grapes for a barrel of wine. But frozen grapes are tougher.

“You have to squeeze the living (heck) out of it for about four days,” Holesinksy said.

Because the fruit was so full of minerals, Holesinsky said the juice initially smelled like sawdust and dirt, almost like wet cardboard.

The challenge doesn’t end once the juice is in the barrel. Because the sugar content is so high, it’s more difficult to initiate the fermentation process, and it’s trickier to keep the yeast alive. This ice wine is 14% alcohol.

If Holesinksy had been unlucky, birds could have eaten up a large amount of his crop. If he’d waited too long, the grape plants could have taken up the water in the grapes, drawing it into their roots, leaving withered raisins on the vines. The fruit could have started rotting, too.

An ice wine harvest also taxes the plants in the vineyard. When a grape plant senses a freeze, it will pump nutrients into its grapes to provide nourishment for its seeds. That improves the wine, but it comes with a cost.

“They pull all of the resources out of that cane — extra sugar, extra amino acids, polysaccharides, you name it,” Holesinsky said.

That stress isn’t a big deal when you’re only doing an ice wine once every decade or so, Holesinsky said, but you wouldn’t want to weaken your plants with an ice wine harvest every year.

From the vineyard to the shelves

After aging the ice wine for about six months, Holesinksy will bottle it. He’ll filter it lightly before bottling, which will make it less cloudy, but he’ll leave some of the sediment in order to retain the complex flavors. He said a bottle will probably sell for roughly $71 in stores.

When Holesinsky made his first ice wine in 2006, it was good, but a bit syrupy. This one will be better, he said. He hopes people get a chance to taste the wine after all the hard work that went into it.

“It’s very unique,” Holesinsky said. “You don’t get to experience this every day.”

Editor's note: This story has been updated to include that the ice wine was harvested at the end of October. In addition, due to an editing error, a previous version of this story misstated how many barrels of ice wine were produced. There was just one.

What time period do you belong in?