BOISE — Leaders of Idaho’s largest hospital systems warned this week that more and more patients are arriving with COVID-19, and health care institutions fear an impending crisis. Combined, the systems reported 78 patients with the virus on Tuesday.

St. Luke’s Health System CEO Chris Roth told the board of the Central District Health Department on Tuesday that St. Luke’s had 51 COVID-19 patients across the system’s hospitals, of whom 14 were in intensive care units.

“I want to put into perspective the 51 admissions that we have today,” he said. “That compares to an all-time high in the months of April, May and June of 41. That was the high-water mark. And in the last week, we’ve reached a new high-water mark, if you will, just about every day.”

Roth said that, since mid-June, the health system’s COVID-19 admissions have climbed about 20% per week.

Saint Alphonsus Health System is alarmed by a similar trend, CEO Odette Bolano told the board on Tuesday.

“So, over the last two weeks, we have been seeing a significant increase in the number of patients in the hospital with COVID,” Bolano said. “I would say probably (about a week) ago, we started with three. We went up quickly to nine, we went to 16, we went to 21, and today we are at 27.”

Back in the spring, health care leaders hoped that June and July would give Idaho a breather from the pandemic — a chance to regroup, bridge gaps in the coronavirus response, and prepare for a second wave in the fall. Summer months are usually quiet on the infectious disease front: a lull between flu seasons, as people aren’t spreading as many germs indoors or in schools.

That’s not what happened.

Instead, as Gov. Brad Little carried out his plan for reopening the state, the number of coronavirus cases in Idaho began to climb. The Idaho Department of Health and Welfare is now reporting hundreds of new COVID-19 cases across the state per day, with nearly 9,000 people infected as of Wednesday.

The hospitalizations that usually trail cases by a couple of weeks have arrived.

Some local officials are taking action to try to slow the virus. The Central District Health board voted June 22 to revert Ada County to an earlier stage of reopening, a decision that included shutting down bars. Boise and other cities mandated masks or face coverings in public.

That hasn’t yet reversed the tide.

“Our modeling shows week-after-week increases,” Roth said, “because there’s nothing that we’ve been able to determine is going to change the trajectory at this point, given the ... the collective behaviors of the community, I’ll put it that way.”

How many people are hospitalized?

We don’t know. We have a pretty good idea, though.

The U.S. Centers for Disease Control and Prevention and the Idaho Department of Health and Welfare both publish daily counts of hospital patients with known or suspected COVID-19.

Those numbers ranged from lows in the teens and 20s in May, to record highs in the 90s and 100s this week.

Why are the CDC’s numbers different from Health and Welfare’s?

The short version: Both agencies use the same hospital data repository, the National Healthcare Safety Network, to produce their estimates. But they have different approaches to getting the data.

As for the giant difference in March and early April?

The CDC “does some kind of weighted estimation,” according to Health and Welfare. “They apply a formula based on the (number) and type of hospitals reporting to come up with an ‘estimate’ of the actual numbers,” but the state uses the actual numbers reported by Idaho’s hospitals for those dates.

Why don’t we know exactly how many are hospitalized in Idaho?

The short version: Some Idaho hospitals don’t report how many COVID-19 patients they have every day, and their lack of input might skew the statewide numbers. But based on what we know about the process, the numbers are probably pretty reliable.

And the long version:

Idaho hospitals are not required to report, and it would take an act of law to force them to, according to Health and Welfare. The good news is most of Idaho’s hospitals do so voluntarily. Idaho’s rate of hospital participation in the network is among the highest in the country.

Hospitals have been extremely guarded with this information. Saint Alphonsus and St. Luke’s last week both declined to tell the Statesman how many COVID-19 patients were in their hospitals, directing a reporter to get the information from public health agencies. This week, they disclosed the numbers publicly at the Central District Health board meeting.

There’s no rule on when a hospital should report their patient numbers, according to Deputy State Epidemiologist Kathryn Turner. That’s not a recipe for perfect accuracy, especially in a pandemic when things can change by the hour. “It’s not for midnight-to-midnight, it’s whenever the facility went around and gathered the data,” Turner said. So, one hospital might report in the morning after discharging two patients, while another reports at night after admitting five.

Despite problems, numbers probably aren’t off by much. Here’s why

Idaho has 51 licensed and certified hospitals. The CDC says 44 of them reported on June 8.

Which are the seven that didn’t report? We don’t know. We do know that some Idaho hospitals are unlikely to admit a COVID-19 patient — because they specialize in surgery or rehabilitation or behavioral health, or they’re just not equipped to care for someone with the coronavirus.

That’s one reason Turner thinks the data from National Healthcare Safety Network is actually pretty accurate — maybe the hospitals that aren’t reporting COVID-19 admissions just don’t have any to report.

“We feel like now we can display the data, and we’re sure that it’s representative of what’s going on,” Turner said.

The CDC, on the other hand, sees a risk of underreporting or overreporting. So it hangs a lot of caution tape around the numbers. On Tuesday, the CDC said an estimated 116 patients were hospitalized in Idaho — noting that, technically, it could be anywhere between 35 to 197.

Based on what we know, and what St. Luke’s and Saint Alphonsus said on Tuesday, the 116 number sounds reasonable, and so do recent days’ counts from both the CDC and Health and Welfare.

What do we know about the people being hospitalized?

The state’s daily report on Wednesday said at least 411 people in Idaho have been hospitalized at some point with COVID-19, 133 in the ICU.

But aside from a few anecdotal cases, no information is released by public health agencies or hospitals about the ages, ethnicities, underlying conditions, gender or survival of those 411 Idahoans needing hospital care.

Health care officials have said in the past week that hospitals are admitting people in their 20s to 40s.

Dr. David Pate, retired CEO of St. Luke’s and a member of the governor’s coronavirus working group, said Friday on Twitter that “we have two 20 year olds in Idaho hospitals, one in intensive care.”

What are Idaho health care leaders so worried about? Hospitals aren’t full

In fact, one of the major concerns from hospitals around the country and in Idaho is that patients with serious non-coronavirus health issues aren’t coming to the emergency room because they fear it will be full of COVID-19 patients. In reality, a small portion of the people seen in Idaho ERs have symptoms of COVID-19 such as fever or cough. Idaho’s hospitals are taking measures to protect everyone in their buildings from exposure to the virus and urge Idahoans with any health concerns to seek medical care.

But they and others voiced concerns about exponential growth in cases, if infected Boise residents seed the virus around the state’s largest metro area.

They worry about managing admissions two weeks from now, when people who are testing positive today show up at the emergency room because they can’t breathe. Or a month from now, if those who are just being exposed to the virus today get sick and need life-saving care in an increasingly crowded COVID unit.

St. Luke’s Chief Medical Officer Dr. James Souza warned that the system’s hospital in Blaine County was quickly overcome as that area’s outbreak suddenly hit a boiling point. Patients had to be transferred to the hospital in Twin Falls, then to the Treasure Valley.

“The point about an exponential growth phase is that it can turn on a dime,” Souza said. “The rate at which you can find a unit, or units, overwhelmed is staggering. And we experienced this in Blaine County, in miniature, in our health system circa the last week of March and first week of April.”

What’s different now is that Ada and Canyon counties are the hot spots, he noted, with a population about 30 times the size of Blaine County’s.

Bolano said that as cases increase, hospitals may have to start considering whether to pull back on other health care services.

Governor, State Board of Education push for schools to reopen

As cases of the new coronavirus continue to increase in Idaho, Gov. Brad Little and the State Board of Education are encouraging schools to reopen for in-person instruction at the end of the summer.

Gov. Little issued a plan to use federal money designated for COVID costs to cut property taxes. But 24 county prosecutors say they are worried the plan might not be legal. 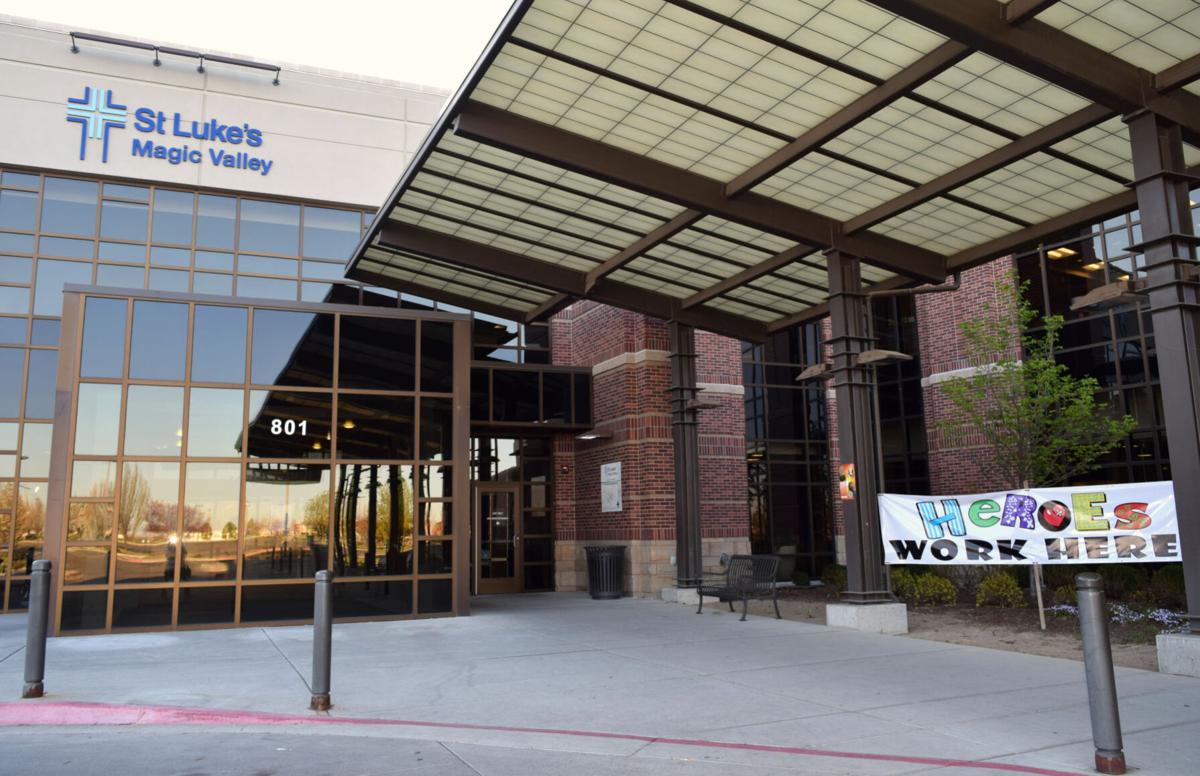 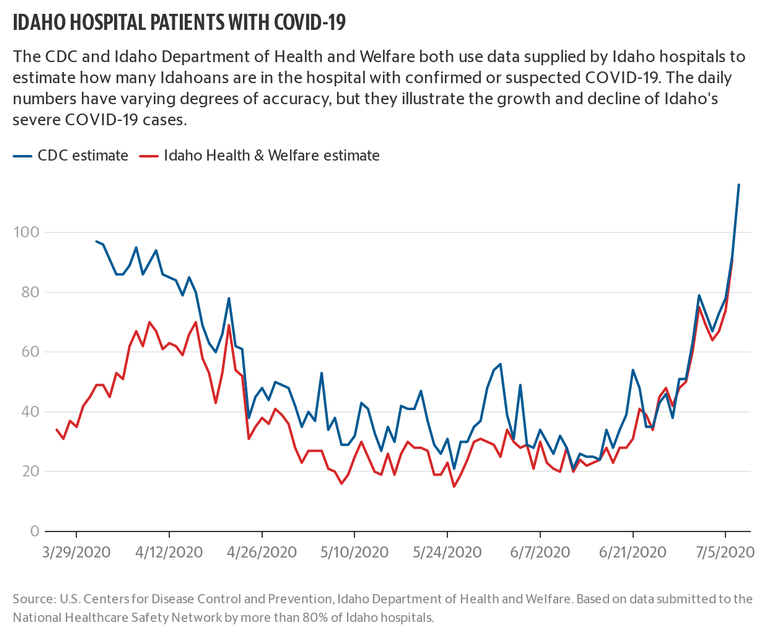