Jacob B. Van Wagener, treasurer of the Twin Falls North Side Land and Water Co., came to the Magic Valley from Pittsburgh in the early 1900s.

Van Wagener, a railroad investor, was previously affiliated with James and William Kuhn, who purchased land and water north of the Snake River from the Twin Falls Land and Water Co.

The Kuhn brothers opened the Jerome townsite in 1907, and water first flowed into the north side canal system in 1909.

Van Wagener purchased 160 acres of Carey Act land to be developed as a showcase farm, called Mountain View Ranch, just west of today’s U.S. 93, between the now-defunct towns of Barrymore and Falls City southeast of Jerome.

The 40-by-110 barn was built on the bank of a hill which allowed the first floor to “rise” over a daylight basement on the south side from the ground level on the north side. The cows were housed in the basement.

The barn is owned by Nina and John Hollifield and is used as a restaurant and event center.

Editor’s note: This column first ran Dec. 1, 2016, in the Times-News and at Magicvalley.com.

By the time the United States joined the Allied Forces in World War I, its allies were on the verge of starvation. Farmworkers in Europe were …

A bold robbery of the Jarbidge U.S. Mail stage and cold-blooded murder of the driver was “like an echo of the old-time lawless days,” the Dec.… 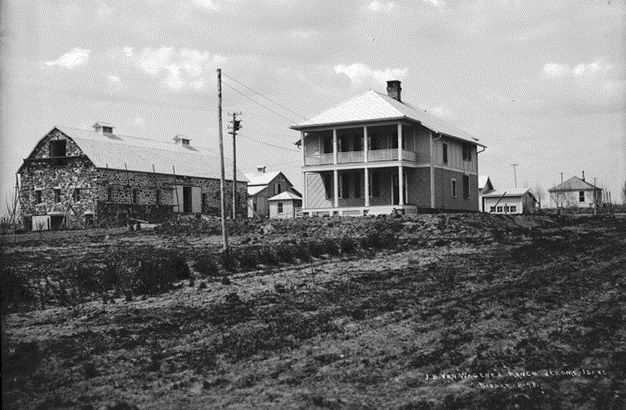 The Van Wagener Ranch is seen in this early Clarence E. Bisbee photo. The 1912 stone barn, now known as the Mountain View Barn, is owned by Nina and John Hollifield.