The last passenger train out of Twin Falls left town 65 years after the first train arrived.

The first train on the newly laid tracks of the Oregon Short Line pulled into town on the morning of Aug. 7, 1905, to find a large crowd waiting to celebrate its arrival. The second train arrived at noon.

But Lars Larsen, a Rock Creek pioneer who attended the 1905 celebration, expressed doubt about the numbers touted by the newspaper.

Larsen accompanied Kelker and two pioneer women on the railroad’s last passenger train excursion to Buhl, a commemorative trip to mark the end of an era that cost the four passengers 49 cents per ticket.

Along for the ride with Kelker and Larsen were Gladys “Dolly” Stricker and Cora McIntire. Larsen, Stricker and McIntire were friends when they were young, Kelker said in the Jan. 5, 1970 edition of the Times-News.

All three were born in the late 19th century in Cassia County, years before Twin Falls County was envisioned.

“We have seen each other more when we grew up, though, because it was just too far between homes in the old days,” McIntire told Kelker.

“I hate to admit it, but when I heard a train was coming to Twin Falls, I didn’t even know a train needed a track,” Stricker told Kelker on the trip to Buhl.

Hidden History: Knights of Pythias set out to build stairs to base of Shoshone Falls

The Knights of Pythias announced in 1908 they would build stairs to the bottom of Shoshone Falls as a tourist attraction for the upcoming Grand Lodge.

Though Clarence and Jessie Bisbee had no children of their own, decorating their home for Christmas was done with care.

Hidden History: Got your goat?

A Boise mess sergeant cooked up a goat for the troops' dinner in 1931. Turned out the goat — from Buhl — was Company D's mascot.

This story has it all: A headless body found in a cave, a man who murdered his wife and then escaped jail, polygamist pioneers, a grave without a corpse, bootlegging and more. And it's all true.

George Scott worked for the Utah Construction Co. and was one of the best-known cooks in the area. He was the brother of shyster Death Valley Scotty.

Sam Collier — aka Stove Pipe Sam — robbed a stagecoach of $1,500 worth of gold dust in 1869 near the Desert Station, west of present-day Twin Falls.

Hidden History: Who were the Strickers?

For years, Stricker Ranch operated much like other ranches in the valley, prior to the advent of the Magic Valley's irrigation systems. So what made Stricker Ranch so special?

Historic Rock Creek Station and Stricker Homesite gets a makeover

People have been hanging out at Rock Creek Station and Stricker Homesite for nearly 200 years. Now visitors will have an even better experience. 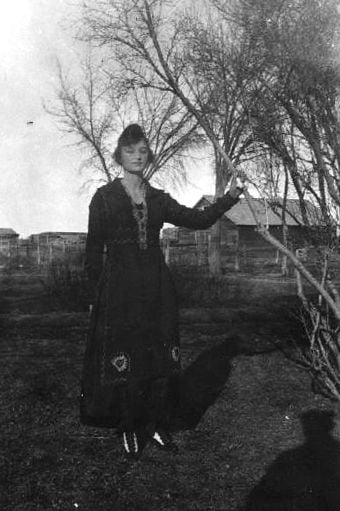 Gladys "Dolly" Stricker is seen in her youth. The daughter of Herman and Lucy Stricker didn't see the first train to come to Twin Falls, but she rode the last passenger train out of town to Buhl.