The Louisiana Purchase in 1803 was key to the United States’ westward migration in the 19th century.

The purchase of more than 800,000 square miles of French territory from New Orleans to Canada and the Rocky Mountains opened up travel routes into little-known terrain west of the Mississippi.

While western migration often led to lands west of the Rocky Mountains, some of the first settlers who crossed the prairie found a new home where only American Indians and a handful of fur trappers had traveled.

The first band of Mormons arrived July 24, 1847, in the Salt Lake Valley in what was then Mexican territory. Utah became U.S. property when Mexico ceded the Southwest to the U.S. in the 1848 Treaty of Guadalupe Hidalgo.

The first waves of Mormons, members of The Church of Jesus Christ of Latter-day Saints, came to Utah in covered wagons. But later, they traded in their more costly wagons and oxen for Mormon handcarts, an abbreviated version of the traditional covered wagon that was pulled and pushed by people instead of livestock.

In 1883, I.B. Perrine settled in the Snake River Canyon near the Blue Lakes. He farmed hundreds of acres on both sides of the canyon.

Hidden History: The 'Great Commoner' announces the birth of great-granddaughter at National Convention

Hidden History: The canal breach of 1978

In the early hours of May 12, 1978, the High Line Canal breached, sending 1,500 cubic feet per second of irrigation water through an 80-foot hole in the bank, across a pasture and into Rock Creek Canyon southwest of Kimberly.

Randy Perrine, great-grandson of Twin Falls founder I.B. Perrine, called the Times-News on Wednesday and asked why folks in the Magic Valley don't know where the term "Blue Lakes" came from.

Hidden History: From Riverton to Heyburn

Longtime Heyburn resident J.A. Handy described in 1959 the area before the Minidoka Project.

MINIDOKA — What a funny word.

Hidden History: The Mosler safe in the county courthouse

Just inside the Fourth Avenue North entrance of the Twin Falls County Courthouse sits a Mosler “cannonball” safe, made in the early 1900s. True to its obligations, the only secret the safe reveals is that it once belonged to the Bank of Hansen. 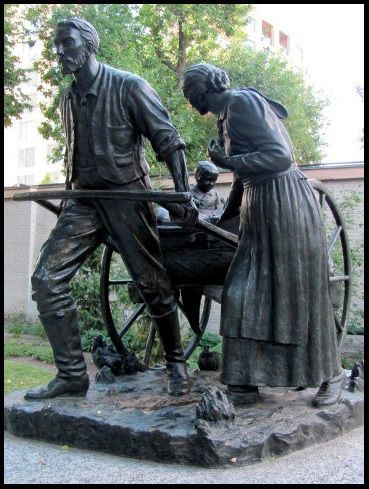 A bronze sculpture depicting a Mormon family pulling a handcart on the Mormon Trail was created in 1947 by Torleif S. Knaphus.