Virus update: Fauci agrees 'right on the spot' to serve Biden; Thanksgiving travel numbers are in

The Oregon Trail passed north of the basin, nestled in the shadows of Mount Harrison, while the California Trail passed south of Cache Peak and through the City of Rocks.

The Overland Stage and Kelton Freight Line ran north into Idaho from Utah, but both turned west at the City of Rocks, before reaching the basin.

It wasn’t long before cattlemen found the basin, with its flowing creeks and abundant meadows.

By 1868, thousands of head of cattle grazed in the region, which then composed eastern Owyhee County.

In 1870, the Kelton Freight Line bypassed the City of Rocks and continued north through Marsh Basin before converging with the Oregon Trail.

The following year, homesteader William Vaughn built the first home in the basin. The first “store” in the basin was created the same year when merchant Andrew Burstrom’s wagon became bogged down in the mud. He sold his goods off the wagon and decided to stay. Burstom later built a log store nearby.

By 1875, 14 families made the basin their home. Three years later, the City of Rocks home station was abandoned and the stage line was rerouted through Marsh Creek.

In 1876, Rock Creek merchant James Bascom sold his store to Herman Stricker and moved to the basin. Bascom and Miles Robison eventually purchased Burstrom’s store and 10 acres of Vaughn’s homestead to create a town site.

By the late 1870s, nearly 95 families had settled in the area, 250 miles from the Owyhee County seat at Silver City.

Marsh Basin cattleman and Territorial Rep. Rice Wood, in 1879, introduced a bill to divide the county. Marsh Basin was then proposed as the seat of the new Cassia County, which extended to the present Owyhee County line, a few miles west of Balanced Rock.

The town’s name was then changed to the more sophisticated “Albion.”

In last week’s Hidden History column, the Times-News ran a photo of a young man on a motorcycle. 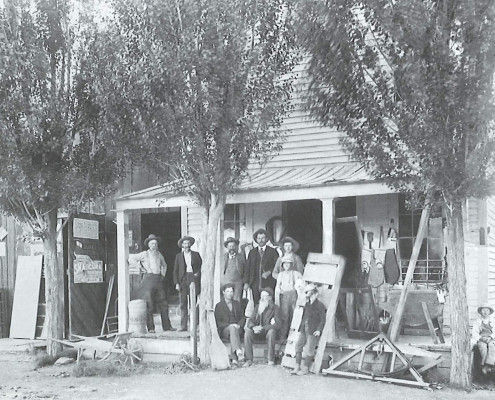 Customers are seen gathered around James Snodgrass, second from the left, at the Snodgrass General Store in 1907. 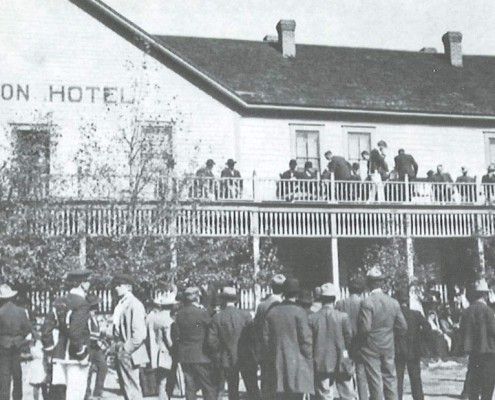 Townsfolk gather for a political rally at the Albion Hotel in Albion, the seat of Cassia County from 1879 to 1919. The hotel was built in the late 1880s and was said to be a first-class establishment. It burned to the ground in 1914.