In early 1903, the Twin Falls Land and Water Co. began work on an irrigation project to transform the barren south-central Idaho desert into what we now know as the Magic Valley.

Idaho’s executor to the world fair, Clarence B. Hurtt, and I.B. Perrine, who entered his own Blue Lakes Ranch fruit in the fair, met Masqueray in St. Louis, and the two men later recommended Masqueray to the Twin Falls Investment Co. to plat the city of Twin Falls.

But Masqueray’s forte was not platting cities in the west, Twin Falls historian Jim Gentry said. Masqueray trained at the prestigious École des Beaux-Arts in Paris and is best remembered for his landmark buildings, such as the lavish Basilica of St. Mary in Minneapolis.

Perrine may have suggested Masqueray to the investment company in an attempt to put some of the World’s Fair romance into Twin Falls.

“It would be called ‘name-dropping’ today,” Gentry said.

Masqueray’s name has now been dropped into a modern project in downtown Twin Falls.

Mychel Matthews reports on history and rural issues for the Times-News. The Hidden History feature runs every Thursday in the Times-News and at Magicvalley.com. If you have a question about something that may have historical significance, email Matthews at mmatthews@magicvalley.com or call her at 208-735-3233.

Jessie Robinson was quite smitten with Clarence Bisbee when she met him in 1904. They were married in 1910.

I.B. Perrine admired a particular beaver’s dam-building skills. Each time Perrine tore down its dam, the beaver would rebuild it by the next morning.

The American Legion was chartered in 1919 as “a patriotic veterans organization devoted to mutual helpfulness,” and a local post was endorsed.

Early residents harvested ice from the Shoshone Ice Caves, giving Shoshone a reputation as being the only place around where one could buy a cold beer.

Despite its name, Vineyard Lake has never had grape vines growing around it. Here's how it got the name.

The rowdiest bunch in Twin Falls — prior to the town's Evel Knievel days — may have been the local chapter of the Women's Christian Temperance Union.

Hidden History: How do you pronounce 'Jarbidge'? 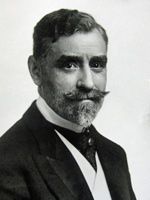 The Twin Falls Investment Co. hired Emmanuel Louis Masqueray in 1904 to plat the town. Masqueray trained at the prestigious École des Beaux-Arts in Paris and is best remembered for his landmark buildings, such as the lavish Basilica of St. Mary in Minneapolis.