Nine months after a Buhl man disappeared from his home west of town, Twin Falls County Sheriff Frank Kendall dug up a newly poured cement slab in the man’s barn expecting to find his body.

But no trace of Alfred Harkleroad was — or has ever been — found.

Harkleroad had worked for Buhl merchant George Gorseth, and, sometime after her husband’s disappearance, Mrs. Harkleroad went to Gorseth to claim her husband’s wages. Gorseth refused to turn over the $50 until he saw an order from Harkleroad himself, the Oct. 3, 1916, edition of the Twin Falls Times reported.

A few days later, the missing man’s wife reappeared with an order signed “A. Harkleroad.”

Harkleroad was a sociable person with many friends, they said, and never would have left without saying goodbye.

“All spring and summer, the neighbors kept whispering about the supposed mystery,” the Times reported.

When word of Harkleroad’s disappearance eventually reached Kendall, the sheriff quietly began investigating the family. Apparently, Mrs. Harkleroad couldn’t keep her story straight. She told one neighbor her husband was in Colorado; she told another he was in Nevada. Letters mailed to Harkleroad at both addresses were returned.

Mrs. Harkleroad eventually told Kendall that she and her husband had argued over where to hang the family guns. He wanted them hung over the door, but she wouldn’t allow it.

“He said that if he were not permitted to put the guns over the door, he would leave,” Mrs. Harkleroad told the sheriff, according to the Times.

“I kept house a good while before I saw you and can do so again,” Mrs. Harkleroad said she told her husband.

The missing man was her third husband, the Times explained.

The sheriff and his cohort collected pieces of evidence, including the order Mrs. Harkleroad gave Gorseth. The signature on the order looked more like Mrs. Harkleroad’s son Fred Marks’ handwriting, Kendall told the Times.

Mrs. Harkleroad’s 17-year-old daughter, Clara Hargas, told investigators her stepfather and her half-brother had a fight and her stepfather left home because of it.

Marks got wind of the sheriff snooping around and he quickly rode off “toward Wendell,” the Times reported, and he, also, was never seen in the area again.

Leo Anderson joined First Federal Savings and Loan Association in 1931. The bank did more business in one day in 1979 than its total assets in 1931.

Hidden History: The evolution of the modern home phone

“If you want your phone to ring where you are — instead of where you aren’t — just call us or ask a telephone man,” an ad said in the mid-1960s.

Early photos of Milner found by a West Jordan, Utah, woman show life in the now-defunct Magic Valley town during its second boom.

Jack Williams, the "Human Fly," scaled the Twin Falls County Courthouse during the Great War in hopes of signing recruits to the Marine Corps. 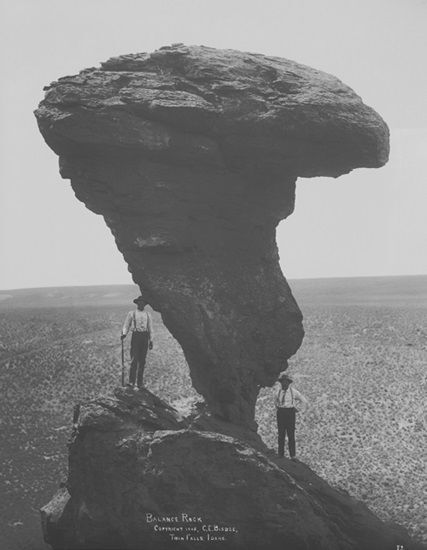 Two men pose at the base of Balanced Rock west of Buhl in this early Clarence E. Bisbee photo. In 1916, Alfred Harkleroad disappeared from his home west of Buhl and is thought to have been a victim of foul play.