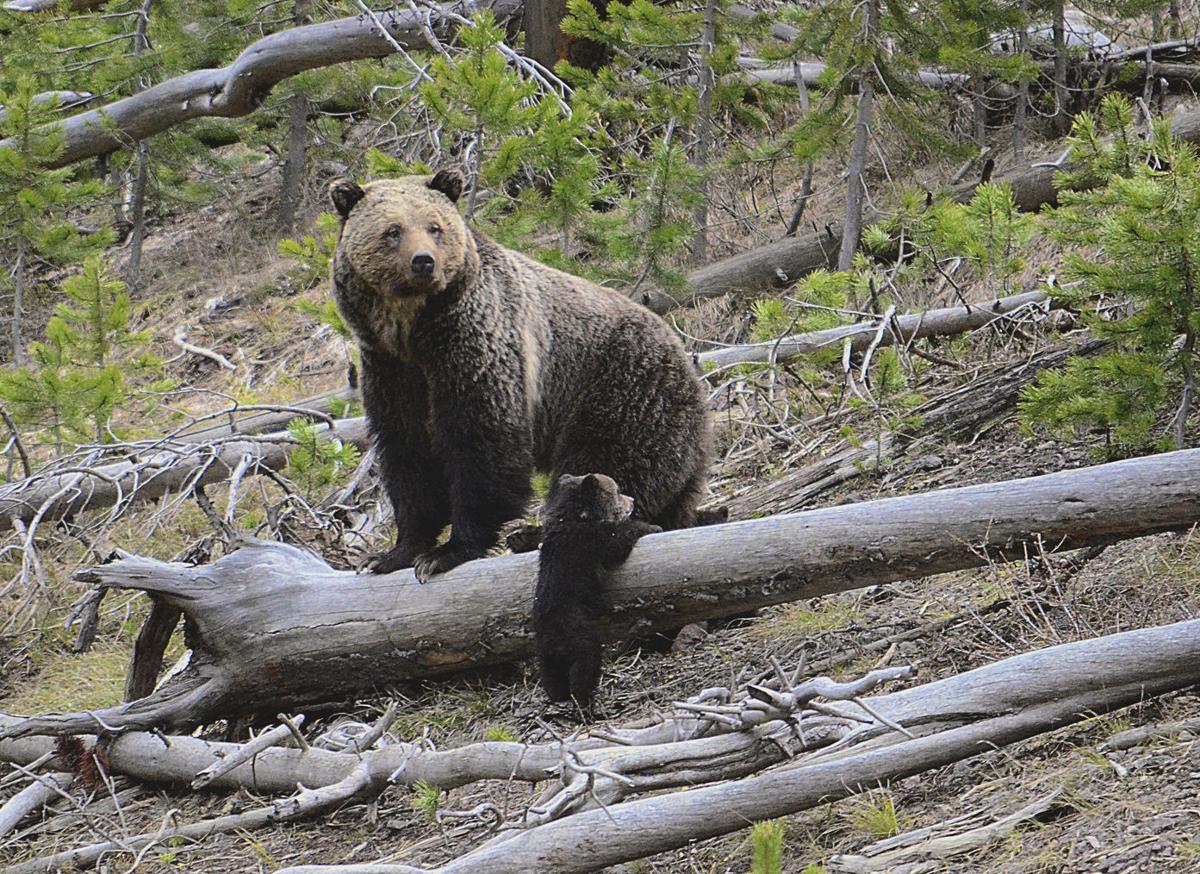 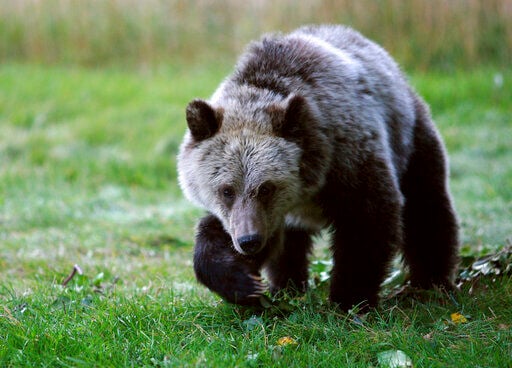 In this Sept. 25, 2013 file photo, a grizzly bear cub searches for fallen fruit beneath an apple tree a few miles from the north entrance to Yellowstone National Park in Gardiner, Mont.

YELLOWSTONE — Idaho Sens. Jim Risch and Mike Crapo say grizzly bears in the greater Yellowstone ecosystem, which includes eastern Idaho, are a conservation success story and Congress should remove them from the threatened species list.

But the 9th Circuit Court of Appeals upheld a ruling in July reversing the delisting of the great bear because of a lack of “concrete, enforceable mechanisms” to “ensure long-term genetic health of the Yellowstone grizzly.”

Now a bill making its way through the U.S. Senate’s committee process may remove the bear from the protected list, at least in the Yellowstone area.

So are grizzly bears recovered in Yellowstone? That’s not exactly an easy question to answer.

The large brown bears were listed as threatened under the federal Endangered Species Act in 1975, when their numbers dropped to around 150 in and around the national park. Today, biologists say there are at least 700 bears within the recovery area, which includes Yellowstone and Grand Teton national parks and adjacent areas in Idaho, Wyoming and Montana.

“From the population standpoint, they’re recovered,” said Jeremy Nicholson, an Idaho Department of Fish and Game regional biologist in Idaho Falls. “The issue is that they stay recovered.”

Nicholson spends most of the summer trapping bears and placing radio collars on them so he can track them. He also checks trail cameras to help provide the data that determines the population trends of the bear.

What has worked for grizzly bear recovery

The success in the national parks of keeping bears away from garbage has led to the steady increase of grizzly numbers since the 1980s into the early 2000s. But over the last decade, the bear’s numbers in national parks and their best habitats in places like Island Park near Yellowstone have stabilized.

The population overall has spread into wilder public lands just beyond the recovery area into mountain ranges like the Centennials and near communities like Tetonia, Driggs and Victor near the Tetons.

Andrea Santarsiere, a senior attorney for the Center of Biological Diversity, lives in Victor and says she has seen the presence of the bears first-hand.

“There’s pretty much grizzlies in our back yard,” she said.

She was one of the attorneys who successfully sued to stop the delisting. Overall, she opposes the “piecemeal” approach to grizzly recovery, which allows delisting in Yellowstone — and perhaps the Northern Continental Divide ecosystem around Glacier National Park — while few bears live in the Bitterroot ecosystem in central Idaho, and smaller populations remain threatened in the Selkirk and Cabinet mountains in North Idaho.

That doesn’t mean she’s not worried about the future of grizzlies in the Yellowstone ecosystem as well. Over the last decade, human-caused mortality has increased, peaking in 2018 at 65. These deaths are caused by bear conflicts with livestock, elk hunters, cars and people who attract bears with garbage and bird feeders.

“Unless we can come up with solutions to addressing that mortality, we shouldn’t remove grizzly bears from federal protection,” Santarsiere said.

How to keep bears from people in Yellowstone and beyond

Despite their reputation, grizzly bears avoid humans when they have a chance, Fish and Game’s Nicholson said. But they still come close to people all the time.

“I run into people that flat out argue with me that we don’t have grizzly bears in Idaho,” Nicholson said.

In the center of Idaho’s best grizzly habitat in Island Park, a popular tourist area southwest of West Yellowstone, Montana, many longtime residents have adjusted to the bears and keep their garbage secure. But a new threat and challenge to education efforts is the growing number of cabins that are rented by visitors for short stays.

These people have little awareness of grizzly safety issues or keeping garbage locked up, Nicholson said. “It’s an ongoing process,” he said.

A growing number of bear deaths are found beyond the animal’s traditional habitat as bears spread out, especially in Wyoming. Biologists want Yellowstone’s bears to connect with bears in Montana and to seed areas like Central Idaho.

But they don’t want them in agricultural areas such as Ashton, Rexburg or downtown Idaho Falls. So the debate is larger than what happens to them in Yellowstone.

The Idaho Fish and Game Commission is on record opposing grizzly bears in central Idaho. But in 2019, several grizzly bears showed up, and, under federal law, the state must protect them under the Endangered Species Act. Idaho could help bears along by having a mandatory bear identification program for all bear hunters and by expanding the kind of community “bear proofing” programs that have been so successful in eastern Idaho.

But these program cost money.

Tony Hafla of the Safari Club said his group has worked hard on bear recovery and they want a hunting season, which he said was biologically justified. He envisions at least one bear hunt auctioned off for thousands of dollars which could pay for research and education.

“Having a hunting season will hopefully change the bears’ attitude toward humans,” he said.

But critics say dead bears don’t pass any lessons to the next generation, and trophy hunting is opposed by a coalition of American Indian tribes.

“(It) would not only represent a threat to tribal sovereignty, but also contravene the American Indian Religious Freedom Act,” the Shoshone-Bannock Tribes business council said in a 2016 news release.

“The grizzly is a spiritual animal, intricately tied to the ceremonies and practices of the Shoshone and Bannock peoples,” it said.

Grizzly management act could remove animal from list in Yellowstone

Earlier this month, the U.S. Senate Committee on Environment and Public Works held a hearing on S.614, the Grizzly Bear State Management Act, introduced by Republican Sen. Mike Enzi of Wyoming and co-spnsored by Risch and Crapo. It would remove the grizzly bear from the endangered species list in the greater Yellowstone ecosystem and place management in state control.

Meanwhile the U.S. Fish and Wildlife Service is expected to complete a five-year status review of the grizzly bear throughout the 48 states by early 2021. Officials will examine the issues raised in the federal court’s decision, said Hilary Cooley, U.S. Fish and Wildlife Grizzly Bear Recovery coordinator in Missoula, Montana.

But the agency has not decided which way to go forward. Still, as more grizzly bears spread out from the core habitats, conflicts with humans will grow, especially on private land.

“You have to provide a little relief sometime,” she said.

An Idaho hunter survived an attack by what he described to officials as a grizzly bear.

In this Sept. 25, 2013 file photo, a grizzly bear cub searches for fallen fruit beneath an apple tree a few miles from the north entrance to Yellowstone National Park in Gardiner, Mont.