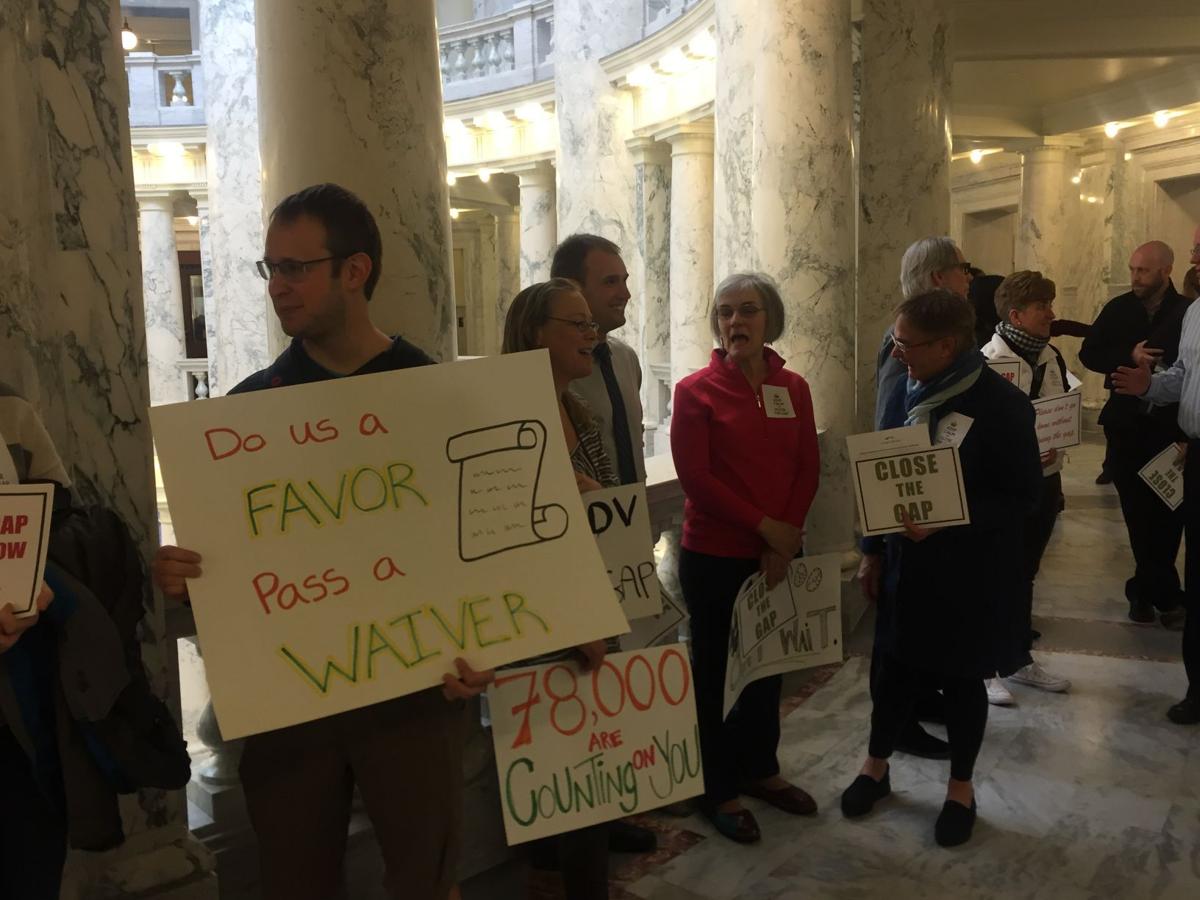 Supporters of Medicaid expansion rally outside the Idaho House chambers on March 22. 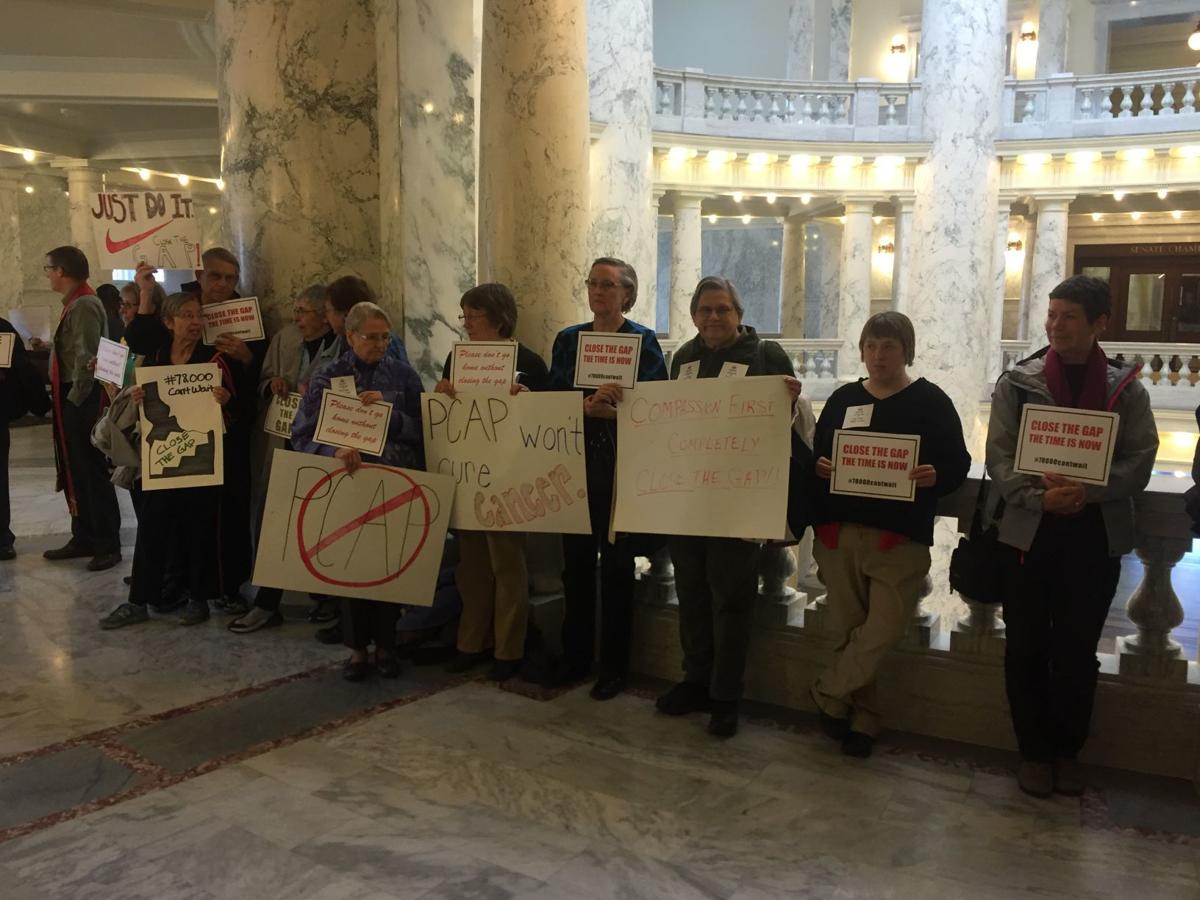 Supporters of Medicaid expansion rally outside the Idaho House chambers on Tuesday, March 22, 2016.

BOISE • The Idaho House on Wednesday rushed through two bills to do something about health care for the poor before lawmakers go home.

One would create an interim committee to study and make recommendations on health care for the estimated 78,000 uninsured Idahoans in the “coverage gap,” the aim being to come up with a managed care plan that would get a Medicaid expansion waiver and thus get federal funds to pay for the state-designed program.

Whatever they recommend, though, wouldn’t be implemented until the 2017 session, assuming the study group is done by then — the resolution says the Department of Health and Welfare would need legislative approval before applying for a waiver.

The second would give $5 million a year, for the next two years, in grants to the community health clinics that take care of many of the uninsured now, plus spend $400,000 over those two years to gather data on the gap population.

The two measures are a far cry from Medicaid expansion, which has been discussed for the past several years but has met with Republican opposition; from telling the director of Health and Welfare to apply for a waiver now, which was discussed last week but never introduced as a bill; or from the plan Gov. C.L. “Butch” Otter proposed at the beginning of the session but which lawmakers nixed.

Otter’s proposal would have pumped about $30 million into the state’s community health centers by devising primary care plans for the gap population, who don’t qualify for Medicaid but don’t make enough to get tax credits to pay for insurance on the state exchange.

The House Health and Welfare Committee printed both bills Wednesday morning and sent them right to the full House, skipping a public hearing. The House passed them that afternoon.

They still need to pass the Senate to become law. Senate Health and Welfare is scheduled to meet at 8:15 a.m. Thursday.

The Democrats and some more conservative Republicans voted no. Rep. Ron Nate, R-Rexburg, said many lawmakers were elected campaigning against the Affordable Care Act.

“This is getting us right up to the final step of Idaho adopting every single (part) of Obamacare,” he said.

Rep. Lynn Luker, R-Boise, who helped negotiate the bills and introduced both of them, said that while there have been studies, lawmakers have not yet had a chance to weigh in.

“I recognize that there are strong feelings here,” he said. “But one thing we do not want to do is put our state upside down financially. And that is one of the things that has happened in states that have expanded traditional Medicaid.”

Health and Welfare Committee Chairman Rep. Fred Wood, R-Burley, said the only way Medicaid expansion would ever happen in Idaho would be when a system is devised that can control costs and measure health outcomes.

Rep. Pete Nielsen, R-Mountain Home, who voted no, said it is not the government’s job to take from the “haves” to provide for the “have nots.” In making his point, Nielsen — who, like many other legislators who are farmers, has gotten thousands in commodity subsidies over the years — quoted President Grover Cleveland’s 1887 message vetoing a bill to give aid to farmers in Texas struggling with a drought.

Legislature Down to the Wire on Medicaid Plan

BOISE • A proposal will be introduced Monday to address the estimated 78,000 Idahoans who don’t qualify for Medicaid but also don’t make enoug…

ALBION • An estimated 78,000 Idahoans fall into the “coverage gap” where they don’t qualify for Medicaid but don’t make enough to qualify for …

BOISE • A House committee has rejected a proposal to fund primary care for the uninsured, raising questions on the future of the governor’s plan.

BOISE • The governor’s plan to extend primary care coverage to the poor is in the hands of lawmakers.

Supporters of Medicaid expansion rally outside the Idaho House chambers on March 22.

Supporters of Medicaid expansion rally outside the Idaho House chambers on Tuesday, March 22, 2016.