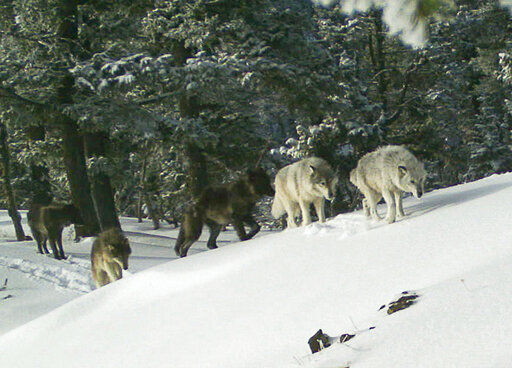 In this Feb. 1, 2017, file image provided the Oregon Department of Fish and Wildlife, a wolf pack is captured by a remote camera in Hells Canyon National Recreation Area in northeast Oregon near the Idaho border.

In this Sept. 26, 2018, file photo, provided by the National Park Service, a 4-year-old female gray wolf emerges from her cage as it is released at Isle Royale National Park in Michigan. 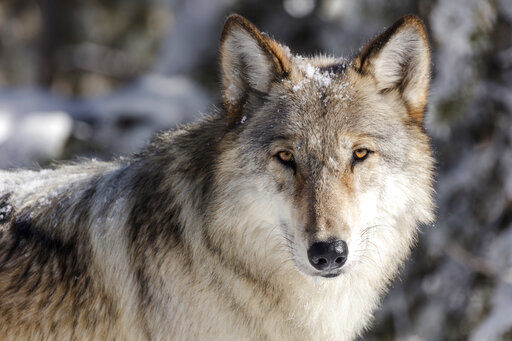 BILLINGS, Mont. (AP) — Wildlife advocates pressed the Biden administration on Wednesday to revive federal protections for gray wolves across the Northern Rockies after Republican lawmakers in Idaho and Montana made it much easier to kill the predators.

The Center for Biological Diversity, Humane Society and Sierra Club filed a legal petition asking Interior Secretary Deb Haaland to use her emergency authority to return thousands of wolves in the region to protection under the Endangered Species Act.

Republican lawmakers pushed through legislation in recent weeks that would allow hunters and trappers to kill unlimited numbers of wolves in Idaho and Montana using aggressive tactics such as shooting them from ATVs and helicopters, hunting with night-vision scopes and setting lethal snares that some consider inhumane. Idaho’s law also allows the state to hire private contractors to kill wolves.

Wolves in the region lost federal endangered protections in 2011 under an act of Congress after the species had rebounded from widespread extermination last century.

Hundreds of wolves are now killed annually by hunters and trappers in Montana, Idaho and Wyoming. Yet the population remains strong — more than 3,000 animals, according to wildlife officials — because the wolves breed so successfully and can roam huge areas of wild land in the sparsely populated Northern Rockies.

The new laws had been opposed by some former wildlife officials and reflect an increasingly partisan approach to predator management in state houses that are dominated by Republicans. Supporters of restoring protections say the changes will tip the scales and drive down wolf numbers to unsustainable levels, while also threatening packs in nearby states that have interconnected populations.

They argue the changes violated the terms that allowed state management of wolves, and want Haaland to act before the looser hunting rules start going into effect in Idaho on July 1.

“The (U.S. Fish and Wildlife) Service was very clear that a change in state law that allowed for unregulated, unlimited take of wolves would set off the alarm,” said attorney Nicholas Arrivo with the Humane Society of the United States. “This is essentially an attempt to push the population down to the very minimum.”

Wednesday’s petition seeks to restore protections across all or portions of at least six states — Montana, Idaho, Wyoming, eastern Washington, eastern Oregon and a small area of northern Utah. It steps up pressure on the administration over wolf populations that were declared recovered when President Joe Biden served as vice president under former President Barack Obama.

Biden also inherited a legal fight in the Midwest over the Trump administration’s removal of protections for wolves in Minnesota, Wisconsin and Michigan.

Idaho lawmakers who sponsored a law signed earlier this month by Republican Gov. Brad Little said they wanted to reduce the state’s 1,500 wolves to the allowed minimum of 150 to protect livestock and boost deer and elk herds.

In Montana, Republican Gov. Greg Gianforte — who received a warning this year for trapping a wolf without taking a required certification class in violation of state rules — signed a law last month requiring wolf numbers to be reduced, although not below 15 breeding pairs of the animals.

Montana U.S. Sen. Jon Tester, who offered the 2011 legislation that put wolves under state control, declined to comment directly on the new laws but said science needs to drive decisions on wolves.

“It is up to state officials in Montana to continue to ensure that population numbers remain adequate so wolves don’t get relisted,” the Democratic lawmaker said in a statement.

In Idaho, hunting rules already had been incrementally loosened over the past decade without causing a huge spike in the number of wolves killed, said Idaho Fish and Game spokesperson Roger Phillips. Hunters and trappers killed about 500 wolves in the state in 2020.

Idaho officials will be able to closely track how many are killed under the new rules through a mandatory reporting system. However, if problems emerge, any changes would have to be made by lawmakers after they took away wolf management decisions from state wildlife commissioners, Phillips said.

The Fish and Wildlife Service has long contended it’s not necessary for wolves to be in every place they once inhabited to be considered recovered. Spokesperson Vanessa Kauffman would not say if federal officials were looking at the new laws. The agency has 90 days to decide if protections may be warranted, but has not always met deadlines with previous petitions.

Wolves were wiped out across most of the U.S. by the 1930s under government-sponsored poisoning and trapping campaigns. They were reintroduced from Canada into the Northern Rockies in the 1990s and expanded over the past two decades into parts of Oregon, Washington and California.

The population in the Midwest has grown to some 4,400 wolves. In Colorado, voters last year passed a measure requiring the state to begin reintroducing wolves in coming years.

The Twin Falls City Council approved a request to annex a 12-acre lot at the intersection of Harrison Street and Clinton Drive into the city during its meeting on Monday.

The oldest caller to the Idaho Suicide Prevention Hotline since it launched in 2012 was 92 years old, while the youngest was just 7 years old. And as the COVID-19 pandemic has gripped the state, Idahoans of all ages have needed more mental health resources to get by.

Idaho to get $30 million to reduce COVID health disparities

At one of Camas County's cemeteries the only clue to where people are buried is a piece of paper with hand-drawn lines. Officials are trying to fix years of problems there, but so far only have a temporary source of money.

Idaho could finish the fiscal year at the end of June with a record budget surplus of $800 million, Gov. Brad Little announced Wednesday.

A suction-dredge gold miner who operated in an Idaho river containing federally protected salmon and steelhead without required permits is facing what could be substantial fines.

“It’s not as cordial as I wish it was,” Little said when asked to characterize his relationship with the lieutenant governor.

Another candidate announces run for Idaho governor. Canyon voters may recognize the name

Melissa Sue Robinson, a transgender woman and advocate, announced in a news release that she intends to run for the Democratic nomination for Idaho governor in 2022.

Reclaim Idaho can now gather signatures for a K-12 initiative. But there’s a catch.

Reclaim Idaho volunteers received the go-ahead from the state to begin collecting signatures on a new education funding initiative they hope to get on Idaho voters’ ballots in 2022.

In this Feb. 1, 2017, file image provided the Oregon Department of Fish and Wildlife, a wolf pack is captured by a remote camera in Hells Canyon National Recreation Area in northeast Oregon near the Idaho border.

In this Sept. 26, 2018, file photo, provided by the National Park Service, a 4-year-old female gray wolf emerges from her cage as it is released at Isle Royale National Park in Michigan.