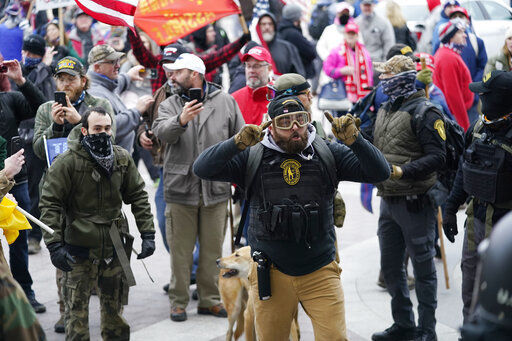 In this Jan. 6, 2021, file photo, Trump supporters gather outside the Capitol in Washington. As rioters converged on the U.S. Capitol building, the grounds normally hailed as the seat of American democracy became a melting pot of extremist groups. 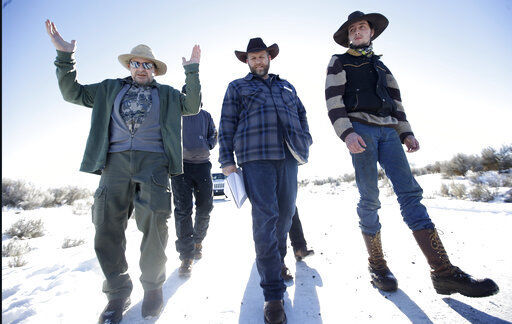 In this Jan 8, 2016, file photo, Burns resident Steve Atkins, left, talks with Ammon Bundy, center, one of the sons of Nevada rancher Cliven Bundy, following a news conference at Malheur National Wildlife Refuge near Burns, Ore. Cliven and his sons Ryan and Ammon have engaged in armed standoffs with the federal government, first in a fight over grazing permits on federal land in Nevada in 2014, and then in a 40-day occupation of the Malheur Wildlife Refuge in Oregon in 2016. Those standoffs drew the sympathies of some Western ranchers and farmers who feared they were losing the ability to prosper financially.

Experts say it was the culmination of years of increasing radicalization and partisanship, combined with a growing fascination with paramilitary groups and a global pandemic. And they warn that the armed insurrection that left five people dead and shook the country could be just the beginning.

“We look at it like a conveyor belt of radicalization,” said Devin Burghart, executive director of the Institute for Research & Education on Human Rights. “Once they step on that conveyor belt, they’re inundated with propaganda that moves them along that path until they’re willing to take up arms.”

Photographs and video of the Capitol siege showed people wearing attire with symbols associated with the anti-government Three Percenters movement and the Oath Keepers, a loosely organized group of right-wing extremists.

Many of those who stormed the Capitol were wearing clothes or holding signs adorned with symbols of the QAnon conspiracy theory, which centers on the baseless belief that Trump is waging a secret campaign against the “deep state” and a cabal of sex-trafficking cannibals. One of the intruders was wearing a “Camp Auschwitz” sweatshirt, a reference to the Nazi death camp.

Those who monitor online chatter say the threat of more violence by far-right fringe groups hasn’t abated, though it has been tougher to track since the social media platform Parler, a haven for right-wing extremists, was booted off the internet.

“We’re certainly not out of the woods yet. I’m afraid that we’re going to have to be prepared for some worst-case scenarios for a while,” said Amy Cooter, a senior lecturer in sociology at Vanderbilt University who studies U.S. militia groups.

The FBI is warning of plans for armed protests at all 50 state capitals and in Washington in the days leading up to President-elect Joe Biden’s inauguration next Wednesday. Cooter believes smaller gatherings at state capitals are a greater threat than a large, centrally organized event in Washington, given the heightened security there.

How many extremists are out there is unclear. Individual fringe groups tend to be small, with the largest claiming hundreds of members, but countless others have been swept up in the fury of late.

To understand the mix of extremists in the Capitol melee, it helps to look at history.

Much of the modern militia movement was a reaction to the push for tougher gun control laws in the 1990s. An 11-day standoff that left three people dead on Idaho’s Ruby Ridge in 1992 galvanized the movement, as did the disaster in Waco, Texas, the following year, when 76 people died in a fire after a 51-day standoff at the Branch Davidian cult compound.

A decade later, Cliven Bundy and his sons Ryan and Ammon Bundy engaged in armed standoffs with the federal government, first in a fight over grazing rights on federal land in Nevada in 2014, then in a 40-day occupation of a national wildlife refuge in Oregon in 2016. Those standoffs drew the sympathies of some Western ranchers and farmers who feared they were losing the ability to prosper financially.

Meanwhile, America’s white supremacy movement — as old as the country itself and energized by the civil rights movement of the 1960s — used every opportunity to stoke racism and increase recruitment. Within the last two decades, nationalists and white supremacists were especially successful in leveraging anti-immigration sentiment and the backlash over Barack Obama’s election as the nation’s first black president in 2008.

Some who follow such movements say the coronavirus pandemic provided the perfect recruitment opportunity.

“That was the moment that sent a message nationwide that it was OK to take an insurrectionist posture toward COVID guidelines — and from that moment you saw this take hold across the country,” said Burghart, whose organization published an October report on the People’s Rights network.

While previously those upset about COVID-19 rules would complain online, suddenly individuals were defying authorities by opening their gyms or refusing to wear masks in very confrontational ways. For these individuals, social media accelerated a radicalization process that normally takes years into just a few months, fueled by the powerlessness many felt amid COVID-19 shutdowns.

“You had all of these kind of small interventions to try to fight against any kind of common-sense health restrictions,” Burghart said. “And in that moment you saw, simultaneously, militia activists getting involved in the COVID struggle and COVID insurrectionists taking up the militia posture and wanting to get involved with militia groups.”

The danger could intensify. The Capitol insurrection both further normalized the idea of violent government overthrow and allowed extremist groups to network with a broader population, said Lindsay Schubiner, an expert in extremism with the Western States Center.

As those groups continue to train and expand — many already offer instruction in weapons, first aid, food storage and ham radios — the risk of “lone wolf” actions also increases, she said, with members taking matters into their own hands when they feel their group has not gone far enough.

Stewart Rhodes, an Army veteran who founded the Oath Keepers in 2009, had been saying for weeks around the election that his group was preparing for a civil war and was ready to take orders from Trump. The group recruits current and former law enforcement officers and military personnel.

During a Nov. 10 appearance on far-right conspiracy theorist Alex Jones’ Infowars show, Rhodes said he had “good men on the ground already” in the Washington area who were “armed, prepared to go in if the president calls us up.”

“In case they attempt to remove the president illegally, we will step in and stop it,” he said.

Users on militia forums cheered on the Trump supporters who stormed the Capitol and hailed them as patriots, according to a review of social media posts by the Anti-Defamation League’s Center on Extremism. Many saw the attack as a call to arms.

Authorities have arrested more than 100 people on charges linked to the Capitol siege, but court documents don’t publicly identify any of them as members of a militia-style group, according to an Associated Press review of records.

Less than a week after the riot, several armed men in tactical gear with “Texas Militia” labels on their combat fatigues gathered at the Texas state Capitol as lawmakers returned to work for a new legislative session. Texas GOP chairman Allen West posed with the group for a photo and shared the picture on the party’s Twitter account.

The gathering at the Texas statehouse in Austin came the same day President Trump flew to the southern border in Alamo, Texas, where he took no responsibility for his part in fomenting the violent insurrection in Washington, D.C. “People thought that what I said was totally appropriate,” Trump said.

Stopping extremist groups may be impossible, but pushing those groups further to the political margins is possible, Schubiner said.

“Everyone who believes in inclusive democracy and does not believe in political violence needs to come out and say so strongly, and then back that up with actions,” she said.

This story has been corrected to show that the “Texas Militia” group gathered at the Statehouse in Auston while Trump was at the Texas border. Flaccus reported from Portland, Oregon and Kunzelman reported from College Park, Maryland. Associated Press writer Paul Weber in Austin, Texas contributed to this report.

In this Jan. 6, 2021, file photo, Trump supporters gather outside the Capitol in Washington. As rioters converged on the U.S. Capitol building, the grounds normally hailed as the seat of American democracy became a melting pot of extremist groups.

In this Jan 8, 2016, file photo, Burns resident Steve Atkins, left, talks with Ammon Bundy, center, one of the sons of Nevada rancher Cliven Bundy, following a news conference at Malheur National Wildlife Refuge near Burns, Ore. Cliven and his sons Ryan and Ammon have engaged in armed standoffs with the federal government, first in a fight over grazing permits on federal land in Nevada in 2014, and then in a 40-day occupation of the Malheur Wildlife Refuge in Oregon in 2016. Those standoffs drew the sympathies of some Western ranchers and farmers who feared they were losing the ability to prosper financially.