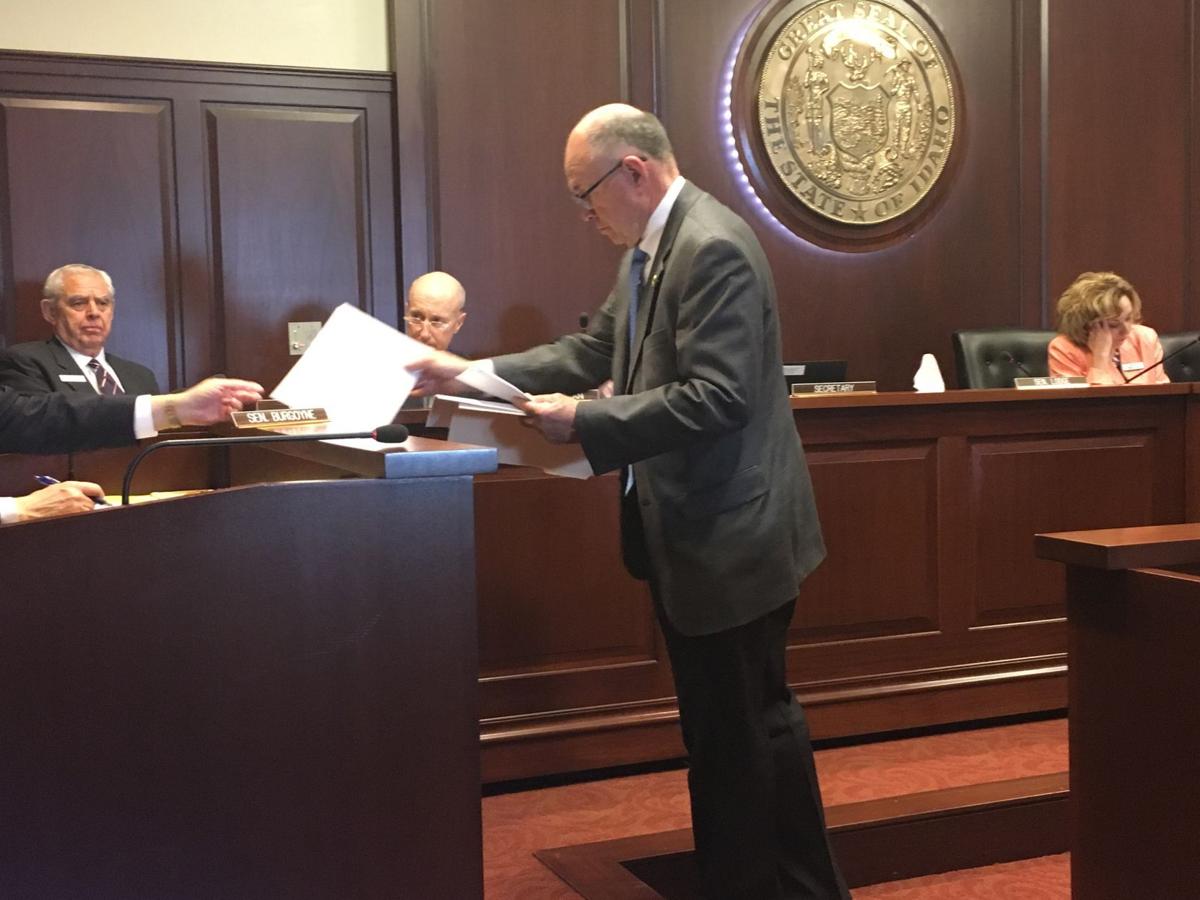 Sen. Chuck Winder, R-Boise, passes out to senators on the Judiciary and Rules Committee copies of a bill to increase transportation funding. It passed committee Monday and the full Senate is expected to vote on it Tuesday. 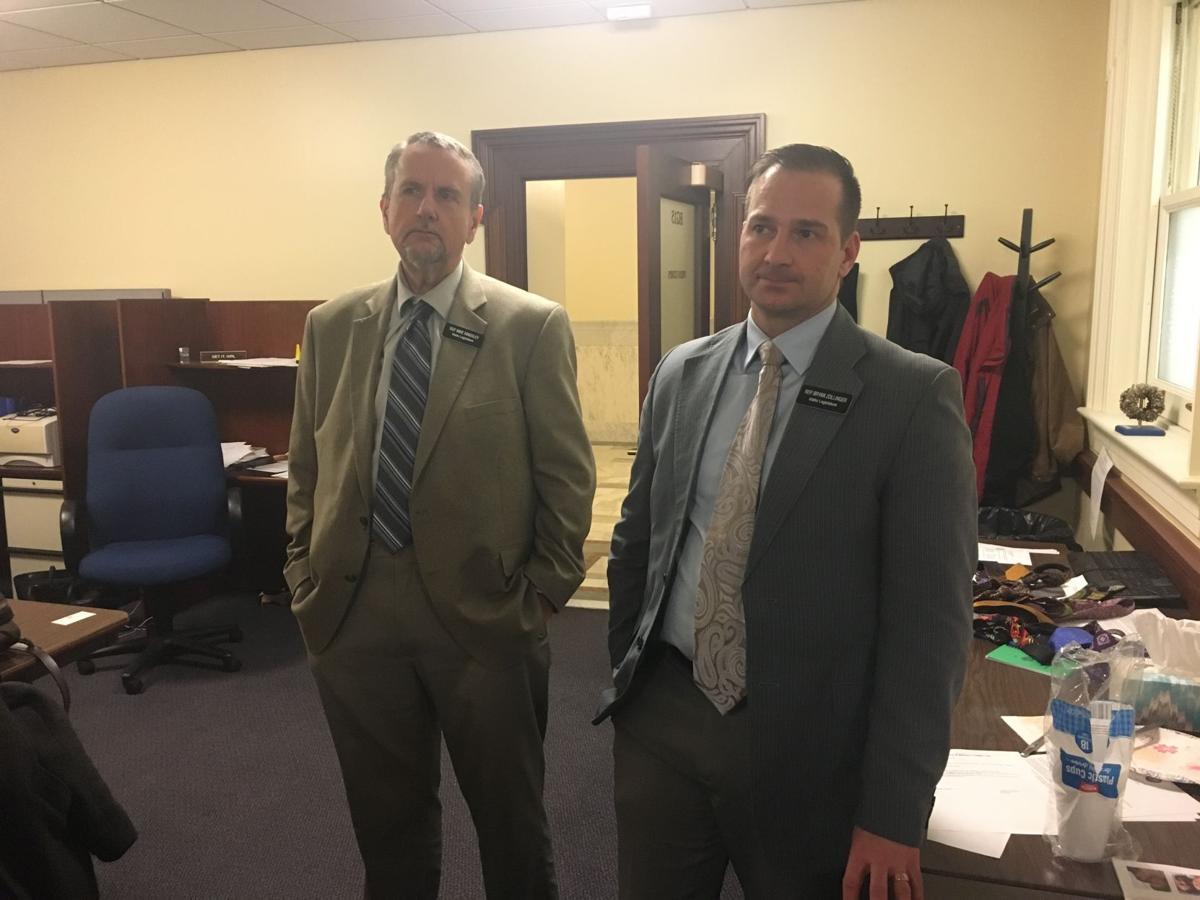 Reps. Mike Kingsley, R-Lewiston, and Bryan Zollinger, R-Idaho Falls, talk to reporters March 27 about their plans to form an Idaho Freedom Caucus to help to advance more conservative ideas in the Legislature.

BOISE — The Idaho Legislature took major steps toward ending the session Monday by sending a bill repealing the sales tax on groceries to the governor’s desk and introducing a new transportation funding bill.

Legislators had hoped to adjourn Friday but extended the session into this week as several major pieces of business were still undone. It is possible the Legislature could wrap up for the year on Tuesday.

At the moment, repealing the 6 percent sales tax on groceries and the accompanying grocery tax credit is the only legislation cutting taxes, a major goal of many Republicans heading into this year’s session. Another bill that would cut income taxes and also cut the unemployment insurance tax employers pay is being held in the House for now.

The repeal bill originated in and passed the House as an even bigger income tax cut, only for the Senate to amend it into an entirely new bill repealing the grocery sales tax. Monday it passed out of the House Revenue and Taxation Committee unanimously, although a couple of lawmakers who voted in favor in committee voted against it when it hit the House floor.

“The important part to me here is it would provide some real tax relief,” said Rep. Stephen Hartgen, R-Twin Falls, who is on the committee.

Hartgen noted that with the legislative session drawing to a close, “this may be our only opportunity to provide some significant tax relief.”

The vote split both the Democratic and Republican caucuses — several Magic Valley Republicans voted against it. Rep. Fred Wood, R-Burley, said his constituents have told him they are more interested in funding infrastructure repair than tax cuts, and he worries the lost revenue could mean less money for transportation in the future.

“Look at old Highway 30,” he said. “You can’t even drive trucks down old Highway 30 between Twin Falls and Burley anymore. There are too many potholes. That has to be fixed.”

Gov. C.L. “Butch” Otter has said he opposes repealing the sales tax on groceries, although he hasn’t explicitly said he would veto the bill.

Leadership in both chambers have said they don’t want to end the session without taking some major steps to increase road funding, and Monday afternoon the Senate rushed through committee a bill that would authorize $300 million in bonds that the state would repay with federal highway payments. Much of this would likely be spent on repairing and expanding Interstate 84 in Canyon County.

It would also extend, for another two years, the “surplus eliminator” that directs some excess state revenues into transportation, with 60 percent of that money going to the state and 40 percent to local governments, and it would create a Transportation Congestion and Expansion Mitigation Fund, which would fund projects to expand the state’s road system and would be paid for with 1 percent of the state’s sales tax revenue (about $15 million a year) plus some cigarette tax monies.

The bill was printed Monday afternoon and then taken up by the Senate Transportation Committee, which sent it to the full Senate on a 5-4 vote.

Also Monday, freshmen Reps. Bryan Zollinger, R-Idaho Falls, and Mike Kingsley, R-Lewiston, held the first meeting of the Idaho Freedom Caucus, an organization they hope will be a vehicle to advance more conservative bills that have sometimes struggled to get a hearing from leadership.

“We love what they’re doing in Washington, D.C., with their Freedom Caucus,” Kingsley said, referring to the House Freedom Caucus that has won major battles with the congressional GOP leadership in recent years, most recently helping scuttle the American Health Care Act. “Even though they’re not huge, they’re able to make some impact.”

Kingsley said uniting and deciding as a group which ideas they would like to push would give them more clout.

“We want it to be a sounding board for conservative ideas,” Zollinger told the group.

About 20 Republican lawmakers attended, including some who have clashed with leadership over the course of this session. A few people at the meeting didn’t sound like they were on board, though. Rep. Janet Trujillo, R-Idaho Falls, said she worried the group would split the party even more.

“I guess my fear in doing something like this ... is that what we are doing is dividing our caucus,” she said.

House Speaker Scott Bedke, R-Oakley, who attended the meeting and who has often been at odds with the farther-right wing of his caucus, spoke at length about his own frustrations as a younger legislator when he couldn’t wield the influence he thought he should. He recalled being a member of a group called the “6 percenters,” because they voted against any budget that hiked spending more than six percent.

“Your concerns have been heard and like I’ve told several of you ... in any organization you end up developing sacred cows through the years,” he said. “And it’s only fitting and proper that every now and then you skewer a cow and barbecue it.”

Bedke said their frustrations are valid and indicated a willingness to work with them.

“We have way more that unites us than divides us and I can match my — wait for it — conservative Republican credentials with anyone in this room over time,” he said.

How they voted - grocery tax repeal

With House stalled, end of legislative session pushed back to next week

BOISE — The Idaho Legislature’s session, which leadership had hoped would end on Friday, will continue into next week.

Sen. Chuck Winder, R-Boise, passes out to senators on the Judiciary and Rules Committee copies of a bill to increase transportation funding. It passed committee Monday and the full Senate is expected to vote on it Tuesday.

Reps. Mike Kingsley, R-Lewiston, and Bryan Zollinger, R-Idaho Falls, talk to reporters March 27 about their plans to form an Idaho Freedom Caucus to help to advance more conservative ideas in the Legislature.