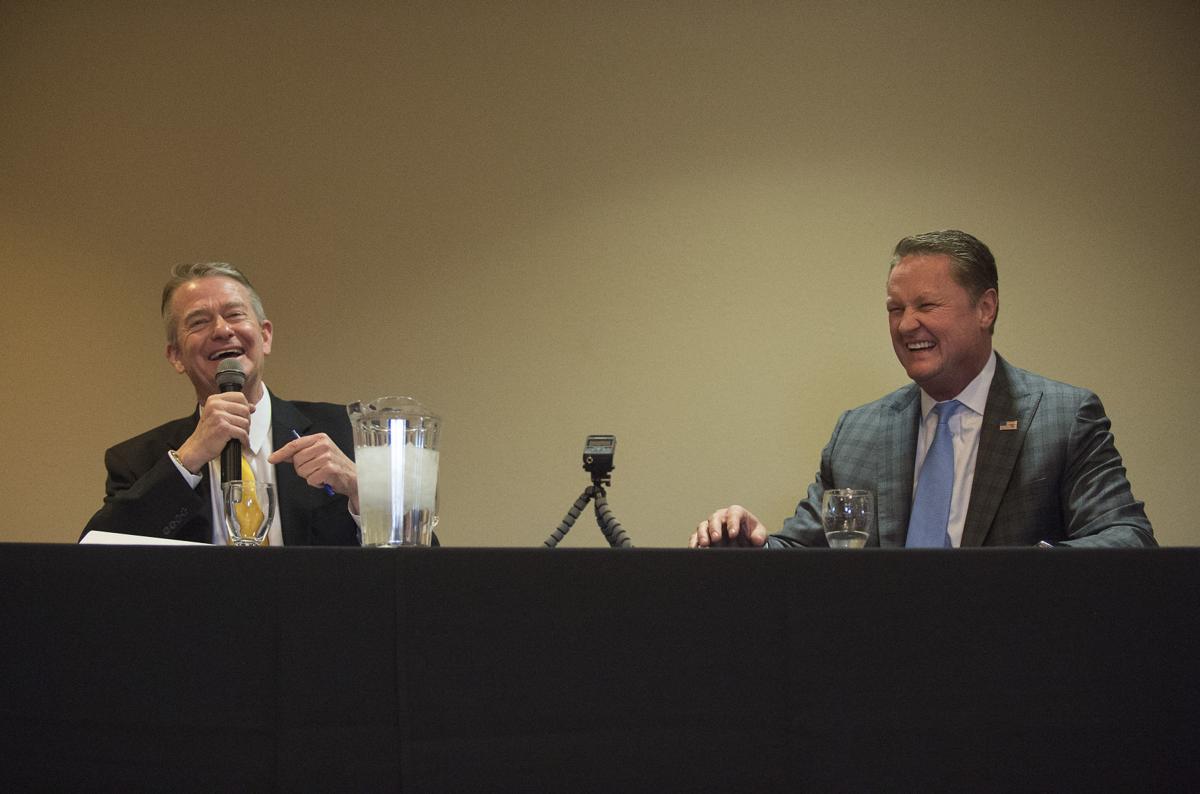 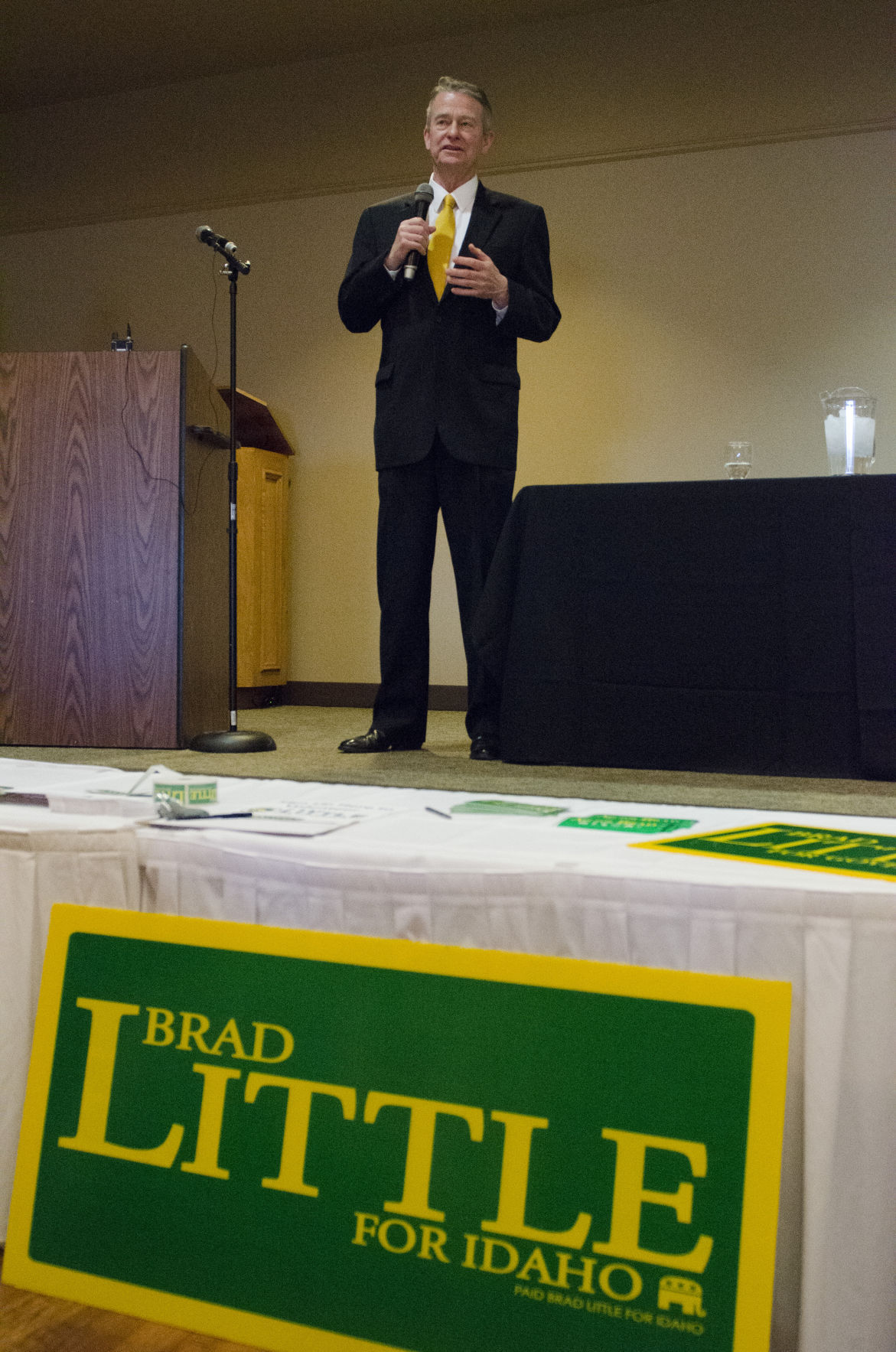 Republican candidate Lt. Governor Brad Little introduces himself during a candidate forum with Tommy Ahlquist (not shown) presented by the Twin Falls City Club on Monday, Jan. 15, 2018, in Twin Falls. 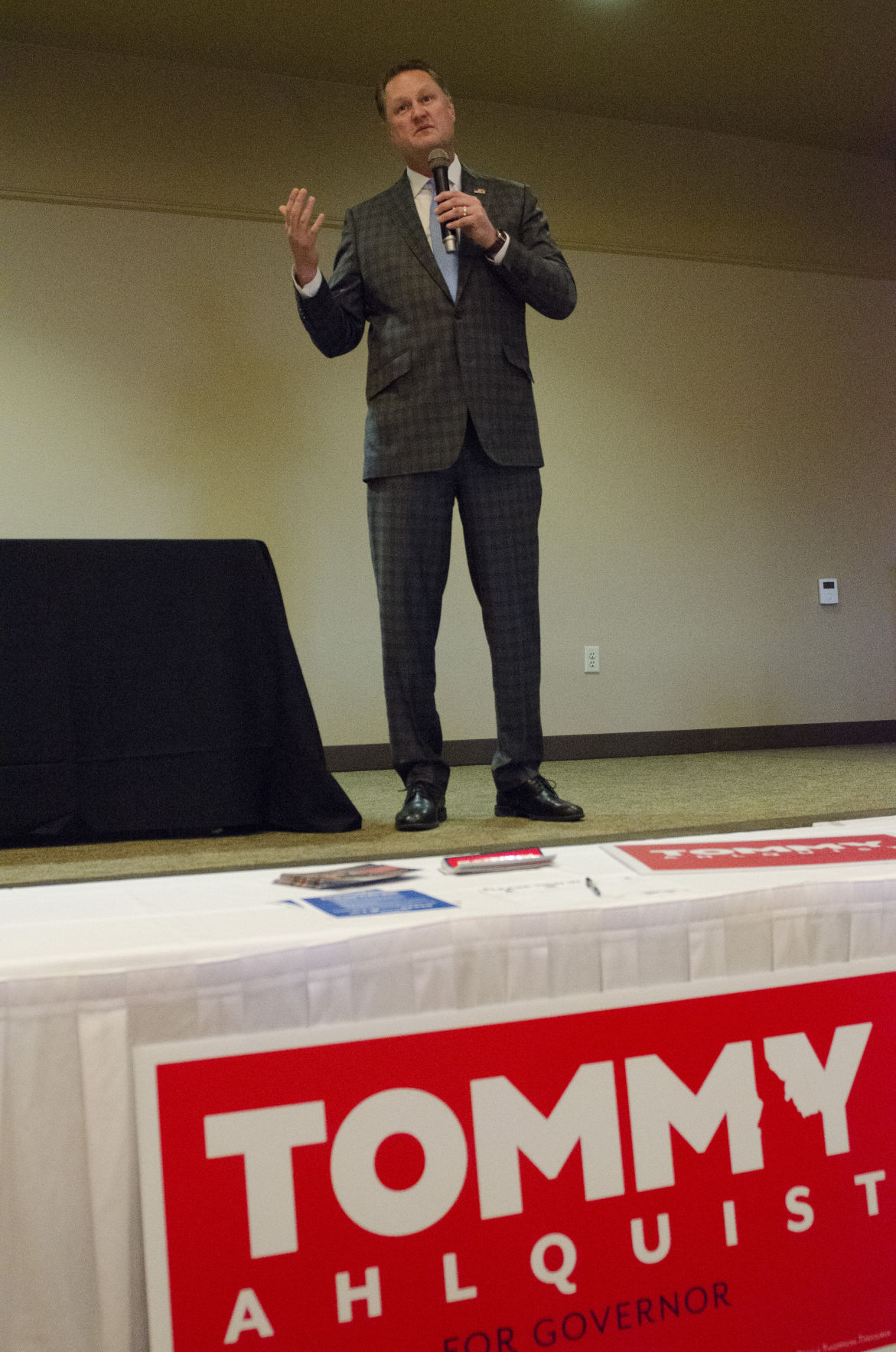 Lt. Gov Brad Little and business developer Tommy Ahlquist responded to questions from the audience on topics including health care, education and development in south-central Idaho. Absent from the event was U.S. Rep. Raul Labrador, who was invited by organizers but did not attend.

Though the two candidates espoused similar stances on many of the issues discussed, Little emphasized his experience in office and familiarity with the Magic Valley area, while Ahlquist stressed the need for fresh faces and perspectives in government.

The forum was held at Canyon Crest Dining and Event Center and was moderated by Times-News publisher Travis Quast.

Both candidates said they would support a repeal of Idaho’s 6 percent sales tax on groceries, breaking from current Gov. C.L. “Butch” Otter, who vetoed legislation that would get rid of the grocery tax at the end of the last legislative session.

Little predicted that if similar legislation were to pass early on in the 2018 session, there would be enough votes in the legislature to override another veto.

Ahlquist said he would also like to see cuts in personal income tax, ideally dropping the 7.4 percent paid in the highest bracket down to around 5 percent.

“In this state, big business will be taken care of every time, rest assured,” Ahlquist said. “But it’s the small business owners, the families, that’s who we need to focus on every single time when we look at the way that tax policy affects our people.”

Both Ahlquist and Little said they would not cut funding for education, citing the importance of education and workforce development to economic growth in the state.

While both candidates voiced support for school choice in Idaho, Little cautioned against voucher programs that would detract significantly from funding for public schools.

“To throw the baby out with the bathwater and significantly take money away from K-12 is something I would not support,” Little said.

Neither candidate expressed support for a state-run preschool program.

In describing how he would make health care more accessible to Idahoans without coverage, Little pointed in part to an executive order he and Otter signed earlier this month that would let insurance companies create new health care plans that don’t have all the requirements of the Affordable Health Care Act.

Ahlquist said that rather than expand Medicaid to cover the 78,000 Idaho residents who do not have health insurance, he would work to increase transparency and bring the cost of medicine down.

To address the Idaho’s shortage of physicians, Little said he is in favor of a residency plan that would “sprinkle doctors all over the state.”

Ahlquist spoke of a “comprehensive plan” that would include residency programs and increased utilization of broadband telemedicine.

“I will be the first to admit I suffered from Treasure Valley-itis, which is a true medical condition in Idaho, before this election,” Ahlquist said, when asked about creating a new bridge or byway over the Snake River Canyon to connect the Magic Valley to the rest of the state.

He called for a comprehensive plan to cover the maintenance of current roads and bridges in Idaho, as well as future growth: “We need a plan not just to grow, but how we’re going to fund it.”

Little described the upkeep of current bridges and roads and the potential addition of a new bridge as a “safety issue.”

“If something happens to that bridge out there, it’s going to be a big darn deal for this valley,” he said. “I predict that, knowing my friends that are legislators and my friends here in the Magic Valley, that that will be on the next list of big projects.”

When asked what the candidates would do to protect urban renewal, Little praised the Magic Valley as “the poster child for how to do it right,” while advocating for bifurcation of the program.

Ahlquist described urban renewal as a “critical tool” for the Magic Valley and the rest of the state.

“But I’d love to see a toolbox that allows us to use it more effectively,” he added. “That’s what we need to start talking about.”

Senior royals walk in the Duke of Edinburgh's funeral procession

Republican candidate Lt. Governor Brad Little introduces himself during a candidate forum with Tommy Ahlquist (not shown) presented by the Twin Falls City Club on Monday, Jan. 15, 2018, in Twin Falls.