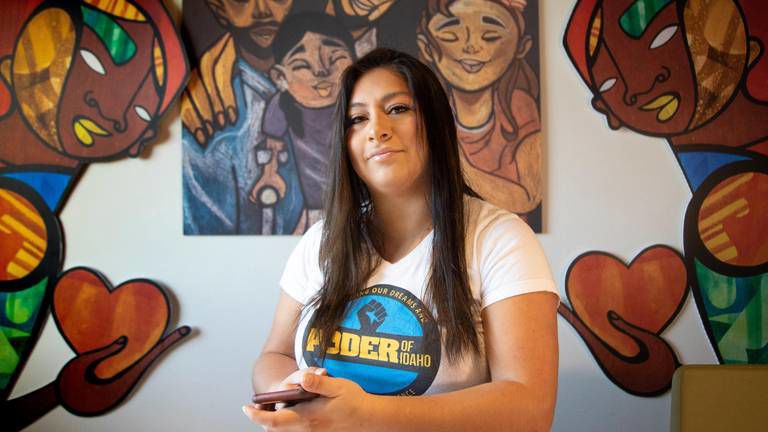 Estefania Mondragon is one of the young Idaho activists organizing a campaign that would allow undocumented Idahoans the ability to get a driver’s license. Mondragon is executive director of PODER of Idaho. 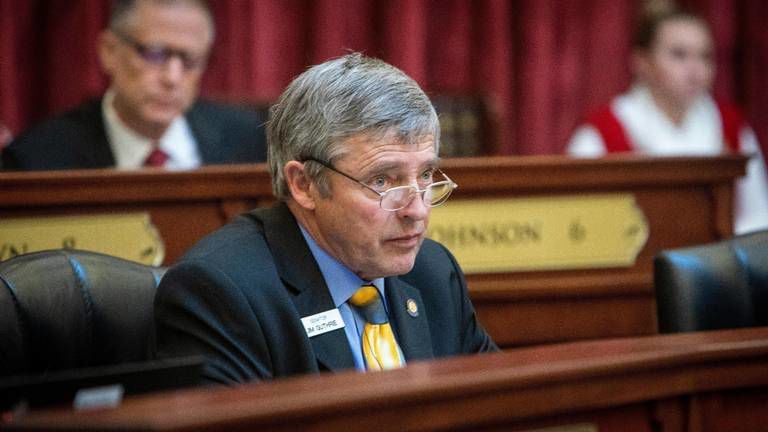 Sen. Jim Guthrie, R-McCammon, has delayed until next year his effort to create legislation allowing undocumented residents to get driver’s licenses.

BOISE — A movement to get driving privileges for undocumented Idahoans has been brewing since last summer, and it will continue despite a recent setback.

In an op-ed published in the Idaho Statesman last week, Sen. Jim Guthrie (R-McCammon) said he would not print an undocumented driver’s license bill originally planned for this year’s legislative session. Instead, Guthrie said he would sift through the wave of feedback and invite lawmakers, law enforcement and community stakeholders like construction employers and farmers to provide further input.

“As a legislator, I try to look at a problem and help craft sensible solutions,” Guthrie wrote in the Jan. 17 op-ed. “This proposal has broad bipartisan support in the political, agricultural, commercial and industrial arenas. That said, I am not oblivious to the feedback I have received which ranges across the opinion spectrum.”

While Guthrie and his working group plan to reconvene during the interim and next legislative session, a coalition of immigrant advocates rooted in rural Idaho remains busy. PODER of Idaho — a Treasure Valley-based Latino advocacy group working separately from Guthrie on the same issue — said it’s moving forward with a campaign it hopes will mobilize Idaho’s Latino and immigrant communities.

“Unfortunately, the reality for a lot of folks in our community is that they don’t have a driver’s license and they’re afraid to get pulled over by police that are working with ICE,” PODER Executive Director Estefanía Mondragon said. “Instead of protecting people in their community, they are criminalizing them for just going to the grocery store or going to pick up their kids.”

The Pew Research Center estimated Idaho had 35,000 undocumented residents in 2016. In Idaho, people have to prove legal residency in order to apply for a driver’s license, either through a Social Security number or some other form of documentation.

“Living in fear … that shouldn’t be how Idahoans need to live,” Mondragon said.

A STATEWIDE COALITION WITH RURAL ROOTS

PODER’s first community meeting at Nampa’s Hispanic Cultural Center in June was small, with community members scattered among advocates and representatives from local organizations that often interact with or help undocumented people.

Mondragon and other members of PODER wanted to know if their incipient campaign — which they were just starting to call Manejando Sin Miedo, or Driving Without Fear — was something that Idaho’s immigrant and undocumented community members wanted or needed. The answer at that early June meeting and subsequent ones across the state was yes.

In Nampa, attendees described the fear that accompanied the rhythms of everyday life, like taking kids to school or driving to work in an area with a serious shortage of public transportation. They face the difficulty of helping their children obtain official documents or set up their own lives with the threat of a traffic stop ending in deportation hanging over their heads.

Since that mid-summer meeting, PODER members have held meetings from Burley to Boise. Some, like a January meeting at Boise State University, explained how students could help organize. Others, like the meeting in Burley, had more than 70 members of the Latino community share how they would benefit from a driver’s license and their eagerness to get involved.

The news of Guthrie’s possible bill, Mondragon said, caught PODER a little by surprise. With interest and questions pouring in about the growing campaign, it had to move up planning a little more quickly. Mondragon and Ruby Mendez, another member of PODER, said they were able to build upon and learn from previous work on this issue in Idaho.

In 2014 and 2015, the Idaho Community Action Network (ICAN) launched a similar grassroots campaign, getting thousands of signatures on petitions calling for undocumented people to have access to an Idaho driver’s license. After a bill failed to be introduced, statewide buzz waned.

“It was sad to see that have to come to a halt,” said Mendez, who worked on the ICAN campaign. “But I think it really brought a lot of hope and motivation for folks. When we work here now, when we go out to the community, folks still remember that momentum and that excitement.”

Mondragon and Mendez met with Guthrie after the initial announcement of his bill.

“It was really good meeting him in person and being able to also reiterate the importance of having the Latinx voice that are a part of these conversations,” Mendez said, pointing out one of the group’s main concerns would be making sure any special driving privilege card doesn’t attract undue attention from ICE. “We’re just trying to learn where those thoughts are coming from and see if there could be common ground.”

Guthrie said he hadn’t sought to tackle such a high-profile, contentious issue like immigration and the rights of people living in the U.S. illegally. The McCammon state senator and rancher said his decision to work on the legislation was prompted by constituent concerns — particularly farmers in his district who have undocumented workforces.

“The issue found me,” Guthrie told the Statesman on Wednesday.

The legislation Guthrie hopes to revise and introduce during the 2021 legislative session wouldn’t allow undocumented people to obtain the same driver’s license as other Idahoans.

Instead, Guthrie proposed a driving privilege card similar to what Utah introduced in 2005. Card holders would have to pass the same road competency tests as other drivers, but their cards would have a large watermark and be valid only one year at a time to drivers over 18. The cards couldn’t be used to vote — a federal crime that could put even a legal permanent resident at risk for deportation — buy alcohol, purchase firearms or prove legal status or age.

Many of Idaho’s neighboring states provide driver’s licenses or other driving privileges to people who can’t prove they’re in the country legally, including California, Oregon, Washington and Utah.

Guthrie said his working group looked at Utah in particular as a model. A Utah lawmaker he spoke with over the summer said nearly 15 years after the cards were introduced there remains little opposition to the practice.

Guthrie and his working group found results, too. About 42,000 of the roughly 50,000 people with Utah cards are insured — nearly equivalent to traditional license holders. Other states had similar results. Drivers need a license in order to get insurance.

“One of the things that I’ve learned over the years in politics is we’re a very diverse country, and as Idaho grows it’s getting more and more diverse,” Guthrie said. “We just have to try to manage that reality and, again, make it as safe and as successful for all of us as we can. Sometimes that means pretty uncomfortable discussions that need to take place. But I just know that for me, ignoring something doesn’t make it go away.”

When Guthrie was still planning to introduce the bill this session, Executive Director Rick Naerebout said the Idaho Dairymen’s Association was in support of the bill.

The Idaho Dairymen’s Association has also expressed support for what Naerebout viewed as a parallel solution on the federal level — the Farm Workforce Modernization Act. In addition to allowing dairies to hire workers through the H-2A Temporary Visa program, Congressman Mike Simpson’s bill would provide farmworkers with a path to legal status.

“I think it speaks to the labor crisis that we’re in, that we’re having these types of conversations,” Naerebout told the Statesman. “Not just in dairy but again, all across agriculture, there’s a shortage of workers that want to do agricultural work. That is the underlying pressure point.”

More than 40 Idaho organizations have expressed support for the federal bill, but few besides the Idaho Dairymen’s Association have commented on the state driver’s license bill. However, Naerebout claimed most agricultural employers understand that a certain percentage of their workers are undocumented, citing U.S. Department of Labor numbers that estimate half of all U.S. farmworkers do not have legal status.

“Half of every meal you eat was brought to you by an undocumented worker,” Naerebout said. “So, it’s a little bit naive to think that this is somehow going to be a change in dynamics from what we already see. The reality is these individuals are here. This is our opportunity to help better train them and to help make sure that they have proper insurance.”

Guthrie said he was hopeful more work, research and input would result in a broad coalition supporting a solid bill for the 2021 session.

On Thursday afternoon, Mondragon and Mendez updated Latino leaders and organizers across the state about the status of the campaign now that there’s no bill moving through the Legislature. The Manejando Sin Miedo campaign is back to officially launching in March, Mondragon told the Statesman, and the team will “keep organizing, listening to the community and building relationships.”

“I think we can all empathize with and see ourselves in folks who have families and are just wanting the best for their kids and want the best for their community, too, right?” Mondragon said. “I think even the most ardent opposer to this bill could probably see themselves reflected in some of our community members’ stories around this issue. So, at least open your hearts for a second.”

Mendez said many people who were involved years ago have reached out to voice support.

One dozed. Another studied. How Idaho senators Risch, Crapo are handling impeachment

Here's how Risch and Crapo are spending their time during the impeachment trial.

A Senate committee approved a bill Monday that would create an experimental swan hunting season in Idaho.

Estefania Mondragon is one of the young Idaho activists organizing a campaign that would allow undocumented Idahoans the ability to get a driver’s license. Mondragon is executive director of PODER of Idaho.

Sen. Jim Guthrie, R-McCammon, has delayed until next year his effort to create legislation allowing undocumented residents to get driver’s licenses.