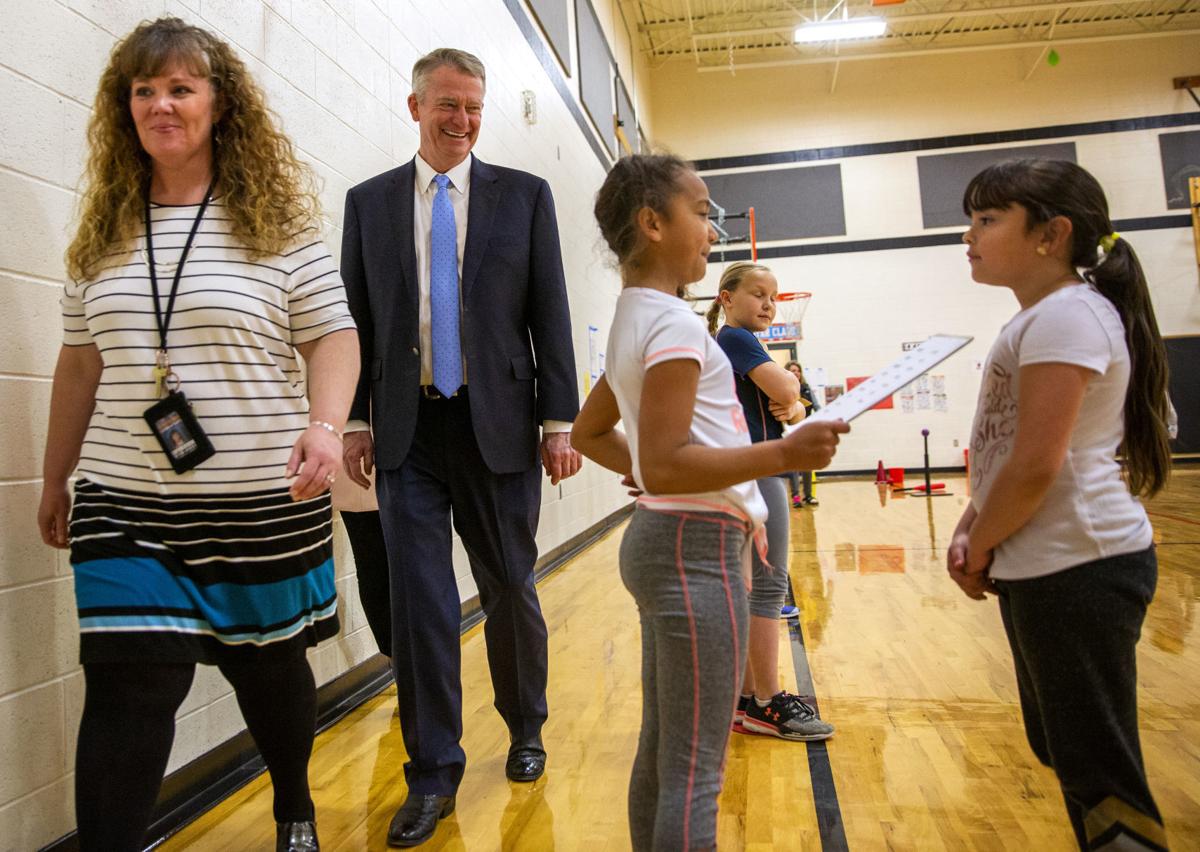 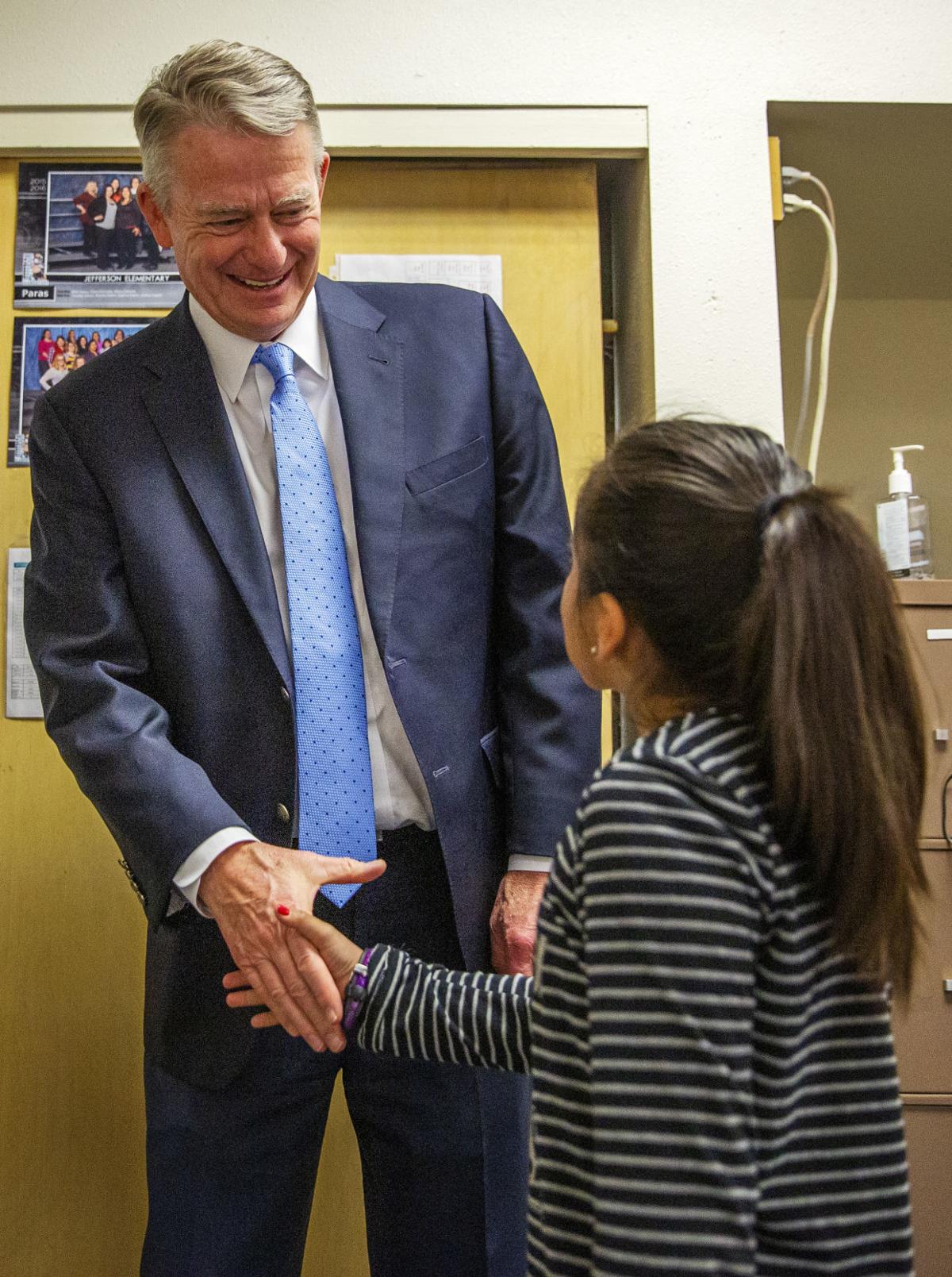 Gov. Brad Little shakes hands with students as they exit the classroom Thursday at Jefferson Elementary School in Jerome. Little toured the school as part of his post-legislative tour. 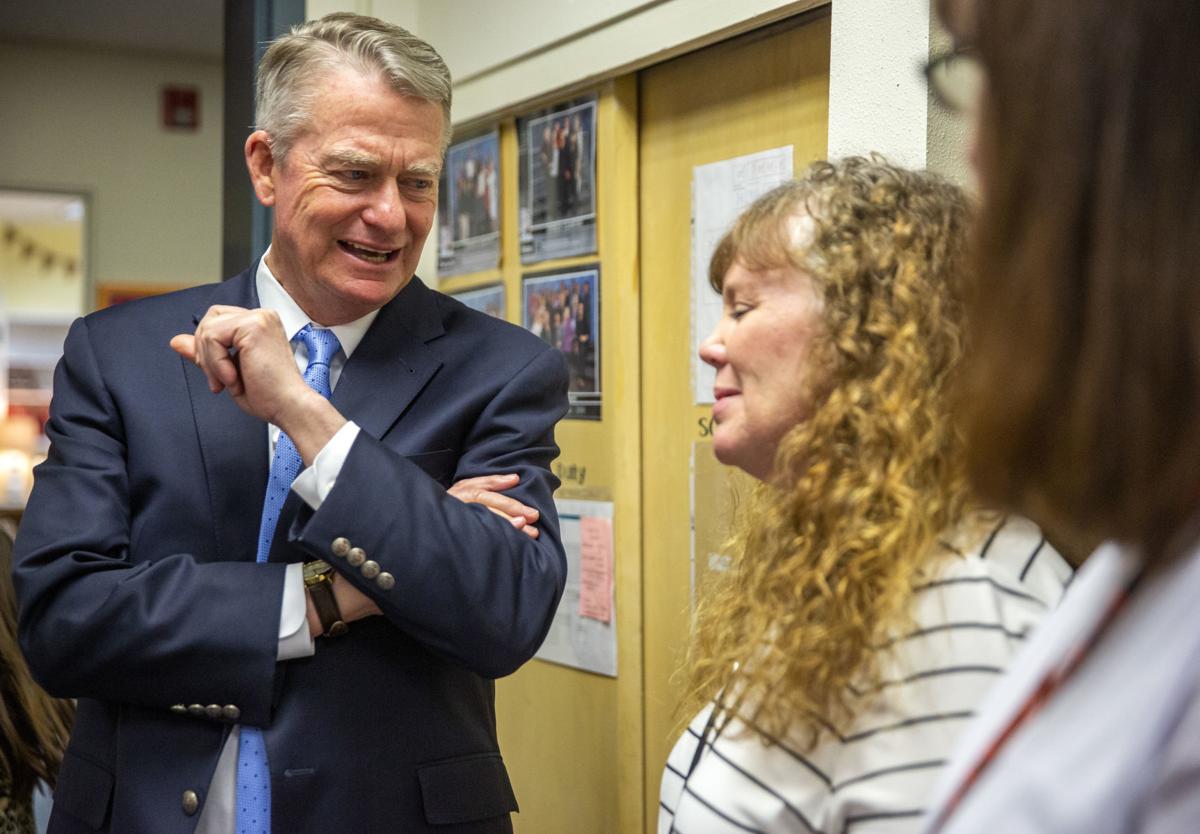 Gov. Brad Little talks to Principal Angela Brulotte on April 18 at Jefferson Elementary School in Jerome. Little toured the school as part of his post-legislative tour. 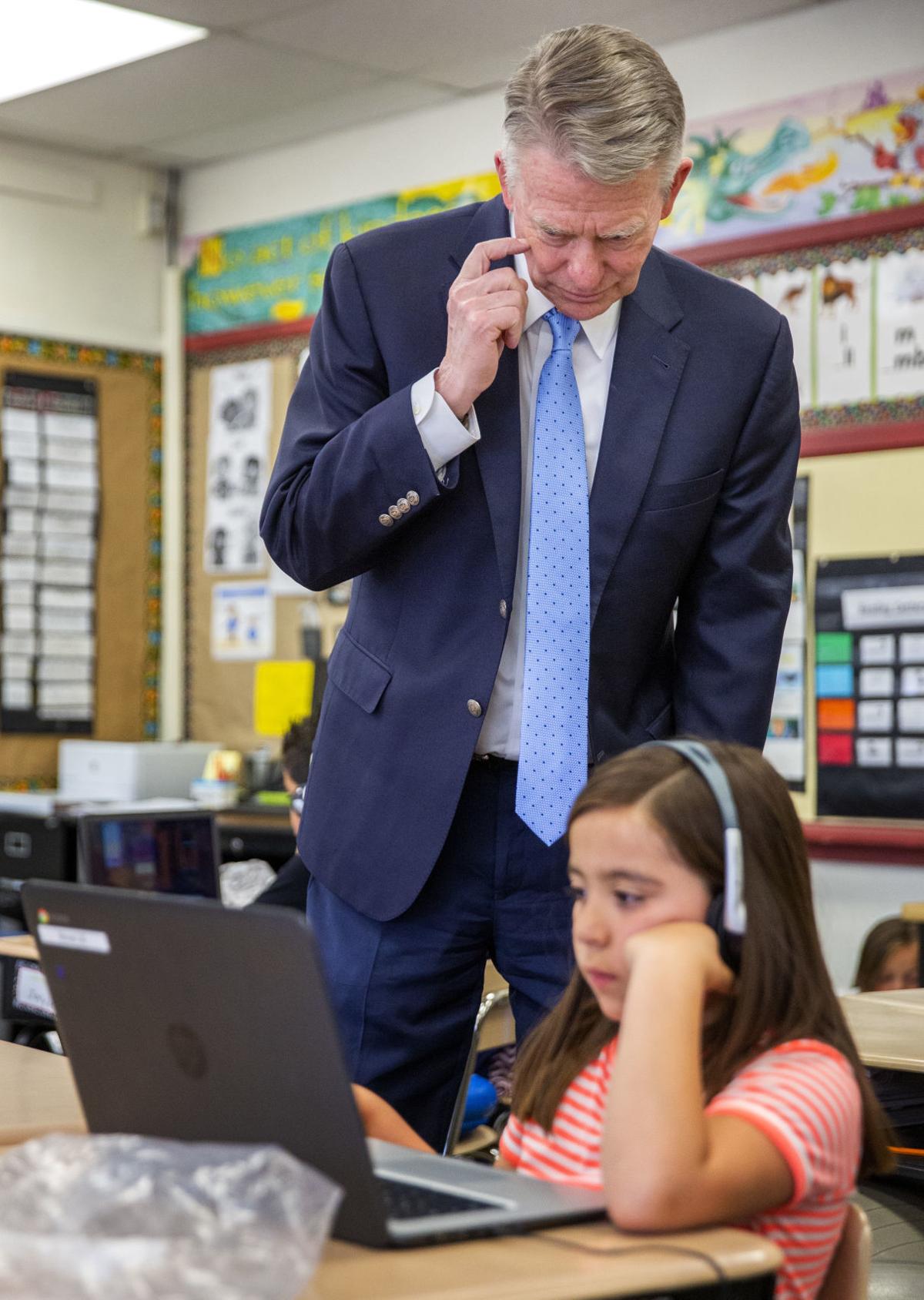 Gov. Brad Little watches a student work on the computer Thursday at Jefferson Elementary School in Jerome. Little toured the school as part of his post-legislative tour.

JEROME — Two bills to restrict Medicaid expansion and the ballot initiative process that made it possible took center stage in the capitol this year, drawing the legislative session out to 95 days and bringing in thousands of critical calls and emails to the governor’s office.

But despite his own characterization of the approved Medicaid expansion bill as “imperfect,” Gov. Brad Little says he considers his first session as governor a success, touting advances quietly made in education and tax reform amid the controversy.

“There was a lot of noise about the initiative bills and the Medicaid expansion bills, and that distracted a lot of the public from seeing a lot of the good legislation that passed,” Little said in an interview with the Times-News on Thursday after a tour of Jefferson Elementary School in Jerome.

“I think the problem,” he continued, “is things are so darn good in Idaho that people tend to find acrimonious issues to talk about and glaze over” progress in other realms.

Some of the advances Little is particularly proud of include a new law to raise starting teacher pay to $40,000, steps taken to increase dual enrollment opportunities for high school students, and $13 million in new funding that will double Idaho’s investment in its K-3 literacy initiative. He also cited a new law, made possible by the 2018 South Dakota v. Wayfair Supreme Court decision, that will require major out-of-state internet retailers to collect and remit Idaho’s sales tax; the money will go into a new tax relief fund.

But Little wasn’t as satisfied with all of the legislation passed this year. Of the roughly 330 bills he signed this year, he said, “100 of those were not perfect.”

Those imperfect bills included the amended version of Senate Bill 1204, which will attach conditions, including a 20-hour-a-week work requirement, to Medicaid expansion in Idaho.

In a transmittal letter for the bill, Little referenced recent “costly lawsuits” that ended in similar work requirements in Kentucky and Arkansas being struck down by a federal judge.

But on Thursday, Little said he didn’t believe Idaho was at significant risk of facing legal challenges to its Medicaid expansion conditions. Before the work requirements go into effect on January of next year, he noted, waiver requests to implement the requirements must be approved by the federal government.

“There’s a fair possibility, given the way things are taking place at the federal government, that we’ll have just plain Medicaid expansion and the paperwork on those waivers won’t even go through,” Little said. “I think the timing of it makes the risk very minimal.”

“There’s better than a 50 percent chance that before we are subject to any litigation, we will have a good idea [of what the federal government will approve] and we can work with the Legislature,” Little said. “It’s not as draconian as the opponents indicated it would be.”

Another issue that the Legislature will likely revisit next year: a potential overhaul to Idaho’s public school funding formula that would change the formula from an attendance-based to an enrollment-based model. Little said he wasn’t surprised that the Legislature was not able pass a funding formula rewrite bill this session, in part because of concerns he had heard from educators across Idaho about how changes to the formula had the potential to create “winners and losers.” But rewriting the formula isn’t on Little’s list of education priorities.

“I want to work on literacy, teacher retention, teacher recruitment, what we’re doing with career technical, all those other things that are fundamental to the classroom,” Little said, “and not be bogged down in the zero sum game of school district funding.”

An unusual question for Idaho schools: How should they spend additional money?

Gov. Brad Little shakes hands with students as they exit the classroom Thursday at Jefferson Elementary School in Jerome. Little toured the school as part of his post-legislative tour.

Gov. Brad Little talks to Principal Angela Brulotte on April 18 at Jefferson Elementary School in Jerome. Little toured the school as part of his post-legislative tour.

Gov. Brad Little watches a student work on the computer Thursday at Jefferson Elementary School in Jerome. Little toured the school as part of his post-legislative tour.