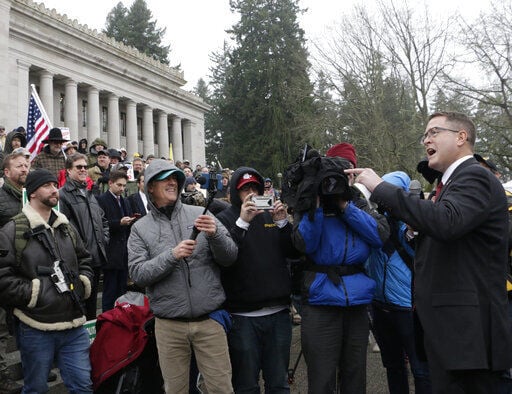 Republican Rep. Matt Shea speaks at a gun-rights rally, where many gathered in support of the embattled lawmaker, Friday, Jan. 17, in Olympia, Washington. 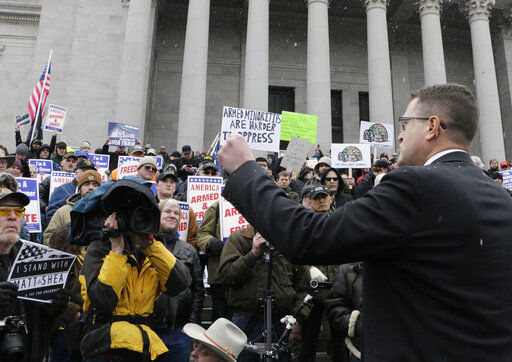 Republican Rep. Matt Shea speaks at a gun-rights rally, where many gathered in support of the embattled lawmaker, in Olympia, Wash., Friday, Jan. 17. 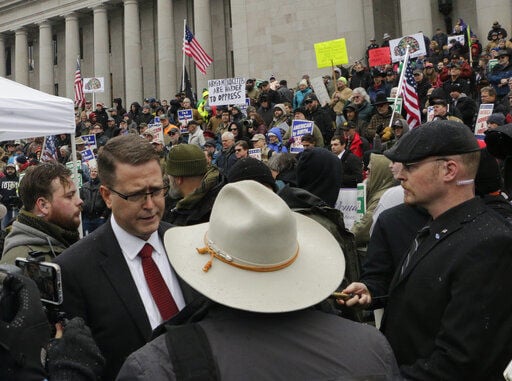 SPOKANE, Wash. — A Washington state lawmaker whose actions surrounding an armed standoff with federal agents were dubbed “domestic terrorism” in a recent report has for years been spreading his anti-government views to other Western states.

Republican Rep. Matt Shea is a co-founder of the Coalition of Western States, a loose federation of politicians and anti-government and militia supporters throughout the U.S. West. Its goal is to “stop unconstitutional actions against United States citizens,’’ according to the December report into Shea’s activities, paid for by the Washington state House.

Shea is back serving in the House this session, sitting alone in the back of the chamber since he was kicked out of the Republican caucus.

The report, by a Seattle-based private investigation agency, found Shea helped plan, engaged in or promoted three armed conflicts against the U.S. government in recent years. It called his actions in one — the 2016 standoff at an Oregon wildlife refuge — an “act of domestic terrorism against the United States.”

Despite numerous calls for his resignation, Shea says he won’t go.

“I’m still the state representative from the 4th Legislative District in Spokane Valley, Washington, and we are keeping up the fight this morning,” Shea, 45, said in a video posted on Facebook on Jan. 6, as the Legislature convened.

Shea rarely speaks to the news media and did not respond to numerous phone calls and emails from The Associated Press.

Critics say Shea has fomented anti-government feelings and acted more like an agitator than a lawmaker.

“Shea is a major connector and influencer for antidemocratic movements across the West,’’ said Kate Bitz, a manager of the Portland, Oregon-based Western States Center, which tracks extremists across the Pacific Northwest.

He often visits other parts of Washington, plus Oregon, Montana and Idaho to spread his views, Bitz said.

“His legislative role has been reduced to introducing far-right proposals that pander to his allies while having no chance of passing,” she said.

In recent years, Shea has introduced bills to establish a parental notification requirement for girls under 18 who seek abortions; to allow religious objectors to avoid paying union dues; and to allow holders of concealed carry permits to possess pistols in sports stadiums and other public facilities.

Those bills failed, though he did introduce a few that passed, including one directing the state Department of Ecology to report annually on its participation in interagency agreements.

One of Shea’s avenues for spreading his influence is the Coalition of Western States, or COWS, which formed in 2014 as a result of the armed standoff in Nevada between rancher Cliven Bundy and federal law enforcement officers. Shea founded the group with former Nevada Assemblywoman Michele Fiore; former Apache County, Arizona, supervisor Barry Weller; and former Washington state Rep. David Taylor.

The group said in 2015 it had members in Washington, Oregon, Idaho, Montana, Utah, Nevada, Arizona and New Mexico.

According to the report, others who joined included former Washington state Rep. Graham Hunt and Richard Mack, founder of the Constitutional Sheriffs and Peace Officers Association. At least one other member currently holds legislative office: Idaho GOP state Rep. Heather Scott. She did not respond to a request for an interview.

Fiore, who is now a Las Vegas city councilwoman, declined to speak to the AP about Shea or COWS.

The Southern Poverty Law Center said it does not classify COWS as an extremist or anti-government group. But it has labeled Shea a “vocal supporter of the anti-public lands extremist movement.”

Shea appears often in right-wing media, in the pulpit of conservative evangelical churches, and at gun rights rallies. During those appearances, he often blames an axis of communists, Islamists and environmentalists — along with liberals in general — for many of the nation’s ills.

The Rampart Group report prepared for the Washington Legislature cited Shea’s involvement in the Nevada and Oregon standoffs and another armed conflict in Idaho in 2015.

In the Bundy standoff, Shea posted a plea to Patriot Movement members “that resulted in the April 11, 2014, turnout of approximately 1,500 armed militia members that stood against the U.S. government.” The standoff eventually ended peacefully.

The Priest River, Idaho, conflict occurred as the Department of Veterans Affairs prepared to remove firearms from the home of a military veteran whose name had been added to a national background check system because he had suffered a stroke and was considered not competent to possess firearms.

Shea described the VA actions as “bureaucratic terrorism.” He and about 100 supporters, many armed, blocked a VA employee from entering the home, the report said.

The confrontation ended without the removal of the guns.

In 2016, Shea helped plan and prepare for the armed takeover of the Malheur National Wildlife Refuge near Burns, Oregon, the report said. He again summoned Patriot Movement members to stand against the federal government.

The House hired the Rampart Group to look into Shea’s alleged anti-government activities after a 2017 online chat leaked to the press indicated he joined a discussion in which others suggested violence against left-wing protesters. The investigative team, headed by a former FBI agent and a former law enforcement officer, also found Shea in the past trained young people to fight a “holy war” and condoned intimidating political opponents.

Despite the controversies, Shea remains popular in his very conservative district, where he was reelected in 2018 with 58% of the vote.

He has said he plans to run for reelection this year.

Shea declined to be interviewed or participate in the Rampart Group’s report and called its findings a “lie” in a recent Facebook post.

“I have been falsely accused of being a ‘domestic terrorist’ by a private investigator who never spoke to the principals involved in the incidents she described and relied instead on anonymous sources,” he wrote.

Copyright 2020 The Associated Press. All rights reserved. This material may not be published, broadcast, rewritten or redistributed.

A bill from Rogerson Sen. Bert Brackett would create "wolf-free" zones and allow for year-round hunts by Idahoans with a valid hunting license and a wolf tag.

Republicans moved forward with several bills on Wednesday that would provide residents relief on grocery and property taxes.

Those who wish to “proudly express their support for unborn children” could do so on a new proposed license plate.

A new bill would ban drivers from using cellphones and other electronic devices.

A House committee will vote this week on a controversial bill that would let eye doctors perform some laser-assisted eye surgeries. They say they have adequate training; eye surgeons say they don't.

Republican Rep. Matt Shea speaks at a gun-rights rally, where many gathered in support of the embattled lawmaker, Friday, Jan. 17, in Olympia, Washington.

Republican Rep. Matt Shea speaks at a gun-rights rally, where many gathered in support of the embattled lawmaker, in Olympia, Wash., Friday, Jan. 17.