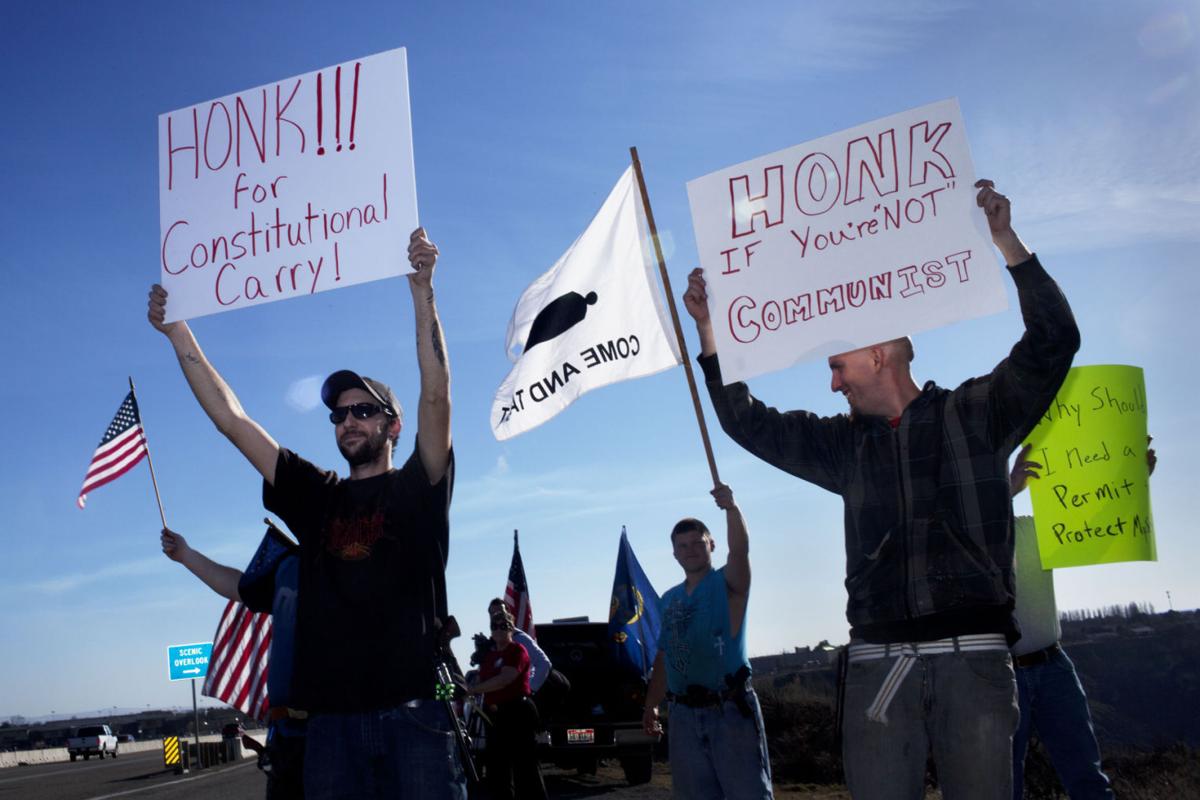 Individuals rally in favor of a bill that would allow people to carry concealed guns anywhere without a permit on Friday, Mar. 6, 2015, on the north side of the Perrine Bridge in Jerome County. 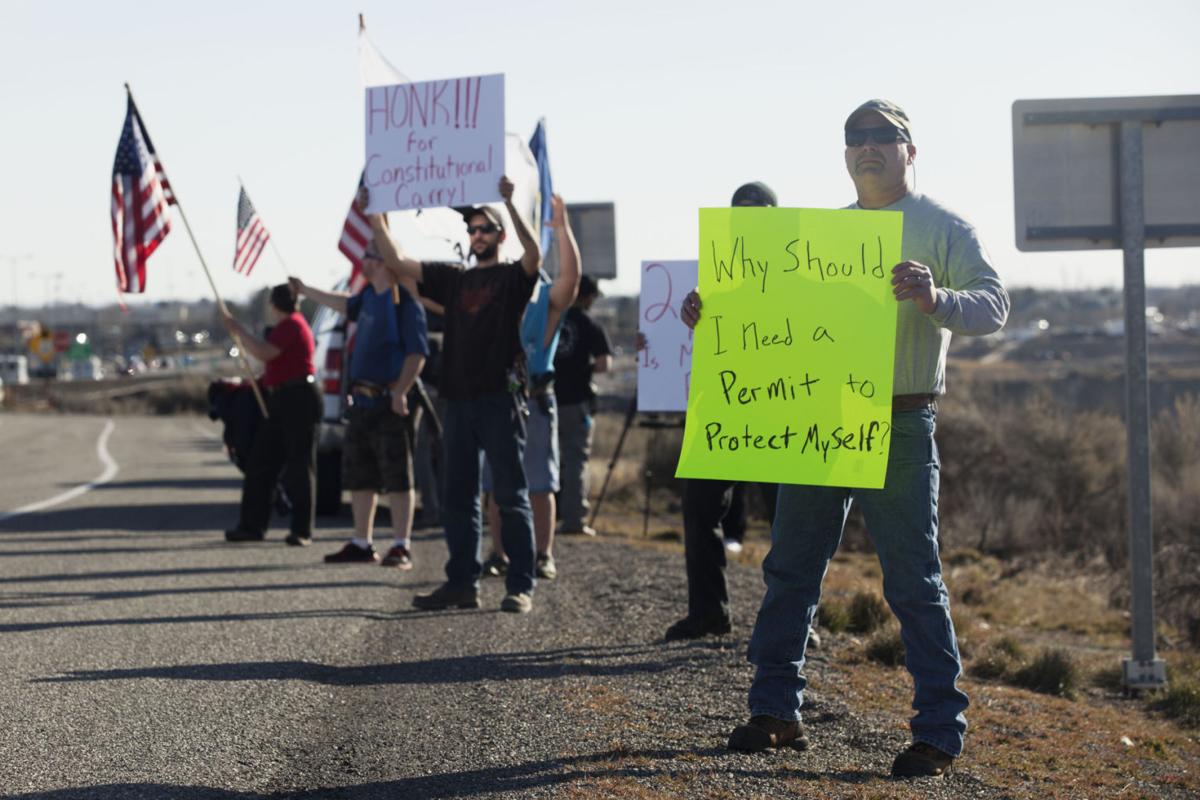 Gregg Phipps of Kimberly, right, rallies in favor of a bill that would allow people to carry concealed guns anywhere without a permit on Friday, Mar. 6, 2015, on the north side of the Perrine Bridge in Jerome County.

BOISE • Constitutional carry legislation, which would allow anyone who can legally carry a gun to carry concealed without a permit, is dead for the year, Republican legislators said Friday at a news conference. Idaho lawmakers instead plan to take up a bill to modify the state code on concealed carry and take away elected officials’ rights to carry a concealed handgun without a permit.

The new bill, which is backed by the National Rifle Association and which is scheduled to be introduced into the House State Affairs Committee on Monday, has much in common with one Sen. Marv Hagedorn, R-Meridian, already introduced into Senate State Affairs. It reorganizes the concealed weapons code to make it more user-friendly, and specifies that a permit is not required outside of city limits. Current law says a permit isn’t outside a city “while engaged in lawful hunting, fishing, trapping or other lawful outdoor activity,” and there are different interpretations of what this means. The new law will also say gun owners can carry a concealed weapon in a vehicle without a permit, provided it is unloaded, disassembled, or in a zip case, said Rep. Rick Youngblood, R-Nampa.

Lawmakers didn’t rule out considering a permitless carry law in future years. But Youngblood said the one pending now, which was put forth by the Idaho Second Amendment Alliance, could threaten Idaho’s permit reciprocity agreements with other states, Washington in particular.

“We talk about concepts, but we vote on words, and that’s all got to fit,” said House Speaker Scott Bedke, R-Oakley.

Bedke, and Loertscher especially, have been feeling the heat from supporters of the “constitutional carry” law — so named because its supporters believe the Second Amendment gives them the right to carry concealed — and have been getting many calls and emails asking for a hearing. Loertscher stood up on the House floor late last month and asked them to stop calling his home.

Greg Pruett, the president of the Second Amendment Alliance, said he hopes they change course, adding thousands of people have signed his group’s petition and shown support. Pruett said he would still urge people to call Loertscher, Bedke and their own representatives.

“The gun owners of Idaho want to see constitutional carry,” Pruett said. “They need to stop what they’re doing and back the people of Idaho. … Instead, they’re doing their own agenda.”

Pruett met with Loertscher Thursday. He said he offered to rewrite a paragraph Loertscher was concerned about, but that Loertscher replied he was done with the bill.

“If they had an issue with something in the bill, they should have reached out to us to correct whatever it is,” Pruett said. “But they haven’t come up with anything legitimate.”

The new gun bill on Monday’s agenda was hashed out by an informal group of lawmakers, including Youngblood and Reps. Judy Boyle, R-Midvale and Jason Monks, R-Meridian, who vet gun legislation.

“The gun owners see what’s happening,” Pruett said. “A couple of individuals sitting on a bill, killing a bill that thousands of citizens want to see. And they’re going to remember that come election time.”

Some opponents of the permitless carry law have said Alaska permit holders lost reciprocity with Washington state after Alaska passed a similar law in 2003. However, Alaska state troopers spokeswoman Megan Peters said is never happened. Alaska permits were never recognized in Washington in the first place, she said.

Bedke said the group started to meet a few years ago, to get input from law enforcement and others on proposed gun bills and make sure they can pass both houses. Before, he said, gun laws would pass one house but not the other.

“I think this process has served us very well, and we hope to continue to use it,” Bedke said.

Does an alien species live inside stars?

BOISE • From gun control and anti-domestic violence advocates to constitutional carry supporters, everyone who testified on Monday agreed on o…

BOISE • On a mostly partisan vote, Idaho’s House of Representatives passed a rewrite of the state’s concealed carry code Tuesday.

BOISE • Legislation to get rid of the need for a concealed carry permit within city limits will be introduced early in the 2016 session, the b…

Loertscher asks Gun Groups to Dial it Down

BOISE • Tom Loertscher said Tuesday that supporters of the “constitutional carry” bill are calling his house and harassing his family.

BOISE • People would be allowed to carry concealed weapons without a permit outside city limits, under a new law that will be introduced into …

Individuals rally in favor of a bill that would allow people to carry concealed guns anywhere without a permit on Friday, Mar. 6, 2015, on the north side of the Perrine Bridge in Jerome County.

Gregg Phipps of Kimberly, right, rallies in favor of a bill that would allow people to carry concealed guns anywhere without a permit on Friday, Mar. 6, 2015, on the north side of the Perrine Bridge in Jerome County.