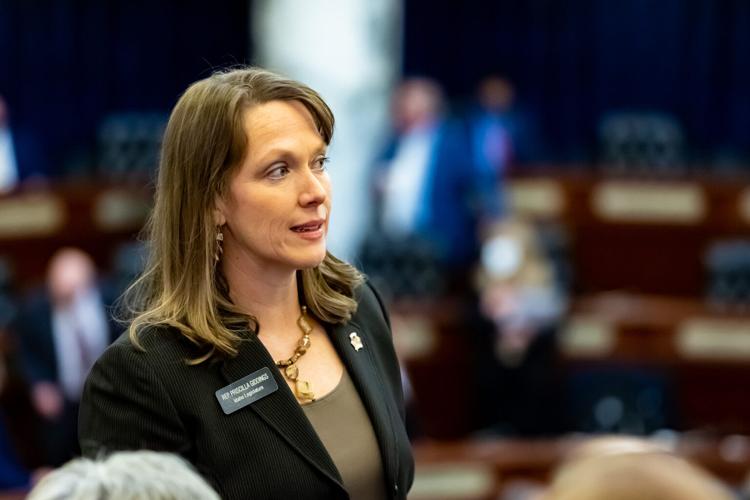 Rep. Priscilla Giddings, R-White Bird, greets supporters in the House gallery before the session at the statehouse in Boise, Idaho on November 15, 2021. 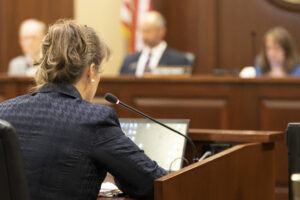 After a nearly three-month delay because of the legislative session, a public records lawsuit against Rep. Priscilla Giddings, R-White Bird, will continue this month in court.

Giddings, who is running for lieutenant governor in the Republican primary on May 17, is the subject of a civil complaint filed by Erika Birch, a Boise attorney who represented the legislative intern who accused former Rep. Aaron von Ehlinger of rape in March 2021. A jury convicted von Ehlinger of the rape charge on Friday.

Birch filed the complaint in mid-January, but Giddings invoked her privilege as a legislator to defer civil suits until after the legislative session.

Birch’s complaint states she sent a public records request to Giddings on Aug. 19, 2021, for any written or electronic communications between Giddings and von Ehlinger that were related to her client, who is referred to as Jane Doe to protect her identity. Birch’s request encompassed the ethics committee complaint and hearing involving von Ehlinger in March, as well as the ethics complaint and hearing for Giddings in August. Her request also included communications between Giddings and David Leroy, an attorney who briefly represented von Ehlinger during the ethics investigation.

Two days after Birch’s request, Giddings responded to Birch by saying, “My office does not have any public record related to your request that isn’t already public. I have asked the Legislative Services Office to search their databases as well. My office considers this request closed.”

In a response filed last week on behalf of Giddings, Deputy Attorney General W. Scott Zanzig asked the court to dismiss the case because Giddings did not have any records responsive to Birch’s request.

Zanzig also argued Birch “had Rep. Giddings in her sights for litigation” and based on what she saw as Birch’s lack of candor and other pending litigation involving Giddings, she did not respond to further requests for the records.

Wendy Olson, a Boise attorney who is representing Birch in the case, filed a response brief Tuesday afternoon saying Giddings did not comply with the Idaho Public Records Act because her search of the records should have included more than Giddings’ legislative email account, including text messages and messaging apps. Based on Giddings’ responses, Olson said, it’s unclear if that search went beyond legislative emails.

“Ms. Giddings offers no evidence regarding her efforts to search other media or platforms either at the time of Ms. Birch’s request or now, eight months later,” Olson said in the brief.

Olson included a transcript from Giddings’ ethics hearing at the Legislature in August when she referenced communications on Facebook and at least one other messaging platform but said Giddings offered no evidence that she searched those platforms at any time for responsive records.

Olson also said Giddings’ statements justifying the reason why she did not respond to Birch’s further attempts to receive the records do not matter in the context of Idaho’s public records law. A requestor does not have to specify the reason he or she is seeking the information.

“That Ms. Birch, or any other requestor, might seek such information to evaluate or even support future legal claims does not excuse Ms. Giddings from complying with her obligations under the Act,” Olson wrote.

Fourth District Judge Peter Barton will hear the case at 4 p.m. May 10 at the Ada County Courthouse.

Idaho’s congressional delegation has received hundreds of thousands of dollars of support from gun rights organizations — and has stayed mostly quiet on the topic of new gun safety and gun control proposals now making their way through the U.S. Congress.

An Idaho legislator who lost his primary election race by six votes earlier this month says he will seek a recount of the votes in his bid to be-elected to the Idaho House of Representatives.

The results of a hand count of randomly selected ballots from the May 17 primary election in three Idaho counties showed little to no margin of error in the reported vote count, according to a press release from the Idaho Secretary of State’s office.

The Idaho State Board of Canvassers voted unanimously Wednesday afternoon to certify results of the state’s May 17 primary elections, making the results official for the first time.

A former congressional candidate and Boise businessman who ran against U.S. Rep. Russ Fulcher in 2020 pleaded guilty to using COVID-19 funds for personal use and falsifying records to conceal over $20,000 in in-kind contributions, the U.S. Department of Justice said.

This luxury hotel in England was once a Victorian sea fort

This luxury hotel in England was once a Victorian sea fort

Rep. Priscilla Giddings, R-White Bird, greets supporters in the House gallery before the session at the statehouse in Boise, Idaho on November 15, 2021.