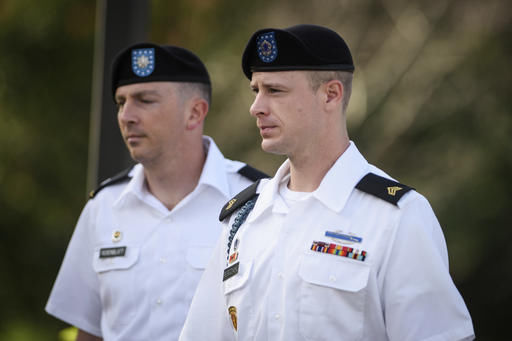 In a July 7, 2016 file photo, Sgt. Bowe Bergdahl, right, arrives with his military lawyer, Lt. Col. Franklin Rosenblatt, for a legal hearing at the courtroom facility, on Fort Bragg, N.C. 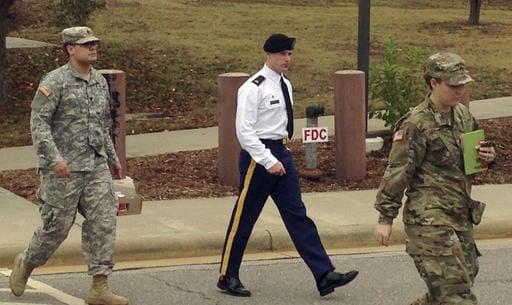 FORT BRAGG, N.C. — A military officer testified Monday that he saw another soldier shot in the head during the 2009 search for U.S. Army Sgt. Bowe Bergdahl, who’s accused of endangering comrades by walking off his post in Afghanistan.

At the same hearing, an Army judge also agreed to delay Bergdahl’s trial by several months until May 15, 2017.

Prosecutors are arguing that two wounded soldiers’ injuries should be allowed as evidence to show Bergdahl’s disappearance effectively put other military members in harm’s way.

Bergdahl, who is from Hailey, is charged with desertion and misbehavior before the enemy, the latter of which carries a maximum penalty of life in prison.

U.S. Air Force Maj. John Marx testified about a firefight that erupted as he and several others joined about 50 members of the Afghan National Army on a search for Bergdahl. They were attacked by enemy fighters near a town in Afghanistan on July 8, 2009.

Marx testified about fighting alongside U.S. Army National Guard Sgt. First Class Mark Allen, who was shot in the head during the firefight.

Prosecutors said Allen suffered a traumatic brain injury that left him in a wheel chair and unable to communicate. Another soldier had hand injuries and required surgery because of a rocket-propelled grenade.

Marx described the mission’s sole purpose as to search for Bergdahl. He testified he was beside Allen as bullets flew.

“I looked at him, then I see a trickle of blood coming down his head,” Marx testified. Asked where Allen was wounded, Marx pointed at his temples and said: “Right through his head.”

Marx testified that he later carried Allen to the medevac helicopter, describing it as “probably one of the toughest things I’ve ever done in my life.”

Bergdahl, dressed in a white shirt and blue pants, appeared stoic as he listened.

Marx and two others involved in the firefight said they came from another part of Afghanistan to take part in a hastily planned search mission. Their group, patrolling on foot, had run out of water but couldn’t get more supplies before they came under attack.

U.S. Army Staff Sgt. Jason Walters testified that he ran toward Allen as rocket-propelled grenades exploded nearby with concussive force: “Everything went black, and I saw stars.”

He said he was later able to get on a radio and call for air support.

Jonathan Morita, a former Army specialist, was nearby when an unexploded RPG slammed into the rifle he was holding. He said the injury was comparable to having his hand smashed by a hammer.

“I looked at it, and I thought: ‘That’s going to hurt in the morning.’ I didn’t feel it. Too much adrenaline,” he said.

Walking out after his testimony, Morita glared at Bergdahl, but the defendant didn’t appear to make eye contact.

Prosecutors have said evidence of the injuries will help them show that Bergdahl endangered his comrades, one of the elements of the misbehavior before the enemy charge.

Defense attorneys have argued that Bergdahl wasn’t responsible for the injuries, writing in a motion earlier this year that: “Allen’s injuries were directly caused by the Taliban, not by SGT Bergdahl.”

More arguments on the matter are scheduled Tuesday. Asked after Monday’s hearing whether evidence of the injuries belongs in the case, Bergdahl’s attorney Eugene Fidell said the defense would address the matter Tuesday.

Also Monday, Army Col. Jeffery Nance decided to push the trial back to May after prosecutors requested a delay. They cited the pace at which they’re able to get approval to give the defense classified evidence.

Nance expressed frustration, saying he would call military officials as witnesses at a December pretrial hearing if the issues aren’t resolved by then.

Bergdahl left his post in Afghanistan in 2009 and was held captive by the Taliban and its allies for five years. He has said he wanted to cause an alarm and draw attention to what he saw as problems with his unit. The Obama administration’s decision to swap prisoners for his return was heavily criticized by some Republicans.

Police are asking the public's help in finding a missing girl.

End of the line for MaVTEC: Group that helped build Canyon Rim Trail counts successes and calls it quits.

“It’s been a long, awesome run,” Tigue said. “And I’m super thrilled with the results of what our team has done.”

Will the earthquakes in central Idaho cause the Yellowstone volcano to erupt?

Seismic activity in central Idaho has been elevated for the past 20 months. These earthquakes are aftershocks of a magnitude 6.5 earthquake that occurred on March 31, 2020 — a classic example of a mainshock-aftershock sequence.

Opposing counsel in Vallow case accuse each other of ethics violations

Animosity between the prosecution and defense in the murder case of Lori Vallow appears to have a reached the boiling point.

‘I have not seen it like this’: Idaho’s child welfare safety net is wearing thin

BOISE — So far this year, at least 44 Idaho children removed from their homes for safety reasons have stayed in short-term rentals or hotel ro…

Build Back Better: What’s in it for Idaho?

At the state level, policy advocates say several pieces of the bill could have a major effect in Idaho, including some lesser-known provisions contained in the 2,000-page bill.

In a July 7, 2016 file photo, Sgt. Bowe Bergdahl, right, arrives with his military lawyer, Lt. Col. Franklin Rosenblatt, for a legal hearing at the courtroom facility, on Fort Bragg, N.C.