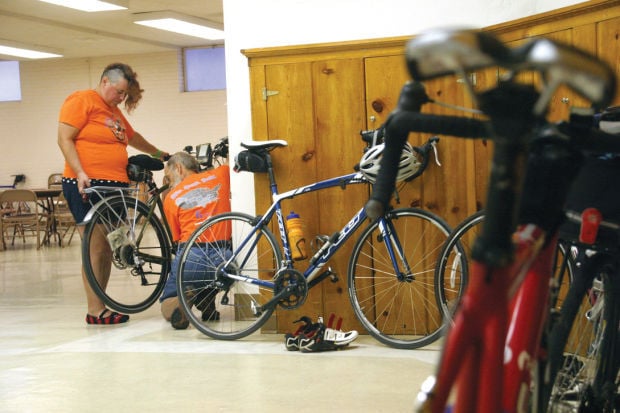 Landon Beachy of Iowa, right, helps Carol Hawkins of Seattle with a bike problem July 24 in the basement of the First United Methodist Church in Twin Falls. 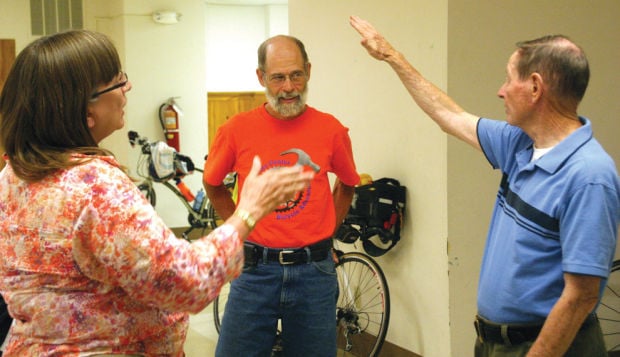 TWIN FALLS • A couple of months ago, some cyclists traveling across the U.S. contacted the First United Methodist Church.

They needed a place to stop for the night as they made the final leg of their trip through the Northwest. The travelers were part of the Fuller Center Bicycle Adventure’s sixth annual summer cross-country ride.

The church opened its doors

July 24 to the 21 cyclists, who took a break and got to speak with the congregation about why they are biking 3,700 miles from Savannah, Ga. to Vancouver, B.C.

• They were trying to raise $220,000 for The Fuller Center for Housing, a nonprofit that seeks to eradicate poverty housing by promoting partnerships with individuals and community groups to build and rehabilitate homes for people in need in 16 countries and 22 states.

• Along their route, they stopped in cities with Fuller Center chapters so they could help with local projects. They decided to stop in Twin Falls because it was between major stops in Salt Lake City and Boise.

• The cyclists also share their stories and message in hopes of inspiring people to start more Fuller Center chapters.

How is The Fuller Center Bicycle Adventure different from similar programs? Bike and Build, for example, is a nonprofit committed to affordable housing that sends college-age volunteers across the country to help build homes.

“We let all ages join, and we’re more of a faith-based trip,” Merrill said.

Tom Weber of Colorado was 52 years older than the group’s youngest member. Weber joined the Fuller Center Bicycle Adventure in 2011.

“I joined this ride in a selfish way, to ride across America,” he said.

But Weber said his perception of the trek changed after he saw the effect the volunteers had on people.

He choked up recalling how he helped put in an extra wheelchair-accessible bedroom and bathroom for a sick boy on the East Coast.

The Fuller Center is an ecumenical Christian organization that works in partnership with people of all faiths and backgrounds. The partners include Hindus in Nepal, Buddhists in Sri Lanka and Muslims in Senegal.

Millard Fuller founded The Fuller Center in 2005, after first founding Habitat for Humanity and serving as its president for 29 years.

It is also about living with less so other can have more. Since they are traveling by bike, they can only pack a small bag and often sleep on floors.

“Biking is our method to spread the word about affordable housing,” Merrill said.

And by the end of the trip, everyone is a flat-tire expert.

How does the Fuller Center Bicycle Adventure change those who participate?

“This is my first time doing it. I wanted to do a bike ride across the country,” said Ben Coughenour of Michigan. “At first I was happy to find a cheap, easy way to do it.”

But Coughenour said he has changed over recent weeks. He also was impressed by how people go out of their way to help the group with a meal or place to stay.

“The more I participate, the more I want to make a difference, and it isn’t about me anymore,” he said. “I hope to ride again, but I’m just enjoying it while it lasts.”

The next day, the group departed en route to Boise, and then were headed to Lewiston.

In Lewiston, they planned to build 12 wheelchair ramps.

Interested in Bringing The Fuller Center to Your Community?

For more information or to track their progress, go to www.

Chad Daybell’s murder trial has new Idaho venue after ruling. Here’s where it will be

Nearly two weeks after an east Idaho judge ruled that Chad Daybell’s murder trial should be moved to a new county, the Idaho Supreme Court has designated a new venue.

Health misinformation was an Idaho-grown product for years. Now it has a body count.

A cottage industry of health misinformation has flourished in Idaho for years, with help from Idaho’s laissez-faire approach to governance and a faction of Idaho Republican lawmakers who support and amplify the misinformation.

Landon Beachy of Iowa, right, helps Carol Hawkins of Seattle with a bike problem July 24 in the basement of the First United Methodist Church in Twin Falls.