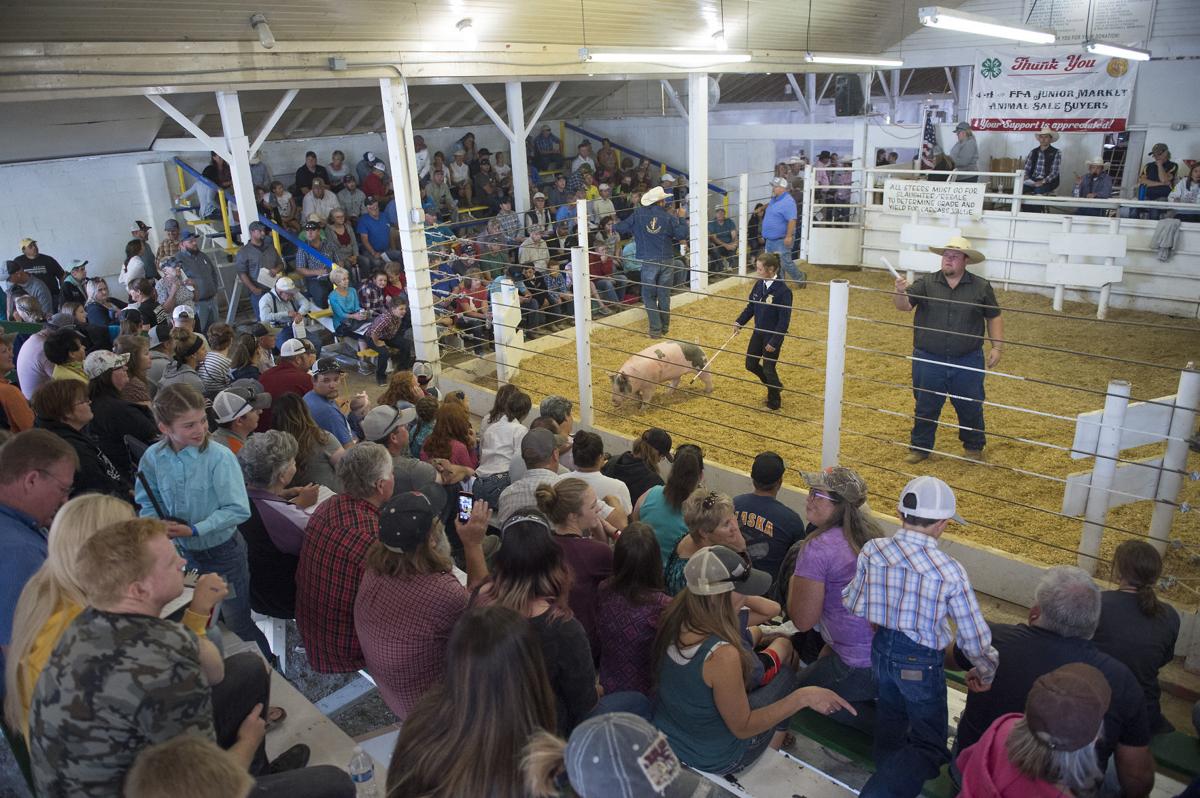 Keisha Koch of Murtaugh drives her pig around the auction ring Monday at the Twin Falls County Fair in Filer as auctioneer Jake Billington, right rear, entices higher bids from the audience. 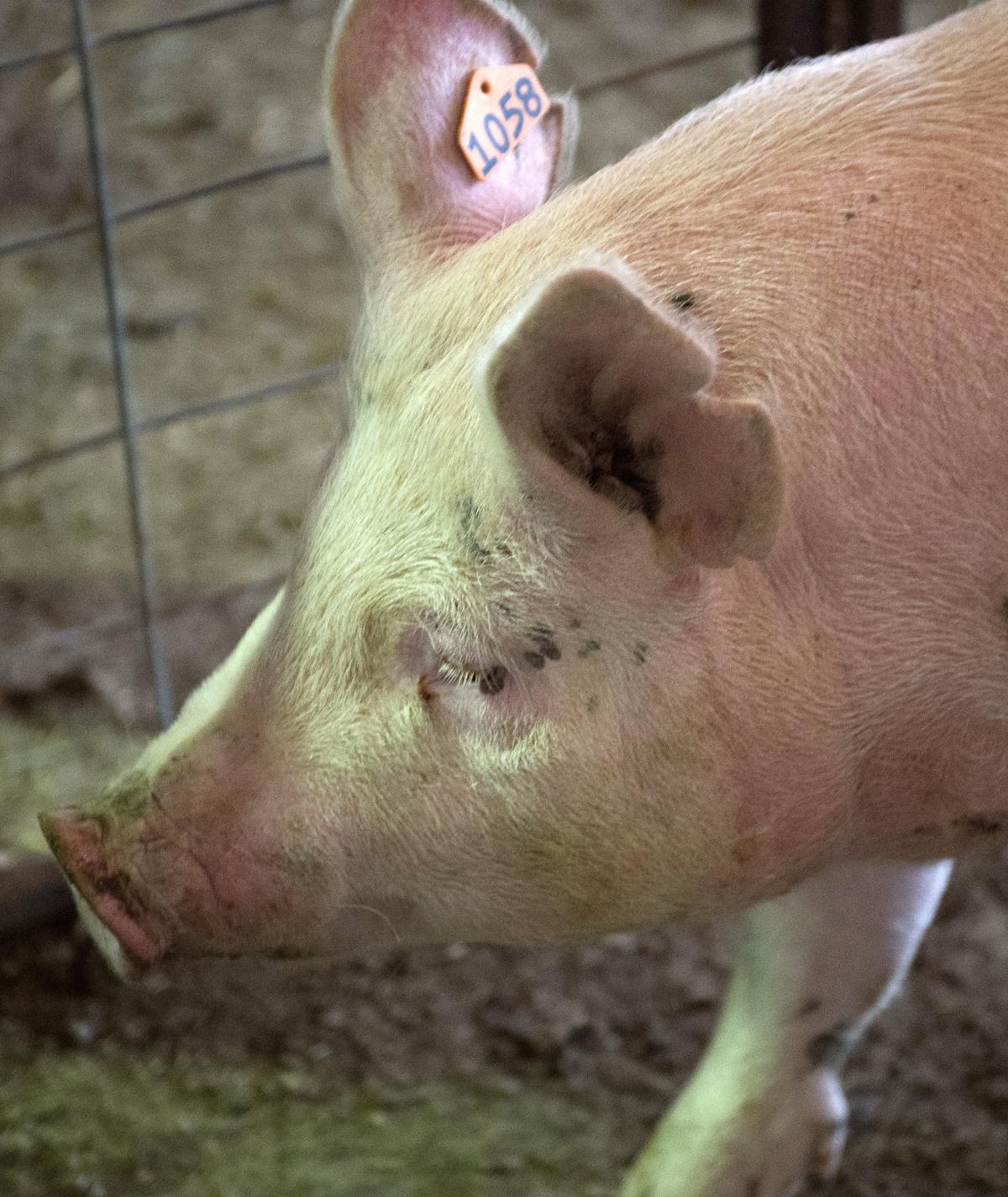 A pig paces while waiting to go on the auction block Monday at the Twin Falls County Fair in Filer. 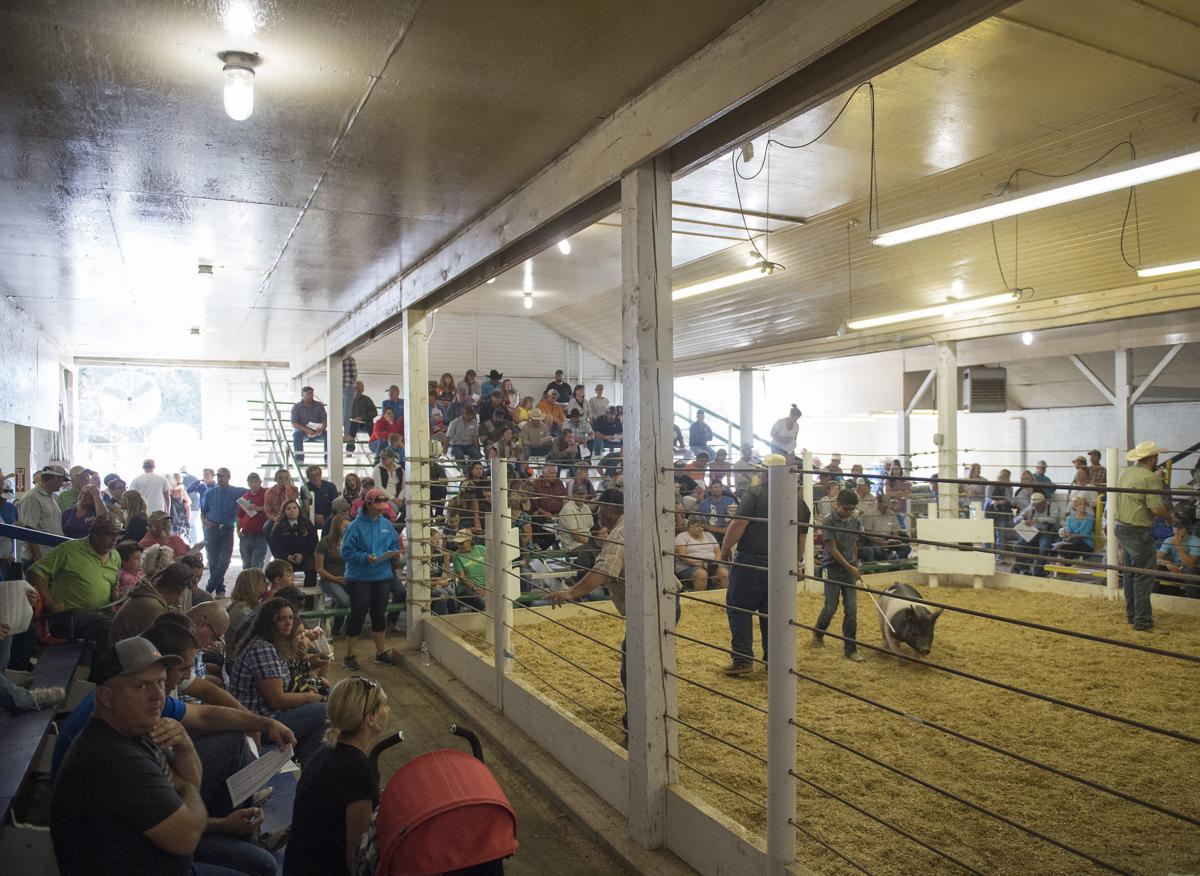 Youth put their swine on the auction block Monday, Sept. 3, 2018, at the Twin Falls County Fair in Filer.

FILER — Few tears were shed as 4-H and FFA youths led their animals to the auction block Monday at the Twin Falls County Fair.

Auctioneer Tanner Beymer’s rapid-fire words became nearly indiscernible as the bids approached $7 per pound. The bidders, however, knew exactly what he was saying.

“Now we’ve got us an auction, boys!” Beymer hollered.

Doug Burks, representing Burks Tractor in Twin Falls, dropped out as the bidding continued to rise.

“I like the red steer better anyway,” Burks said, nodding at the reserve grand champion, a Shorthorn cross named Ed standing in wait with its owner, Weston Casdorph.

“We’re having too much fun to quit now,” Beymer said in an attempt to get more than $8 per pound for Hall’s steer.

“Eight dollars is a little spendy,” Burks said. But he paid $5 per pound for Casdorph’s 1,395-pounder.

Auctioning off animals to the highest bidder is a long-held tradition at county fairs. But buyers know not to expect any bargains.

Hall’s grand champion steer that cost $11,640 in the auction ring will end up as $20-per-pound beef at the dinner table, plus the cost of cutting and wrapping.

That seemingly overpriced meat will help put Hall through college, said Joe Maxwell, an FFA advisor at Kimberly High School and owner of Maxwell Livestock. It’s a way local businesses can support the future of agriculture.

Beef-buyer Burks also bought the pair of grand champion market turkeys for $600. He’ll either be eating two turkeys worth $300 each or he’ll resell the birds for the market price of $50 — virtually donating $550 to a kid in a blue FFA jacket.

Maxwell had just spent $225 for a pair of turkeys — but the birds won’t ever find themselves on the Maxwell family dining table.

Since each student can sell only one animal each year at the fair’s auction, some will privately “sell back” other livestock to the ranchers who bred them, in exchange for the pick of next spring’s litter or brood.

Outside of the Lyle Masters Sale Barn, the next round of livestock stood in the shade of the barn.

Conner Porath waited for his turn to sell his Black Angus, Grizzly. Conner’s mother, Marni Porath, scrolled through the roster of animals to be auctioned, counting 70 steers, 72 sheep, and several hundred pigs.

Grizzly, a Black Angus steer out of the Poraths’ cows, weighs in at 1,285 pounds. “He’s a stocky dude,” Marni Porath said.

Duane Ramseyer, who turns 90 this month, took a break from the auction to find something to eat.

Ramseyer, a 1946 graduate of Filer High School, said he never had a chance to do FFA, but his children did.

Ramseyer was at the fair to buy a lamb to resell.

“I buy one every year,” the Filer farmer said. “It helps the program.”

FILER — Klarissa Gnesa was making final preparations the afternoon of Aug. 30 before showing her sheep at the Twin Falls County Fair.

FILER — Twin Falls fair attendance was about even with last year, but the carnival and food vendors raked in more money.

Keisha Koch of Murtaugh drives her pig around the auction ring Monday at the Twin Falls County Fair in Filer as auctioneer Jake Billington, right rear, entices higher bids from the audience.

A pig paces while waiting to go on the auction block Monday at the Twin Falls County Fair in Filer.

Youth put their swine on the auction block Monday, Sept. 3, 2018, at the Twin Falls County Fair in Filer.