Expert: Non-lethal Control of Wolves Key to Future
2 comments
Share this
{{featured_button_text}}
1 of 2 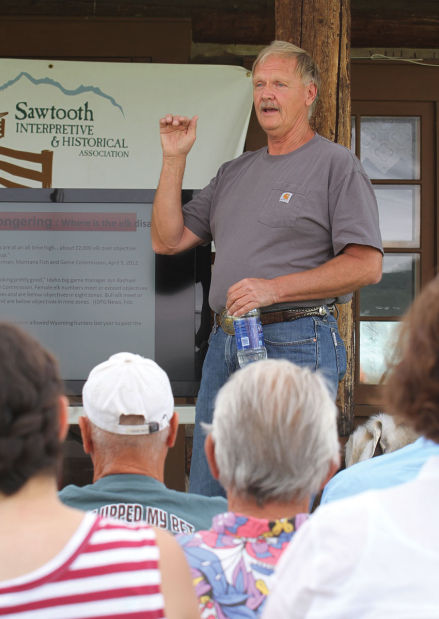 Photo by Brian Smith Times News Carter Niemeyer, a Boise-based wolf expert and former wildlife manager, speaks to an audience about wolves in Idaho on Friday at the Stanley Museum. Niemeyer said the best way to reduce wolf killings of cattle and sheep is to promote non-lethal deterrents instead of aerial killing of problem wolves. 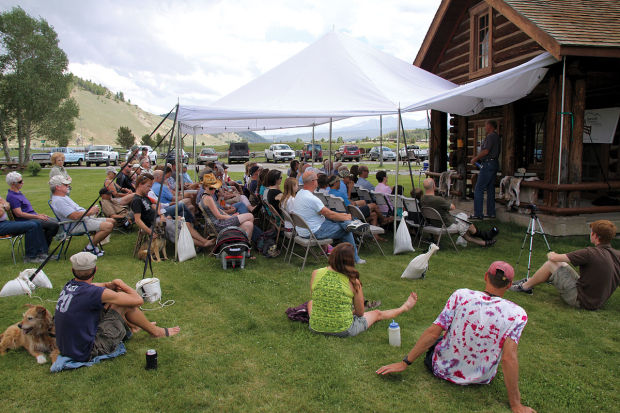 Photo by Brian Smith Times News An audience listened to Niemeyer’s presentation for about an hour.

STANLEY • To reduce wolf killings of sheep and cattle in south-central Idaho, reimbursements for lost livestock must be reduced or eliminated, and ranchers must not be able to easily order aerial killings of problem wolves or packs, a prominent Boise-based wolf expert said at a presentation in Stanley.

As long as lethal wolf control comes free of charge and area ranchers are paid for their losses, they won’t adopt voluntary, non-lethal wolf deterrents in an area that saw record-high depredations last year, said Carter Niemeyer, author of “Wolfer” and a former wolf manager and trapper.

“All it takes is a phone call and if you have a legitimate, confirmed loss, those wolves can be killed,” he said after his Friday presentation. “Most ranchers go, ‘Why in the world would I want to scare one away when we can just take care of the problem?’”

Lethal control is preferred in Idaho and other states, he said, meaning taxpayers are funding the large cost of killing problem wolves.

“Wildlife services under the United States Department of Agriculture, they won’t hesitate to spend $10,000 or $20,000 on a helicopter to shoot a group of wolves,” he said.

But that’s only a short-term treatment, he said. USDA wildlife services could spend money on non-lethal deterrents — lighting, electric fencing and corrals strung with flags — to protect livestock and not “get into a cycle of killing wolves.”

Idaho officials are applying for federal funding to reimburse ranchers for their wolf depredations in 2012. Half of that money, however, is earmarked for non-lethal deterrents. Whatever amount the state receives, Niemeyer said it would likely be enough for only a “pick-up truck and an employee.”

“There’s no silver bullet, but we’re willing to spend tens of thousands of dollars killing predators,” he said. “Why can’t we look at other methodologies and study the possibilities to do preventative things that don’t require us spending (that money)?”

But the “problem” won’t go away. Like it or not, wolves are here to stay and humans must learn to live alongside the reintroduced species, Niemeyer said during the presentation to a crowd at the Stanley Museum. Niemeyer’s presentation focused on his decades of work with wolves, including his role in helping re-establish the species in the area. He discussed public attitudes toward the predator, and misconceptions about the wolf’s reintroduction, which he called the nation’s most polarizing wildlife issue — ever.

“Wolves are prolific, resilient, they disperse and they are going to be here for a long, long time to come because they like the habitat we’ve provided them,” he said. “… I’m not here to advocate for wolves. I don’t love them. I don’t hate them, but I do recognize they are a native species and I think we’ve got to treat them like that.”

Niemeyer said he is often criticized for his work with the government’s reintroduction of wolves in northwestern regions of the United States. When he speaks publicly about the subject, between 150 and 300 people attend, often with their opinions cemented.

“Most of you people here today probably know how you feel about them,” he said. “I don’t feel like I’ve ever spoken to a crowd and turn you all 180 degrees before you left.”

Niemeyer referenced a chart showing how wolf populations have grown exponentially in the northwest and central Idaho since they were reintroduced.

“Along with this you could also have a graph on tempers, attitudes and opinions that goes right alongside ... ,” he said.

Along with those opinions have come rumors about the reason for their presence - to ruin and outlaw big game hunting, take away guns and drive the livestock industry out of the West.

Wildlife, however, react and benefit from wolves’ presence in the area, he said.

“They prey on big game, they create carrion for others to eat and scavenge, they regulate big game herds,” he said. “I think they make big game herds healthy because they were one of the natural predators of these species before settlers came and helped God manage wildlife.”

Wolves aren’t a threat to humans despite cultural mythologies painting them as villains, he said. Only two people in recent memory have been killed by wolves, but those incidents were in Canada and Alaska.

“I have never had a close call with wolves in my life,” Niemeyer said. “I have been surrounded by them dozens of times — packs and pups. I love it. I just sit on a log and think, ‘I wish I had all you here.’”

According to Idaho Department of Fish and Game statistics, wolves killed 34 cattle and 79 sheep last year in the southern portions of the Sawtooth Range, including Camas and Blaine counties. Across the state, they killed 90 cattle and 251 sheep. In turn, hunters killed 330 Idaho wolves last year, up from 200 the year before.

From 1987 to 2012, wolves killed an average of 143 sheep and 71 cattle a year across Idaho, Montana and Wyoming, Niemeyer said. In those states, there are 850,000 range ewes and millions of cattle. He displayed United States Department of Agriculture statistics that showed 26 percent of livestock died of respiratory problems while 0.2 percent died of wolf predation.

“Is that a big problem or not? It certainly is if it is you’re cattle and sheep,” he said.

Some COVID-19 patients from Blaine County are being transferred to Twin Falls and Boise.

One of Idaho’s top tourist areas is asking visitors to — please — stay out. Blaine County, home to skiing, live music, conferences and other e…

2 women injured after jumping from car to evade Jerome deputies

Two Magic Valley women were injured and hospitalized Tuesday when they jumped out of a moving car to evade law enforcement in Jerome County.

State officials issued a shelter-in-place order for Blaine County Thursday after 11 more residents and one person from another state tested positive for COVID-19 in the county, bringing the total number of cases there to 17.

St. Luke’s Magic Valley will open drive-up tents Thursday for screening and specimen collection for testing for coronavirus (COVID-19), the hospital announced in a statement Wednesday.

Some COVID-19 patients from Blaine County are being transferred to Twin Falls and Boise.

Photo by Brian Smith Times News Carter Niemeyer, a Boise-based wolf expert and former wildlife manager, speaks to an audience about wolves in Idaho on Friday at the Stanley Museum. Niemeyer said the best way to reduce wolf killings of cattle and sheep is to promote non-lethal deterrents instead of aerial killing of problem wolves.

Photo by Brian Smith Times News An audience listened to Niemeyer’s presentation for about an hour.