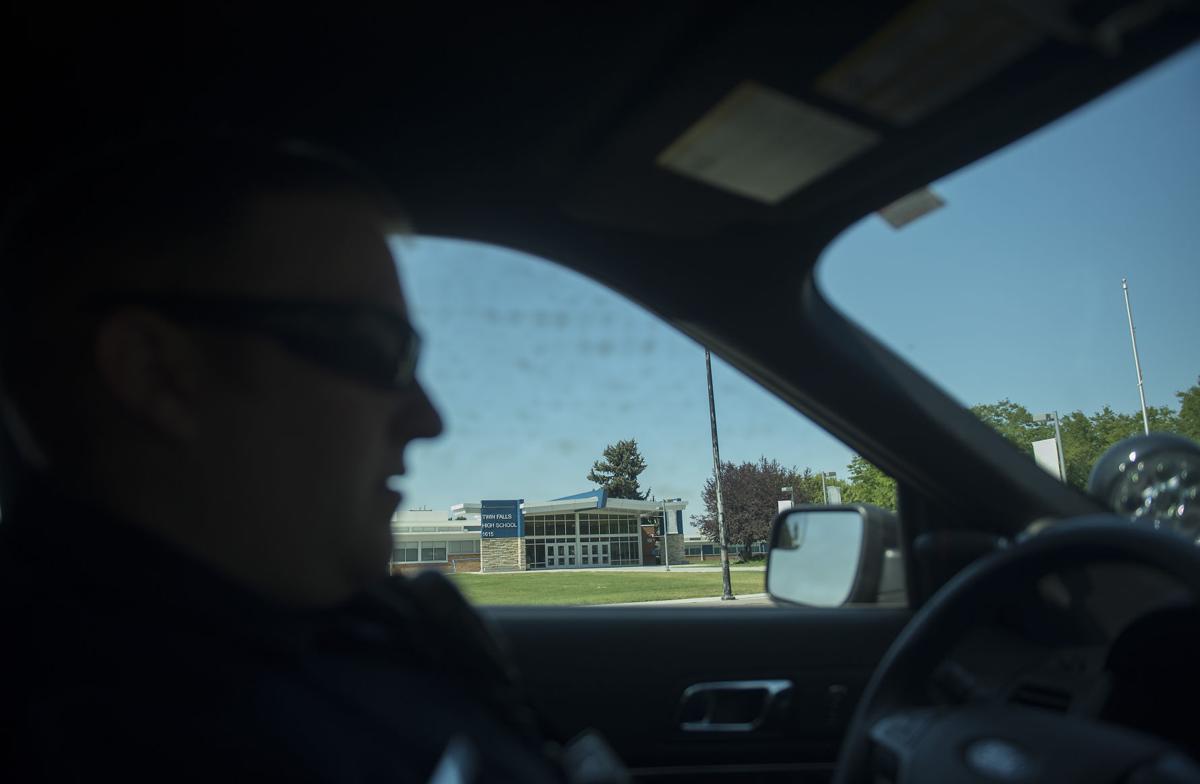 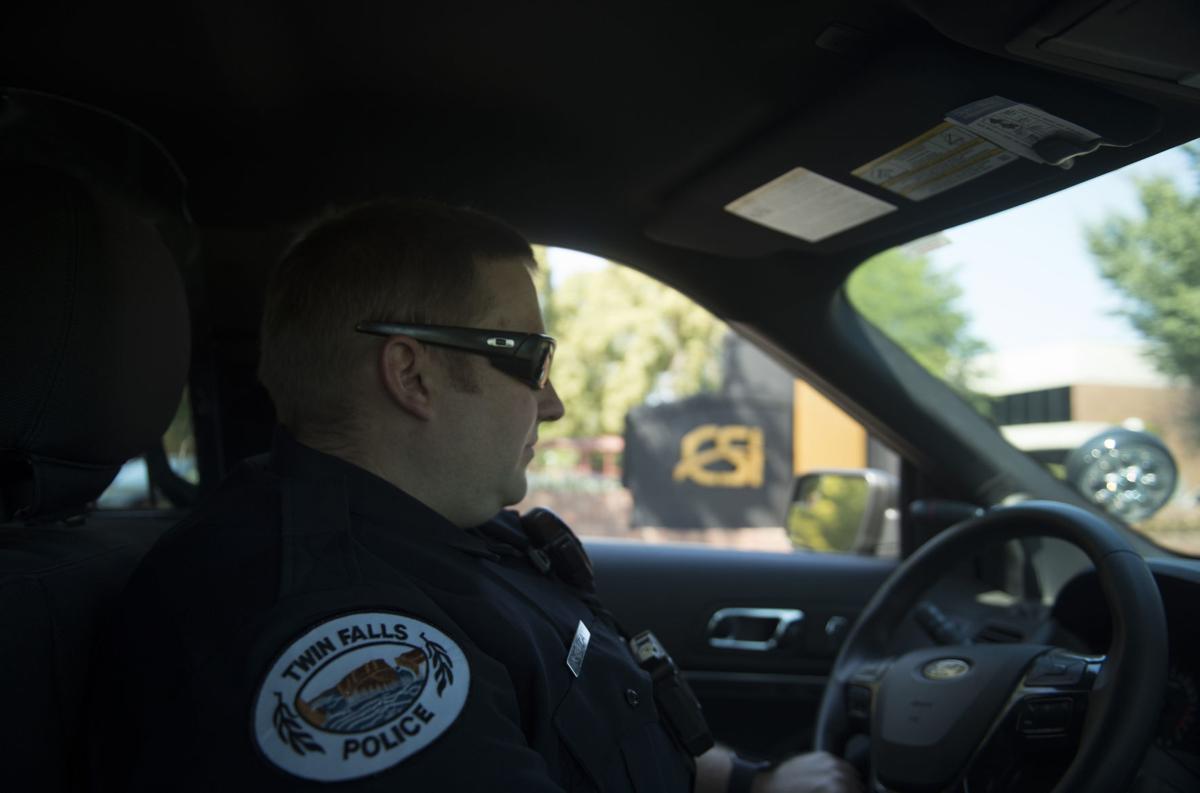 Officer Kyle Skuza drives through the College of Southern Idaho campus on his way back to the streets Monday, July 23, 2018, in Twin Falls. Skuza recently returned from school resource officer training in Idaho Falls and will be patrolling Magic Valley High School. 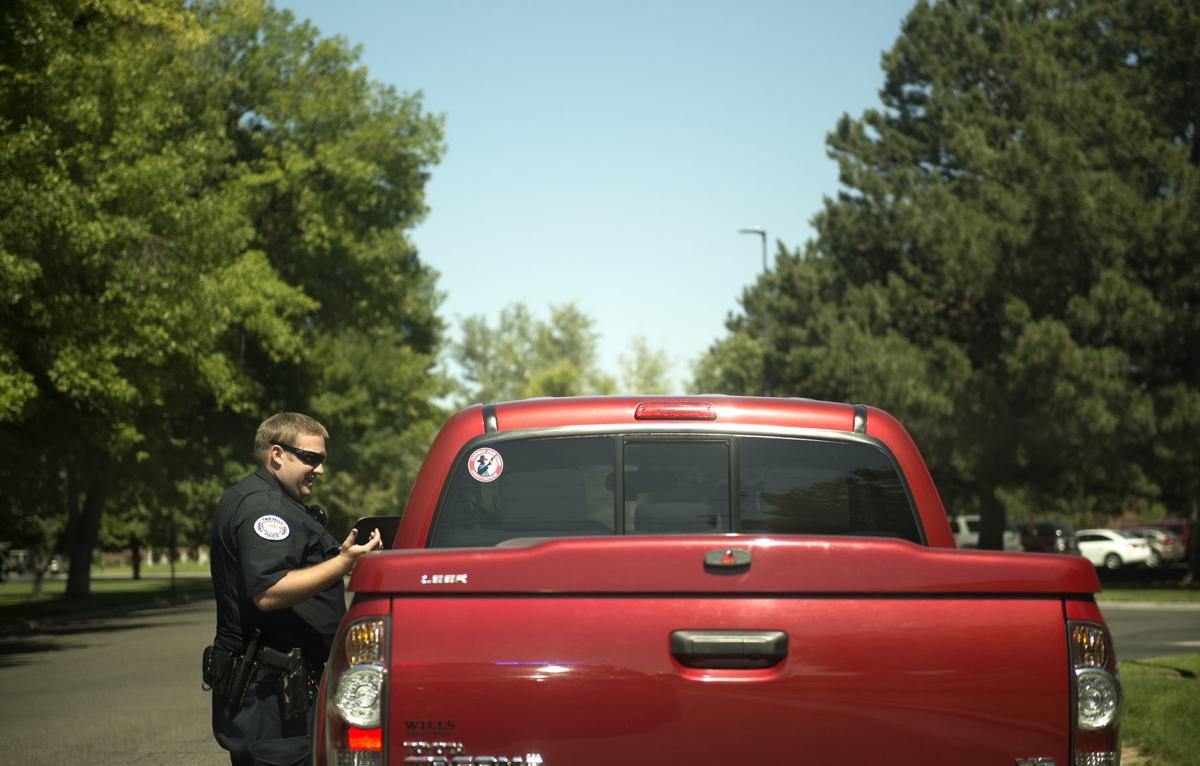 HAZELTON — It could take emergency responders more than 10 minutes to respond to the Valley School District’s rural and geographically isolated campus in Hazelton.

The approximately 500-student district in Jerome County is working to combat that issue.

In March, the school board voted to hire a school resource officer — the first one for the district — who’ll start in early August. Students return for a new school year Aug. 15.

“We’ve talked about locks and cameras and all that, but I think the number one issue for us is we’re out in a rural area and a rural setting,” Valley School District Superintendent Eric Anderson told the Times-News on Thursday.

School leaders and trustees decided it was more advantageous to hire an SRO than pursue other options. “We wanted to have somebody there immediately if something were to happen,” Anderson said.

Valley school leaders started having a discussion with the Jerome County Sheriff’s Office. The school district and sheriff’s office are splitting the cost of the new job position. The district will pay its half — approximately $24,000 — out of its general fund.

Many schools are making the push for tighter security as a result of school shootings nationwide and an uptick in the number of threats schools have received. But hiring security workers is just one piece of a broader effort, which also includes building renovations, emergency response systems and more security cameras.

For the past several years, the level of awareness of school security has increased due to “what’s gone on around the country with some of the school shootings,” Anderson said.

A proposed $18.67 million could be used to help schools hire and train SROs or other security personnel.

But many school districts are taking action now.

Up until this point in the Valley School District, Jerome County sheriff’s deputies came to the school anywhere from one to three times each week, for one or two hours at a time. But there wasn’t a full-time SRO.

Jerome County Sheriff’s Sgt. Matt West will be the SRO for the Valley School District. He has children in the school district, Anderson said, and felt it was a good opportunity.

West is out of the office on vacation and wasn’t available to comment for this story.

To get ready for the new SRO, the Valley district is doing a small remodeling project to build him an office. The district has also announced the change in its newsletter.

As for the feedback, “it’s all been positive, I can tell you that,” Anderson said.

Before deciding to hire an SRO, the district had already been working to boost security. Shortly after the February school shooting in Parkland, Fla., “we decided to take action right then,” Anderson said. “We locked all of our perimeter doors except one. We funneled all people in through one door and everything else is locked down.”

The new position, with an approximately $55,000 price tag, will be funded using a supplemental levy that voters approved in March.

Critchfield said she doesn’t know yet how the two SROs will split up their duties by geographic area. “The additional person will allow two people to have more of a presence at all of our schools.”

One particular concern, she said, is coverage of the outlying schools beyond Burley.

Stellers began his new position in November after retiring as assistant chief from the Hailey Police Department.

The student safety position was in existence last school year, but remained unfilled, Crocker said. The school district already has two SROs through a partnership with Hailey police.

It will cost $375,000, the equivalent of about $25,000 per employee, including salary and benefits. About $77,000 will come from the Safe and Drug-Free Schools program and $66,000 is available in new money from federal Title IV funds. The rest will be covered by cutting 5 percent from all supply budgets across the school district.

One playground aide position from each elementary school will also be converted to help fund the new paraprofessional positions.

Twin Falls Police Chief Craig Kingsbury and Capt. Matt Hicks were at a school board meeting earlier this month to show their support of the plan. The police department will provide training for the new district hires.

The district has employed SROs for years, Superintendent Brady Dickinson told the Times-News Monday. It has a total of six — one for every middle and high school. The officers also oversee elementary schools.

The district pays half the cost of SROs — spending a total of about $230,000 each year —and the city of Twin Falls picks up the other half.

“It’s a significant financial commitment having the six SROs we have,” Dickinson said.

District officials will evaluate how the new position is working and whether changes will be made the following school year. They also plan to closely watch what happens at the state level with any potential funding for school security personnel.

Earlier this month, some Twin Falls school trustees expressed concerns about finding enough security paraprofessionals, given the low pay rate. But so far, the district has seen a lot of interest and job applications.

“We’re encouraged by responses from folks,” Dickinson said, and calls from people interested in the job started coming in the day after the school board meeting. The first round of interviews will begin soon.

Hiring school security personnel is part of a whole package of increased security measures, Dickinson said. That includes working to upgrade entrances at the older school campuses to create security vestibules, implementing a Raptor visitor management system, and purchasing radios for every school administrator to allow them to communicate with other campuses and the school district office.

The biggest issue — whether to arm employees — comes down to training, Dickinson said, adding arming security personnel in the future hasn’t been ruled out.

If the schools were going to bring in armed workers, officials would want them to be highly trained and go through “shoot, don’t shoot” scenario training, he said.

Buhl School District plans to hire an SRO this school year if the city will budget for half the cost, Superintendent Ron Anthony wrote in an email to the Times-News.

The school district would pay its half using state Safe and Drug-Free Schools money.

Richfield School District shares an SRO with the Shoshone and Dietrich school districts. Superintendent Mike Smith is looking into using proposed state funding for school security — along with supplemental levy money — to see if it’s possible to pay for Richfield’s own SRO for next school year.

Jerome School District already has two SROs, with the expenses shared with the city of Jerome. It doesn’t plan to add additional officers, but the school board voted in June to allow SROs to wear body cameras for the upcoming school year.

Magic Valley workers: Look who's been hired, promoted and recognized so far in 2018

Magic Valley businesses can send in their new hires, promotions and award winners to Business Editor Heather Kennison at hkennison@magicvalley.com.

After 17 students were killed in a February shooting at a Florida high school, two Magic Valley students decided to take action in case the unthinkable happens here.

These industries had the fastest growth, highest wage increases in the Magic Valley

TWIN FALLS — What’s been the fastest-growing industry in south-central Idaho over the past decade?

'A big year': Follow this Hazelton family through the first day of kindergarten

HAZELTON — A school bus was ahead of schedule Wednesday morning and lingered on a gravel road in Hazelton, surrounded by corn fields.

Idaho schools look to boost security in wake of shootings

HAILEY — The Blaine County School District is seeking volunteers for the board of trustees, three board committees and a curriculum committee.

'We can't be too vigilant': Twin Falls school security workers start on the job

TWIN FALLS — A plant facilities levy passed by voters last year is already being put to use, with elementary schools getting more secure entra…

Officer Kyle Skuza drives through the College of Southern Idaho campus on his way back to the streets Monday, July 23, 2018, in Twin Falls. Skuza recently returned from school resource officer training in Idaho Falls and will be patrolling Magic Valley High School.