Originally posted on IdahoEdNews.org on June 6.

SPANAWAY, Wash. — Teachers Lynn Taylor and Karie McVey could hardly contain themselves when the state test scores came in. He’d done it.

“We jumped up and down,” Taylor said. “I mean, hyperventilating when we got the results because you never would have thought. And he did it.”

All year, the fifth-grade educators kept after a struggling student who read far below grade level, rarely completed his work and had little support at home.

None of those challenges were reason enough for the teachers to lower their academic expectations for the boy. Not at Evergreen Elementary, where “no excuses” is the law of the land.

So, if he didn’t turn in his homework, they’d keep him in class to get it done. If he couldn’t read a word problem, Taylor would read it aloud for him to solve.

“It would be so much easier to go, ‘Ah, nothing is ever going to change with a kid like that. Or, he’s never going to get it,’” Taylor said. “It’s in those moments that you’re like, ‘Oh, this is hard work.’”

It paid off. The boy passed the state exam for the first time, demonstrating proficiency at grade level.

Success is the expectation for every one of the 535 students at Evergreen in Washington’s Bethel School District. The school’s motto is that every student will be proficient in core subjects “without excuse and without exception.”

And most of them are.

In 2017-2018, 76 percent of all fifth-graders at Evergreen were proficient in English Language Arts, and 70 percent in math. Those numbers were at least 15 percentage points higher than the statewide averages.

It wasn’t always this way at the Spanaway school, which serves a majority low-income student base.

In 2005-06, Evergreen was ranked dead last of Bethel’s 15 elementaries, according to an award application the school submitted to the U.S. Department of Education.

That year, fewer than half of the school’s third-graders tested proficient in reading.

“We were literally considered the armpit of the district,” said kindergarten teacher Holly Weik. “…People wouldn’t even sub here it was so bad.”

What Evergreen does differently

In 2010 a group of Evergreen’s teachers went to a conference in California aimed at turning around struggling schools.

They discovered “No Excuses University,“ an educational model that aims to prepare every student for college by holding them to high standards and using data to measure and drive student improvement. More than 200 schools across the country use the model, according to the No Excuses website.

“No Excuses” unified the school, Taylor said. Before, some teachers had been making improvements individually; afterward staff members worked together to implement the no excuses model schoolwide.

“We were a well-oiled machine,” she said. “And you could feel it through the school.”

Evergreen officially joined the No Excuses University network — which costs about $130.00 a year in membership dues — in 2011.

As part of the cohort, the school adopted six core systems of No Excuses University and added two of their own:

The school has also a character-building program in place, which values traits such as trustworthiness, fairness and respect; and a building wide discipline system that requires teachers to enforce consistent behavioral standards, such as a no-talking in the hallways rule.

By 2013, two years after Evergreen joined No Excuses University, the school became the highest achieving elementary in its district.

For its high performance, Evergreen was recognized as a Blue Ribbon school by the U.S. Department of Education in 2018.

Only three of Holly Weik’s 21 students could read when they started kindergarten last year. By April, all but two were finishing books. Her students were writing paragraphs, testing on computers, and building model homes to demonstrate flood resistance.

“We never tell a kid they can’t do something,” Weik said. “You can’t say ‘I can’t,’ anywhere in the building.”

Evergreen is a different environment than when Weik started teaching there 21 years ago. Back then, Weik said, teachers underestimated how well some students could perform because they didn’t have support at home, came from families with generational poverty or had language barriers.

What changed, Weik said, was the teacher’s mindsets.

“We stopped blaming them and using that as an excuse, and turned it to where we took all the blame, all the responsibility,” she said. “We got anything they needed so that those wouldn’t be used as excuses anymore.”

Evergreen social worker Allyson Hammes helps families connect with housing, food resources and medical care. She gives children uniforms if they can’t afford them, and will wash clothes for children who don’t have access to a washer or dryer.

Poverty is not a reason for kids to slack in school under the “no excuses” model.

“We get it and we’re here to help you and support you,” Hammes said. “But you are not going to let the ‘low income’ label define who you are. We are going to overcome this.”

According to the data, it’s working.

Expectations are high. Teachers give students alarm clocks if they are regularly late to school. If they don’t show up, staff will sometimes go and get them. Students who don’t do their homework have to stay in from recess. No excuses.

“They’re usually nice when you get all your work done and you’re on task,” fifth-grader Dwight said. But “they can be strict if you just didn’t do your work or don’t try.”

And if a student’s home life is too chaotic or unstable for them to work at home, teachers allow them to come in at 8 a.m., more than an hour before the starting bell.

Every day, a few dozen show up in the morning, even if they don’t need the extra help.

“We think they show up for other reasons. To talk to us. Or be a part of our community,” she Taylor. “Maybe nobody is at home.”

Moving to Evergreen comes with a steep learning curve – for new students and teachers.

After the school’s transition into a No Excuses University (a national designation), principal Jamie Burnett said the staff dropped by a handful.

On average, he loses one or two teachers a year who don’t mesh with the Evergreen way.

“It’s the system, it’s the fit, but there’s also teachers that feel peer pressure if they’re not meeting a high level of scores,” Burnett said.

When the school first adopted the no excuses model, Taylor remembers staff members calling each other out during meetings for making excuses.

“It was so hard for people to say those words, and it was even harder for the person who was receiving it to take it, because it was true,” she said.

“It can be a very tough school,” said Jennifer Evans, who started at Evergreen five years ago. “You’ve got to be able to take criticism.”

Fighting the Effects of Poverty: Part 4

This special seven-part series from Idaho Education News looks at how poverty affects learning and achieving. But the series also shows the adverse trend can be broken, as demonstrated by successful schools in four states. The Times-News is publishing the series this week in print and at Magicvalley.com and will have additional coverage Sunday on how other Magic Valley schools are confronting this challenge.

CSI student body will soon be 25% Hispanic. Here's how it might help the school get more money

TWIN FALLS — Before Eunise Hilt ever attended the College of Southern Idaho she felt its influence in her household. She saw the guidance her …

After years of financial stress, leading to unstable housing and half a dozen different schools, Elise had made it to graduation.

‘Poverty is our biggest challenge in education’

Research highlights the long-running correlation between high poverty rates and low student performance — a “crisis” that has become the “norm” in schools across the nation, according to national experts William Parrett and Kathleen Budge.

Teachers at Peterson Elementary School say it takes a “village” of educators to improve learning outcomes for students in poverty.

Murtaugh defies the odds with early learning and math improvements

A 2010 grant has since dried up, but Murtaugh’s push to improve math instruction has grown.

Darlin Delgado’s past inspires her pursuit to help students in poverty.

How will Idaho reduce the education achievement gap?

Idaho’s education leaders and stakeholders have invested in — or considered — a range of measures aimed at improving the academic achievement of students in poverty.

TWIN FALLS — A pair of shoes could go a long way. 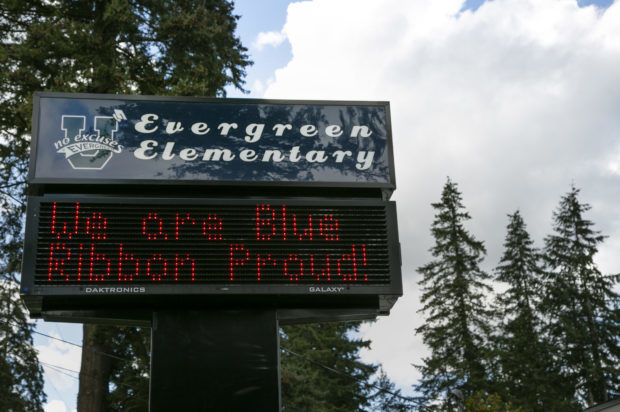 The US Department of Education awards the blue ribbon distinction to schools that have high performing students or have lowered the achievement gap. 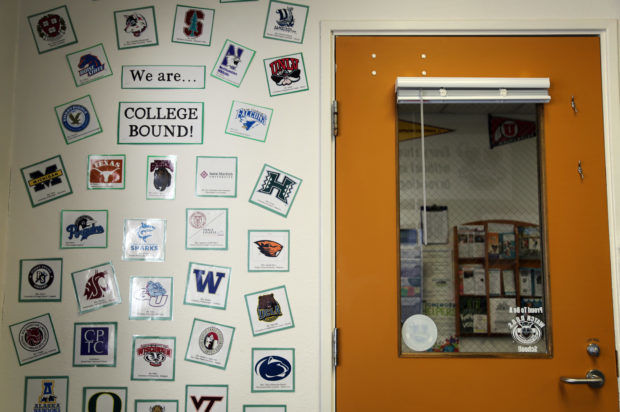 During morning announcements, Evergreen students recite the phrase “After high school comes college.” And each classroom adopts a specific university that students learn about.