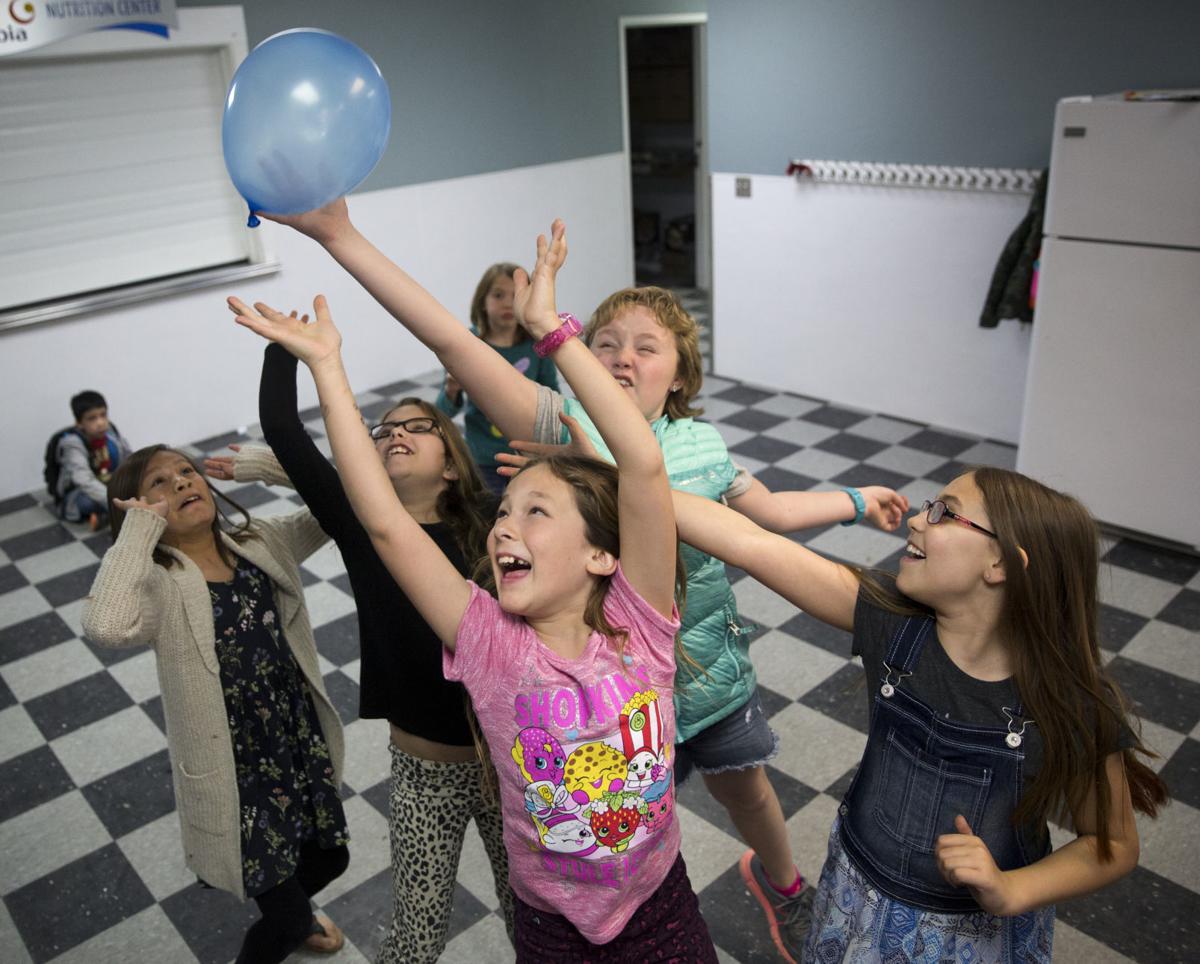 Clockwise from left, Raymaah Ronquillo, Ava Spearing, Brenda Jennings, Alexis Lancaster and Olivia Molina all go for the 'ball' during a game of balloon volleyball March 16, 2017, at the Boys and Girls Club of Magic Valley in Twin Falls. 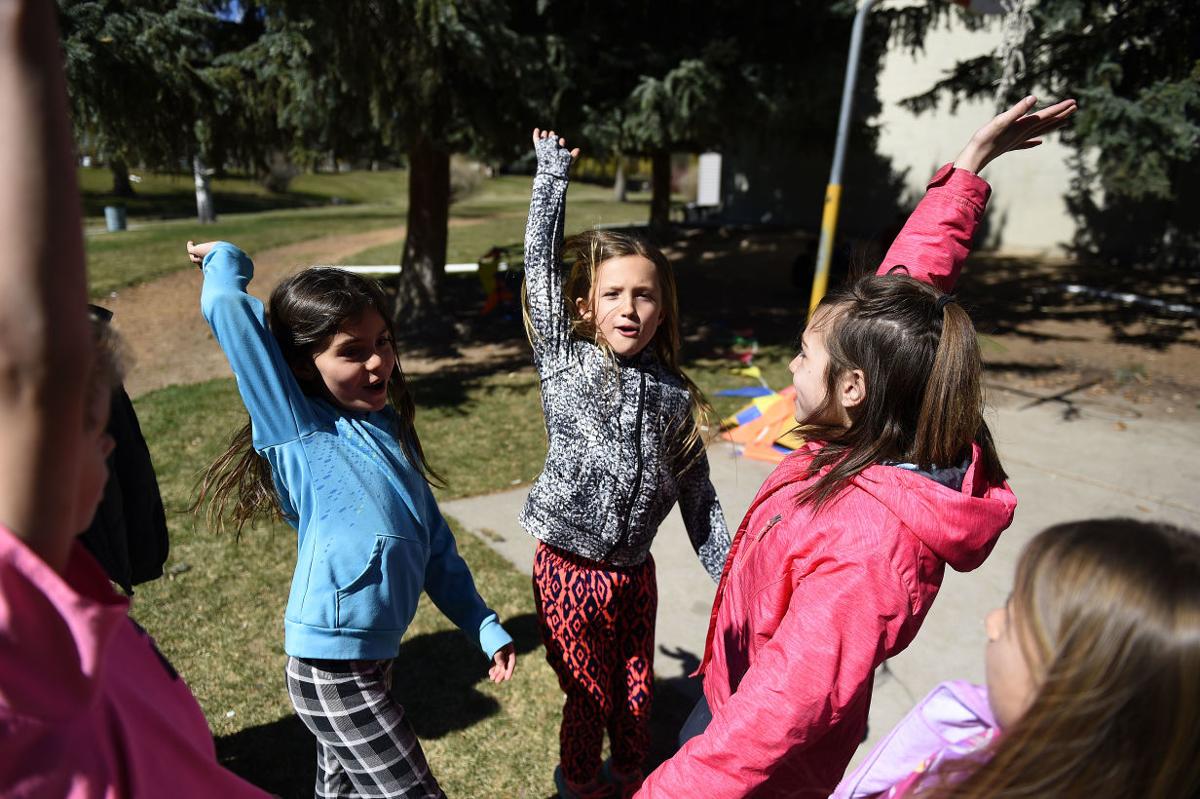 Kids play outside March 18, 2016 at the Boys and Girls Club in Twin Falls.

TWIN FALLS — The Boys & Girls Clubs of Magic Valley is moving forward with the second phase of an expansion project — an 8,000-square-foot addition to create space for a teen center and kindergarten program.

The nonprofit — which has clubs in Twin Falls, Buhl and Rupert — is seeing an increasing demand as the Magic Valley’s population continues to grow. But due to safety concerns and building space constraints, the Twin Falls club can’t serve every family in need and has a waiting list.

A capital campaign is underway and the nonprofit hopes to break ground on an addition to the Twin Falls club sometime in 2019.

“We have (had) a waiting list on and off for about four to five years,” executive director Lindsey Westburg said. “That has been a topic of conversation amongst our board and club leadership.”

The number of families on the waiting list varies but usually hovers around 75. With a waiting list, the expansion project is “really overdue,” said Mike McBride, a member of the nonprofit’s board of directors and chairman of the capital campaign. “This is something we really need to do.”

The Boys & Girls Clubs of Magic Valley has about 275 children attend on a daily basis at its Twin Falls club — before and after school, and on school holidays — and about 300 during the summertime.

Membership is only $20 per year, plus an added fee for some special programs. There scholarship options for families in need and no child is turned away due to inability to pay.

The fundraising goal for the capital campaign is about $1.9 million.

During the first phase of fundraising, the club brought in about $630,000 by approaching people who’ve donated in the past. Then, it sought funding from foundations and received up to a $600,000 match from the J.A. and Kathryn Albertson Family Foundation. Each donation the nonprofit receives through this spring will be matched at 100 percent.

“That was definitely a great and positive thing for our capital campaign,” Westburg said. Now, the club will go to the community seeking donations.

About three years ago, the club had some major work and renovations that were needed, Westburg said. “We had been here for 18 years and when you have upwards of 300 kids coming through your facility, things tend to wear out.”

Work included essentially gutting the inside of the facility — with updates such as new flooring and paint — and rebuilding the front lobby to enhance security. That was phase I of the expansion project, completed in summer 2016.

McBride has been a member of the nonprofit’s board for about one-and-a-half years and volunteered to help lead the charge to raise money for the expansion.

So often these days, families have both parents working, he said, and it’s important for children to have a safe place to go and receive enrichment in areas such as computers, robotics and science.

Program offerings enhance what’s already being done in the Twin Falls School District, McBride said, and allow children the opportunity to learn new things. “To me, that’s just a real plus for the community.”

Currently, teenagers are using two small offices at the Twin Falls club as their space. “Right now, we don’t have a space that we have for teens that is their own,” Westburg said.

The new teen center will be upstairs at the club and will have its own entrance so teens don’t have to come in through the front doors with the younger children.

“We really want to have a space for them,” Westburg said, adding there’s not much else beyond school extracurricular activities for teens to do in Twin Falls. “We want them to have a place they can come.”

The new space will have a coffee-shop feel, Westburg said. The teen program provides students with opportunities such as learning about college and job readiness. “We really need more space to be able to do that.”

Another program at the club that has seen immense growth is K-Netic, Westburg said. With half-day kindergarten classes in the Twin Falls School District, that leaves families with kindergartners looking for care for the other half-day.

K-Netic costs families $175 per month. The club provides transportation to and from school, meals, and care and activities when children aren’t in school.

McBride said he hopes if things go well with the capital campaign, groundbreaking will happen sometime in 2019. There are a few more grants from large organizations the Boys & Girls Clubs is pursuing, he said, as well as seeking community participation. “We’re asking people to step up and help if they can.”

'It was a murder in the full light of day': Biden

TWIN FALLS — Selina Gonzalez, 17, was named the 2019 Magic Valley Youth of the Year by the Boys & Girls Clubs of Magic Valley. The award i…

Here's how 4 Magic Valley nonprofits prepare for the holiday season

The Salvation Army of Twin Falls

RUPERT – The Boys & Girls Clubs of Magic Valley-Rupert Unit received a gift of $25,000 from Dot Foods.

TWIN FALLS – The Twin Falls School District is looking at ways to revamp some of its high school math class offerings.

TWIN FALLS — Children of the Magic Valley will soon have a multimillion-dollar facility to go to after school.

Clockwise from left, Raymaah Ronquillo, Ava Spearing, Brenda Jennings, Alexis Lancaster and Olivia Molina all go for the 'ball' during a game of balloon volleyball March 16, 2017, at the Boys and Girls Club of Magic Valley in Twin Falls.

Kids play outside March 18, 2016 at the Boys and Girls Club in Twin Falls.