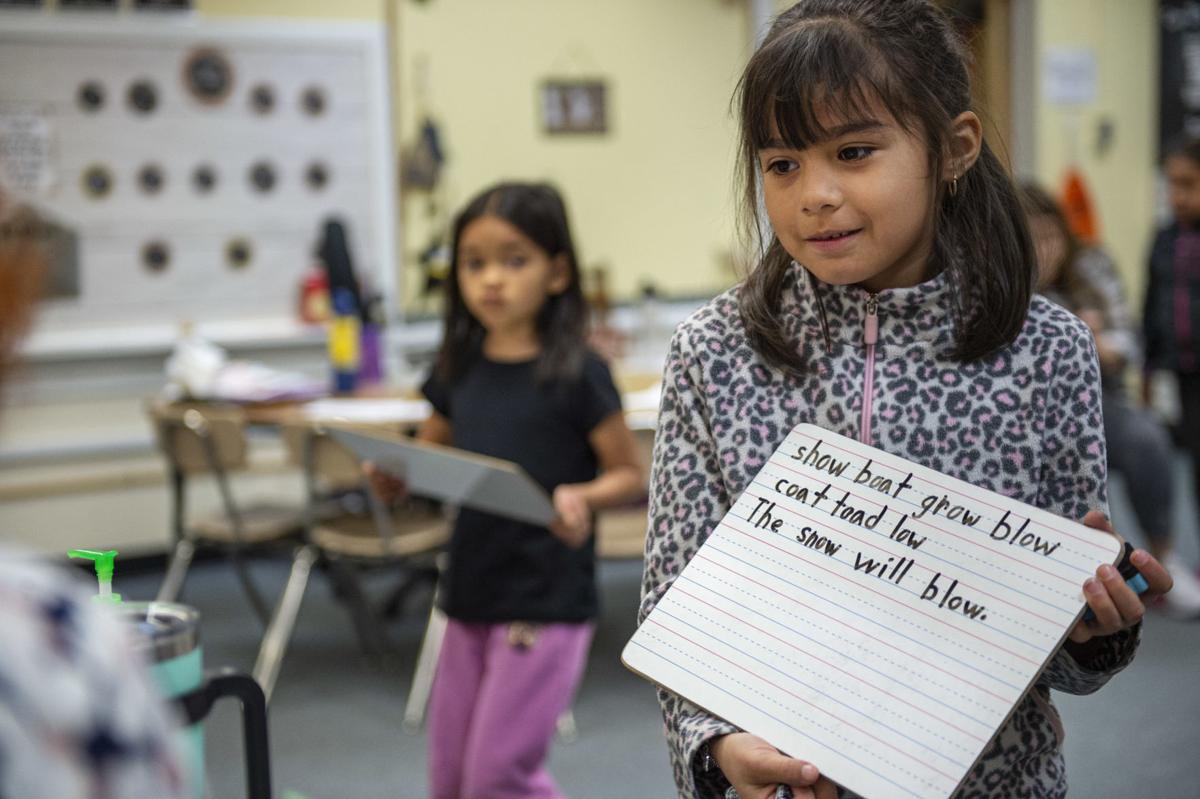 A student gets feedback from teacher Shawn Silva during her English language class Wednesday morning, March 11, 2020, at Jefferson Elementary School in Jerome. 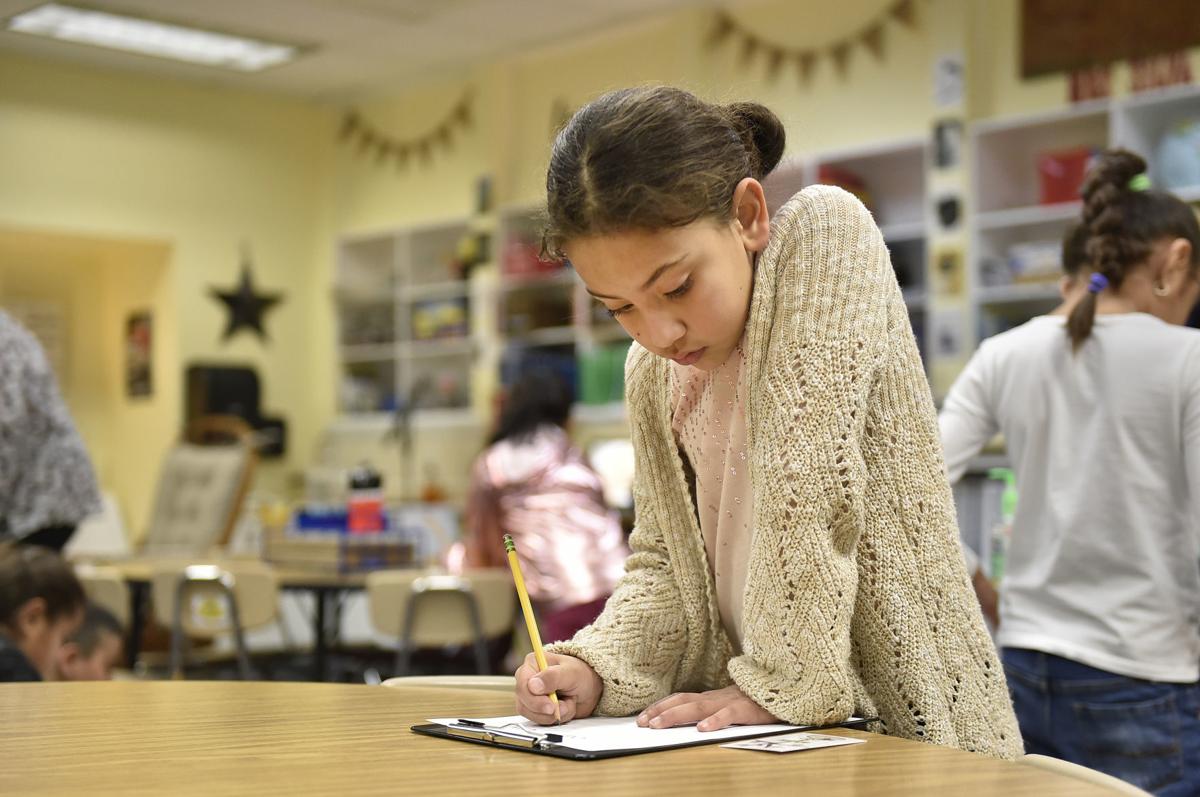 A first-grader writes down a word in English during Shawn Silva's English language class Wednesday morning, March 11, 2020, at Jefferson Elementary School in Jerome. 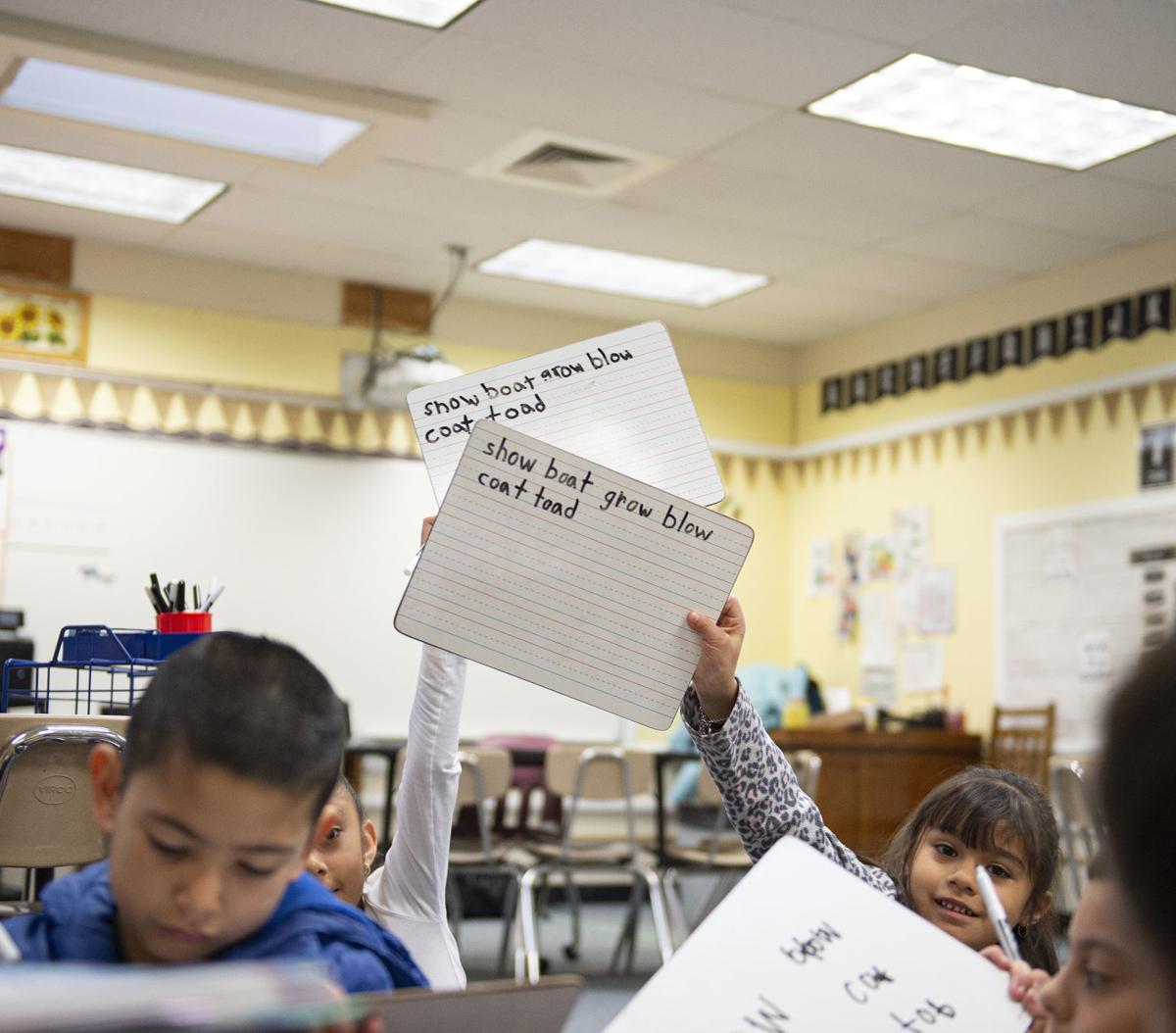 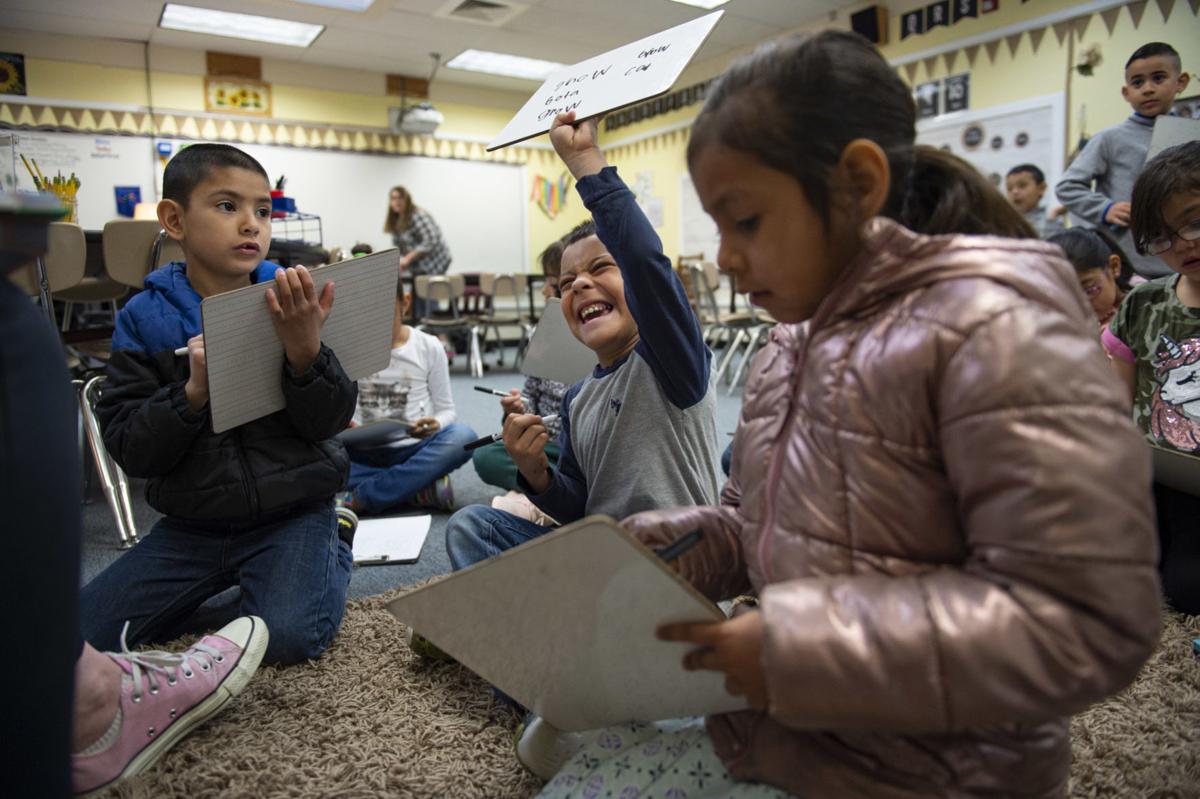 JEROME — A swarm of 12 first-graders bolted around the room, paper and pencil in hand in a scavenger hunt, searching for words pinned up on filing cabinets, above light switches and near their teacher’s desk in March.

Minutes later when they found most of the words, the students, all English-language learners, sat on a rug at English-language instructor Shawn Silva’s feet to prepare for the day’s spelling lesson. That Wednesday it was on the sounds “oa” and “ow.”

They gazed back at her in wonder as she parsed out the word “boat,” her mouth fitting around every letter. She did this once more, slower, asking her students to say the sounds in boat.

Buh. Oh. T. She marks each sound with a finger until she and her students held up three.

This is over as fast as it starts. A whole class period with Silva for each group is 25 to 30 minutes. Silva sees 100 students a day.

The Jerome Joint School District is shifting its focuses in its English-language learner program to address the growing demand. It surpassed Twin Falls School District, which hosts the Magic Valley’s newly-arrived refugee students, this year to become No. 6 in the state in number of students needing English-language assistance.

The district plans to outline a clear vision for student goals so that all district employees can help students learn language.

“Our population is slowly and continuously increasing,” Kim Lickley, the district’s grant writer and Title III coordinator, said. “We knew this was a point where we needed to change ... Doing the same thing over and over isn’t working.”

Education Northwest, the outside consultant hired to assess the district’s English as a second language programming, released its report on its findings in December, outlining six areas for improvement. One of them is a lack of instructors and paraprofessionals for the number of students needing assistance.

Jefferson Elementary is the school with the greatest need. There are 250 students identified as English learners and only Silva to instruct them along with paraprofessionals assisting her. The 100 she sees every day have been identified as most at-risk. The remaining 150 don’t receive her services.

“There are students who I wish I could see, but I can’t,” Silva said. “They need language and comprehensive instruction and I can’t give them that.”

The lack of qualified teachers is not unique to Jerome, where there are five licensed ESL professionals: three at the elementary level and one each at the middle and high schools. Of the approximately 200 English learning-certified teachers in the state, about one-third of them are in Boise, making schools in rural areas that typically have a higher amount of English-learners disproportionately underserved.

Limited staffing also means limited time for students to meet with instructors, which is partly why the school district wants to turn its focus toward giving regular instruction teachers the tools to help English-learners continue to pick up language skills in their classes. Scheduling issues also create disruptions for the students’ regular learning.

“Sometimes due to scheduling issues they have to be out for a time when it’s best for them not to be gone,” Silva said. “But we really try to make sure they’re not missing major instruction.”

Schools regularly assess students’ language proficiency, and those with the greatest need are given instruction as needed while others with strong English-language skills receive regular instruction. It is possible for some students to slip back into needing English-language instruction, which is why there needs to be continued opportunities for language acquisition, including interacting with peers.

“It can’t just be done with EL teachers,” Lickely said. “We all have to become experts on teaching language.”

The Jerome district uses an instruction model called Sheltered Instruction Observation Protocol that’s basic tenets are goal-oriented instruction, building background knowledge of students on a personal or cultural basis, a variety of instruction tools — such as video, diagrams and group work — and frequent assessment of both student achievement and lesson plans. The model requires clear objectives and structure to best serve English-learners.

But as with many Idaho schools, English-learners at Jerome schools have lower scores in applied language skills like speaking and writing, whereas listening and reading tend to hit or surpass state standards.

The school district has two other focuses that were identified in the assessment in addition to comprehensive language instruction. One is to provide clear language objectives that are addressed with each assessment and the other is to formalize a plan to create a clear vision for the English-learner program.

According to the Education Northwest evaluation, in 68% of classrooms surveyed had content objectives in place for students to review, while only 10% had language objectives. This means that language-learning expectations were not always made clear to students.

That can be difficult when in a position like Silva’s when class time runs for 30 minutes.

“Time is a huge challenge for us,” she said.

The Idaho Department of Education did not respond to requests for comment on state standards for English-language programs statewide.

While the COVID-19 pandemic required educators to make quick adjustments to serve students at a distance, Lickely said the majority of English-learners received instruction and were engaged at least at some point during the remainder of the school year with the help of bilingual support staff.

“It was always thought that we would only need to do this for two or three weeks,” Lickley said. “Then it turned into the rest of the school year. It’s been hit and miss depending on the family situation, but most have been engaged at least once a week.”

Lickley is concerned that without face-to-face instruction, students were lacking opportunities to pick up language and did not acquire as many skills as they would have in a classroom setting. This is especially concerning for new arrivals who enrolled in school just before the pandemic and didn’t pick up enough language skills to carry them through the summer. It is also troubling for those in Spanish-only households who don’t have experiences outside of school for picking up language, even if it’s just watching TV in English.

“I am concerned they are going to come back not having as much as they would if they were here,” Lickley said. “. . .With English-learners in a home that’s all Spanish-speaking, there’s going to be a gap.”

It remains unclear what the next school year will look like for Idaho schools as the state recovers from the pandemic. It did not delay refocusing plans for the English-Language Learner program and talks about its implementation are continuing.

Educators said that it is imperative that all staff be on board for the program’s success.

“These EL students are not my students. They are our students,” Silva said. “And they need language instruction all day long.”

Through the lenses of Times-News photographers, a look into the classrooms of the Magic Valley.

Kylee Evans from Gooding finished as the top cowgirl and Wes Shaw from Dietrich was the top cowboy in the District V high school rodeo after district finals concluded on Saturday.

In five of the Magic Valley's eight counties, Latinos made up more than 50% of cases. The types of jobs Latinos tend to work and larger family sizes play a role, but experts say this is an expression of structural shortcomings in the health care system.

A student gets feedback from teacher Shawn Silva during her English language class Wednesday morning, March 11, 2020, at Jefferson Elementary School in Jerome.

A first-grader writes down a word in English during Shawn Silva's English language class Wednesday morning, March 11, 2020, at Jefferson Elementary School in Jerome.