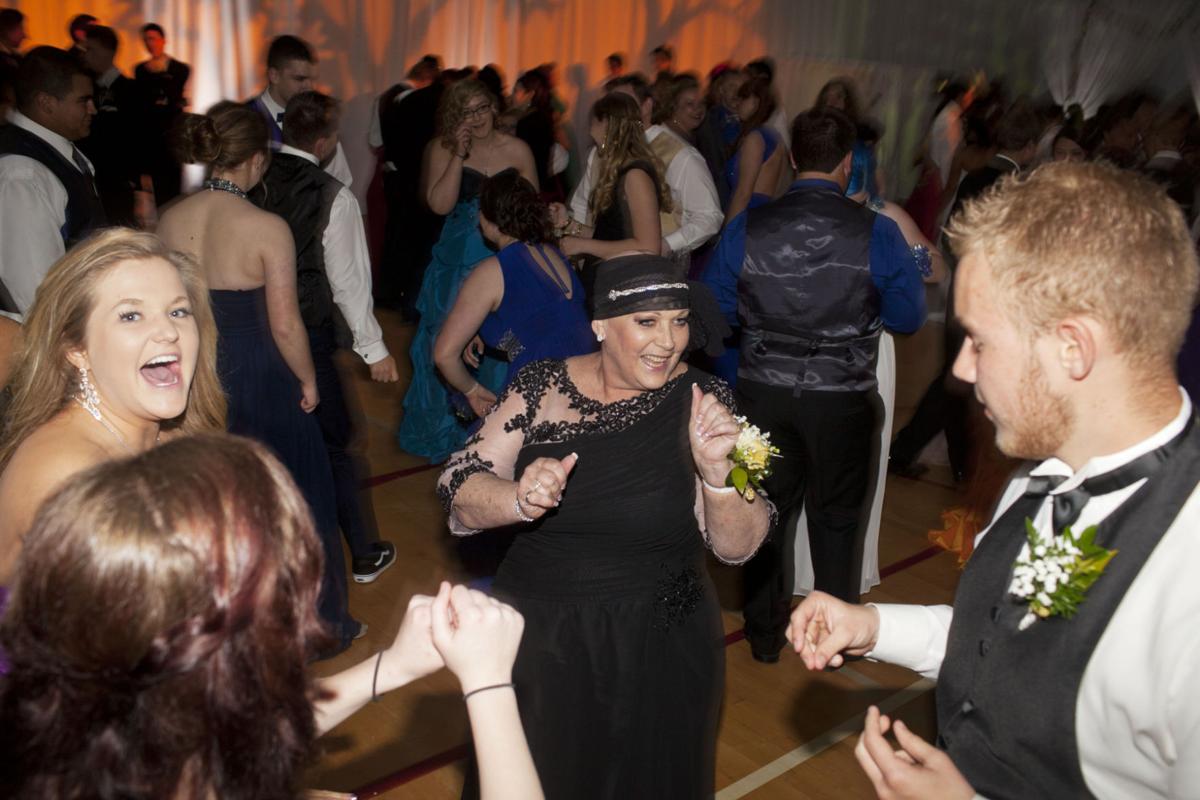 Kerry Huffaker, center, dances with her son Dylan and his friends at the Canyon Ridge High School prom in May 2016 in Twin Falls. 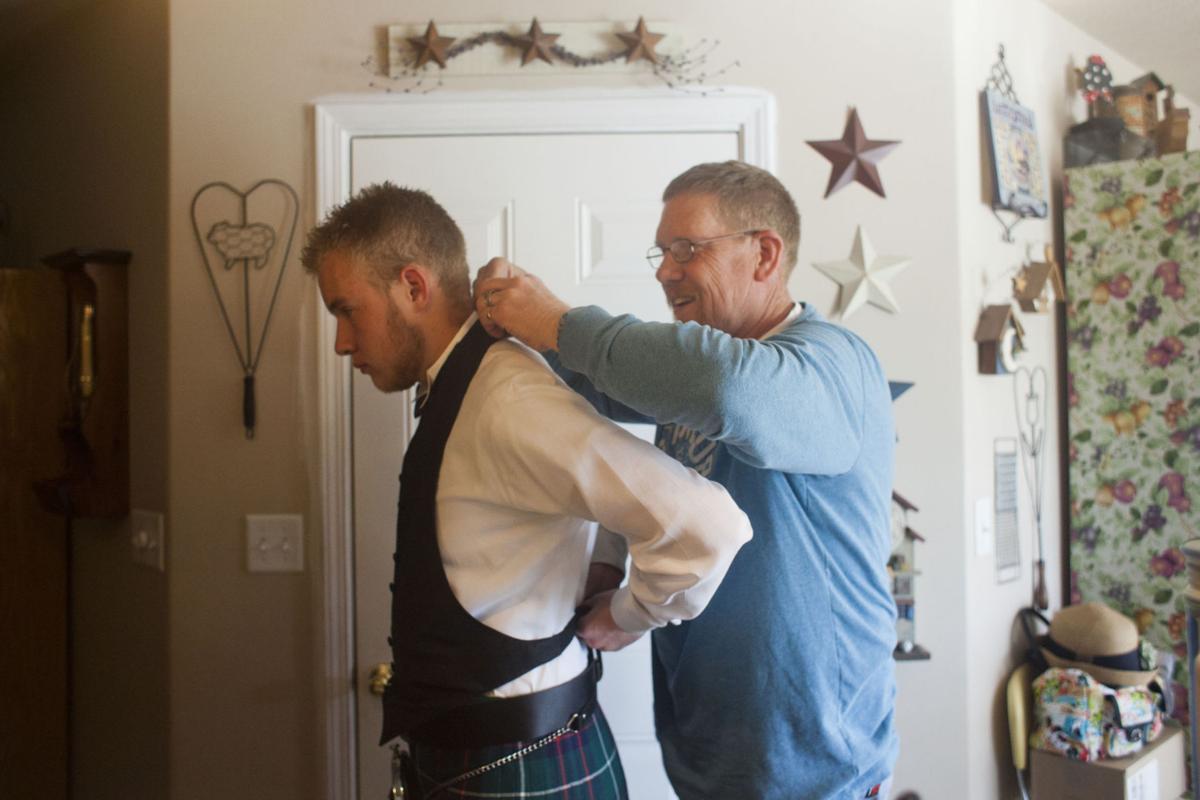 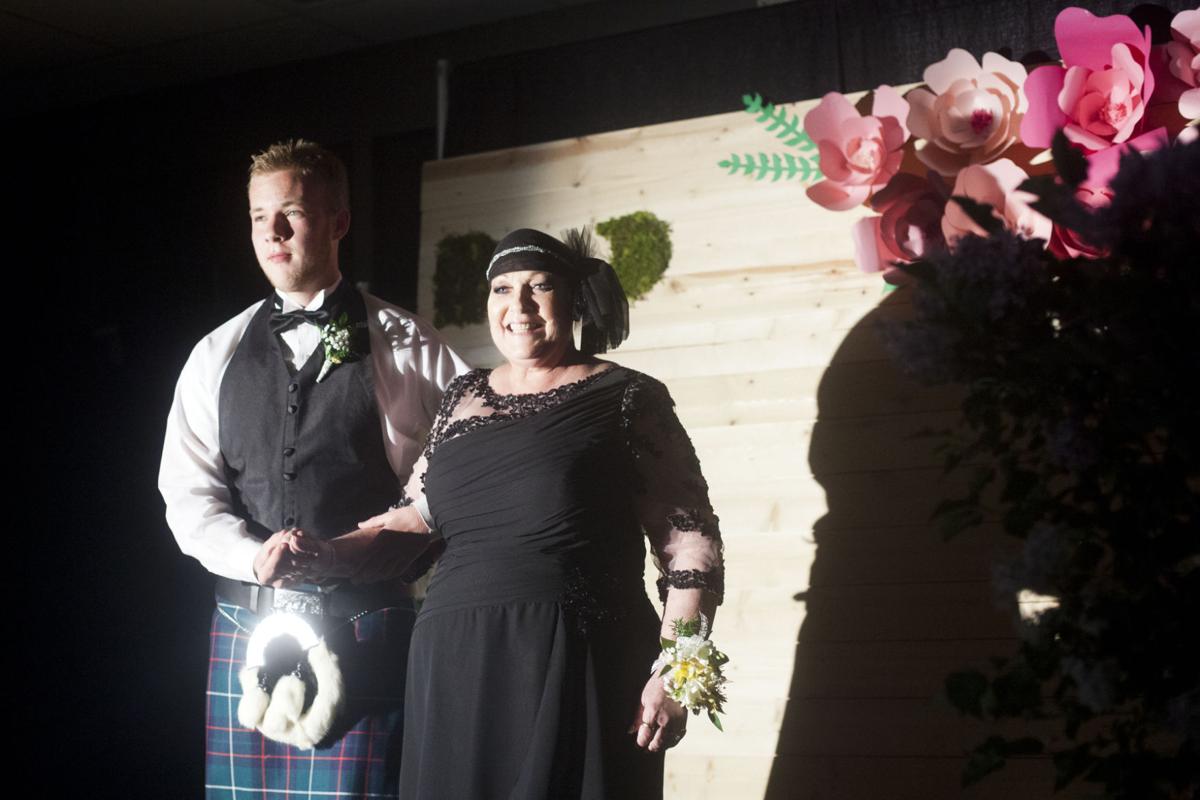 Senior Dylan Huffaker and his mother Kerry at the Canyon Ridge High School prom on Saturday in Twin Falls. 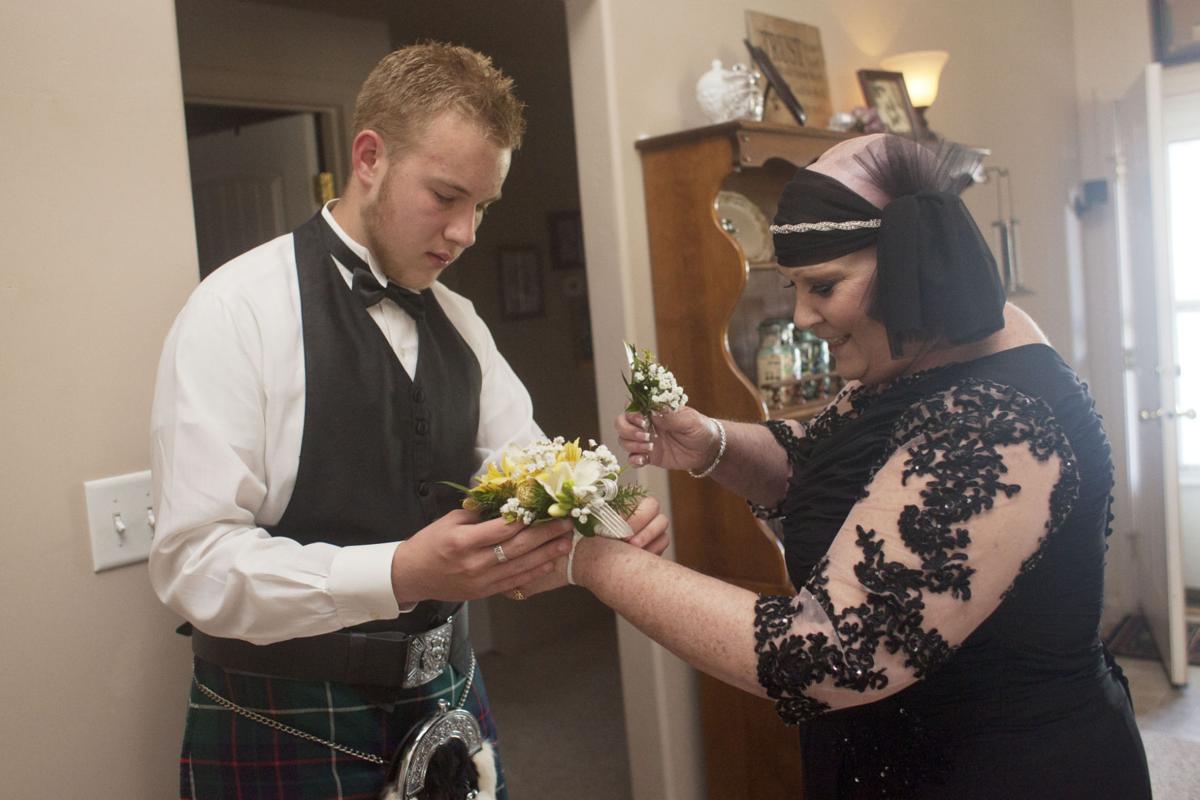 TWIN FALLS • Kerry Huffaker dreams of dancing with her son on his wedding day.

But earlier this year, a life-altering diagnosis shattered her plan.

She found out she has the most aggressive form of brain cancer, and may have only nine to 20 months to live.

“I’ve really tried to keep my head in today,” Huffaker said last Tuesday while sitting on a sofa in her Twin Falls home. But “things pop up and scare me,” she said — like who’s going to dance with her 17-year-old son Dylan at his wedding?

Kerry’s wish of dancing with her son came true Saturday — just in a different way than she imagined. She was her son’s date at Canyon Ridge High School’s prom, held in the school gymnasium.

“He took it from there and asked his old, bald mom to prom so I get to dance with him,” Huffaker said last week, and she began to cry. As she wiped tears from her eyes with a crumpled-up tissue, Dylan reached over to hold her hand.

“In my eyes, my mom will look beautiful,” he said.

Dylan, a senior at Canyon Ridge High, wanted to thank his mother for everything she did for him through his 17 years of childhood. “Sadly, I put her though a lot of rough times,” he said. “I owe her this.”

But Dylan got an enthusiastic nod of approval. “Right away, I thought it was a worthwhile exception,” Teske said. He’s close with the Huffaker family, both through school and church. “I commend Dylan for having the idea to do it.”

One school day, Dylan left campus during his release period — a block of time when he doesn’t have class. He went WinCo Foods, where he works, and asked bakery workers to write “Will you go to prom with me?” in colorful icing on top of chocolate doughnuts — one word per doughnut.

His mother often craves the chocolate pastries after chemotherapy and radiation treatments.

Dylan stood in a waiting room at St. Luke’s Mountain States Tumor Institute in Twin Falls with his aunt waiting for his mother to come out.

When Kerry walked into the room, she didn’t notice Dylan at first. But after seeing him, he handed her the box of treats. She opened it, read the message, “and the water works started,” Dylan said. His aunt videotaped the whole thing.

As they left St. Luke’s, Kerry was already talking about logistics — especially, what she’d wear. That’s when Melissa Osen, a social worker at MSTI, stepped into help. But she decided the details of prom night would be a surprise for Kerry.

She called Gregg Middlekauff — owner of Middlekauff Ford Lincoln — to ask about using a vehicle, because she couldn’t find a limousine to rent. Middlekauff donated a car, a dress for Kerry and dinner at Canyon Crest Dining & Event Center.

JeniB Photography took professional photos of the mother-son duo on prom night and Lovely Nails & Spa — Kerry’s favorite salon — provided a manicure and pedicure. Kerry found a black dress at Christa’s Dress Shoppe and Tuxedo, which arranged for someone to do her makeup.

“They’re just an amazing family,” she said about the Huffakers. “They’ve kind of all rallied around her.”

For Dylan, going to prom with his mother was a chance to share an important moment in his life with her. “I get to do something that not very many get to do,” he said last week. And he joked, “In a way, she’s chaperoning me and in a way, she’s not.”

“I’m just grateful we get to share this together,” Kerry said to her son.

In November, Kerry mourned the death of her 89-year-old mother. Three weeks later, she started noticing symptoms of what she thought was a pinched nerve affecting her left side.

She was having episodes every few weeks — lasting about five minutes — she didn’t realize were seizures.

She was busy getting ready for Christmas and put off seeing a doctor.

But in late January, one seizure lasted much longer — about an hour — and she was taken to the emergency room. “They thought I was having a stroke,” Huffaker said, and she went to see a neurologist at University Hospital in Salt Lake City.

She found out she had a golf ball-sized brain tumor. The doctor and his colleagues had never seen anything like it, Huffaker said, “which was kind of scary.”

At first, they thought it could be a low-grade tumor. They decided she’d wait until the end of the month for another MRI.

But Huffaker got a call a few days later saying it was worse than they expected.

She was scheduled for surgery Feb. 18.

The day after, she found out it was a high-grade tumor. She was diagnosed with glioblastoma multiforme — the worst, more aggressive type of brain cancer. About 90 percent of people diagnosed with it have nine to 20 months to live, she said.

There’s a 10 percent chance she’ll react to treatment well, she said, and could live for three to five years.

But eventually, cancer cells won’t be wiped out by chemotherapy, she said. “They grow like morning glory down through your brain.”

Kerry finished her first round of radiation and chemotherapy April 22. She has five weeks off from treatment. “Then, we start the big stuff,” she said, and she’ll take chemotherapy pills for six months.

She also qualified for a clinical trial, with a 50-50 chance she’ll be in the group that receives an experimental medication.

So far, Kerry said, there haven’t been signs of complications or seizures since she started cancer treatment. But “nausea has kicked my butt.”

Dylan was making post-high school plans when he found out his mother has cancer. “When my mom got sick, I threw it out the window,” he said.

Now, he’s deciding whether to attend the College of Southern Idaho in the fall or find a job. Either way, her son plans to continue living at home for now, Kerry said.

“He’s sticking around to watch over his mama for a bit.”

Kerry Huffaker, center, dances with her son Dylan and his friends at the Canyon Ridge High School prom in May 2016 in Twin Falls.

Senior Dylan Huffaker and his mother Kerry at the Canyon Ridge High School prom on Saturday in Twin Falls.