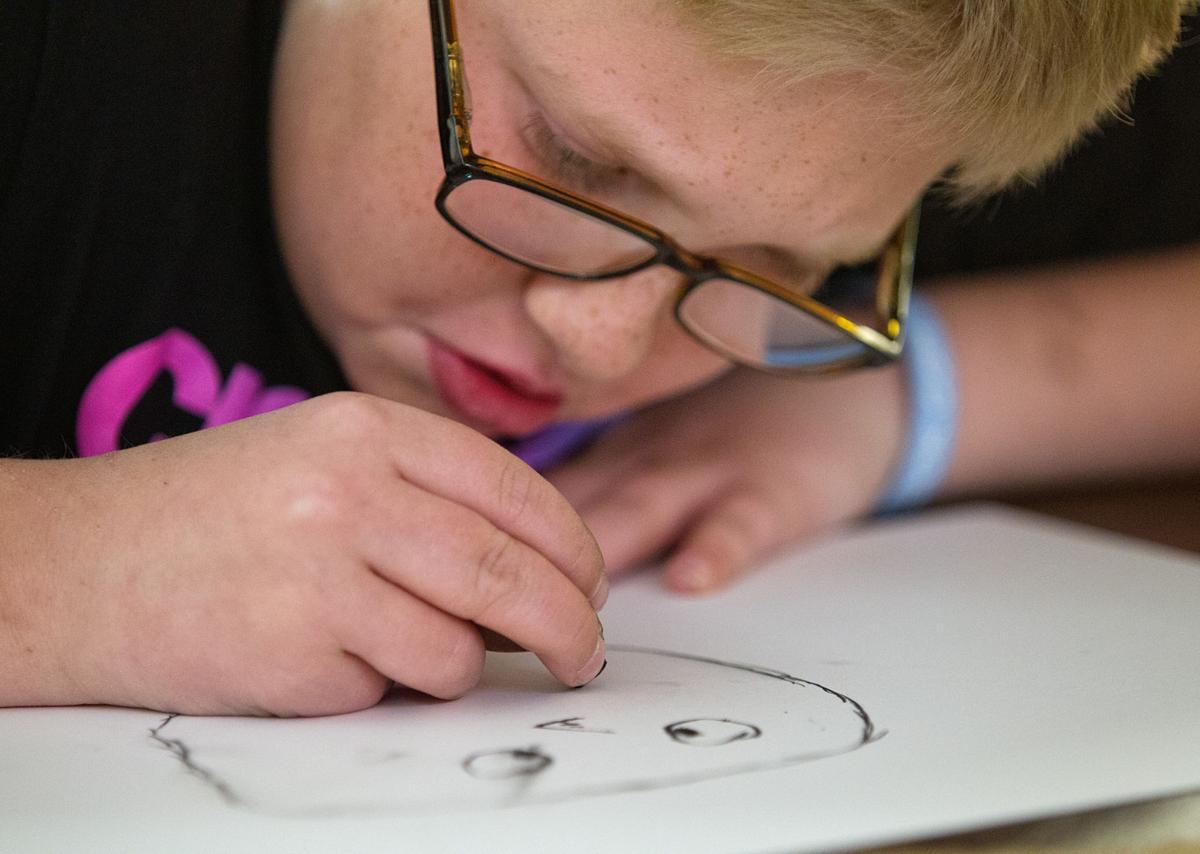 Ethyn Orbe, 12, works on his own drawing inspired by the work of Artist James Castle on Wednesday at the Idaho School for the Deaf and Blind in Gooding. 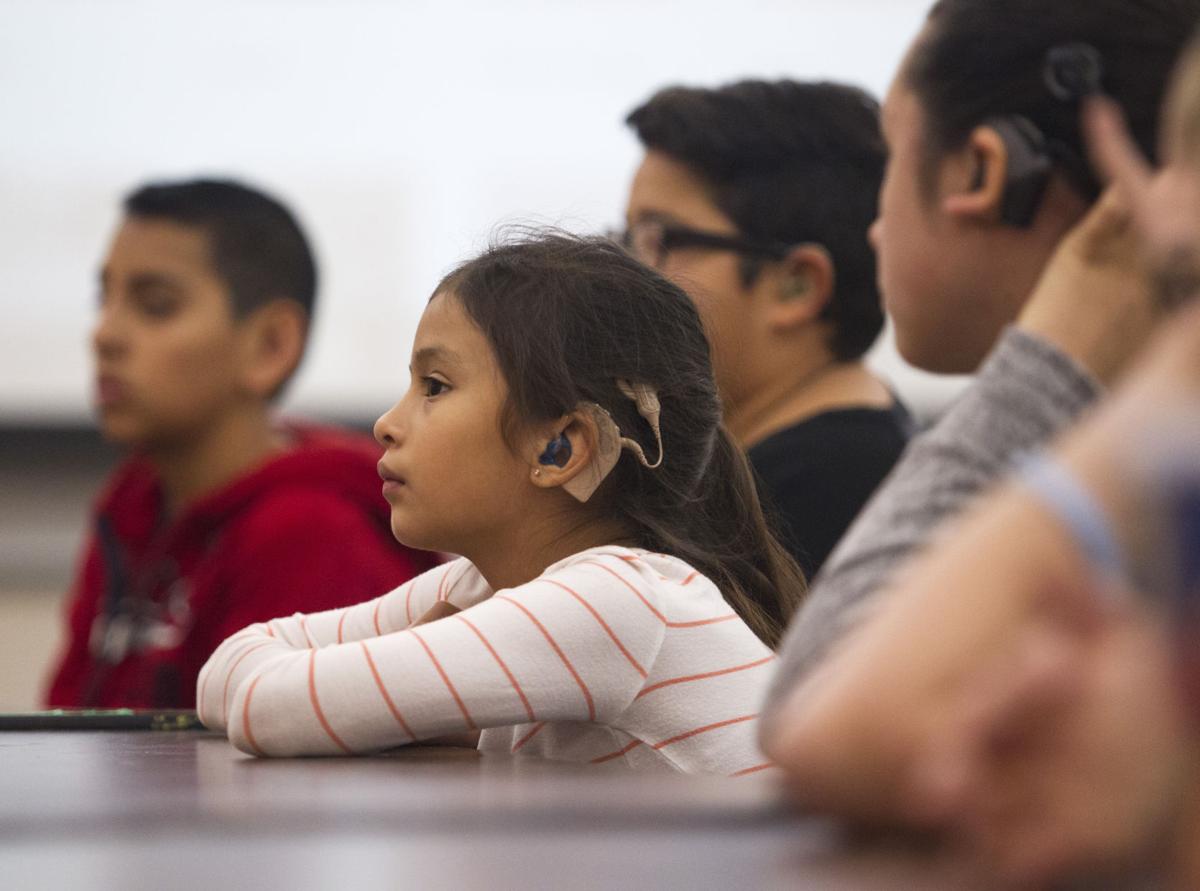 Natalie Benitez, 8, listens to a speech about Artist James Castle and his work Wednesday at the Idaho School for the Deaf and Blind in Gooding. 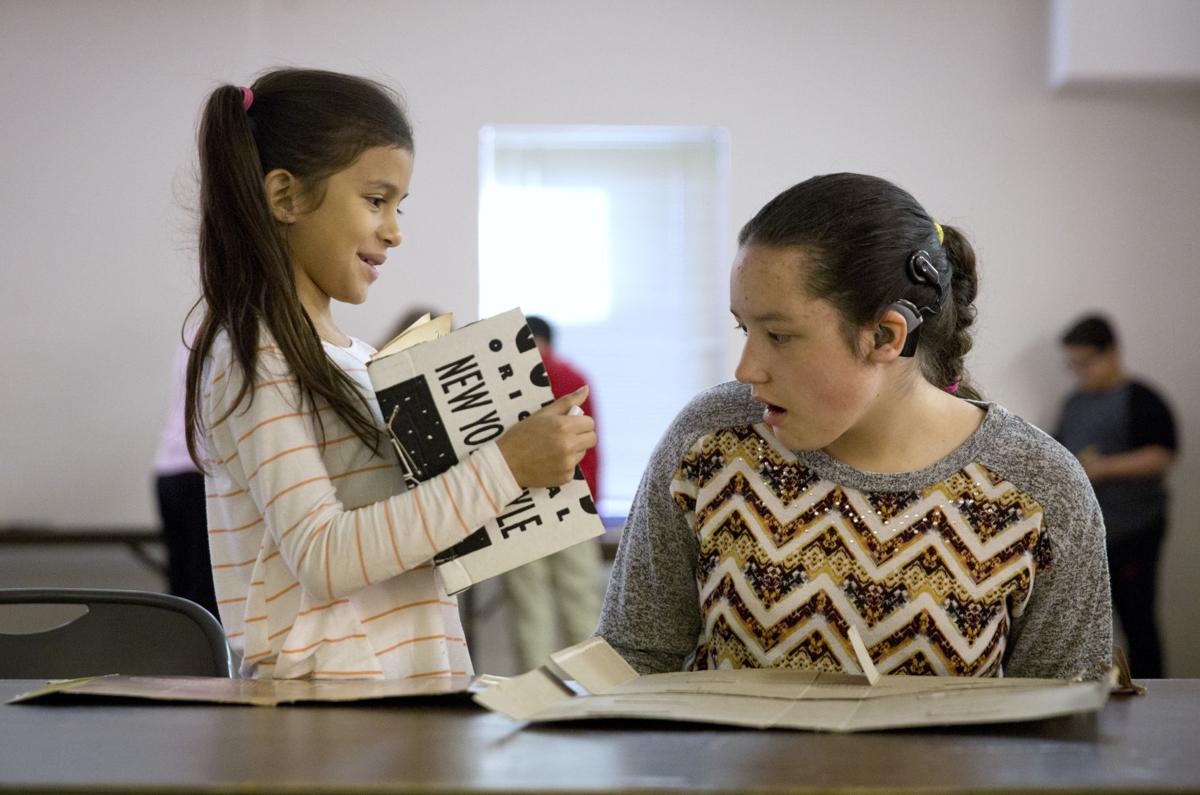 Natalie Benitez, left, shows Alexia Cooper her artwork Wednesday at the Idaho School for the Deaf and Blind in Gooding. 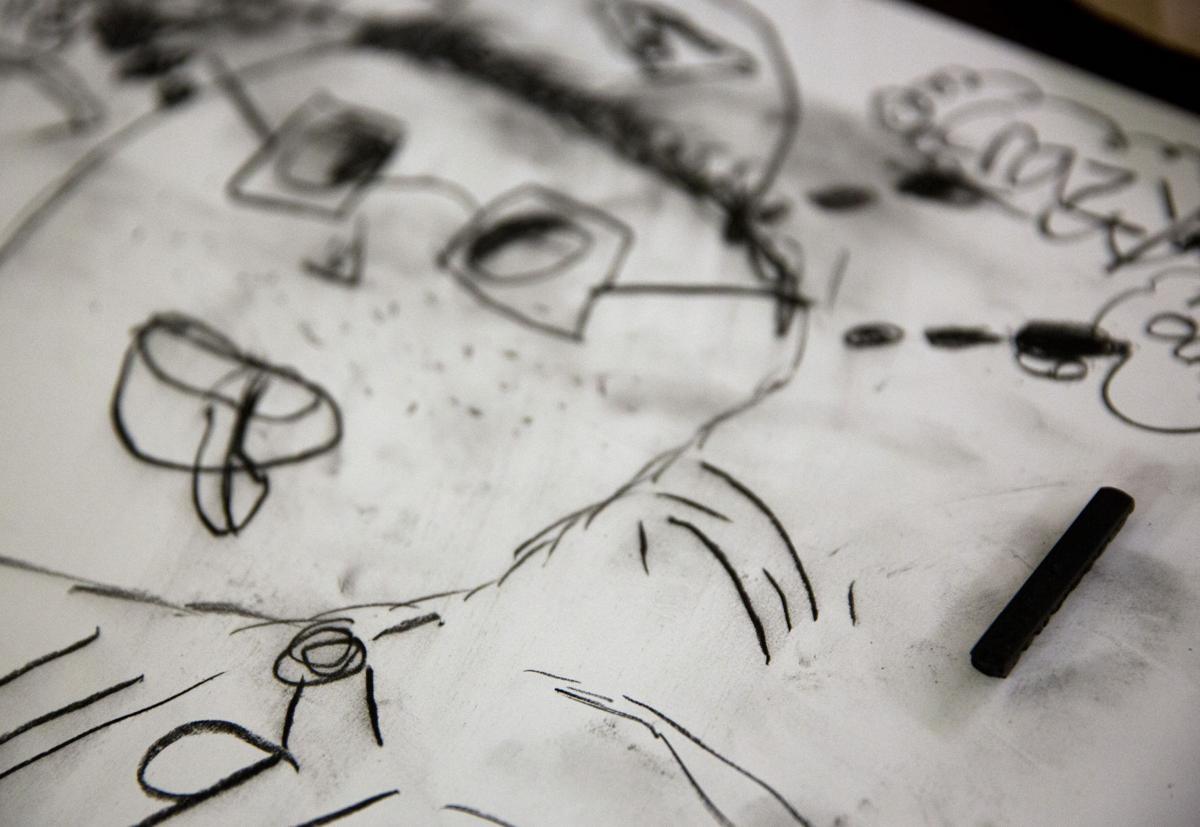 Ethyne Orbe's charcoal drawing inspired by the work of Artist James Castle sits on his desk Wednesday at the Idaho School for the Deaf and Blind in Gooding. 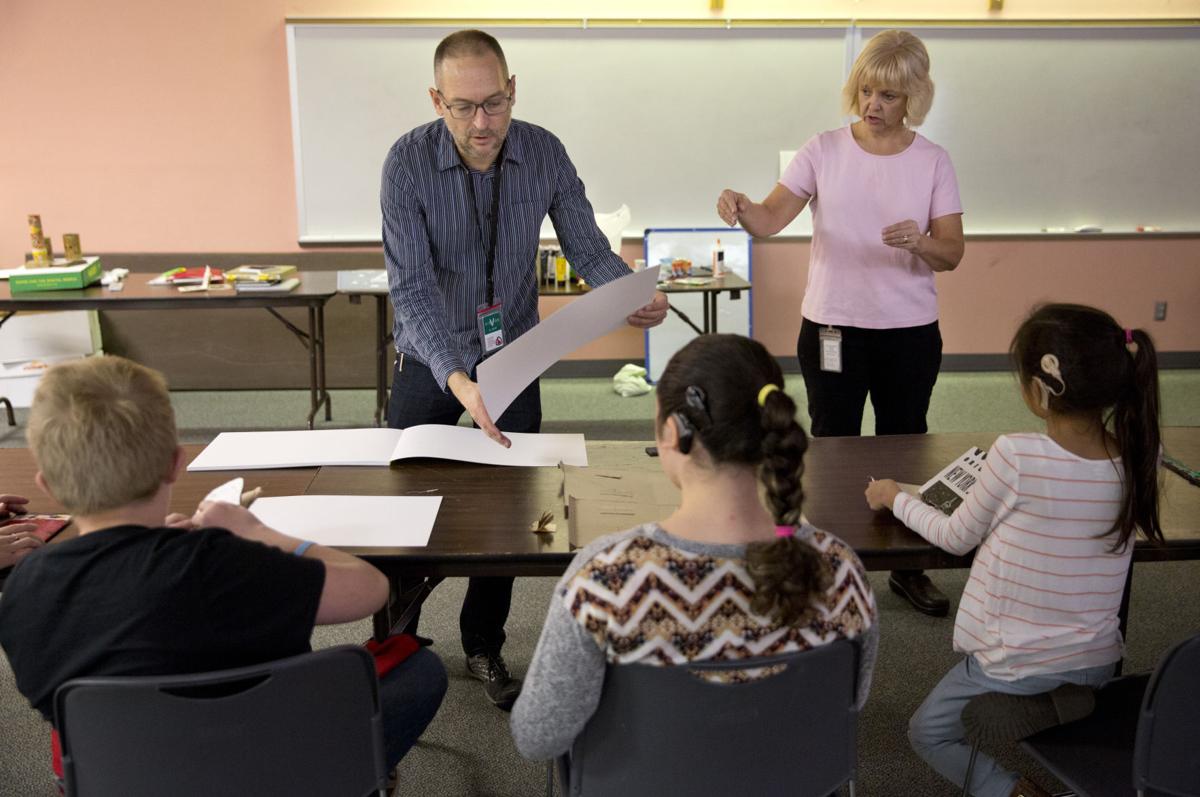 Artist Educator Troy Passey hands out archival paper and charcoal for students to use Wednesday, Nov. 9, 2016, at the Idaho School for the Deaf and Blind in Gooding.

TWIN FALLS — James Castle is still connecting with others, without saying a word.

Students learned about the Idaho artist Wednesday during a workshop at the Idaho School for the Deaf and the Blind. Castle, who was deaf, attended the school as a boy. He is known for making art with recycled items such as cardboard and soot. As an adult, he found his materials by checking trash containers throughout his immediate neighborhood.

Troy Passey, a teaching artist for the Idaho Commission for the Arts, taught the three-day class. The workshop was funded by a $2,500 grant from the Arts Powered Schools Summer Institute.

Ethyn Orbe, 12, drew a self-portrait of himself wearing a hat with the words “Crazy” and “Peace out” around his head.

Ethyn signed that he has enjoyed the art class about the former ISDB student.

Castle was born Sept. 25, 1899, in the small town of Garden Valley. He starting drawing and making artwork from found materials from a very early age. He was a prolific artist who drew pictures of houses, rural life, clothing, horizons, numbers and words.

Castle didn’t start school until he was 10. He attended and lived at ISDB from 1910 through 1915. While there, Castle was taught the oral method of communication because sign language was not taught in public schools at the time.

“James Castle is my favorite artist,” Passey said. “He’s just amazing. He’s an acquired taste. You have to go to him.”

When Castle left the school, Passey said his art supplies were taken away in an effort to make him vocalize to communicate.

“When he got his art supplies taken away,” Passey said, “that’s when he got the most creative.”

In her ninth year teaching at ISDB, Billing took part in a grant-writing workshop and pitched her idea to combine Castle’s work with Idaho history and the theme of “Idahome.” She received a $2,500 grant for the Castle workshop that brought in Passey. She also applied for and received a $1,500 grant to hold a four-day dance residency a few years ago for students pre-kindergarten through fifth-grade at ISDB. Students learned about animals and interpreted their movements through modern dance.

The Arts Powered Schools Summer Institute is held by the Idaho Commission on the Arts along with the Idaho State Department of Education. It’s designed to immerse K-8 teachers, school administrators, and ICA teaching artists in a week-long gathering to come up with ways to integrate the arts in core curriculum.

Billing said she chose the theme is “Idahome” because ISDB is often a home away from home for many children.

“This is where they fit in and have open communication for them,” she said. “He (Castle) drew a lot of houses. The concept of home and a house of his own was really important to him.”

“I was in band, choir, speech and drama,” Billing said. “It made a huge difference for me. I was a shy kid until fifth grade. I’ve seen these students totally come out of their shells.”

Over the three days, students worked on two projects: a hand-stitched book and a piece of art that represented “home” for them. Blind and visually impaired students used textures that reminded them of home, which included embossed labels and Braille.

Castle became famous in the 1950s when his nephew Bob Beach came home on a break from the Museum Art School in Portland, Ore. Beach took some of his uncle’s drawings to show his professors. Castle died in 1977, and his family was so overwhelmed by the interest in his work that they denied access to his collection for 20 years.

Passey said people often say Castle’s work is too simple, but that’s where he finds its beauty.

Ethyn used part of a cereal box to represent what “home” meant to him. He painted the rectangle red with small black circles to represent eyes, arms and feet. He said it represented his father, who died four years ago.

“It reminded me of home,” he said.

He painted it red because that was his favorite color.

Ethyn also made a video game controller because he likes to play games when he goes home.

For 11-year-old Alexia Cooper, home is a place and a person.

Alexia drew a picture of the old dormitory where Castle used to live on two pieces of a brown paper bag. She included Diana Moreno, her cottage supervisor, standing in the doorway.

“She makes me really happy,” Alexia said. “Because she can communicate with me and sign with me.”

Alexia is from Caldwell and goes home Thursday afternoons and comes back on Sundays.

Alexia said the workshops have revealed to her the creative possibilities all around her.

“Before, I just had random ideas,” Alexia said. “But I think I know this, and I will make more art like this.”

Idaho State Police have identified the people found dead in a Bellevue coffee shop on Thursday.

Twin Falls woman dies in I-84 crash near Bliss

Own a part of Twin Falls' history. Prasai's Thai Cuisine is for sale

All operating equipment and furniture is included in the sale.

Thanks to projects like Jackpot Solar, Idaho Power plans to leave its Valmy coal plant in Nevada three years early and stop all its use of coal by 2030.

St. Luke's Magic Valley Medical Center said it will temporarily not admit children patients as the hospital deals with an increase in COVID-19 patients.

With the coronavirus spreading rampant through the Magic Valley and overwhelming hospitals, the South Central Public Health District during a Thursday press conference put six of the region’s eight counties in the “red” level, indicating critical risk.

A man shooting cans in his backyard prompted police to respond Thursday afternoon.

Lincoln County has first 2 COVID-19 deaths, including man in his 30s

Eight more Idahoans were added to the state’s COVID-19-related death toll on Tuesday, including two men in their 30s — one from Lincoln County and one from Bonneville County.

Ethyn Orbe, 12, works on his own drawing inspired by the work of Artist James Castle on Wednesday at the Idaho School for the Deaf and Blind in Gooding.

Natalie Benitez, 8, listens to a speech about Artist James Castle and his work Wednesday at the Idaho School for the Deaf and Blind in Gooding.

Natalie Benitez, left, shows Alexia Cooper her artwork Wednesday at the Idaho School for the Deaf and Blind in Gooding.

Ethyne Orbe's charcoal drawing inspired by the work of Artist James Castle sits on his desk Wednesday at the Idaho School for the Deaf and Blind in Gooding.

Artist Educator Troy Passey hands out archival paper and charcoal for students to use Wednesday, Nov. 9, 2016, at the Idaho School for the Deaf and Blind in Gooding.