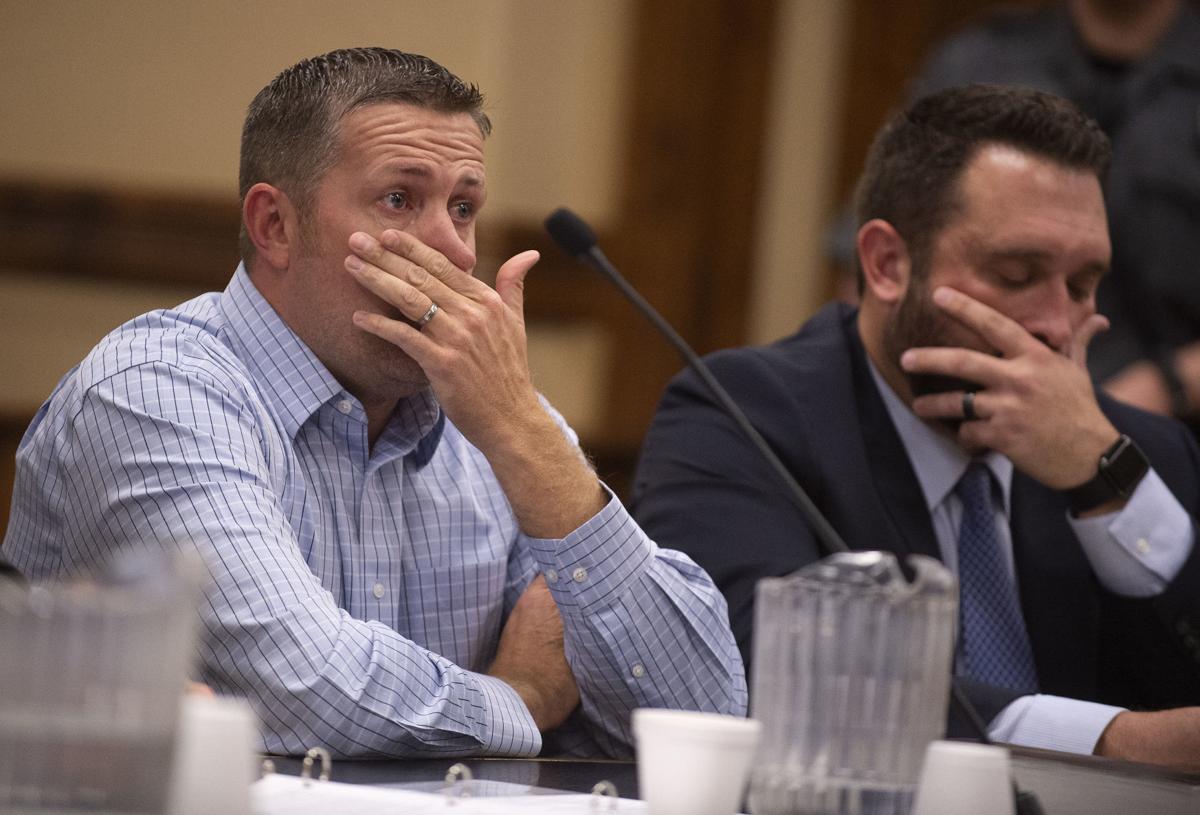 Todd Okelberry, left, wipes tears away while listening to his wife's statement during his sentencing hearing Tuesday, Oct. 29, 2019, at the Twin Falls County judicial building. 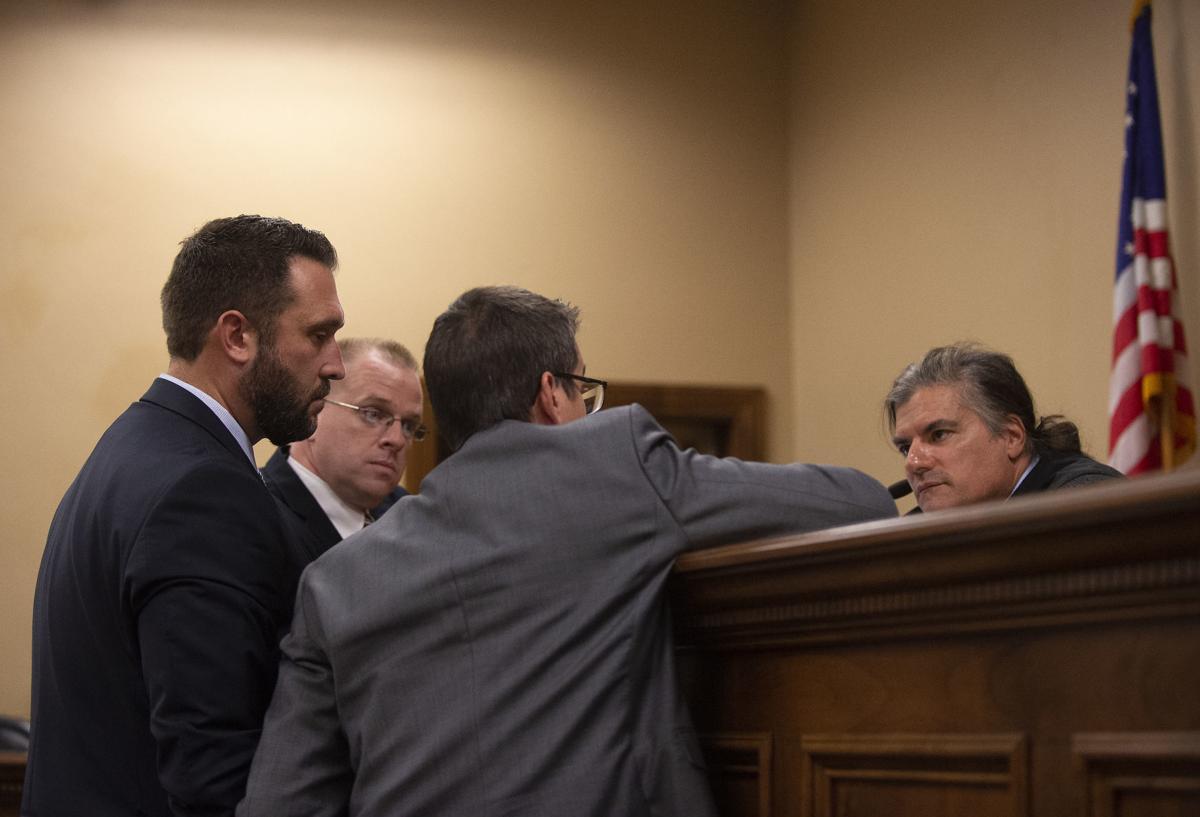 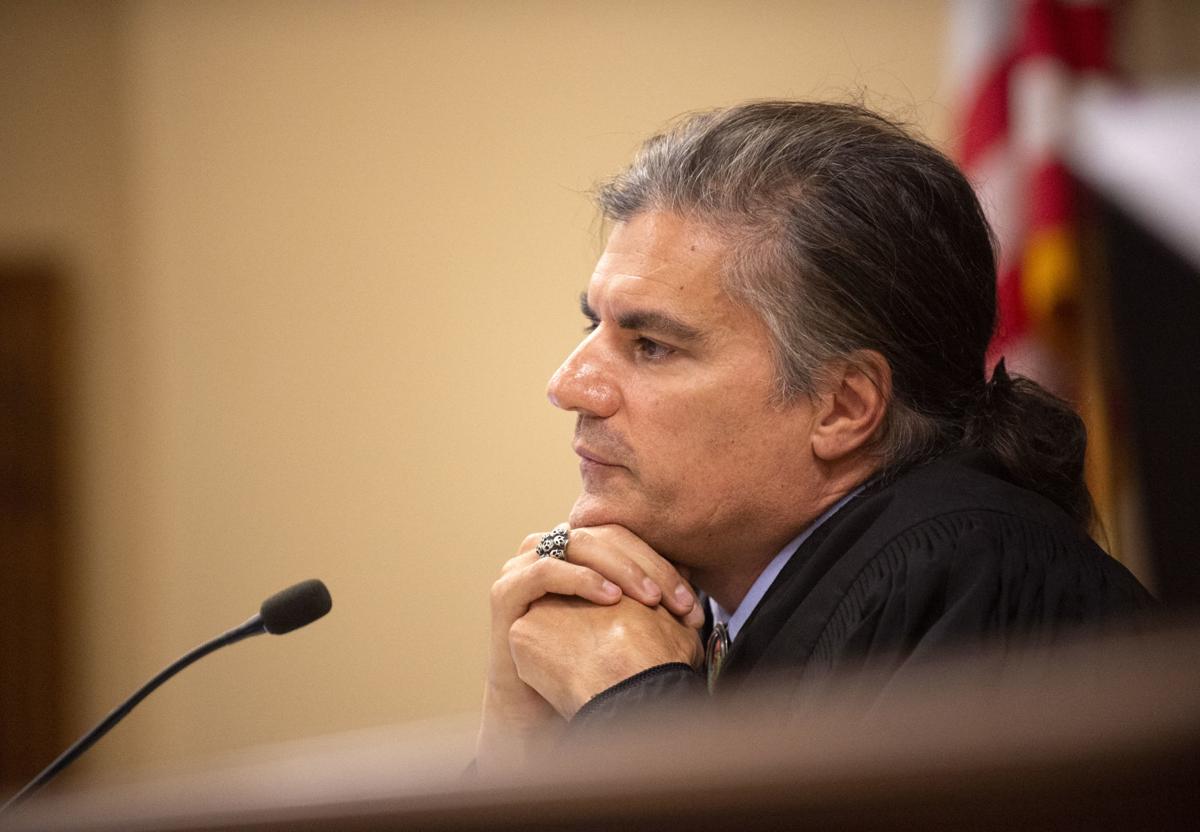 TWIN FALLS — A man who set fire to a romantic rival’s home will be spending time in prison.

Before an overflow crowd Tuesday in Twin Falls County Court, Todd Okelberry, 40, was sentenced to at least two years in prison.

In June, Okelberry pleaded guilty to felony first-degree in a plea agreement that included up to 10 years in prison.

Okelberry was charged after setting fire to the house in October 2017.

In his arguments, defense attorney Michael Danielson asked that his client be given probation, noting Okelberry accepted responsibility for the crime and has no previous criminal record.

“He is ashamed and prepared to accept punishment,” Danielson said.

Twin Falls Deputy Prosecutor Trevor Misseldine told Judge Eric Wildman that Okelberry’s crime was premeditated. Okelberry drove to the victim’s house, parked 150 feet down the street and walked to the house with a gas can before he poured the liquid around the house and lit it. Okelberry committed the deed because his wife was inside the home with another man.

Photos presented as evidence showed the damage done to the garage doors by the blaze.

“The court should not be in the business of endorsing vigilante justice,” Misseldine said.

Wildman agreed that a sentence of probation could convey that message.

Angela Okelberry wept and shook, pleading in her victim statement for her husband to be allowed to remain with his family and continue growing his business.

Wildman ordered prison time, noting that the defense had tried to shift the blame to the man whose house was burned. He described Okelberry’s behavior as reckless.

“This isn’t a probation case,” Wildman said. “It’s fortuitous [the fire] didn’t take down the house, take down the whole neighborhood.”

After remarking on Okelberry’s complete disregard for the lives and property of others, Wildman reminded Okelberry he had signed the plea agreement containing the 10-year prison term.

Wildman deviated, however, from that agreement, sentencing Okelberry to two to eight years in state prison, plus court costs and a fine of $3,000.

While members of the crowd burst into tears, Okelberry was taken into custody by Twin Falls County deputies and led from the courtroom.

City could consider endorsement of a statewide abortion ban

A pro-life advocate is changing directions and will now ask the city to endorse a statewide abortion ban.

Todd Okelberry, left, wipes tears away while listening to his wife's statement during his sentencing hearing Tuesday, Oct. 29, 2019, at the Twin Falls County judicial building.