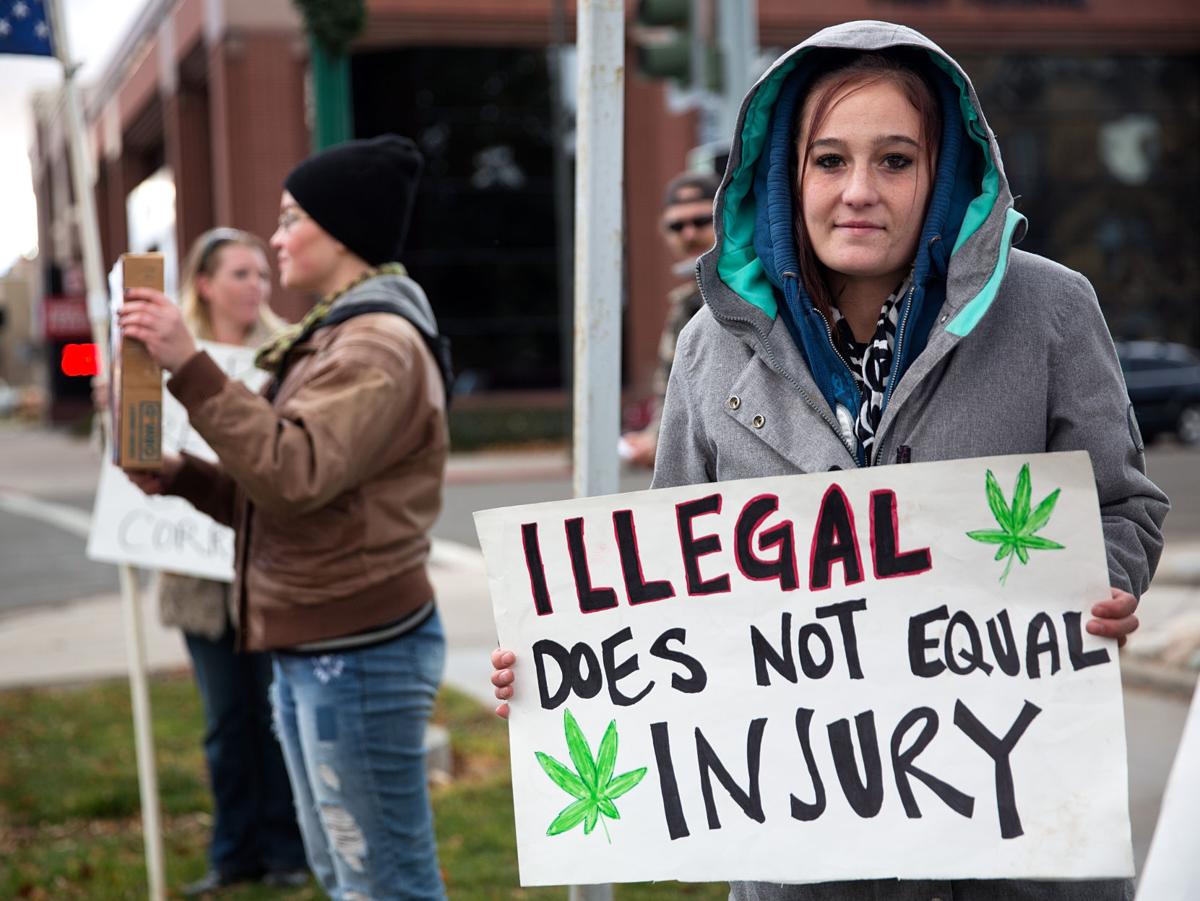 Kelsey Osborne stands with other protesters Nov. 29 at the Twin Falls County Courthouse after her initial appearance on a misdemeanor charge of injury to a child for giving her daughter a smoothie with marijuana butter. Osborne wants to see Idaho allow medical marijuana. 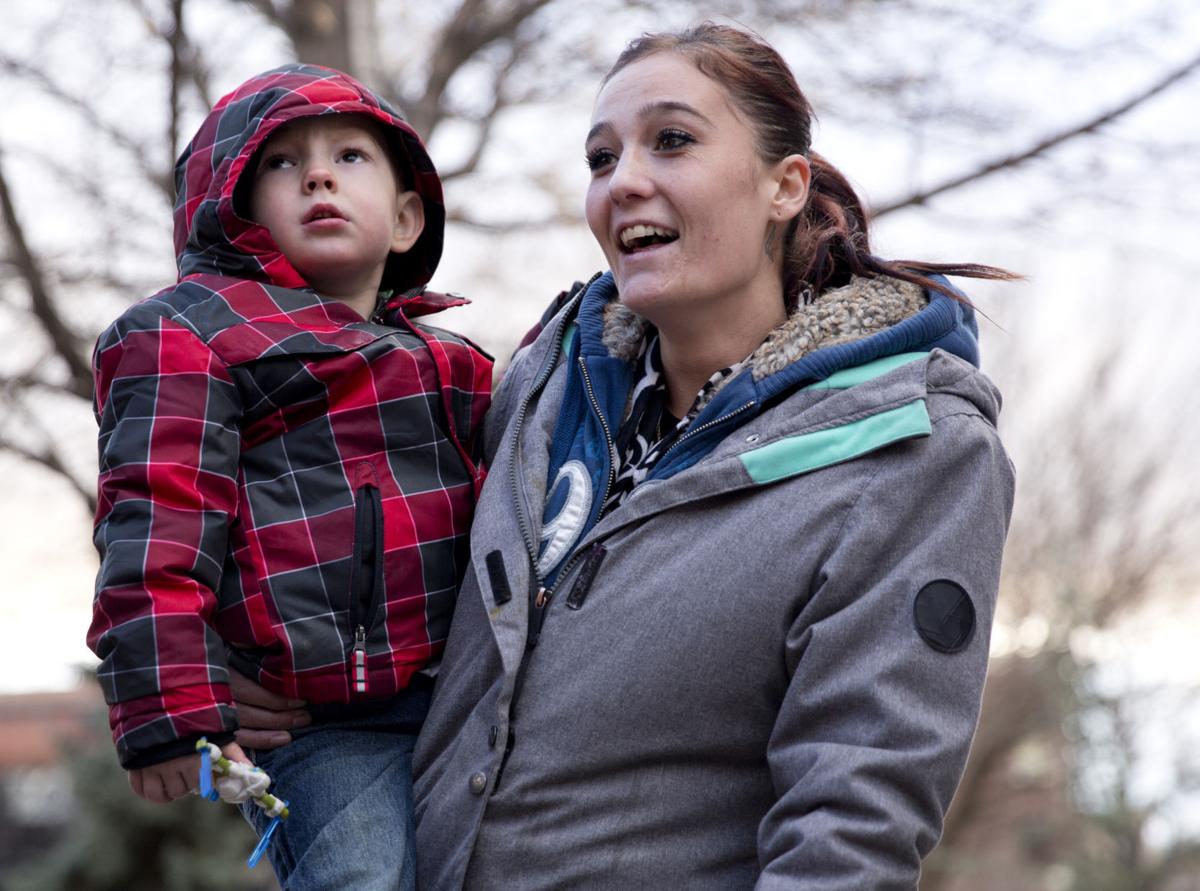 Kelsey Osborne talks to friends after her preliminary hearing Tuesday, Nov. 29, 2016, at the Twin Falls County Courthouse in Twin Falls.

JEROME — A Gooding mother who gave her daughter butter infused with marijuana to treat the girl’s seizure-like symptoms earlier this year was in court Thursday trying to regain custody of her children, but a judge ruled against her, her attorney said.

Kelsey Osborne, 23, is charged in Twin Falls County with a misdemeanor count of injury to child, while in Jerome County a legal battle is unfolding over the custody of her children.

Osborne says she gave her 3-year-old daughter, Madyson, a smoothie with marijuana butter on Oct. 5 to help calm the girl, who was suffering from seizure-like symptoms, vomiting and hallucinating. Osborne said Madyson’s behavior was the result of several weeks going on and off the antipsychotic medication Risperidone.

Osborne said the butter calmed the girl and helped treat the seizures and hallucinations, but when she took Madyson to a doctor later that day, the toddler tested positive for marijuana and the doctor reported it. The incident resulted in the criminal charge in Twin Falls County and prompted the Department of Health and Welfare to take Osborne’s two children, Madyson and son Ryker, and place them in the custody of her ex-husband.

On Thursday, following a nearly four-hour hearing that was closed to the public, a judge ruled that for now, Osborne still cannot have custody of her children, said her attorney, Tom Curl. The judge ordered that the children stay with Osborne’s ex-husband.

“This is not the absolute worst-case scenario,” Curl told the Times-News after the hearing. “She’s obviously upset, but I told her this was probably going to happen, so at least we were a little mentally prepared.”

But things could be worse, Curl said — the children could have been taken away from both parents. Instead, they’ll stay with their father and Osborne will continue to have supervised visitation rights.

“She’s upset, but she understands this isn’t going to be an overnight situation,” Curl said. “And the hearing lasted a little under four hours — we certainly didn’t go down without a fight.”

Curl said the adjudicatory hearing was held “to determine whether or not the state has the right to keep her kids from her.”

“The burden in today’s hearing was not beyond a reasonable doubt, it was the preponderance of the evidence — that’s not a very high burden,” the attorney said.

While Osborne’s criminal case in Twin Falls County is focused on whether she injured her daughter by giving her the marijuana-infused butter, the child protection hearing Thursday was centered on a negligence argument.

“The doctor said in his testimony there was no injury to Madyson,” Curl said. “The doctor said he doesn’t prescribe marijuana, obviously, because it’s illegal in Idaho, but it’s being studied for just this type of application. The (Child Protective Services) case worker agreed there was no injury. But the judge did find the state met their burden.”

The criminal trial in Twin Falls is set for Feb. 8, and Curl and Osborne plan to argue that while illegal, giving marijuana to Madyson didn’t hurt her.

“I don’t believe there’s any way possible I could have injured my daughter by doing anything I did,” Osborne said after a November hearing in which she pleaded not guilty. “If anything, I helped her.”

Did you miss any of the crime and court news from December? Here's a collection of the crime reports, notable arrests and important court hear…

Kelsey Osborne stood with protestors after her preliminary hearing Tuesday at the Twin Falls County Courthouse.

When it comes to treating sick kids, Idaho lawmakers have some of the most hypocritical and regressive attitudes in the country, and it’s kill…

Gov. C.L. “Butch” Otter said Friday that he has not changed his position on legalizing wider use of cannabidiol oil.

Japanese tycoon blasts off to space

Japanese tycoon blasts off to space

Kelsey Osborne stands with other protesters Nov. 29 at the Twin Falls County Courthouse after her initial appearance on a misdemeanor charge of injury to a child for giving her daughter a smoothie with marijuana butter. Osborne wants to see Idaho allow medical marijuana.

Kelsey Osborne talks to friends after her preliminary hearing Tuesday, Nov. 29, 2016, at the Twin Falls County Courthouse in Twin Falls.