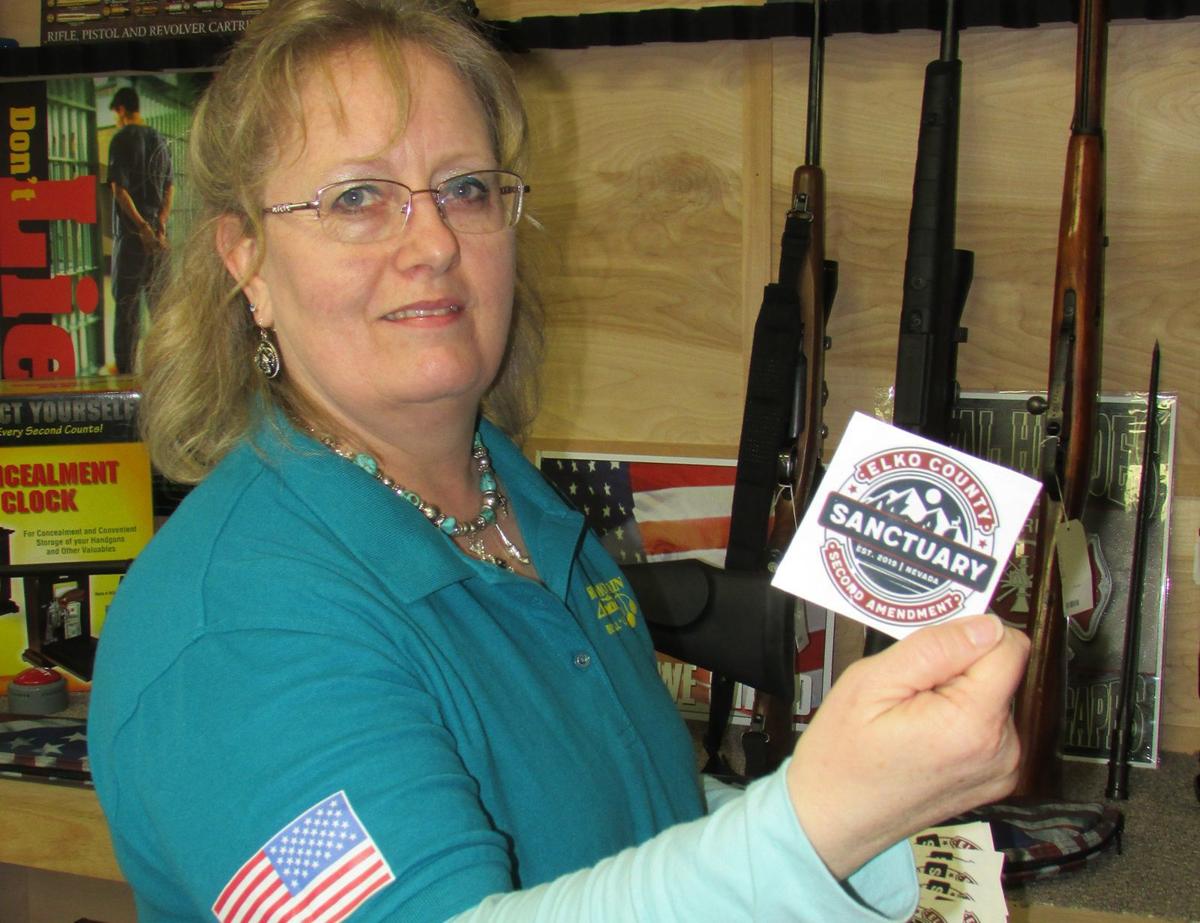 Jeni-Lei Powell holds a Second Amendment Sanctuary sticker in front of the gun display at her Ruby Mountain Pawn shop. The sticker was designed by local artist Royal Orser. 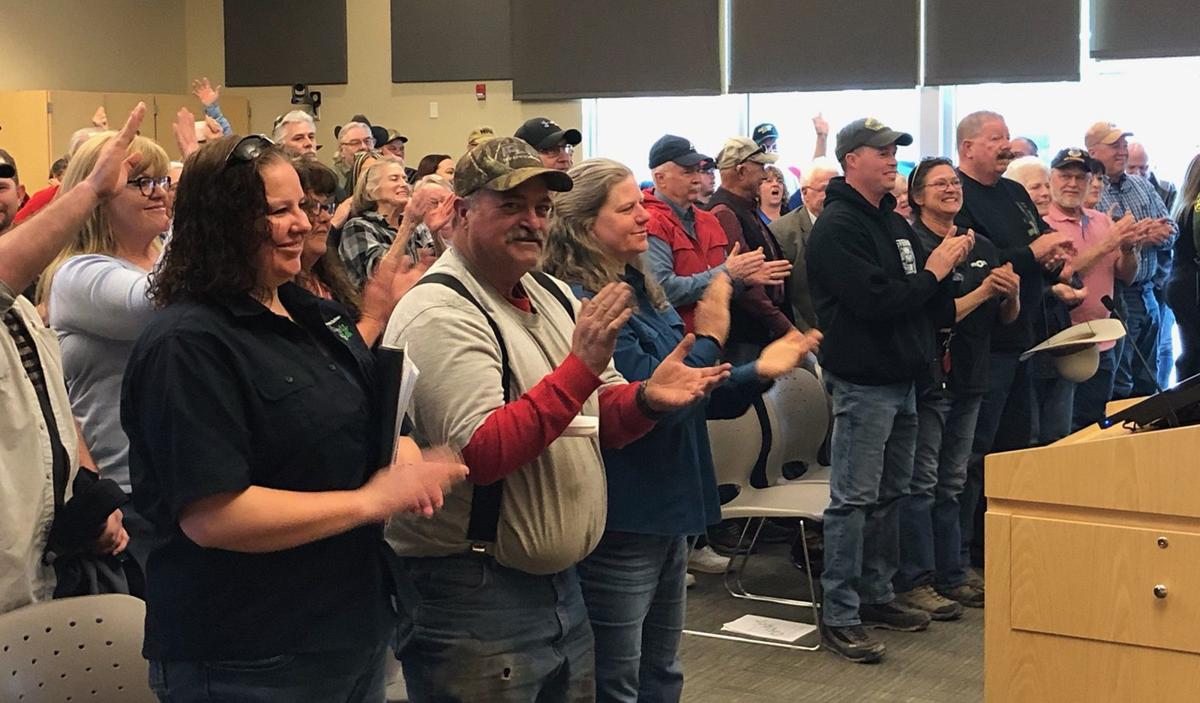 A standing room only crowd smiles and applauds after Elko County Commissioners voted unanimously March 20 to declare the county a Second Amendment Sanctuary. 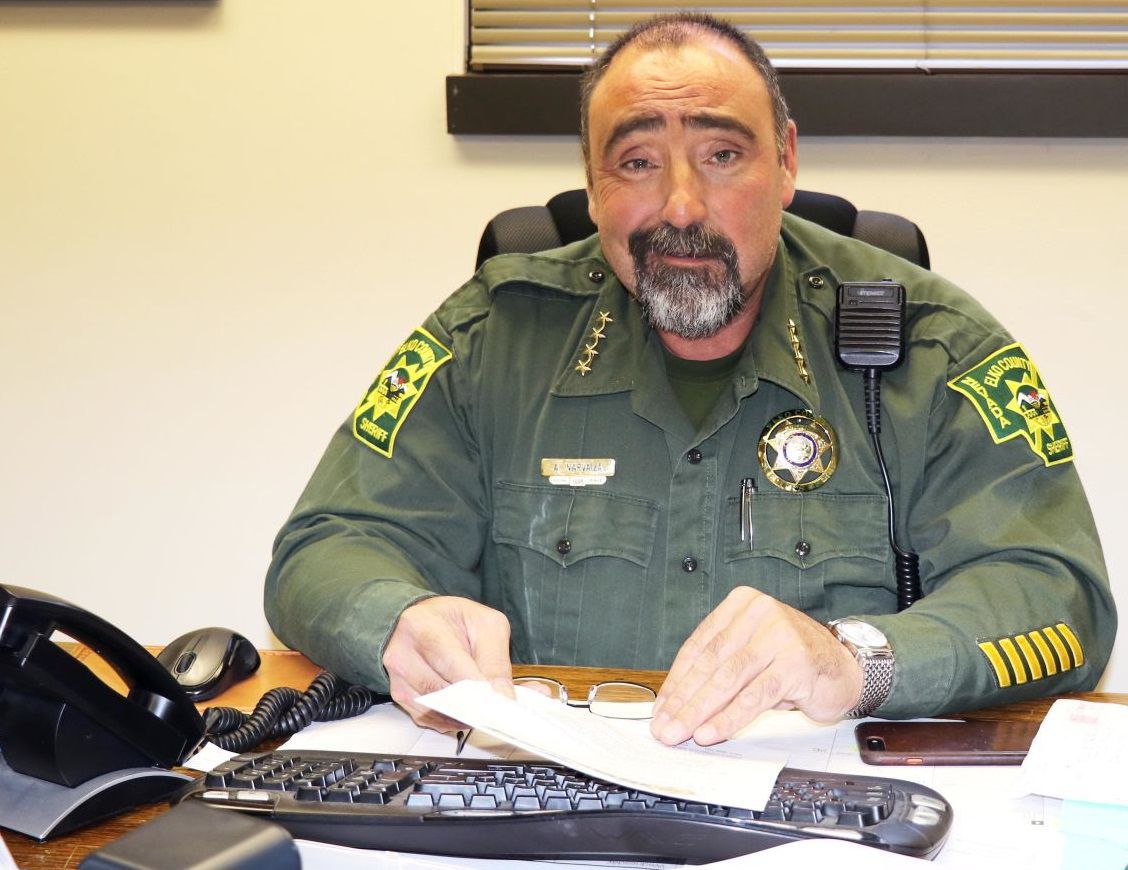 Jeni-Lei Powell holds a Second Amendment Sanctuary sticker in front of the gun display at her Ruby Mountain Pawn shop. The sticker was designed by local artist Royal Orser.

A standing room only crowd smiles and applauds after Elko County Commissioners voted unanimously March 20 to declare the county a Second Amendment Sanctuary.

ELKO, Nev. — A new red flag law is set to go into effect Jan. 1 in Nevada, but opponents, including Elko County officials, say the law is unconstitutional and shouldn’t be followed.

The law allows judges to order that a person’s guns be taken away if the person is deemed to be threatening to themselves or others.

Red flag laws, also known as Extreme Risk Protection Orders, have been passed into law in 18 states, including Nevada.

“For us to get your guns, there has to be due process,” Elko County Sheriff Aitor Narvaiza said Monday.

He said with the new red flag law, one person can go to the courthouse and fill out a statement about another person, and based on that statement a judge can issue an order that the other person’s guns must be taken away.

“It’s the only law on the books where you can lose your firearms without doing anything wrong, just based on an allegation,” Narvaiza said. “That to me is very unconstitutional.”

Narvaiza said he and Elko Police Chief Ty Trouten were meeting this week with Elko County District Attorney Tyler Ingram and others to discuss the red flag law and their response to it.

On March 20, Elko County commissioners approved a resolution declaring Elko County a Second Amendment sanctuary county. The resolution says in part: “this Board affirms its support of the duly elected Elko County Sheriff in the exercise of his sound discretion to not enforce any unconstitutional firearms laws against any citizen; and be it further resolved that this Board will not authorize or appropriate any funds or resources for the purpose of enforcing law that infringes on the constitutional right to keep and bear arms.”

The March 20 commissioner meeting was an emotional event with a full house of about 200 people expressing their support for Second Amendment rights.

The county’s Second Amendment sanctuary resolution was passed in response to Senate Bill 143, which has requirements for gun background checks. SB143 was signed by Gov. Steve Sisolak on Feb. 15.

At the March 20 Elko County commission meeting, Commissioner Cliff Eklund said that additional gun laws were being considered by the Nevada Assembly, including a red flag law. Assembly Bill 291, which includes the red flag provision, was signed by Sisolak on June 14.

Along with the red flag law, AB291 includes a ban on bump stocks and requirements for the safe storage of guns to keep them away from children, and it drops the allowable blood-alcohol level for possessing a firearm to 0.08.

“This is going to go a long way towards keeping our community safer,” Sisolak said during the signing of AB291. “It’s reasonable.”

Sheriff Narvaiza said Monday that he had not heard of the lawsuit yet, but he would look into it.

Allen has been the subject of recall drive in Humboldt County because he has not made a statement saying he would refuse to enforce some of the gun laws that were passed by the Nevada Legislature this year. The Dec. 20 press release from the Humboldt County Sheriff’s Office said Allen believes joining the NevadansCAN lawsuit against the red flag law is the appropriate way to fight the state’s new gun laws.

“Sheriff Allen believes this is the legal and ethical route to challenge this law and for lawmakers to hear the voice of our community,” the press release said. “If it is successful, this lawsuit will have legal authority to stop AB291 and the potential negative impact it posed to lawful gun owners. Since the passage of this law, Sheriff Allen has organized meetings with other Nevada sheriffs, met with the governor and Nevada attorney general, spoken with numerous attorneys from around the United States, and has taken other steps to address SB291 through the appropriate governmental procedure. Due to the outcome of these meetings, Sheriff Allen feels joining this lawsuit will set the example for community leaders to take a legal and ethical approach to opposing this law, as well as future legislation that may challenge the rights of our community.”

A press release from NevadansCAN explained some of the reasons the organization believes red flag laws are unconstitutional:

“The Red Flag provision violates both the Constitution of the United States and the Nevada State Constitution by giving judges the power to take away an individual’s right to keep and bear arms based on the accusation that the individual is dangerous and should not have a firearm,” said Julie Chen Hereford, co-plaintiff in the suit. The suit contends that a Nevada Supreme Court decision issued in September 2019 invalidates the red flag provision in the new law.

“The Supreme Court held in Andersen v. Eighth Judicial District Court that if an individual is charged with the offense of ‘misdemeanor of battery constituting domestic violence, the right to a jury trial is triggered, meaning that a decision to bar gun ownership is for a jury to decide and the ‘say so’ of a single judge is not sufficient to deprive citizens who do not have criminal histories of the right to possess guns. The ‘Red Flag’ provision of AB 291 allows for a secret process in which a judge can issue orders of gun seizure from individuals who have not been accused or convicted of violating any laws. The new law provides that upon the filing of a petition claiming a person is a danger to himself or others, a judge alone can order that person’s firearms be confiscated. There is no role for a jury, contrary to the ruling in Andersen.

Co-plaintiff Mary Rooney stated: “A person accused of being a danger may not even be aware of the court action against him, and his guns can be forcibly taken by law enforcement and his premises searched. Due process never enters into it.’

“Red flag laws are unconstitutional, and we will not stand for this government power grab in Nevada,” Hereford said. “NevadansCAN will work to defend our rights as citizens to the fullest extent of the law.”

A crash on Kimberly Road sent the juvenile driver of one of the vehicles to the hospital, police said.

“It’s the only law on the books where you can lose your firearms without doing anything wrong, just based on an allegation,” Narvaiza said. “That to me is very unconstitutional.”

The sheriff nailed it here. In other words, don't deny me due process.

The 2nd Amend is a RESTRICTIVE amendment. It states such in the Preamble to Bill of Rights. the 2A does not grant nor convey any right, but RESTRICTS and PROHIBITS the government from infringing upon this enumerated, pre-existing, God given right.

Our rights, written BEFORE the Constitution, are unalienable and are endowed from our CREATOR – not our legislators, not our government and certainly not from the United Nations and their attempt at gaining control.

All Federal and State Gun Control Is Unlawful