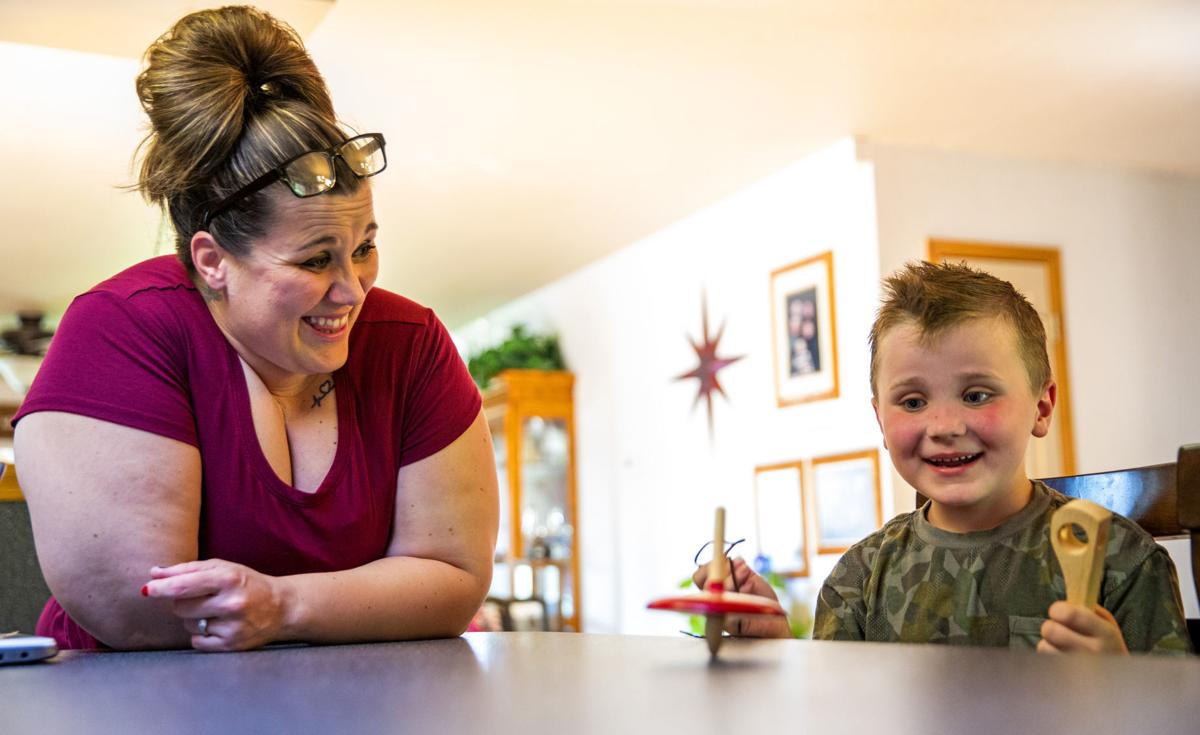 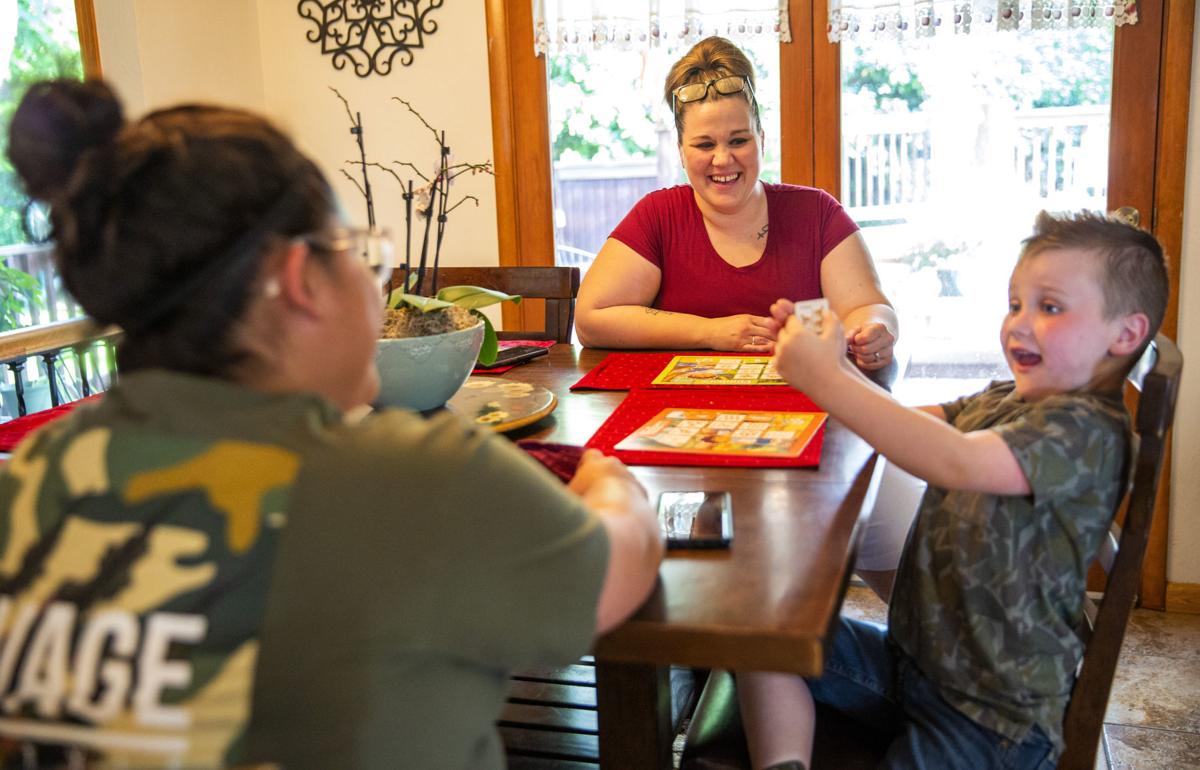 Michele Dubina plays a board game with her son Bentley Tilson, 5, and her fiancé Kayla Gutierrez on Friday at her fiancé's parents house in Twin Falls. Dubina graduated from drug court in April. 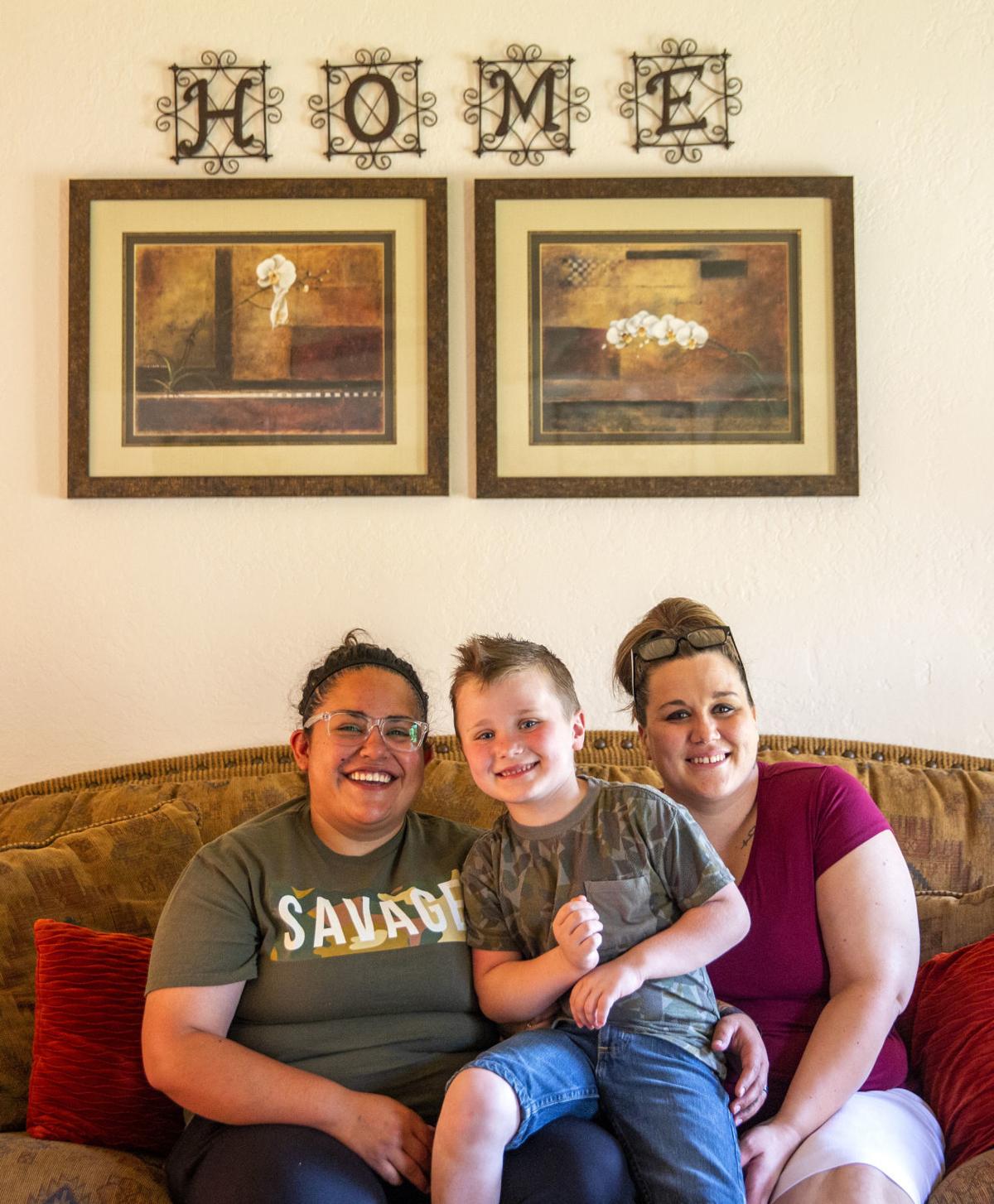 TWIN FALLS — Life for Michele Dubina these days is, by her own account, “super, super good.”

A lot has happened to the Twin Falls resident in recent months: She proposed to her girlfriend, began working a new job, started the process of buying a car, and earned a scholarship to go to college in the fall.

But perhaps her most notable accomplishment of the year has been graduating from the Drug Court program in Twin Falls County in April — and staying clean since then.

The goal of Drug Court, one of several specialty courts offered in the Fifth Judicial District, is to help addicts convicted of felonies achieve lasting recovery through educational programs, counseling and therapy.

The program is notoriously difficult to complete: Just more than half of all participants graduate, according to Israel Enriquez, Drug Court Coordinator for the Fifth Judicial District. Forty-eight percent of Drug Court enrollees across the state don’t finish the program, which lasts 12 to 18 months.

Even then, the challenges don’t end once the remaining 52 percent of participants walk across the stage. Graduates remain under supervision as they carry out the remainder of their probation sentences. But the lack of daily programming makes staying on track that much harder.

“We think, when we’re in drug court, ‘Oh my god, this is the hardest program, this is so hard,’” Dubina said. “Really, the lesson is the day you graduate. That’s when the real lesson starts.”

Roughly 15 percent of Drug Court graduates reoffend within the first year after they complete the program, according to data compiled by District Judge John Butler. That doesn’t necessarily mean they commit another felony or even a drug-related offense; re-offending can mean anything from a probation violation to a misdemeanor to a felony charge.

Oftentimes, when people who have finished the program end up violating probation or committing another offense, it’s because they fall back into contact with friends or family members with criminal or drug habits, according to Enriquez.

“Somebody who ends up graduating Drug Court and falling back in their old ways, for a majority of them it starts with their associations and goes from there,” Enriquez said.

To avoid this scenario, participants in the program identify people in their lives who may be negative influences. Dubina, who previously worked as a cashier at a gas station next to a bar, changed careers to lower the risk of bumping into old friends with substance abuse issues. Now, she works as a housekeeper at a hotel.

“I’ve done my best to distance myself from any ‘friends,’ anybody from my past who was using or drinking, and I just don’t want to put myself in that position,” she explained. “I felt it would be best if I found different work.”

But cutting off ties with close friends and family members, a move that in some cases requires participants to create an entirely new social world for themselves, is often easier said than done.

Dubina counts herself as lucky to have a strong circle of family and friends, some of whom have had similar recovery experiences and can offer enhanced guidance and support.

A social network can play an important role in making sure a recovering addict doesn’t fall back into old patterns, Enriquez noted. For those who are forced to break contact with loved ones for the sake of staying sober, peer support groups can function as a new kind of family.

“Just to be able to vent or bounce ideas off one another or look for guidance or support, that’s something that we definitely try to enforce,” Enriquez said. “People need people, really, for healthy support.”

That isn’t to say that the months since graduation have been easy for Dubina.

“Of course it’s crossed my mind a million times...’Sure, I can get away with it,’” she said. “But everything they’ve taught us is, hey, I’m not supposed to be thinking like this. Just because somebody’s not watching doesn’t mean I want to go back to that lifestyle.”

At the graduation ceremony in April, Dubina and her fellow graduates walked proudly across the stage. One by one, they delivered messages of hope and gratitude to their family, friends, and counselors, and spoke of future plans and aspirations.

Already, some of those dreams have been put on hold: One graduate was arrested mere weeks after completing the program.

Meanwhile, Dubina is one step closer to reaching one of her goals. In the fall, she will enroll at the College of Southern Idaho to begin another long, challenging journey: becoming a counselor to work with women who have gone through sexual or domestic abuse. She also wants to work with people struggling with addiction.

It’s an exciting — but slightly nerve-wracking — step for Dubina.

“It’s been a minute since I was in school, so I’m definitely not as sharp as I once was,” she said. “I’m interested to see how that’s going to go. But I’m determined to push through it and reach a goal that I’ve had for a very, very long time.”

Dubina sees her own experience with addiction as a valuable tool in her future counseling career. Working with some counselors who had gone through something similar, she said, was a highlight of the Drug Court program.

“It kind of gave us hope that life does get better,” she said. “No matter what you’ve done with your life, you can accomplish great things.”

TWIN FALLS — Cheers and hollers filled the auditorium as the graduates walked, one by one, across the stage to deliver their speeches.

TWIN FALLS — Recovery in Motion, a local recovery center, will receive a $15,000 donation from Optum Idaho in collaboration with the Idaho Ass…

Michele Dubina plays a board game with her son Bentley Tilson, 5, and her fiancé Kayla Gutierrez on Friday at her fiancé's parents house in Twin Falls. Dubina graduated from drug court in April.