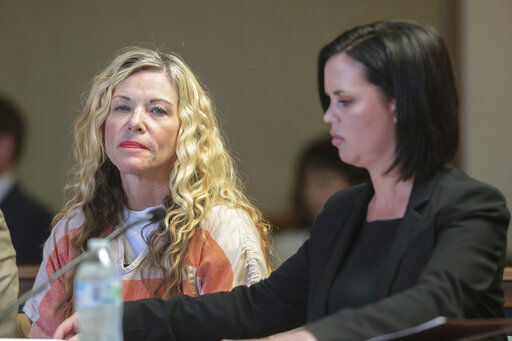 In this March 6, 2020, file photo, Lori Vallow Daybell, left, glances at the camera during her hearing, in Rexburg. 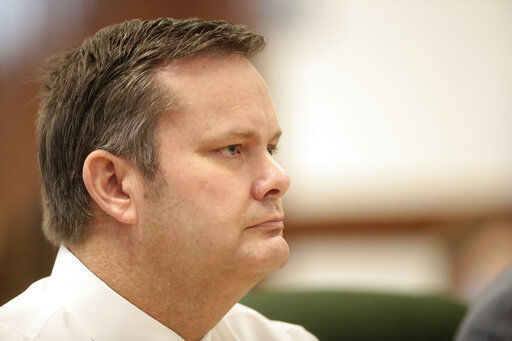 In this Aug. 4, 2020, file photo, Chad Daybell listens during his preliminary hearing in St. Anthony.

ST. ANTHONY (AP) — A woman charged with conspiring with her new husband to kill her two children has been committed to a mental health facility for treatment, and her husband has pleaded not guilty to the crimes.

The couple is at the center of a grim saga involving bizarre doomsday beliefs and a months-long search for two missing children who were later found buried in an eastern Idaho yard. Lori Vallow Daybell and Chad Daybell were each indicted by a grand jury last month on charges of conspiracy, murder and grand theft in connection with the deaths of Lori Daybell’s two youngest children, 7-year-old Joshua “JJ” Vallow and 17-year-old Tylee Ryan.

Chad Daybell was also charged with one count of murder and insurance fraud in connection with the death of his late wife, Tammy Daybell, just weeks before his marriage to the co-defendant.

Chad Daybell pleaded not guilty to all those charges, plus charges related to the destruction or concealment of the children’s bodies.

JJ Vallow’s grandmother, Kay Woodcock, attended the hearing, which was on the one-year anniversary of when the children’s bodies were found in Chad Daybell’s backyard. She said Chad Daybell’s plea was a lie.

“I think he should just give it up,” she told EastIdahoNews.com after the hearing. “How do you have two kids in your backyard and you don’t know anything about it? He’s a liar.”

The judge signed an order Tuesday afternoon ordering Lori Vallow Daybell to be committed to a mental health care facility for treatment for up to three months, in hopes of making her competent to stand trial. Idaho state law doesn’t allow for an insanity defense to criminal charges. But after a psychological assessment, the court found Lori Vallow Daybell wasn’t able to assist in her own defense or make informed decisions about her mental health treatment.

In the indictment, the Daybells are accused of espousing strange religious beliefs to encourage or justify the killings.

The complex case began in 2018, according to the indictment, when Chad and Lori Daybell — both still married to other people — began espousing their apocalyptical system of religious belief. Lori Daybell’s then-husband, Charles Vallow, eventually decided to seek a divorce. He wrote in court documents that his wife believed she had become a god-like figure responsible for ushering in the end times.

The two were still married but estranged in the summer of 2019 when Lori Daybell’s brother Alex Cox shot Charles Vallow, in suburban Phoenix.

Cox asserted the shooting was in self-defense, and he was never charged. Cox later died of an apparent blood clot in his lung.

Shortly after Charles Vallow’s death, Lori Daybell — then still Lori Vallow — and her children moved to Idaho, where Chad Daybell lived. He ran a small publishing company, releasing doomsday-focused fiction books loosely based on the theology of The Church of Jesus Christ of Latter-day Saints. He also recorded podcasts about preparing for the apocalypse, and friends said he claimed to be able to receive visions from “beyond the veil.”

At the time, Chad Daybell was married to Tammy Daybell, a fit 49-year-old school librarian who helped him run the publishing company. She died in October of 2019. Her obituary said she died in her sleep of natural causes.

Authorities grew suspicious when Chad Daybell remarried just two weeks later, and they had Tammy Daybell’s body exhumed in Utah in December. The results of that autopsy have not been released.

Police began searching for Tylee and JJ in November after relatives raised concerns.

Police say the Daybells lied to investigators about their whereabouts before quietly leaving Idaho. They were found in Hawaii months later, without the children. The children’s bodies were eventually found buried in a “pet cemetery” on Chad Daybell’s eastern Idaho property.

The woman offered a deputy $1,000 to stop so she could pee on the long ride from Jackpot to Elko.

TWIN FALLS — The Twin Falls Police Department is asking for the public's help in finding a missing 15-year-old girl.

Eighteen-year-old Angie Dodge was raped and killed in her Idaho home a quarter-century ago and an innocent man wrongly served 20 years in prison for the crime. On Tuesday, the man authorities have said is the real killer was sentenced to life in prison.

He took a girl’s life in Boise stabbing rampage. He’ll spend the rest of his in prison

Nearly three years after he stabbed nine people and killed 3-year-old Ruya Kadir, Timmy Kinner Jr. was sentenced to life in prison without the possibility of parole, as a judge handed down two consecutive life sentences for murder and aggravated battery.

Idaho's federal judiciary numbers have stayed the same since 1954, when there were just 600,000 residents, giving it a very high per-capita case load.

The investigation into the reported rape of a 15-year-old girl at gunpoint unearthed an alleged child sex trafficking ring run by a 17-year-old girl, who was living in an Idaho Falls group home at the time of the incident.

A Malta man charged with attempted murder after a birthday party stabbing is set to change his plea to a lesser charge.

In this March 6, 2020, file photo, Lori Vallow Daybell, left, glances at the camera during her hearing, in Rexburg.

In this Aug. 4, 2020, file photo, Chad Daybell listens during his preliminary hearing in St. Anthony.