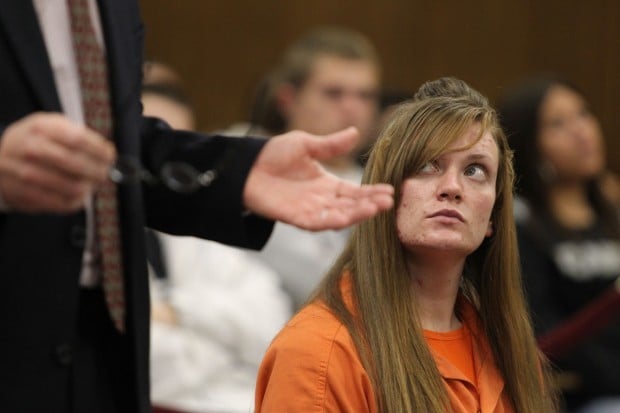 Convicted murderer Sarah Johnson listens to her attorney, Christopher Simms, in December 2010 in a Twin Falls courtroom during her hearing to have her 2005 conviction for murdering her parents overturned. 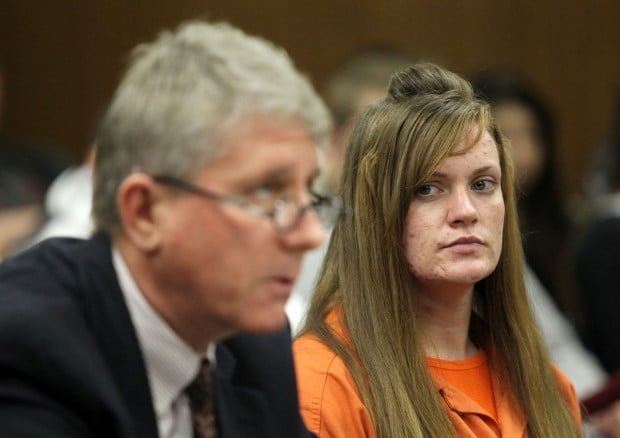 Sarah Johnson, right, sits next to her attorney in a request for a retrial. 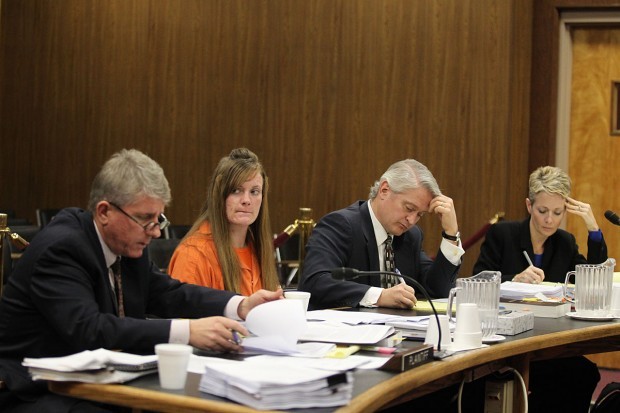 ASHLEY SMITH/Times-News Sarah Johnson listens to her attorney, Christopher Simms, left, Tuesday in a Twin Falls courtroom during her hearing to have her 2005 conviction for murdering her parents overturned. The hearing will continue today and is expected to wrap up on Friday.
By Alison Gene Smith

BOISE - The Idaho Supreme Court rejected the latest appeal by a Blaine County woman convicted in the double murder of her parents in 2003.

Sarah M. Johnson was convicted March 16, 2005, of first-degree murder for shooting Alan Johnson, 46, and his wife, Diane, 52. She is imprisoned at the Pocatello Women's Correctional Center.

Johnson was just 16 at the time of the slaying.

During that trial, prosecutors said Johnson shot and killed her parents after fighting with them over her relationship with an older man.

The Idaho Innocence Project has contended Johnson hasn't had competent counsel and that new DNA analytical techniques could prove she didn't kill her parents.

The Idaho Supreme Court upheld District Judge Richard Bevan's decision to dismiss Johnson's petition for post-conviction relief and to deny a motion for a new trial.

In its decision, issued Tuesday, the court says Johnson hasn't presented convincing evidence that her attorney was ineffective or that she might not have been convicted if it weren't for his mistakes.

The court also says the identification of previously unidentified fingerprints on the murder weapon doesn't entitle Johnson to a new trial.

The court agreed with Bevan, saying Johnson failed to show that the new evidence would have resulted in her acquittal.

"The jury was aware of the phantom prints, and they still convicted Johnson of both counts of first-degree murder; thus telling a new jury the name of the owner of those phantom prints will not likely produce an acquittal," Bevan wrote in his denial.

The court also noted that the man whose fingerprints were on the rifle was credible in denying he had anything to do with the murders.

The court's decision gave this background of the case:

Johnson was at home at the time of the shooting and consistently denied any involvement, but she gave several different accounts of what she was doing at the time of her parents' murders.

In a garbage can outside the house, police found a latex glove, a leather glove matching the one found in Johnson's bedroom and Johnson's pink robe covered in blood.

Testing showed that Johnson's DNA was present inside the latex glove.

The murder weapon belonged to a man who was renting a guesthouse on the family's property, but who was out of town during the murders.

Fingerprints on the rifle were unidentified at the time of the trial, and no print on it matched Johnson's.

The rifle's owner said the closet the gun was in was unlocked and a number of people could have had access to it.

After a five-week trial, a jury found Johnson guilty of first-degree murder in the deaths of both parents. She was sentenced to two life sentences plus 15 years for a firearm enhancement.

Johnson's first appeal was dismissed because her attorneys failed to file on time. Later, the district court found that Johnson's counsel was ineffective and allowed her to appeal again.

In her second appeal, Johnson brought up numerous allegations, including newly discovered evidence based on the identification of fingerprints on the murder weapon.

Christopher Hill, whose fingerprints were on the rifle, testified at a post-conviction evidentiary hearing that he helped the rifle's owner move into the guesthouse in 2002. He also said he'd shot the rifle in 2002 while caretaking at the man's ranch.

Johnson then appealed to the Idaho Supreme Court saying the district court was wrong in denying her claims.

The murder case against Sarah Johnson has spanned more than 10 years. Here are some of the important dates from the Times-News archives:

Sept. 2, 2003: Johnson's parents, Alan and Diane, are found shot to death in their Bellevue home.

Oct. 29, 2003: Johnson is charged with two counts of first-degree murder and an enhancement for use of a deadly weapon.

July 5, 2008: More appeals are pending in the case; one blames the attorneys who represented Johnson for mishandling the trial.

April 9, 2009: Johnson's lawyer asks for new judge for their appeal.

May 3, 2012: Johnson again seeks a retrial with the help of the Idaho Innocence Project and Boise attorney Dennis Benjamin. The group says Johnson previously had ineffective counsel.

June 11, 2012: Bevan orders new counsel in the case while Johnson attempts to get a new trial.

Feb. 18, 2014: The Idaho Supreme Court affirms Bevan's decision to deny a motion for a new trial.

Download the free Times-News app for iPhone or Android to get the latest news at your fingertips now: Magicvalley.com/apps/

US to spend $2.1B to improve infection control

US to spend $2.1B to improve infection control

KETCHUM (AP) | A woman convicted of killing her parents has had her request for an acquittal or new trial denied.

Sarah Johnson attorneys claim to have witness to evidence tampering

Convicted murderer Sarah Johnson listens to her attorney, Christopher Simms, in December 2010 in a Twin Falls courtroom during her hearing to have her 2005 conviction for murdering her parents overturned.

Sarah Johnson, right, sits next to her attorney in a request for a retrial.

ASHLEY SMITH/Times-News Sarah Johnson listens to her attorney, Christopher Simms, left, Tuesday in a Twin Falls courtroom during her hearing to have her 2005 conviction for murdering her parents overturned. The hearing will continue today and is expected to wrap up on Friday.
© Copyright 2021 Times-News, 132 Fairfield ST W Twin Falls, ID | Terms of Use | Privacy Policy
Powered by BLOX Content Management System from TownNews.com.
You don't have any notifications.