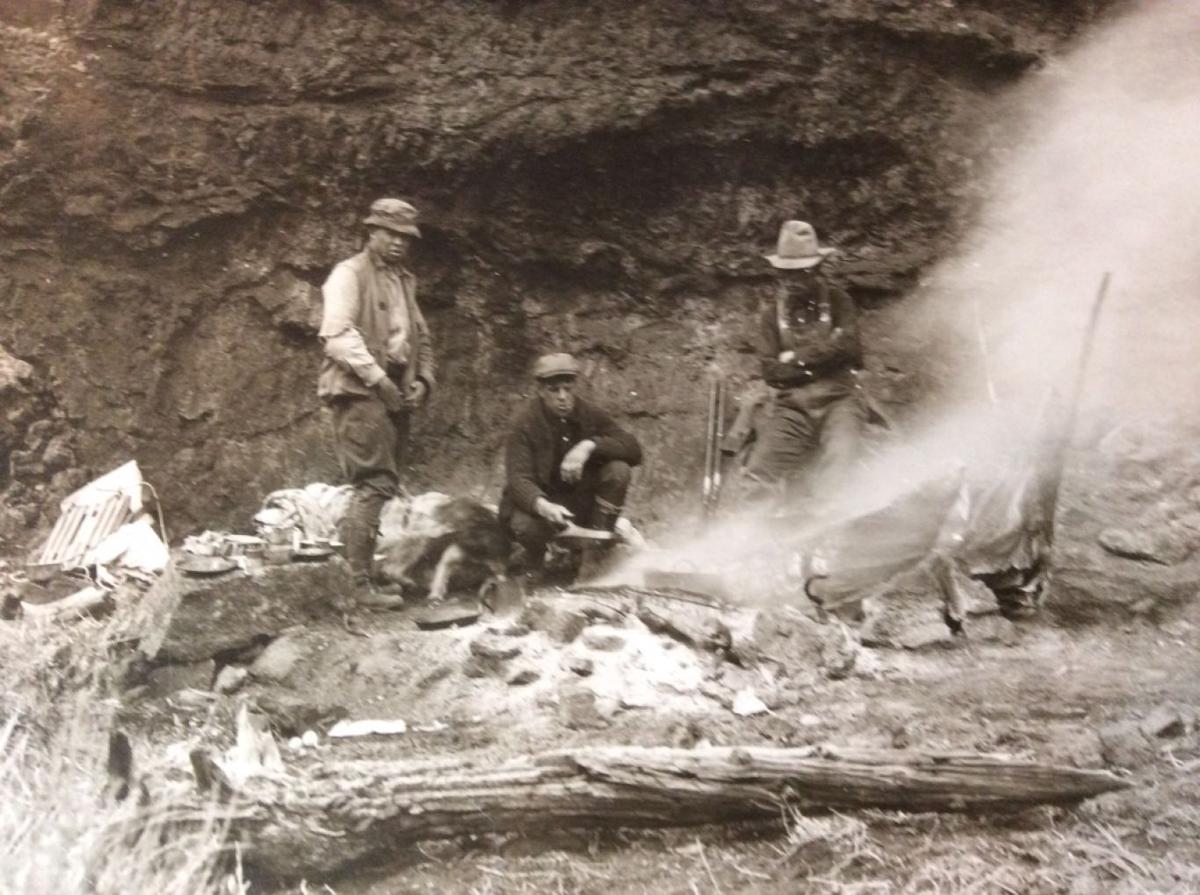 Robert Limbert, left, Walter Cole and an unidentified man camp on one of Limbert’s and Cole’s trips through what became Craters of the Moon National Monument. 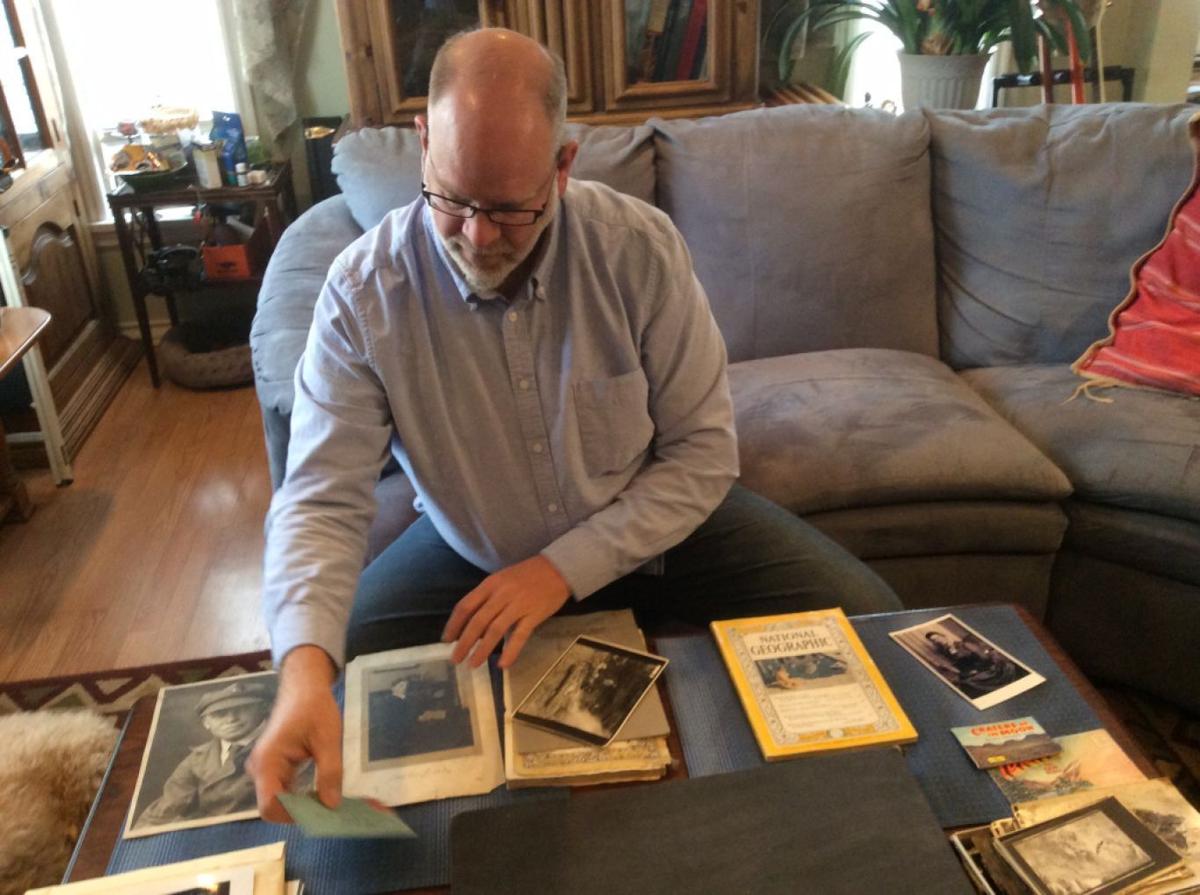 Ken Cole, of Boise, has a collection of photos and other memorabilia from his grandfather Walter Cole and explorer Robert Limbert. 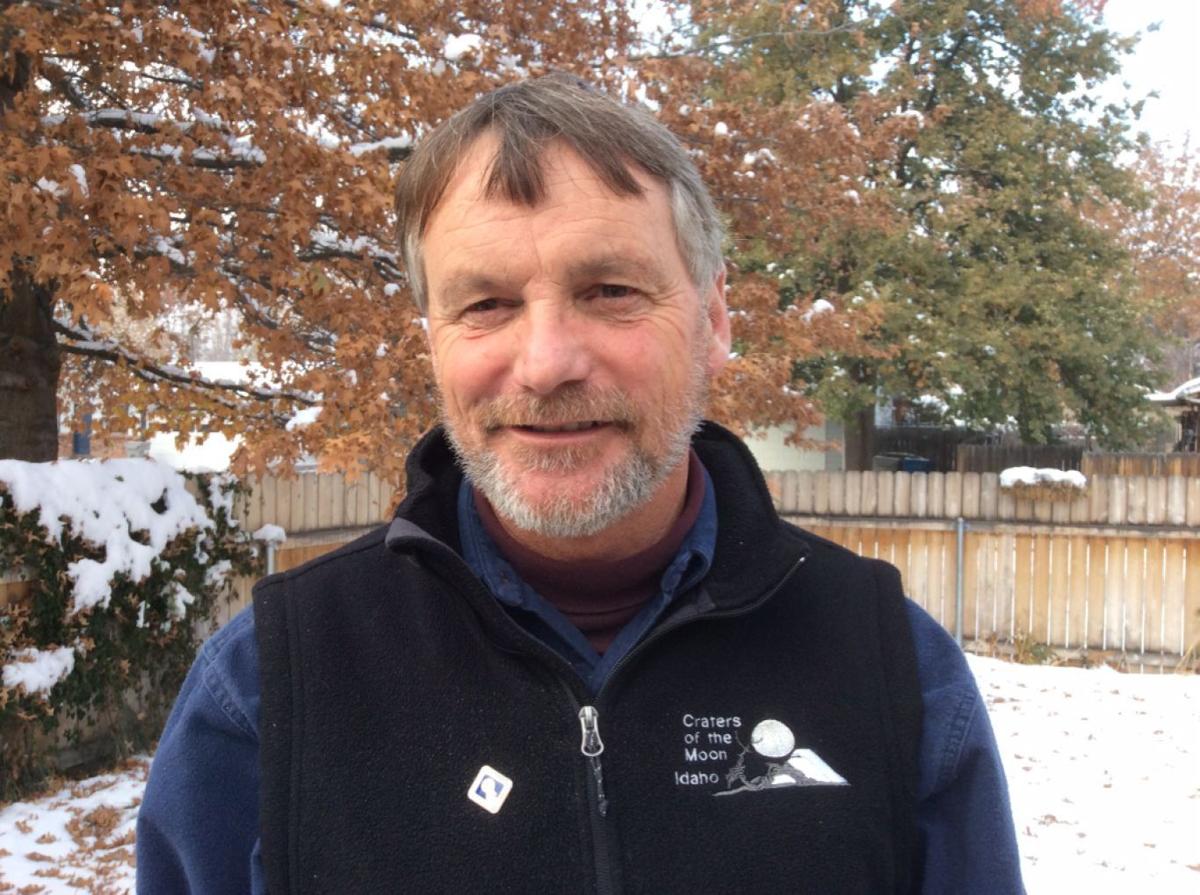 ARCO • Idaho is the only state in the West that doesn’t have a national park solely within its borders.

That could change if a proposal to convert Craters of the Moon gets legs.

The idea has been around a while; then-U.S. Rep. Richard Stallings introduced a bill in the 1980s to elevate the monument to a park and expand it.

In 2000, President Bill Clinton did expand it — from 54,000 to 753,000 acres. Congress shored up the addition and ensured areas outside the original monument boundaries would be open to hunting. But it stayed a national monument.

Buckley wouldn’t use the move to ask for a bigger budget, though parks usually get more money for programs and preservation than monuments do.

The 700,000 acres in the expansion are under control of the Bureau of Land Management and would remain so. Access to grazing and hunting would stay the same.

What would change is the visibility. South Idaho tourism officials say making Craters a national park would attract more visitors not only to Craters, but also to other Idaho destinations.

Many tourists, especially well-heeled foreign travelers, plan trips around visiting national parks. When they look at a map of Idaho, though, they don’t see one, though they do on maps of Montana, Wyoming, Utah and Oregon.

Many national park guidebooks don’t even list Craters, which is 15 miles from Arco, and many forget that a slim western edge of Yellowstone National Park lies in Idaho.

“I think it will get people here to stay longer and enjoy the many other things what we have to offer,” said Debbie Dane, executive director of Southern Idaho Tourism, based in Twin Falls.

The monument’s volcanic lava flows from eruptions that occurred in the past 10,000 years cover hundreds of square miles of south-central Idaho, giving it the appearance of a lunar landscape. Apollo astronauts trained there in the 1960s; even today, NASA is conducting research for future missions to planets in our solar system.

“To me, Craters is of park quality,” said John Freemuth, a Boise State University public policy professor and a former National Park Service ranger. “Its unique geology alone ranks it with other national parks.”

On May 2, 1924, Calvin Coolidge proclaimed Craters of the Moon a national monument using the Antiquities Act of 1906. It came after a campaign that began in the pages of the Idaho Statesman by Robert Limbert, a taxidermist, guide, trick-shooter and roper.

His three-page story and photo spread about his 1920 expedition, published in the Idaho Sunday Statesman April 10, 1921, was followed by a June expedition sponsored by the Statesman. That led to the “Among the Craters of the Moon” article in National Geographic in 1924, which convinced Coolidge to set the area aside.

“This area contains many curious and unusual phenomena of great educational value and has a weird and scenic landscape peculiar to itself,” Coolidge said.

The Statesman called for making Craters a national park in an editorial Sunday, continuing a tradition that included support for President Clinton’s 2000 expansion.

“It is appropriate as we continue celebrating our 150th year of publishing at the Idaho Statesman to finish the job that former Publisher Calvin Cobb and writer Robert Limbert started in our pages more than 90 years ago,” said Statesman Publisher Mike Jung. “Just as they championed Craters of the Moon then, so do we now.”

Capitalizing on the asset

Craters averages about 200,000 visits a year, but this year Buckley expects 210,000. The National Park Service is changing its fees, so admission for one car will cost $15 for one week, good for all park units, Buckley said. Currently, Craters charges $8 to visit only Craters.

It gets to keep all of its receipts — up to $500,000 and 80 percent after that — to reinvest into the property. Buckley plans to use the money to improve visitor access, such as creating a mountain bike trail and eventually more access to features to the south near Interstate 84, such as the Kings Bowl lava field that has ice caves to explore but is now hard to reach.

The change would boost economic development, said Chad Cheyney, of the University of Idaho Extension Service in Arco and the Butte County Chamber of Commerce board.

“For some reason, we haven’t been able to capitalize on the monument as much as we should,” Cheyney said. “Raising the status of it could potentially help.”

A Personal Stake in Craters of the Moon

ARCO | For Ken Cole, Robert Limbert’s 1920 expedition to what he called the “Valley of the Moon” has personal significance.

Robert Limbert, left, Walter Cole and an unidentified man camp on one of Limbert’s and Cole’s trips through what became Craters of the Moon National Monument.

Ken Cole, of Boise, has a collection of photos and other memorabilia from his grandfather Walter Cole and explorer Robert Limbert.