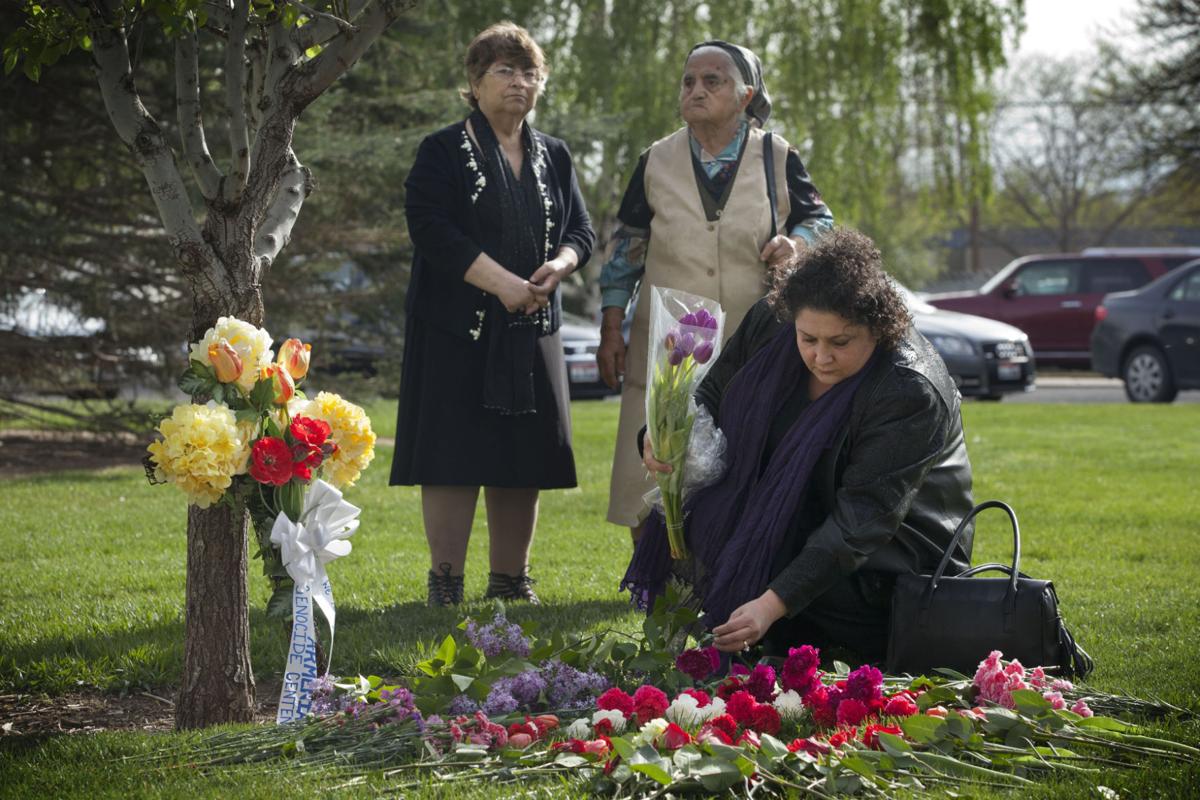 Alla Bagramyan lays flowers at a memorial for the Armenian genocide of 1915 on Friday at Twin Falls City Park. Bagramyan fled persecution in Baku, Azerbaijan in 1993 and settled in Twin Falls. 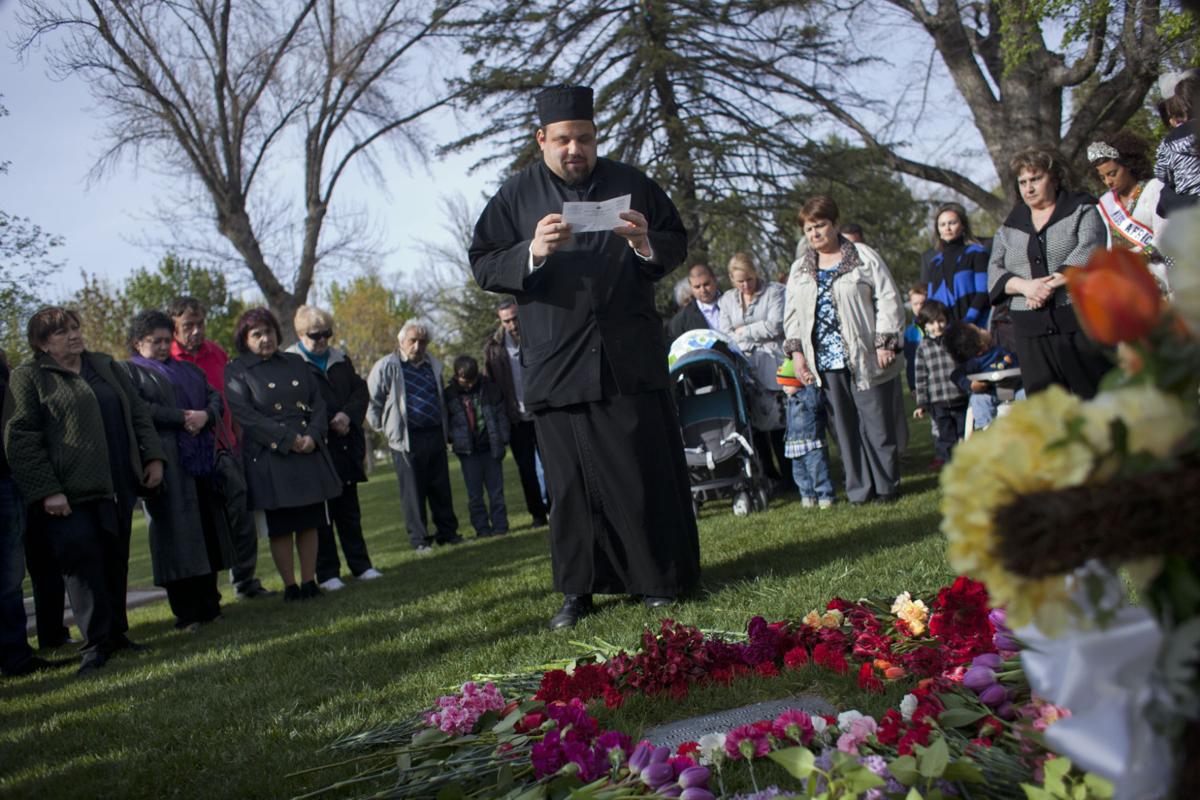 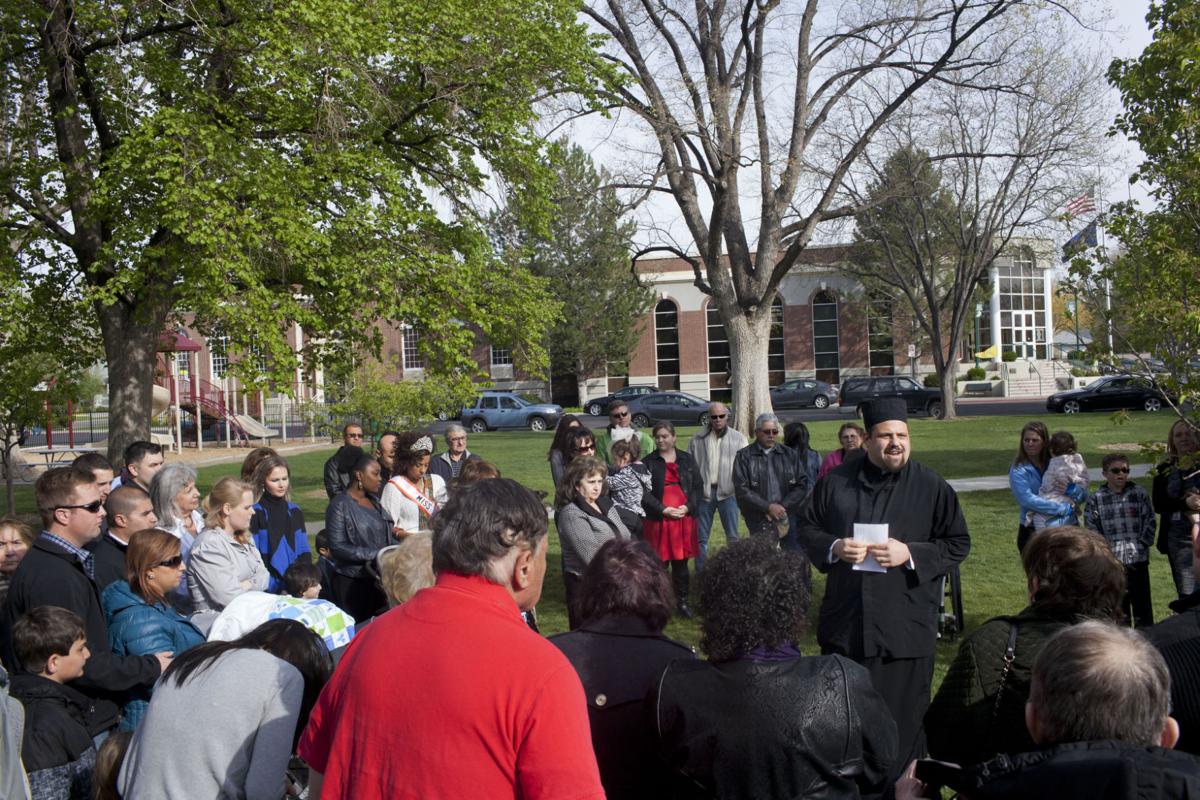 TWIN FALLS • Giana DeBie was 5 years old when her family was driven from their home in Azerbaijan to Armenia in 1988.

Though she was young at the time, DeBie said “I knew something was going on.”

DeBie was 8 when her family came to the U.S. in 1992. Her family joined other Armenian refugees and immigrants who resettled in Twin Falls.

From 1988 to 1990, the Armenian population in Soviet Azerbaijan were beaten, tortured, murdered and expelled from the city.

On Friday evening, she stood near a plaque at Twin Falls City Park. The plaque was surrounded by red and white roses and carnations. More than 50 community members gathered around the plaque on the 100th anniversary of the Armenian genocide that occurred in present-day Turkey.

The plaque has been at the park since 2009. In 2004, Idaho became the 33rd U.S. state to recognize the massacre of 1.5 million Armenians as a genocide, when Gov. Dirk Kempthorne, proclaimed April 24 as Idaho Day of Remembrance of the Armenian Genocide of 1915-1923.

“Armenian-Americans living in Twin Falls, Idaho, have greatly enriched our city and state through their contributions as citizens, business leaders, agriculture, academia, government and the arts,” the proclamation says.

Around the world on Friday, people of Armenian descent commemorated the genocide 100 years ago of Armenians by Ottoman Turks. The annual commemoration on April 24 marks the day when the mass killings started.

Turkey denies the deaths constituted genocide. The anniversary also comes after President Barack Obama, for the seventh year in a row, stopped short of calling the 1915 killings a genocide. On Thursday, Obama called the massacre the “first mass atrocity of the 20th century.”

Tens of thousands of people marched in Los Angeles Friday to commemorate the anniversary of the killings, the Associated Press reported. Many joined a six-mile walk from the Little Armenia neighborhood to the Turkish Consulate, carrying flags and signs, the AP reported.

“We commemorate with deep respect the Ottoman Armenians who lost their lives during the relocation in 1915, and we share in the grief of their children and grandchildren,” the Los Angeles office of the Consulate General of Turkey said in a statement Thursday. “But we are against exploiting history and the sufferings for political purposes. ... The term ‘genocide’ is a legally binding, morally obstructing, historically wrong and politically misused concept that prevents the discussion of the events.”

“The history is a big part of my past,” DeBie said. “I know I won’t be living in another 100 years, but we will continue remembering until the day we pass.”

DeBie noted the increase attendance at Friday’s gathering at the park, which was followed by a memorial service and Armenian dinner at St. Ignatius Orthodox Church in Twin Falls.

This year, Liyah Babayan, an organizer of Friday’s event, invited refugees from other countries who have experienced genocide.

“Genocide is the very last degree of human darkness,” Babayan said. “There is no human darkness, no spiritual sin, no more an evil than the extermination of your own species.”

Davina Hull, Miss Africa Idaho, planned to give a presentation at the church on the stages of genocide and the 1994 Rwandan genocide where as many as 800,000 people — mostly of the Tutsi minority — were murdered.

Babayan said this was the first time she has reached out to refugees including the Eritrean and Bosnian communities in Twin Falls.

“This is not just our memorial,” Babayan said. “We share that one painful abuse against us. It’s something we find in common.”

BOISE • A resolution praising Azerbaijan for its “ancient traditions of interfaith tolerance, inclusion and positive multiculturalism” is dead…

TWIN FALLS • There will be a ceremony in Twin Falls City Park at 2 p.m. commemorating the Armenian genocide.

More than 50 community members gathered Friday to pay tribute to the 100th anniversary of the Armenian Genocide of 1915-1923 at Twin Falls City Park.

Alla Bagramyan lays flowers at a memorial for the Armenian genocide of 1915 on Friday at Twin Falls City Park. Bagramyan fled persecution in Baku, Azerbaijan in 1993 and settled in Twin Falls.