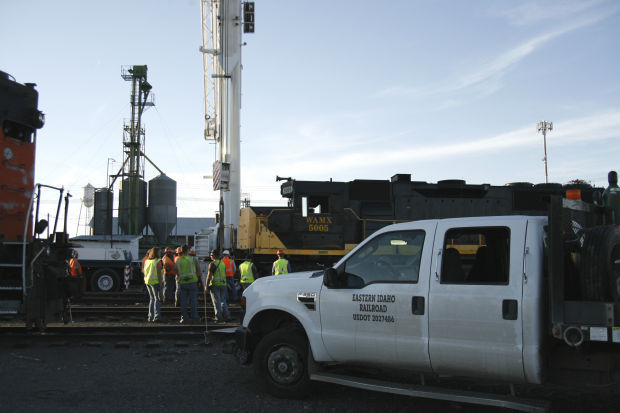 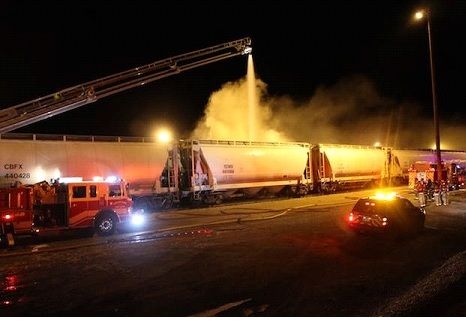 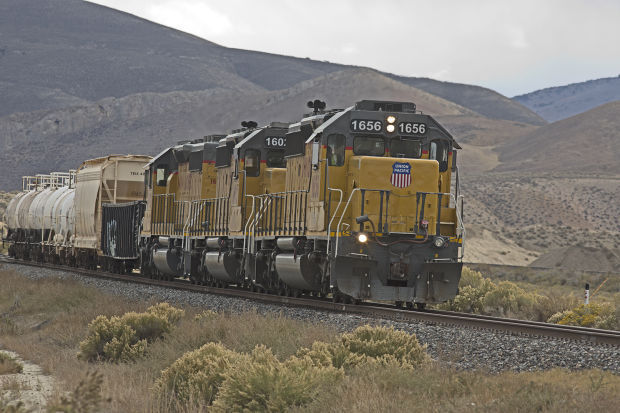 LEWISTON • Lewiston has no oil trains passing through or pipelines crisscrossing it like the ones that have been at the center of dangerous spills nationwide of late.

But there are hazardous materials that come and go on a daily basis and each one possesses a level of threat to Lewiston-Clarkston Valley residents if something were to go horribly wrong. Trains deliver tanker cars full of materials like chlorine, liquefied petroleum gas and anhydrous ammonia used in a number of industrial processes. Big trucks haul gasoline and diesel fuel and couriers handle low levels of radioactive medical products.

The deliveries of such materials or their use in manufacturing and other processes go largely unseen by most people. But there is an extensive legal and procedural infrastructure to deal with them and steps to make sure accidents either don’t happen, or first responders are equipped to deal with them if they do.

Federal laws and regulations govern their transportation, use and the disclosure of them to first responders and the public. Those charged with keeping people and the environment safe from hazardous materials say they have up-to-date information on the locations of hazardous materials and are well trained to respond to accidents and spills. That includes workers at places like Clearwater Paper in Lewiston and first responders such as Idaho’s Region II Hazardous Materials Response Team.

But the adherence to community right-to-know laws intended to keep people aware of the hazards present where they live, work and recreate appears to be less robust. Access to such information requires a level of doggedness from ordinary citizens and public officials are not always quick to release it.

Part of the reason appears to be related to a tension between security and the public’s right to know that has arisen in the wake of the war on terrorism. For example, Idaho won’t provide citizens with a list of facilities in their communities that use or create hazardous materials.

“We don’t give a blanket list,” said Elizabeth Duncan, a spokeswoman for the Idaho Bureau of Homeland Security.

It instead requires people to already know of their use and existence at specific facilities before it will provide vaguely detailed and partly redacted inventory reports that the 1986 Emergency Planning and Community Right to Know Act, or EPCRA, says the public can access.

Many other states do the same, according to a report by the Center for Effective Government released last month.

Only five out of the 50 states provided full hazardous chemical inventory reports when asked to do so by the group. Washington and Oregon were among the minority that provided full disclosure.

Idaho, like many other states, provides information only about specific facilities, a policy that makes it difficult for people to learn about local hazards.

“It’s a chicken-and-egg approach. You want to know about hazards in your community because you don’t know and you are asked to identify the hazards to get more information on them,” said Sean Moulton, director of open government at the Center for Effective Government at Washington, D.C. “It begs the question as to whether or not this is really a right-to-know program if you already have to know about these facilities.”

The organization recommends making chemical inventory reports available online, much like the Environmental Protection Agency does with annual reports of the release of toxic substances through the Toxic Release Inventory. Among the 50 states, only Illinois does so. Public access to both chemical inventory reports and information about the release of toxic substances are supposed to happen smoothly under the Emergency Planning and Community Right to Know Act. But according to the group, a technicality in the federal law makes the states and Local Emergency Planning Committees responsible for releasing such information to the public. That inherent decentralization creates a hodgepodge of approaches across the country and leaves some communities with less information than others.

In Idaho, the state Bureau of Homeland Security is the keeper of the documents. Because of that, Nez Perce County declined to release chemical inventory reports for facilities that are required to submit them. Duncan said the right to know act gives the state discretion over release of chemical documents and it won’t let the public see some documents.

For example, facilities that handle 140 extremely hazardous substances are required to compile and submit Risk Management Plans to the EPA that include worst-case spill or accident scenarios. Getting a look at these documents is difficult. The EPA holds the information but requires people to make appointments at Federal Reading Rooms, where they can only look at 10 such reports in one sitting. It doesn’t make copies and the nearest such reading room to Lewiston is in Seattle.

The state and local governments have access to risk management plans and use them to create emergency response plans designed to guide first responders when a spill occurs. But they don’t release them.

“Though the Emergency Planning and Community Right to Know Act states that emergency response plans shall be made available to the public, it also states that the act shall not preempt state law,” wrote Duncan in response to a request by the Tribune made under the state’s public records law for the documents.

“Disclosure of the Risk Management Plans you have requested fit within this exemption and will therefore not be provided,” she wrote.

The federal act mandates the creation of Local Emergency Planning Committees with a mission of preparing responses to releases as well as encouraging companies to lessen their use of hazardous materials. The report by the Center for Effective Government, citing an EPA audit, said the use of the committees varies across the country. Some are highly active, others meet infrequently.

That plays out in Nez Perce County. Prior to a reorganization meeting this month, the Local Emergency Planning Committee had not convened for a significant amount of time. Emergency planner Bryant Wolfe, just a few months into the position after the retirement of Mel Johnson, said he didn’t now the last time the committee had a regularly scheduled meeting prior to the meeting earlier this month.

Wolfe aims to change that. He has called for a renewal of Local Emergency Planning Committee efforts and monthly meetings. The group that is supposed to consist of representatives of state and local elected officials, law enforcement, firefighters, health and transportation workers, community groups, the news media, and owners or operators of industrial plants and other chemical users, met at the first of the month but no public notice was given and weeks later minutes had yet to be compiled.

The county’s emergency operations plan has not been renewed in some time. Again Wolfe, who is working to update it, did not know how long it had been but the copy he provided to the Tribune was dated 2007 and signed by several elected or appointed officials who are no longer in their posts. Wolfe initially declined to provide a copy of the plan but relented when a public documents request was filed with the Nez Perce County Commission.

Wolfe cited security concerns for his initial reluctance to provide copies of the plan. That is not uncommon thinking, even though the federal act that calls for the plans and the committees says they are to be public.

Jeff Rylee, hazardous materials program manager for the state Bureau of Homeland Security, said there was an attitude shift about public disclosure following the terrorist attacks of Sept. 11, 1991.

“Suddenly first responders are acutely aware there is a vulnerability in the community to someone who might want to cause mischief, so we started being a little more careful about information.”

The Center for Effective Government report, however, attempts to put security risks in context to the risk of ordinary spills and accidents.

“Some states have become highly resistant to calls to make chemical information public because of ‘terrorism threats.’ But the track record of incidents over the past 14 years has shown that ignorance of risks is a greater threat to communities and first responders than sabotage.”

HazMat Team is First Line of Defense for Rail Accidents