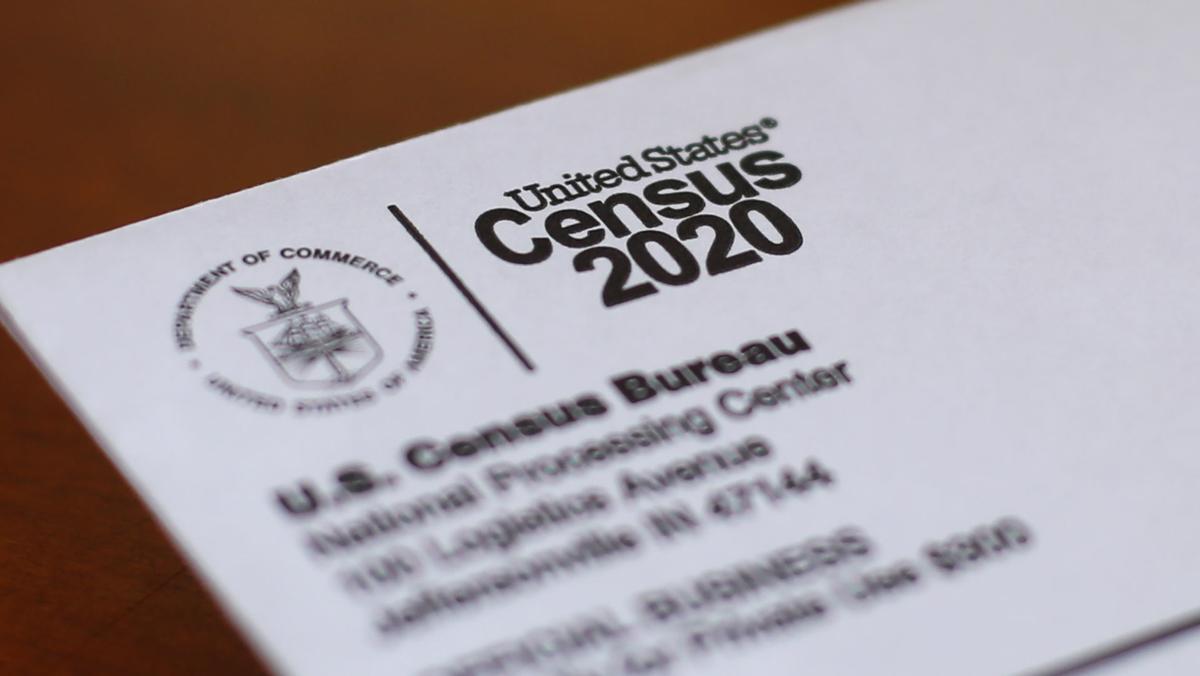 This photo from earlier in April shows an envelope containing a 2020 census letter mailed to a U.S. resident in Detroit. 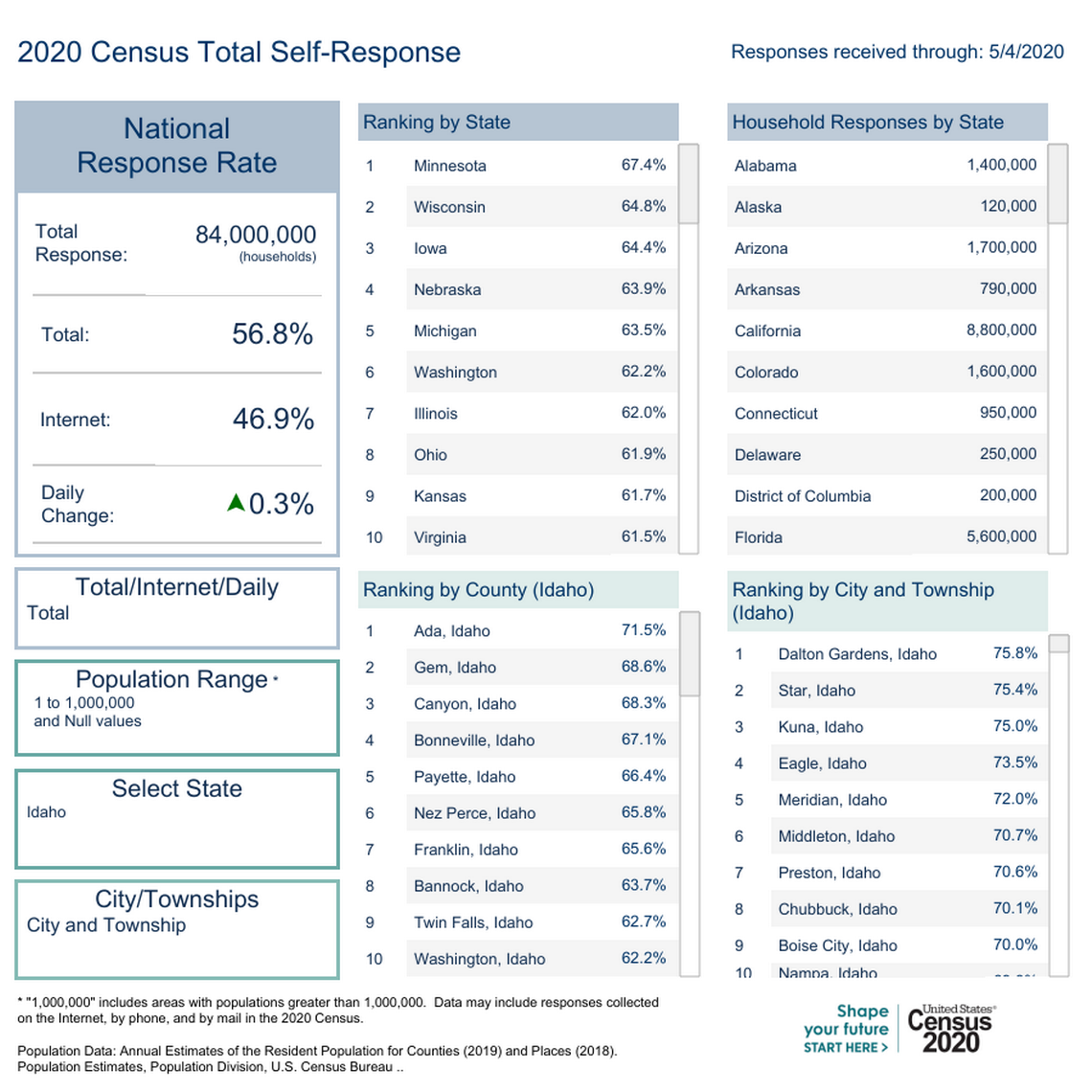 This chart shows the 2020 Census response rates in Idaho counties and cities as of Monday, May 4.

BOISE — Idaho’s decision to lift its stay-at-home order means the U.S. Census Bureau will resume operations in some rural Idaho counties starting May 6. Many households in rural Idaho haven’t even received a 2020 Census questionnaire because of coronavirus delays.

Idaho and Alaska are the first states in the Census Bureau’s Western region, based in Los Angeles, where the Census Bureau will re-deploy field staff since the coronavirus shutdowns. Census-takers are usually dispatched to personally deliver questionnaires to homes without mail service to individual housing units or unverifiable addresses, which includes about 4.5% of U.S. households.

But the Census Bureau suspended all field work March 18 because of coronavirus concerns — after just a few days of hand-delivering forms. Despite the constraints of the pandemic, 59.8% of Idaho households have answered the 2020 Census online, by phone or by mail.

Getting an accurate census count of every resident living in Idaho at the time of the 2020 Census is important. Census counts are used to determine congressional representation, Voting Rights Act enforcement, state legislative boundaries and Idaho’s allocation of $675 billion in federal funding.

Census counts were used to allocate $3.6 billion in federal funding to Idaho in 2016 — averaging out to about $2,200 for every Idaho resident. One of the fastest-growing states in the country for the past three, Idaho is also on the brink of qualifying for a third Congressional representative, depending on census counts.

Less than 20% of the populations of several rural Idaho counties have responded to the census as of Monday, May 4. Only 13.8% of Valley County, 10.8% of Clark County and 6.6% of Camus County have answered census questionnaires, according to the U.S. Census Bureau’s daily ranking of state response rates.

“It’s fair to say that the self-response rates are low because a high portion of those counties have not even received a questionnaire in the first place,” said Jeff Enos, the deputy director for the Western region of the U.S. Census Bureau.

Enos said many of the Idaho counties with low response are areas where census-takers have to drop-off paper questionnaires. A Census Bureau map shows that census-takers have to deliver questionnaires to residences in large swaths of Idaho because of unreliable mail service or unverifiable addresses. About 82% of households in Clark County, Enos said, do not receive census forms by mail.

Roughly 200 census-takers — the majority of whom live in the counties where they work — will be deployed to those hard-to-reach areas of Idaho, delivering census invitation and paper questionnaires to about 51,000 Idaho households. Enos said census staff have been trained in social-distancing requirements and will be wearing masks and gloves.

About 70% of Boise residents have responded to the census, while less than 5% of the cities of Smelterville, Bliss, Island Park, Stanley, Malta and St. Charles and others have responded. The Census Bureau has recorded no responses from the tiny town of White Bird in Idaho County, although more than 70% responded in 2010.

The 2020 Census will count every person living in the United States. Anyone can respond to the census online, by phone or by mail.

Three months later, the rumbling still hasn’t subsided as aftershocks continue to jar the area. But now scientists have a better idea of what may have led to the major earthquake — and it’s helping them uncover some other secrets buried under Idaho’s soil.

How many are hospitalized with COVID-19 in Idaho? Here’s what we know — and what we don’t

Leaders of Idaho’s largest hospital systems warned this week that more and more patients are arriving with COVID-19, and health care institutions fear an impending crisis.

2 arrested after stabbing in Murtaugh

Three men were sent to hospitals and two men were arrested after a stabbing in Murtaugh.

Sheriff: At least 8 killed in plane collision at Idaho lake

A Rupert man was injured in a crash Wednesday morning when he struck a utility pole.

This photo from earlier in April shows an envelope containing a 2020 census letter mailed to a U.S. resident in Detroit.

This chart shows the 2020 Census response rates in Idaho counties and cities as of Monday, May 4.