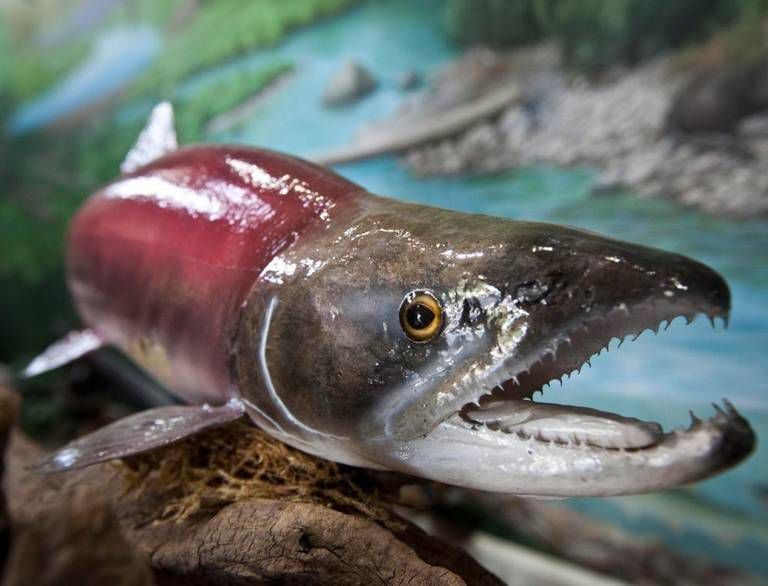 Lonesome Larry, the only sockeye salmon to return from the ocean to Idaho’s Redfish Lake in 1992, seen here on display at the MK Nature Center in Boise. 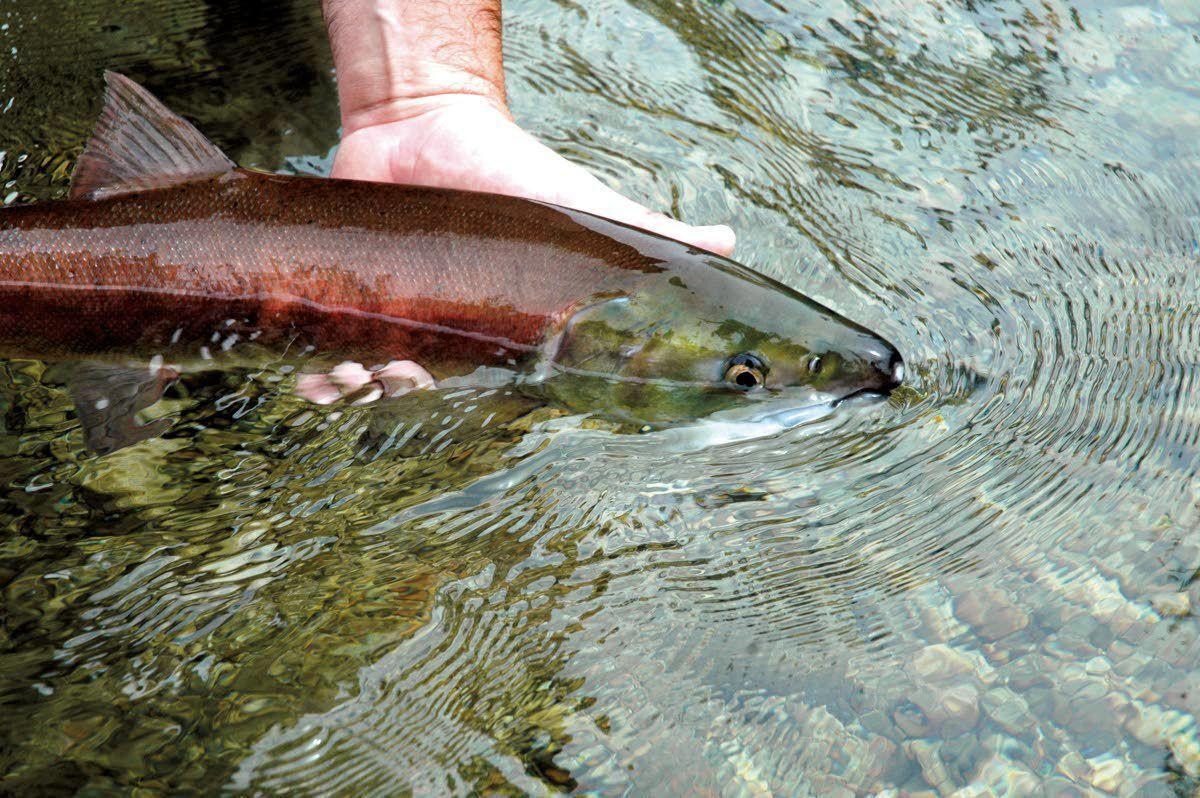 An adult Snake River sockeye is released in Redfish Lake in this 2010 picture.

SAWTOOTH NATIONAL FOREST — The return this month of nine endangered Snake River sockeye salmon that spawned in Pettit Lake in the Sawtooth Valley underscores the critical role the Shoshone-Bannock Tribes have played in lifting the fish from the brink of extinction.

The salmon, along with three Pettit Lake sockeye that returned in 2019, expands the genetic diversity of a species that once spawned in lakes throughout the Snake River Basin. Even though returns of the endangered Idaho salmon remain low, the Pettit Lake success is a bright spot in an otherwise dark story.

“It is important to remember that we are here today because the tribes refused to let this iconic fish go extinct,” said Ladd Edmo, a member of the Fort Hall Business Council.

So much of the story about sockeye has revolved around the Department of Fish and Game’s phenomenal captive breeding program and its most famous donor, Lonesome Larry. In 1992, he and 15 other sockeye that returned the year before, and in the next two years, were captured as they returned to Redfish Lake Creek. Their valuable genetic code of the southern-most sockeye population, which is able to travel more than 800 miles and climb to 6,500 feet above sea level, was collected and raised in the Eagle Fish Hatchery.

This team effort by federal, state and tribal biologists preserved the stock and prevented extinction by 2012. But none of the recovery program would have happened if the Sho-Bans had not petitioned the federal government in 1990 to list the sockeye under the federal Endangered Species Act.

Their petition came after decades of neglect by state and federal officials.

In the 1950s and 1960s, Fish and Game poisoned sockeye nursery areas near Stanley, in Hell Roaring, Yellowbelly and Pettit lakes and installed barriers to keep the still returning sockeye from using them again. The lakes remained toxic for as long as two years before they were stocked with rainbow and cutthroat trout that Fish and Game felt were of more interest to anglers.

Idaho’s Fish and Game Commission voted in 1975 to try to restore the sockeye run in the Sawtooth Valley. Fish and Game working with the National Marine Fisheries Service planted hundreds of thousands of Canadian sockeye fingerlings in Alturas and Stanley lakes from 1980 to 1983.

The program was a complete failure. The Fisheries Service regional chief wrote that Fish and Game was the problem.

“This program has obviously been given a fairly high public profile in Idaho,” he wrote. “But it does not seem to be getting the kind of support from the state fisheries agency that is necessary to make sure it has some reasonable chance to succeed.”

On April 2, 1990, the Sho-Bans filed the petition demanding action.

Even after the Sho-Bans had filed their petition, Fish and Game biologists poisoned Yellowbelly Lake in the summer of 1990. The poison flowed downstream into the Pettit Lake outlet stream, killing returning Chinook salmon.

Once Snake River sockeye were listed as endangered in 1991, the situation changed and Idaho joined the tribes and the federal agencies in a co-management arrangement. The Sho-Bans took the lead on restoring sockeye to Pettit and Alturas lakes.

In 1995, tribal biologists removed the barrier that kept sockeye from leaving and entering Pettit Lake, said Kurt Tardy, a biologist for the tribe. The tribe also placed fertilized eggs raised in the captive breeding program in broodstock boxes that allowed them to hatch in the lake, adding to the existing residual sockeye that were separate from kokanee but did not migrate to the Pacific.

“The tribes placed a priority on preserving the genetic legacy of this unique fish,” Edmo said in an email.

Historically, the building of the Sunbeam Dam on the Salmon River cut off all or most of the migration of salmon to the Sawtooth Valley from 1910 to 1931. That’s when a group of sportsmen dynamited the dam built to produce power to nearby mines. By the 1950s, more than 4,000 sockeye returned and part of the reason they made the comeback was because of the residual sockeye, also living in Redfish.

The building of four dams on the lower Snake River and a fourth dam on the Columbia below nearly wiped out the species until they were listed.

In 2014, biologists began placing pairs of captively bred sockeye from the Redfish Lake stock into Pettit. Three returned to the valley in 2019. Biologists had placed a computer tag in some of the smolts as they left in 2018.

One of those was detected as it migrated through the eight dams on the Columbia and Snake rivers, Tardy said. The last time it was seen, it was swimming over an array designed to read its signal in the Salmon River upstream of Salmon more than a week ago.

The other seven caught were tested with another method and could not be confirmed nor denied as Pettit Lake fish, Powell said. But Tardy was confident some of them came from Pettit.

The fish were taken to Eagle Fish Hatchery where they were tested, measured and cataloged. In September, they will be placed in Pettit along with 50 pairs of captive-bred sockeye.

The Sho-Ban Tribes broke ground earlier this month on a new weir at Pettit in a ceremony celebrating its 30-year effort to save sockeye.

“We are investing in a new future for sockeye salmon and honoring the people who helped preserve this special fish,” Edmo said.

As of last week, 36 wild fish and three hatchery sockeye have returned to Redfish Lake Creek.

At the Sawtooth Fish Hatchery, 21 wild sockeye have returned, along with five hatchery fish, so far.

The first studies on Idaho’s magnitude-6.5 earthquake are out. Here’s what they tell us.

Magic Valley nonprofit announces a site for its children's museum

The future Children's Museum of the Magic Valley will 'engage children of all ages and abilities in learning through imaginative play and discovery.'

I saw a local business was flying a black and white American flag with a thin blue stripe under the American flag. What does this represent?

For the second time in a month, a lottery ticket worth $1 million was sold in south-central Idaho.

Two people have been charged with robbery after a Buhl man said they came into his house and stole his wallet and TV at gunpoint.

Lonesome Larry, the only sockeye salmon to return from the ocean to Idaho’s Redfish Lake in 1992, seen here on display at the MK Nature Center in Boise.

An adult Snake River sockeye is released in Redfish Lake in this 2010 picture.