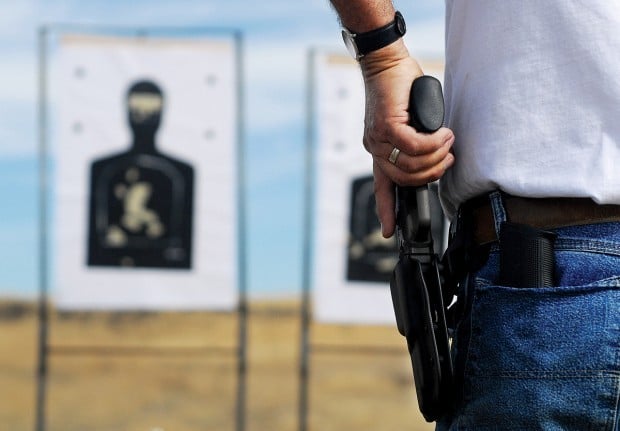 Kimberly resident Dean Johnson draws his gun while target shooting north of Twin Falls on Sept. 26. Johnson is among an increasing number of Idaho gun owners who have applied for concealed weapons permits in Idaho and Utah during the past decade. (ERIC LARSEN/Times-News ) 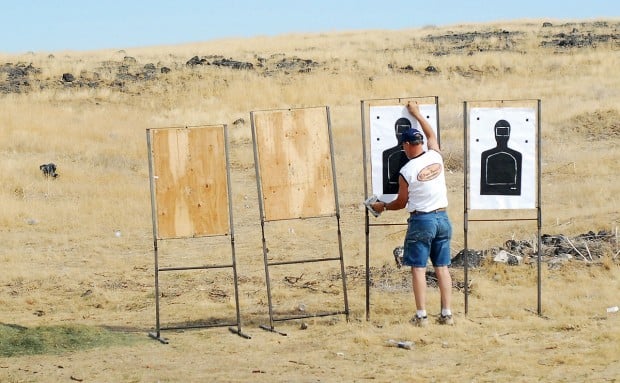 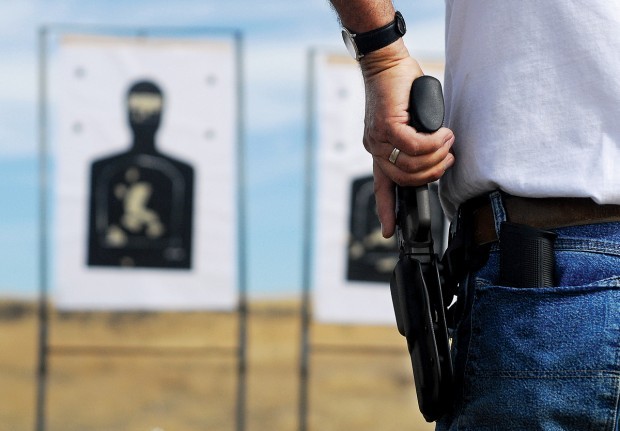 Dean Johnson doesn’t want to leave his safety to chance.

The 57-year-old Kimberly resident travels out of state frequently as a salesman and wants to protect himself from whatever lurks outside the confines of his home.

“Criminals don’t play by the rules,” Johnson said. “I have to be protected.”

Johnson is about to become one of the millions of Americans who are permitted to carry a concealed weapon, having completed a course with Utah Legal Heat, a company that offers concealed weapons instruction — one of many options that meets the requirement for proof of firearms training for the application process. He said he’s never been threatened directly, but he also wants the option of defending himself.

Figures indicate that more Americans like Johnson are seeking permission to carry concealed weapons — including both firearms and knives — at all times. In Idaho alone, there are currently 71,249 valid permits. Neighboring Utah has reported 246,831 valid permits as of June 30 and has seen its number of valid permits rise 458.8 percent since 2001, when 44,173 permits were reported.

There’s no clear-cut reason for the increase. Ask multiple people and you’ll receive multiple answers, from safety concerns to politics and anything in-between. Twin Falls County Sheriff Tom Carter said he heard a lot of panic about the motives of the current Democratic-controlled Congress and White House.

“The most dramatic increase had to do with President Obama,” Carter said of the noted increase in new permits in his county between 2008 and 2009. “People thought he was going to take their guns.”

Then there are more practical reasons. Frank Shoup, 48, of Twin Falls, was another recent student of the Utah Legal Heat class, and he’s getting a permit for peace of mind while he’s out in the wilderness.

“I like to go hunting and fishing, and it may help to protect me if I carry a gun,” he said. “I also took a hunter safety course. I don’t want to shoot anyone.”

Kenya Williams, who works in records and handles concealed weapons permits for Twin Falls County, said she’ll get applications of the most innocuous manner. Aside from allowing owners to carry concealed weapons on their person, permits also allow owners to lawfully conceal weapons in their vehicles.

Carrying a concealed weapon without a permit is a misdemeanor, punishable by up to six months in county jail and up to a $500 fine, according to state code.

“We get farmers’ wives who sometimes drive their husbands’ trucks, which they leave their guns in,” Williams said. “They just want to abide by the law.”

While the numbers indicate an increase in people seeking permits, they can also be misleading. Many states, such as Idaho and Utah, allow non-residents to obtain state concealed weapons permits. It’s difficult to tell how much overlap there is when it comes to individuals who are licensed by more than one state.

Idaho permits are also honored by 26 states, including neighboring Utah, Wyoming and Montana, and Idaho recognizes valid permits from every other state. However, 32 states honor the Utah permit. Only seven states require permit holders to be residents, meaning that Johnson could apply for up to 43 separate permits to cover his travels. He’s seeking the Utah permit as it covers more states that he travels to on business than the Idaho permit covers.

Also muddying the numbers is the fact that counties have different methods of tracking permits: some track valid permits, some track only new issues by year, some only track new applications, and some don’t track these numbers at all.

Chief Deputy Gene Ramsey of the Blaine County Sheriff’s Office said the county does not track the number of issuances or renewals per year. Cassia County Sheriff Randy Kidd did not return multiple phone calls for this report.

“It’s been a dramatic increase from a few years ago,” said Jason Nelsen, a Utah-based attorney who teaches for Utah Legal Heat. “Gun sales always go up in a down economy as people worry about security. As gun sales go up, people’s interest in their ability to use those new guns and carry those guns also goes up.”

Opinions also vary on whether the increase in concealed weapons permits is a good thing or a bad thing.

Peter Hamm, spokesman for the Brady Campaign to Prevent Gun Violence, said his organization is mostly concerned about states like Utah and Florida — which issue thousands of non-resident permits — and the thoroughness of the background checks for those states. “We think it’s irresponsible.”

The U.S. Department of Justice recently announced that Idaho is one of eight states to receive grant funds to improve the Brady background check system. Idaho received $1.9 million from a total of nearly $17 million in federal money.

For others, the permits are peace of mind in an unpredictible world.

“Statistically, we live in a place where none of us will never need a firearm to protect ourselves,” Nelsen said. “Icarry on that very slight chance that Imight need one.”

Laurie Welch contributed to this report.

Bradley Guire may be reached at bguire@magicvalley.com or 735-3380.

Concealed weapons by the numbers

Kimberly resident Dean Johnson draws his gun while target shooting north of Twin Falls on Sept. 26. Johnson is among an increasing number of Idaho gun owners who have applied for concealed weapons permits in Idaho and Utah during the past decade. (ERIC LARSEN/Times-News )