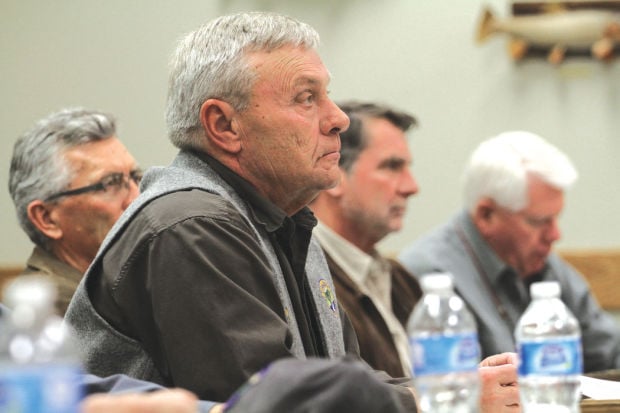 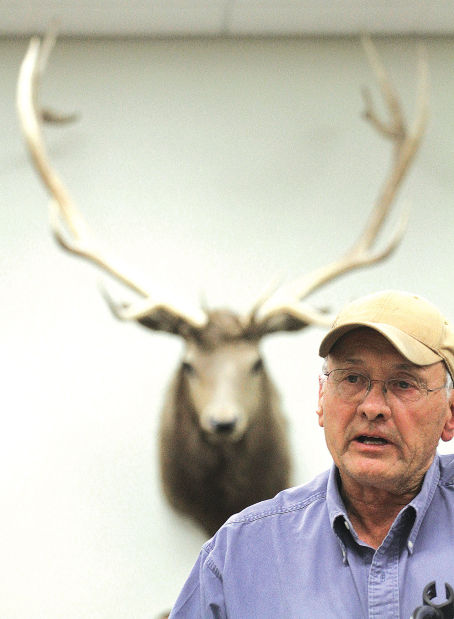 Twin Falls resident Richard Jardine testifies to the Idaho Fish and Game Commission Wednesday night during its quarterly meeting in Jerome. The commission will resume its meeting today starting at 8 a.m. at the Magic Valley Regional Office at 324 S. 417 East, Suite #1.

JEROME, Idaho • Hunters told the Idaho Fish and Game Commission on Wednesday night they were concerned about the number of deer and elk available for harvest.Many blamed the state’s wolf population.

The hunters spoke at the Idaho Fish and Game Commission’s quarterly meeting that started earlier Wednesday morning in Jerome with tours, workshops and other discussions.

The meeting will continue at 8 a.m. today with several presentations and action items up for a decision at the Magic Valley Regional Office 324 S. 417 East, Suite #1, just off Highway 93. Elk management, cutthroat trout and the lasting impacts of this summer’s wildfires will be among the topics discussed.

Yankee Fork area resident Darr Moon said he and his family were concerned about the state’s wolves and urged the commission to take action. He was one of five or so residents to speak against wolves of the dozen or so that testified.

Moon said he knew of at least two people who had been “harassed” or “chased” to their vehicles by wolves.

He said the wolves have caused a “drastic change” in the environment.

“My boys went to school in Stanley and in the springtime there’d easily be 300 elk in the fields out there and now if you see 20 it’s a rarity,” he said.

Kimberly resident Byrd Golay agreed — something needs to be done because every elk lost is lost hunter tax revenue, he said.

“More importantly, we are losing our heritage,” he said.

Golay said he started hunting in the Yankee Fork area — unit 36B — five years ago and saw a few elk. This year, he said he saw mostly wolf tracks.

“The wolves are decimating that herd,” he said. “And more importantly, (that hunt) should be closed off completely. No hunting. It is a lie to take (thousands) of people’s money for what? It’s not a picnic.“

Today, the commission will take up four action items, including the Westslope cutthroat trout management plan — a culturally and economically important fish whose habitat covers about two-thirds of Idaho, including the Clearwater and Salmon River drainages.

The management plan — up for consideration at 10:30 a.m. today — is one of the last fish plans to be finished since a recent updating effort began in 2007. It was purposely done last because of its complexity, wide range and importance, Grunder said.

Westslope cutthroat still occupy 80 percent of its historical range in Idaho, which Grunder said is “pretty darn good” considering the status of the trout in other states.

“In Idaho, we are in pretty good shape as far as Westslope cutthroat trout populations because the vast majority of the land they occupy are protected federal lands such as wilderness or roadless areas,” he said.

Fish and Game managers have seen an upswing in Westslope cutthroat numbers and size since they began aggressively regulating them in the 1970s. The fish is mostly catch-and-release across the state because it is easily overharvested, he said.

Bag limits for areas where cutthroat harvest is allowed will not change in this plan as that is a separate rule-making process, Grunder said.

• Monitor population numbers long term to track health and pinpoint the reasons if the species’ health starts to decline.

• Monitor the trout’s interaction with other non-native trout like brook, brown and rainbow trout, which overlap with much of their habitat and can be very harmful.

• Consider reestablishing populations of the trout where extirpated through bad land or water management.

“We still have a lot of legacy effects out there like timber harvest practices that have added lots of forest roads that add sediments to systems, grazing, mining and really the 900-pound gorilla in the room are non-native species,” Grunder said.

At 1:20 p.m., the commission will be briefed on the 400 comments submitted by hunters regarding the state’s out-of-date draft elk management plan. The plan — written to be a 10-year document — was last updated in 1999.

Toby Boudreau, Fish and Game elk and deer coordinator, said staff will give the commission a report on the type of comments the plan recently received and how they are shaping the document. The commission will not take action on the plan at the meeting. A final decision is planned for early 2014, Boudreau said.

Although the submitted comments were across the board, the most pervasive subject was predators’ influence on elk populations. Those predators included wolves, bears and mountain lions, he said.

The commission will also hear an update at 11 a.m. about the numerous fires that burned more than 400,000 acres in south-central Idaho this summer.

Jerome Hansen, Magic Valley Regional Supervisor, said he will talk about the various follow-up management issues needing to be addressed this winter due to loss of range for deer and elk. Hansen said several hunts this year were closed due to the fires.

“There’s a fair amount of restoration activities going on and then we are going to be getting ready for that elk herd between Mountain Home and Boise along the interstate,” he said. “If we have a really hard winter, there’s just not much for them to eat.“

Hansen said there was a spell of “fortuitous fall rain” that has allowed some of the charred landscape to green again.

“There’s something for them to eat now, but it won’t be there forever if it is covered in snow,” he said.

1 p.m. — Update on outfitting for turkey and waterfowl

Israel strike in Gaza destroys building with AP, other media

Israel strike in Gaza destroys building with AP, other media

JEROME, Idaho • Hunters overwhelmingly back more aggressive wolf population control measures, according to comments made on the Idaho Fish and…

JEROME, Idaho • Idaho Department of Fish and Game brass will pitch a new way to squeeze more revenue from hunters and anglers by creating ince…

BOISE, Idaho (AP) — Idaho wildlife officials trying to aid the recovery of elk populations have hired a hunter to track down and kill wolves f…

Twin Falls resident Richard Jardine testifies to the Idaho Fish and Game Commission Wednesday night during its quarterly meeting in Jerome. The commission will resume its meeting today starting at 8 a.m. at the Magic Valley Regional Office at 324 S. 417 East, Suite #1.