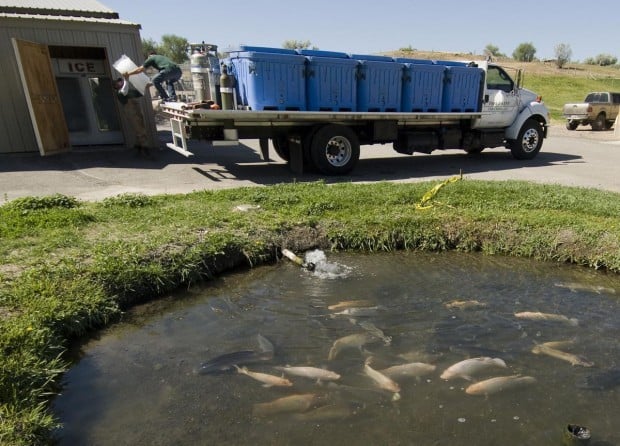 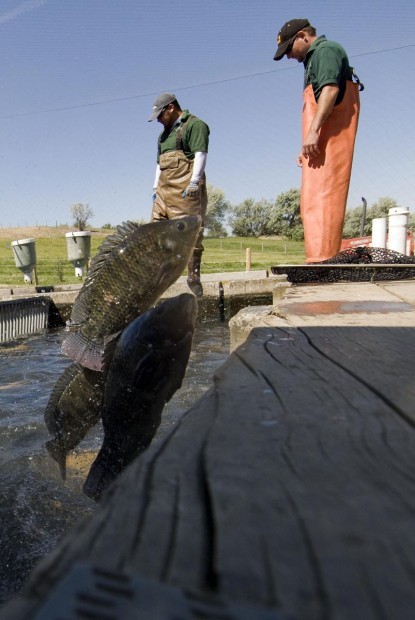 Eric Hernandez, left, and Jason Barnes prepare for tilapia harvest Thursday as fish try to leap from a raceway at First Ascent Fish Farm in Buhl. First Ascent is one of the few Magic Valley fish farms that do not send their fish to processors but instead deal with live products and deliver live fish to out-of-state customers.

BUHL • Oysters plucked from the cold waters of Puget Sound are alive in the sagebrush-covered hills just outside Buhl. Just find the sign that reads “shrimp and oysters” and follow the arrow to Don Campbell’s First Ascent Fish Farm.

Campbell has owned First Ascent since 1986. Over the years the farm’s products have diversified to compete in the changing landscape of aquaculture. The farm started out raising trout and switched to catfish. Then when the company could no longer compete with catfish imported from Vietnam it switched to tilapia, a fish found in the warm waters of Africa and the Mediterranean.

But no matter the type of fish swimming in First Ascent’s tanks, Campbell’s wholesale and retail customers get what they want no matter where they are — even if that means transporting live tilapia 10 hours to Seattle by truck.

“We ship 52 weeks out of the year,” Campbell said.

Every Tuesday and Thursday, workers load up 2,000 pounds of tilapia that travel 2,700 miles to 14 family-owned stores and restaurants in Seattle. First Ascent does not deliver in Idaho because there are few restaurants and stores with tanks, but locals can buy the tilapia by visiting the farm.

Live tilapia is in demand, said Gary Fornshell, University of Idaho aquaculture extension educator. “Tilapia is the fifth most consumed seafood in the U.S.”

Campbell’s business is not the only fish farm in Idaho that live-hauls its product; Fornshell estimated there are about five fish farms that sell live fish to local customers in the Magic Valley. But First Ascent is one of the few family-owned farms in Magic Valley that deal strictly with live seafood and, Fornshell believes, the only one that owns trucks equipped with tanks and oxygen systems.

“We do not process; everything is live,” Campbell said.

When the First Ascent trucks return to Buhl from Seattle, they do not arrive empty. Fresh from the sea are pounds of oysters and shrimp for Idaho customers. But they bring back only enough to last three or four days. The company does take orders, which increase especially around the Fourth of July. Other items such as Dungeness crab or lobster are available by special order.

Because most of the products are live they need to be cooked immediately, and First Ascent provides some instructions on how to prepare them.

The University of Idaho extension is also a good source of information for seafood recipes and preparation tips. A couple of years ago, Fornshell and Rhea Lanting, food and consumer science extension educator, co-authored “Seafood at Its Best” a curriculum for training nutrition educators, dietitians and food-service professionals.

“Eighty-six percent of the seafood we eat is imported,” Fornshell said. “Domestic producers can’t compete with the international market ... they found a market that prefers live.”

Even in a seafood city like Seattle, where the Puget Sound is big competition, Campbell said he’s still able to compete. People in Seattle are health-conscious, he said, and his company is able to ensure a top-quality product something he said imported seafood can’t guarantee.

“Our competition is not another domestic producer or company, it’s countries like China” Campbell said.

Production manager Eric Hernandez, 24, has worked at First Ascent since he was in high school. Now in his sixth year at the company, Hernandez is in charge of breeding and growing the type of fish customers prefer. He has found they like a tilapia with 30 to 40 percent red color.

Twice a week, First Ascent workers clean all the farm’s pipes and scrub the concrete. In the morning and afternoon they pick up the “morts” or dead fish.

Each week 4,000 pounds of tilapia are carefully loaded by net to maintain their appearance.

First Ascent’s customers are picky when it comes to their tilapia. If even a scale is missing, they won’t buy.

“I’ve brought fish into the store and they will ask, ‘Are these fresh?’” Campbell said. Yes, they’re alive, he’ll reply.

“Yes, but are they fresh?’” the store owner will say and start to open the gills, inspecting their brightness and the clarity of the eyes.

If First Ascent is a hands-on company, its customers are equally involved.

“They want a very fresh product with top-quality freshness, and it’s not easy,” Campbell said.

He estimates that 98 to 99 percent of his customers are Hispanic or Asian.

“The market that Don sells to is a prominently an ethnic market,â€ Fornshell said. “That’s the type of seafood they prefer where you pick out a fish that’s swimming. In a lot of those cultures the fish is prepared whole with the heads still on.”

If you want to go to First Ascent to pick up a fresh tilapia or two for dinner, be prepared for them to be really fresh - straight out of the water, into a plastic bag and into your car. You’ll have to kill and clean the fish yourself.

“You like to have fresh fish and it’s not too much; it’s more expensive in the stores,” said Peyman Ebaden Ahwazi, who is originally from Iran but lives in Twin Falls.

Ebaden Ahwazi was introduced to First Ascent by an American friend and is now a frequent customer. He also visits other fish farms in the area that sell directly to consumers.

“The taste is better and more delicious,” Ebaden Ahwazi said. “We don’t spend too much gas, and it’s beautiful and natural here.”

“It has a different taste,” Katee said.

Live tilapia is $2.50 a pound. Live oysters are $40 for a 5-dozen bag. Frozen shrimp is $20 for a 4-pound package of small shrimp with heads still on, and $25 for 4 pounds of medium shrimp without heads; individually quick-frozen medium shrimp is $10 for a 1.5-pound bag. Prices for oysters and shrimp can rise or fall based on world market prices.

Tilapia and Vegetables in Foil

Cooking fish in foil is similar to the French method of cooking in parchment paper called “en papillot” or the Italian method called “cartoccio.”

Salt and pepper to taste

Preheat oven to 425 degrees (you can also do this on a grill). Place one fish fillet in the center of each piece of foil, sprinkle with thyme, marjoram and lemon juice.

Place frozen vegetables next to fish. Sprinkle with green onions, salt and pepper. Top with margarine or butter. Seal packets (leave some room for air circulation) and place on a baking sheet.

This is a recipe that calls for creativity. You can vary the types of herbs (dill is usually a good choice with fish). You can substitute fresh vegetables. Sliced tomatoes and zucchini are good suggestions. Try a splash of white wine instead of butter.

1/2 cup whipping cream or half and half

Paprika, salt, and pepper to taste

Cook spinach in a little water, just a short time so that it stays green. Drain well. Add the cream. Thicken with flour.

Arrange oysters on the half shell on a jelly roll pan (you can use a layer of rock salt to keep the shells upright). Sprinkle the juice of 1/2 lemon over them. Top each oyster with the spinach mixture. Add Hollandaise sauce, two cheeses, breadcrumbs, paprika, salt and pepper.

Peel and devein your shrimp. Place shrimp in a gallon-size plastic bag and set bag in a bowl.

Pour the rest of the marinade into the bag of shrimp and zip the bag. Make sure that the shrimp are well coated. Allow the shrimp to marinate in the refrigerator for about 1 hour.

Large shrimp can placed directly on the grill. Smaller shrimps should be threaded onto skewers. Grill over medium high heat, for about 2 to 3 minutes on each side. Brush reserved marinade over shrimp while cooking.

Signs that your phone may have been hacked

Signs that your phone may have been hacked

Grammar police! Are you using 'to whom' wrong?

Grammar police! Are you using 'to whom' wrong?

Eric Hernandez, left, and Jason Barnes prepare for tilapia harvest Thursday as fish try to leap from a raceway at First Ascent Fish Farm in Buhl. First Ascent is one of the few Magic Valley fish farms that do not send their fish to processors but instead deal with live products and deliver live fish to out-of-state customers.