SALT LAKE CITY (AP) — After more than a year of attending church virtually, Monique Allen has struggled to explain to her asthmatic daughter why people from their congregation of The Church of Jesus Christ of Latter-day Saints don’t wear masks. Allen said she has taught her daughter that wearing a mask is Christlike, but now she worries her child feels like an outcast.

Church leaders recently issued their strongest statement yet urging people to “limit the spread” by getting COVID-19 vaccines and wearing masks. But Allen said she fears it’s still not enough to convince the many families in her congregation who refuse to wear masks and have succumbed to anti-vaccine misinformation.

Members of the faith widely known as the Mormon church remain deeply divided on vaccines and mask-wearing despite consistent guidance from church leaders as the highly contagious delta variant of the coronavirus spreads.

About 65% of Latter-day Saints who responded to a recent survey said they were vaccine acceptors, meaning they’ve gotten at least one dose or plan to soon. Another 15% identified as hesitant, and 19% said they would not get the vaccine, according to the survey this summer from the Public Religion Research Institute, a polling organization based in Washington, and Interfaith Youth Core.

The survey found 79% of white Catholics and 56% of white Evangelical Protestants identified as vaccine acceptors.

Allen, a church member living in Wisconsin, is among a contingent who fear fellow members who refuse to get vaccinated are allowing their political views to supersede their loyalty to a faith that largely prioritizes unity and obedience.

The message she has shared with her 8-year-old daughter is that “of course Christ would wear a mask, of course he would get vaccinated because he’s a loving person,” she said. “And that’s the only way you can take care of people these days is doing these simple things.”

Other church members are upset that their leaders aren’t letting them exercise their own decision-making about vaccines and masks. The Utah-based religion of 16 million members worldwide is one of many faiths grappling with how best to navigate the pandemic’s lingering effects.

Divisions on masking and vaccinations in the Latter-day Saint faith appear to be tracking along political lines, with conservative members being more hesitant, said Patrick Mason, associate professor of religion at Utah State University. Mason said the church’s divide is indicative of a larger pattern in the United States of political ideologies shaping people’s religious commitments.

“The common perception of Mormons and Mormonism is that when church leaders speak, church members listen and do what they’re told,” said Mason. “This has revealed sometimes how conditional that loyalty can be.”

The Latter-day Saint faith was one of the first to respond to the COVID-19 pandemic. In March 2020, church leaders suspended all church gatherings and closed temples. The church has also held three consecutive major conferences remotely since the pandemic began. The twice-yearly conference usually brings about 100,000 people to Salt Lake City over two days.

Many faith leaders have spoken in support of vaccinations, including Church President Russell M. Nelson, a former heart surgeon who got the vaccine in January and encouraged members to follow his example.

Church-owned Brigham Young University in Utah has asked students to report their vaccination status but is not requiring vaccinations. Masks are required in classrooms and any indoor spaces where social distancing isn’t possible.

Missionaries who are not fully vaccinated are also unable to receive an assignment outside of their home country.

Regarding masks at services, top church officials have said it’s up to bishops to encourage people to follow local public health guidelines.

In mid-August, they went so far as to release a statement calling on members to get the vaccine, which they described as “safe and effective.”

Among other denominations in the U.S., faith leaders have varied widely in how they address the issues of vaccinations and mask wearing. To a large extent, there has been vocal support for getting vaccinated — including from top leadership of conservative bodies such as the Southern Baptist Convention and the U.S. Conference of Catholic Bishops.

However, some Catholic prelates and evangelical pastors have been sharply critical of the the vaccine campaign and masking mandates, and others have shied away from addressing those issues for fear of angering some congregation members.

An August AP-NORC poll found that among white evangelicals, 51% are at least somewhat confident in the vaccines to be effective against variants, compared with 73% of Catholics, 66% of white mainline Protestants such as Presbyterians and Lutherans, 65% of nonwhite Protestants and 67% of the religiously unaffiliated.

Some Latter-day Saints have accused those who promote anti-vaccine rhetoric of apostasy, a term that is associated with wickedness and describes when individuals turn away from church principles.

Kristen Chevrier, co-founder of a Utah-based health freedom group that has advocated against vaccine mandates, said the church should not be involved in health choices, and she worries people are being discriminated against based on their vaccine status.

Chevrier, who is a member of the faith, said she rejects the idea that people who are anti-vaccine are apostates. She cited the church’s history of encouraging members to seek their own personal revelations with God.

“How can we say that there’s a blanket statement that applies to everyone regardless of their personal revelation,” said Chevrier, who’s based in American Fork, about 30 miles (50 kilometers) south of Salt Lake City.

Many members have voiced concerns on social media that pro-mask and pro-vaccine sentiments aren’t shared by all regional church leadership, with some describing their experiences as “bishop roulette.”

Unmasked bishops at an Idaho church read the statement from top church officials to the congregation, but only a few chose to start wearing masks.

One member, Marie Johnson, said she has been disappointed that so many in her community have heeded misinformation on social media rather than church leadership’s continued calls for vaccination.

“You can find something on the internet to support any position you want to take,” said Johnson. “Why would you choose the side that doesn’t include your faith leader?”

But some churches began resuming masking practices even before the leaders’ statement.

One Salt Lake City church has been encouraging vulnerable people to participate in meetings virtually and sent a message to congregants in early August recommending that everyone wear masks and get the vaccine.

“Our faith leaders have been so consistent from the very beginning,” said Søren Simonsen, of Salt Lake City. “And to hear people say, ‘This is a hoax, it doesn’t matter, it’s not affecting us,’ when millions of people have died, it’s heartbreaking.”

A winter wonderland along the canyon rim

NEOWISE in the night sky

How to introduce pet cats to each other

The Church of Jesus Christ of Latter-day Saints renewed its prior calls to members to get a COVID-19 vaccine and to wear face masks in public gatherings Thursday.

Former Utah governor and U.S. Health and Human Services secretary Mike Leavitt was named as the new president of The Tabernacle Choir at Temple Square on Friday.

“It was shameful for Brad to suggest today that Idahoans must make a specific medical choice in order to show love for their neighbors,” McGeachin said in a tweet.

As local hospitals fill up, the Boise VA makes a rare offer

As the battle intensifies in Treasure Valley hospitals, the Boise Veterans Affairs Medical Center has reached out to them with an unprecedented offer.

‘The hospitals are full’: Idaho adds over 1,200 cases as health care system falters

The three largest health care providers in the Treasure Valley all cut back on services Tuesday as they deal with a mountain COVID crisis.

A joint letter released Wednesday from 29 Idaho health care groups seeks to express “alarm at what we are witnessing now, and let you know what you can do to help.”

“I must tell you that we are losing the COVID battle, and patients are dying unnecessarily.”

The Church of Jesus Christ of Latter-day Saints has released a rendering of the planned Burley temple.

“Mission-sending agencies from the United States have the real opportunity to be vaccinated, and they’re going to places around the world that don’t.”

LDS church to require masks in temples amid COVID surge

The Church of Jesus Christ of Latter-day Saints announced Wednesday that masks will be required inside temples to limit the spread of COVID-19.

Harris: 'The Passover story is powerful' 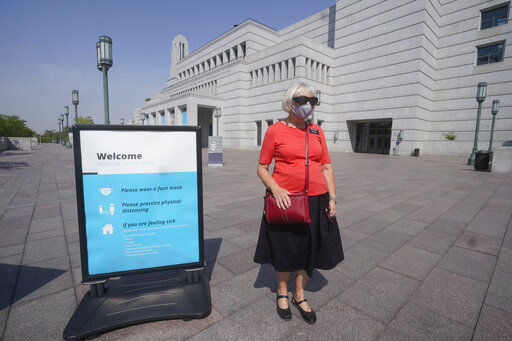 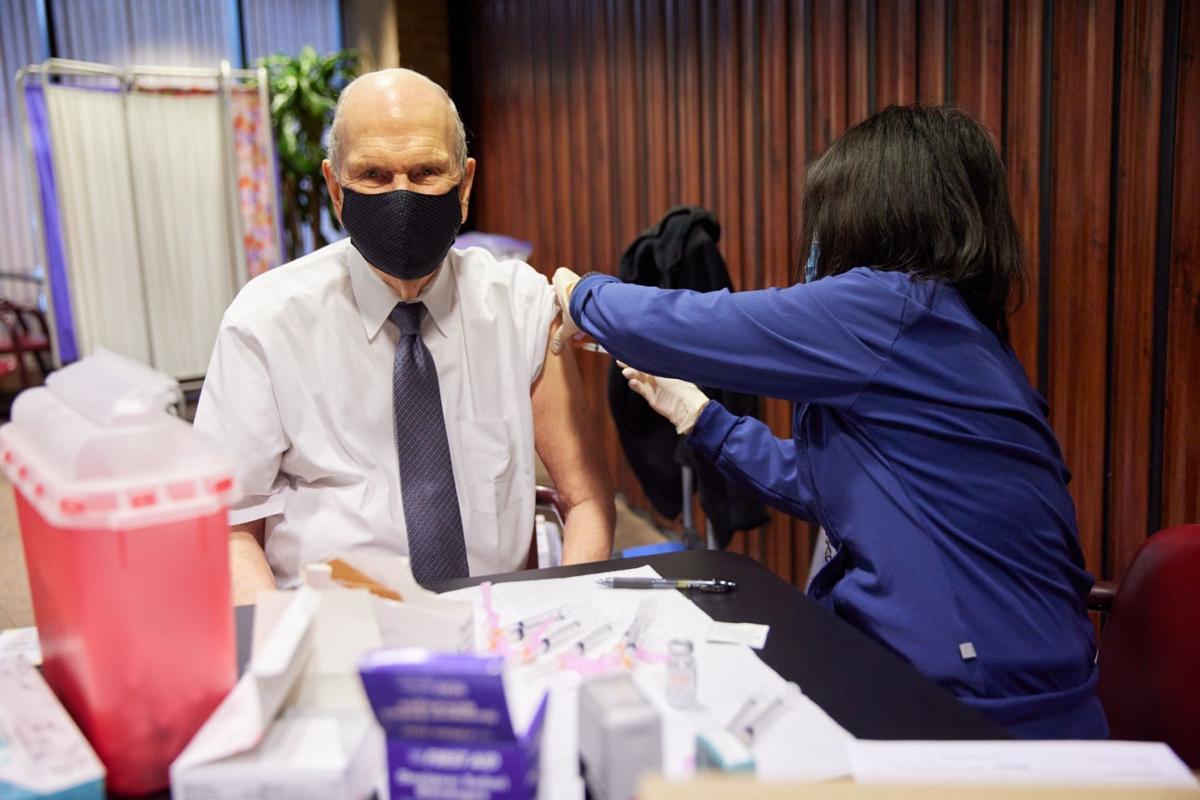