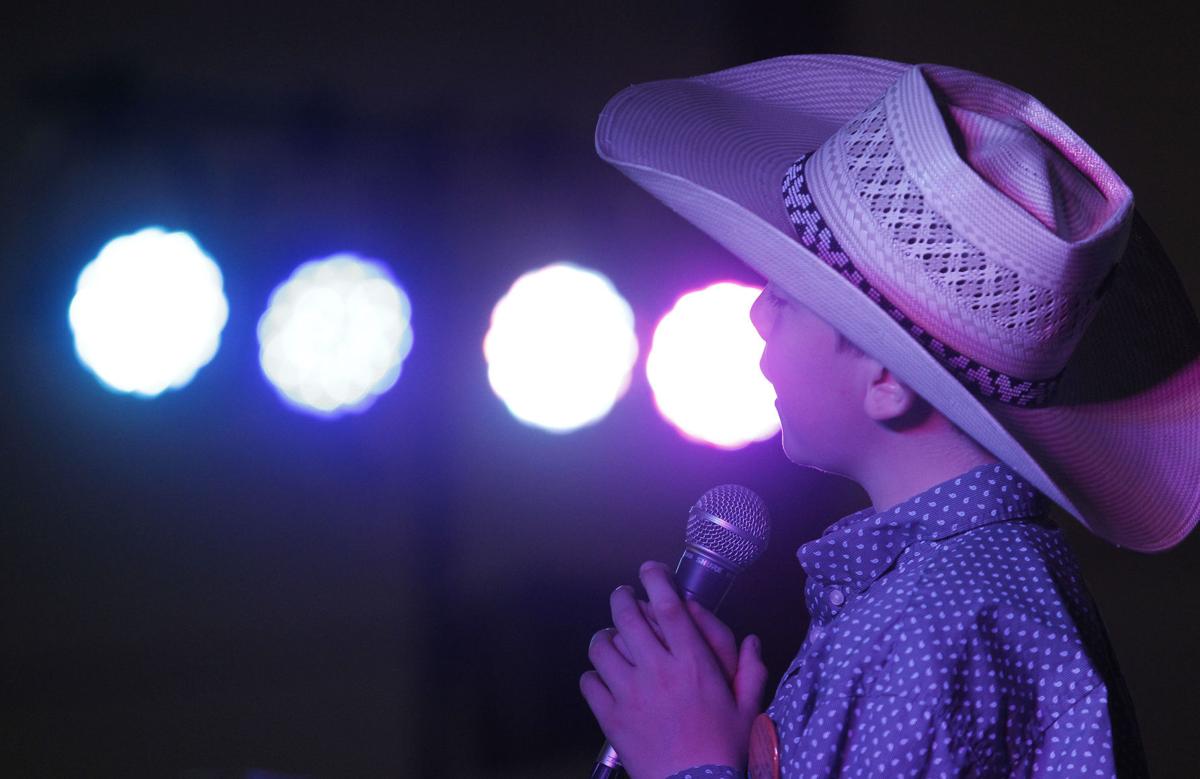 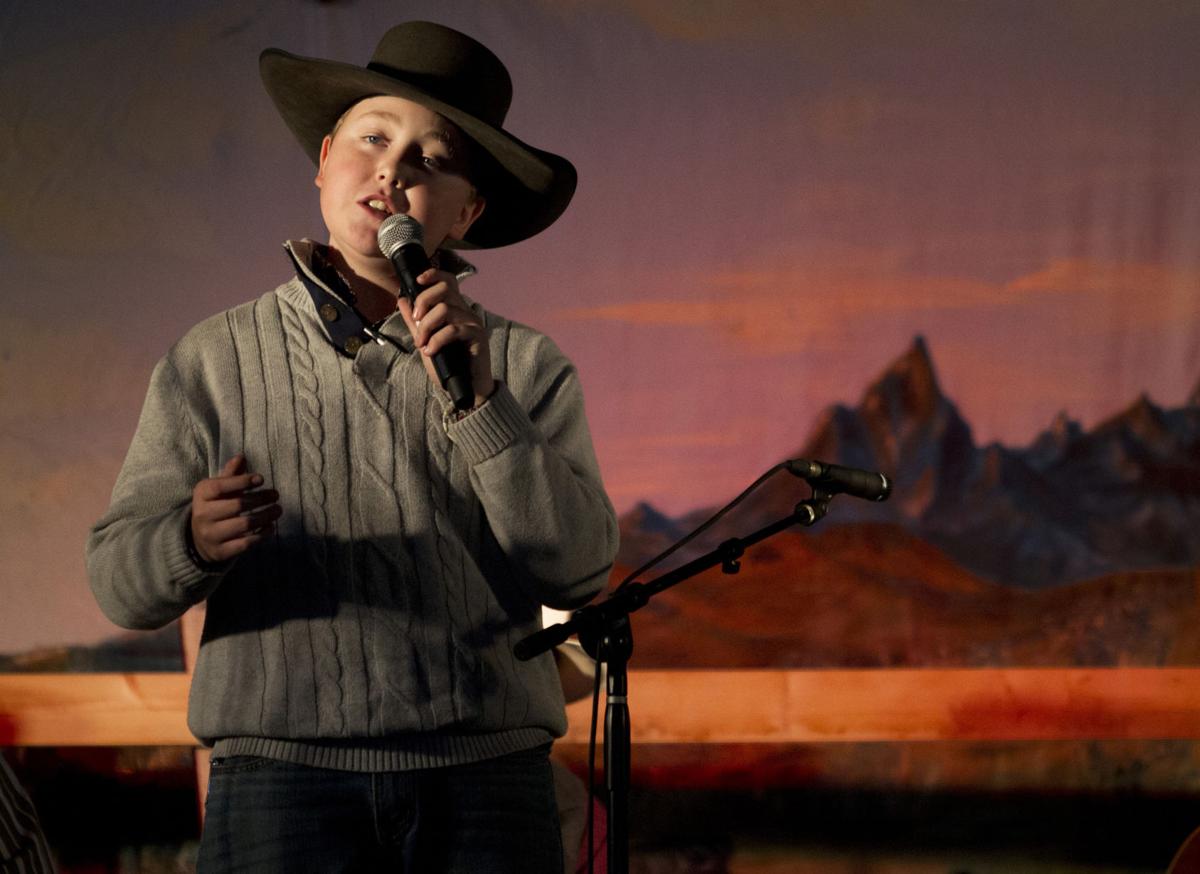 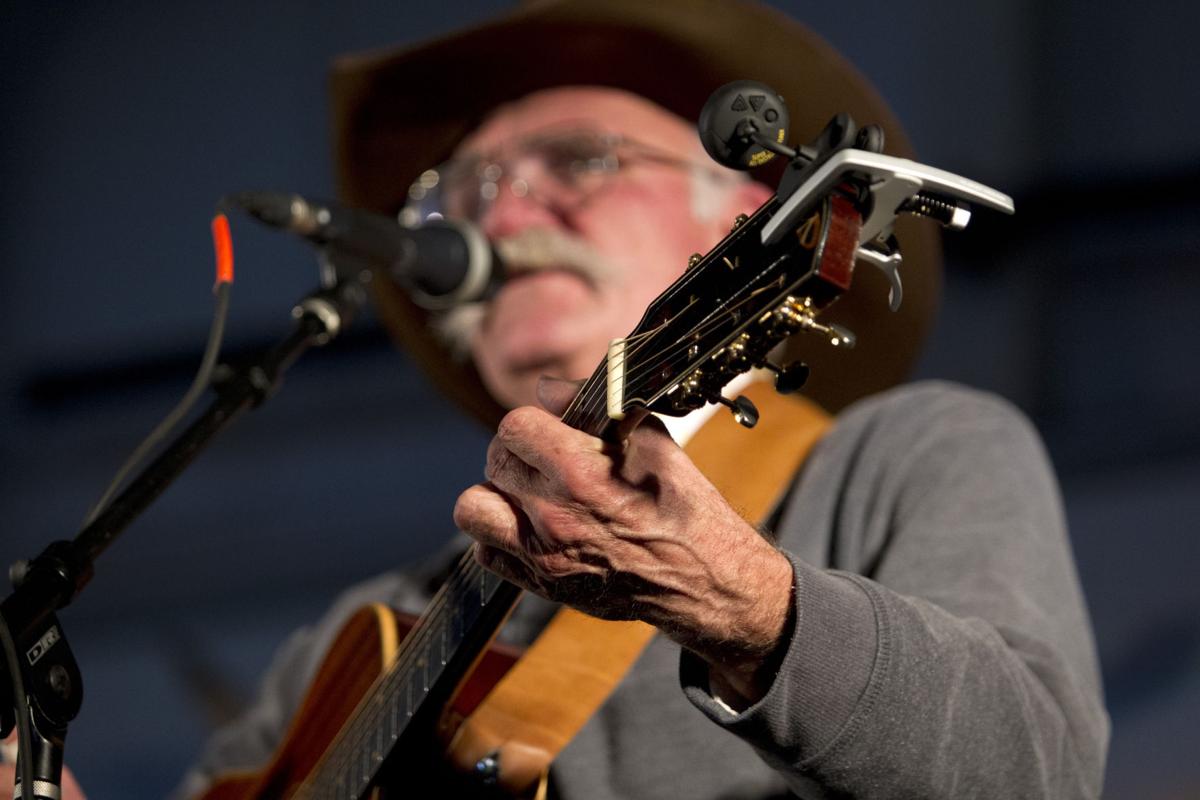 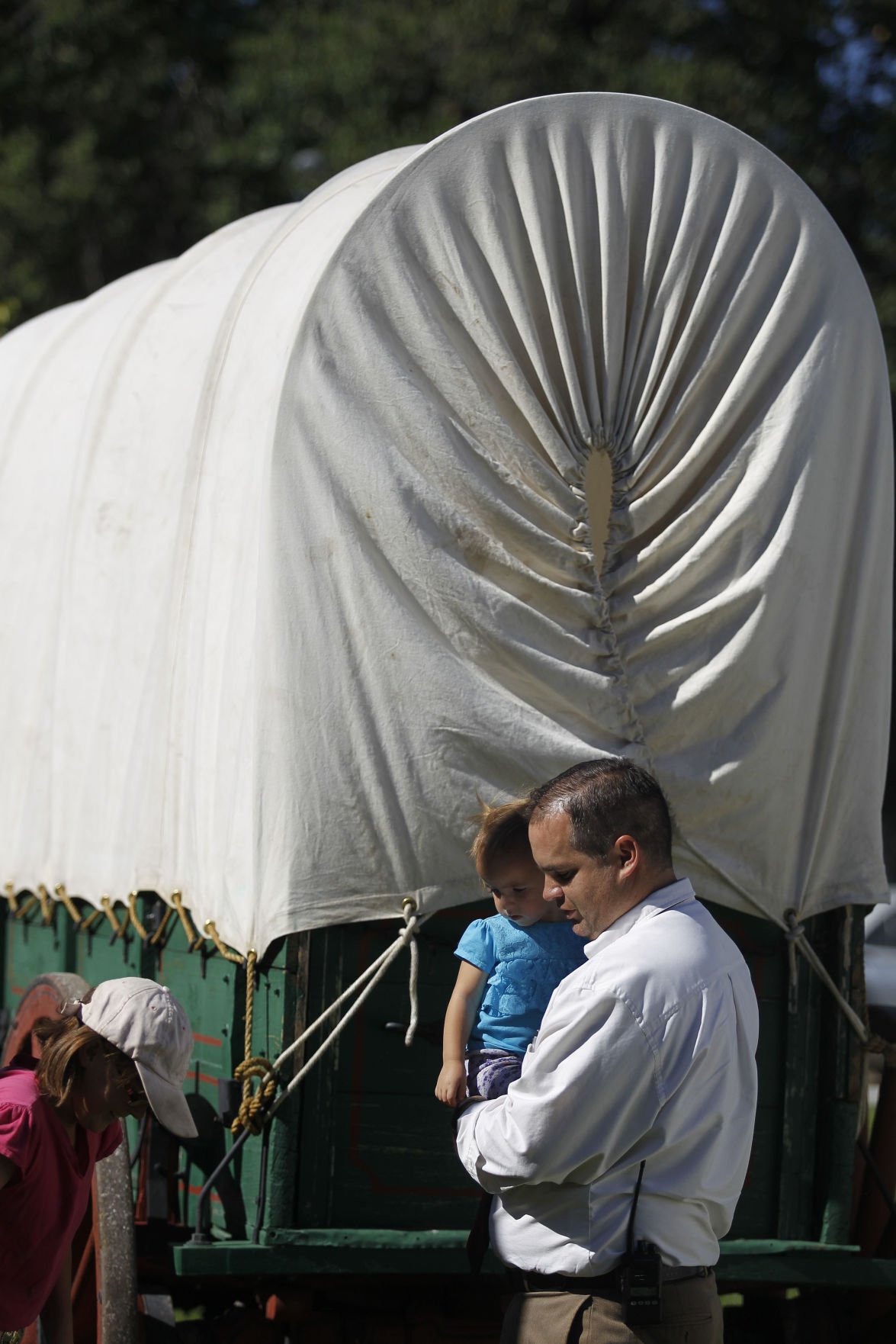 Robert Newey and his daughter Elizabeth Newey, 20 mos., check out a covered wagon during the annual Lost 'N Lava gathering Friday, Sept. 19, 2014, at the Lincoln County Fairgrounds in Shoshone. 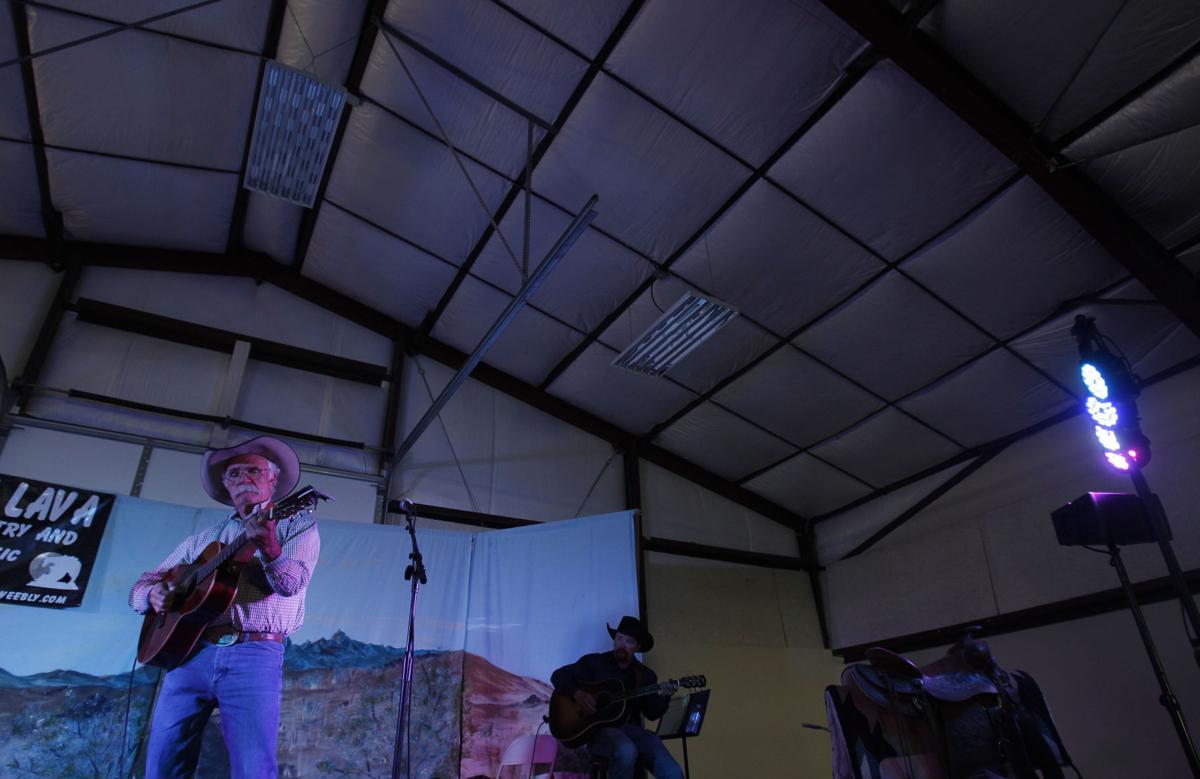 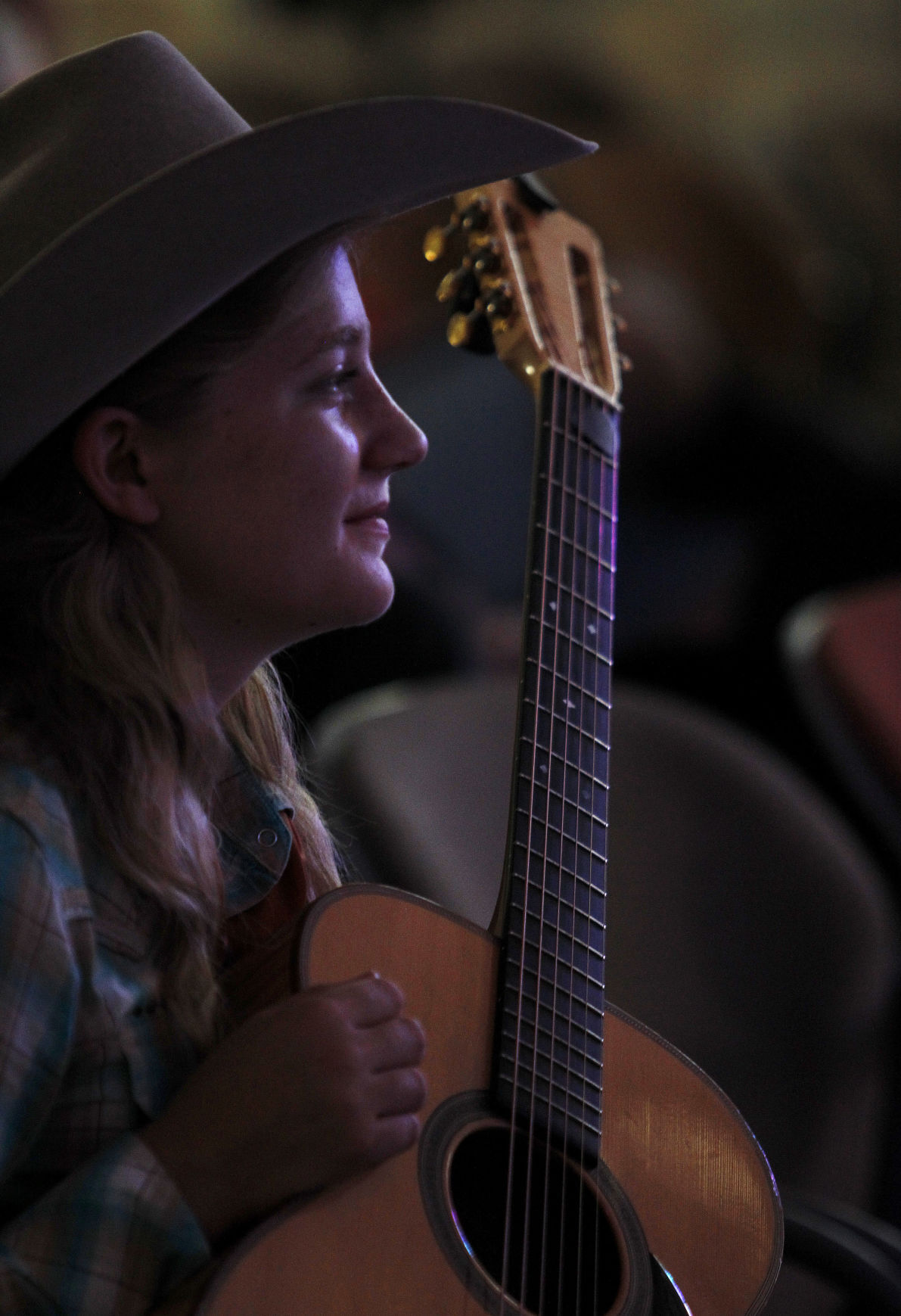 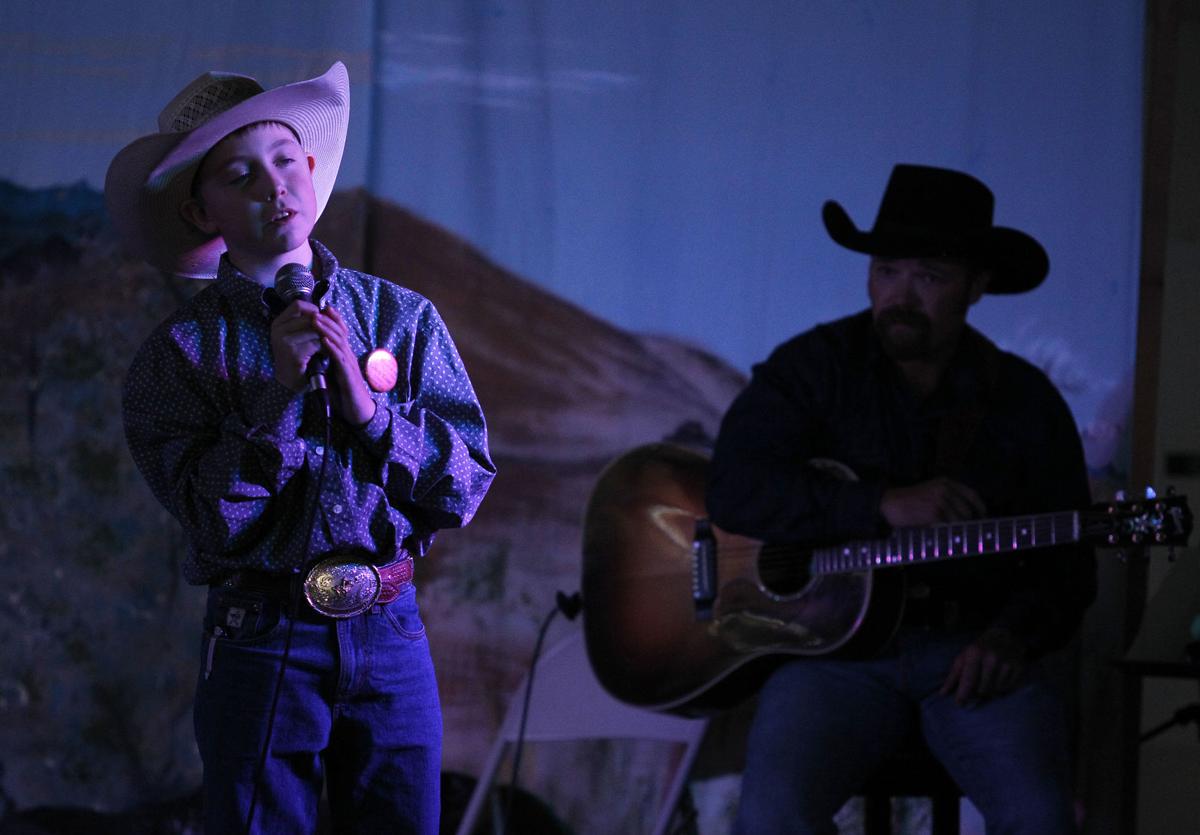 Tetona Dunlap For the Times-News

Lost N Lava will be held at the Lincoln County Community Center and Fairgrounds. Day shows will begin at 1 p.m. on Friday and at noon on Saturday. All day shows are free to the public.

Evening concerts begin at 7 p.m. on Friday and Saturday night with a pre-show beginning at 6:30 p.m. inside the Community Center.

The High Country Cowboys will headline Friday night’s concert, which will also feature the Panhandle Cowboys and A.K. Moss. Saturday night will feature Dom Flemons, Andy Hedges and will also have Tony Argento and Travelin’ Miles and Honey Bear.

In 2005, Flemons co-founded the Carolina Chocolate Drops, which won a Grammy for Best Traditional Folk Albums in 2010 and were nominated for Best Folk Album in 2012. Flemons is considered an expert player on the banjo, guitar, harmonica, jug, percussion, quills, fife and rhythm bones.

Hedges hosts a podcast, “Cowboy Crossroads,” which features in-depth interviews with fellow musicians and poets. He has performed many times with folk legend Ramblin’ Jack Elliott and is a regular to the National Cowboy Poetry Gathering held in Elko, Nevada.

“Committee members have been working hard all year to bring a quality western music and poetry event to southern Idaho and it should be a great show,” says a press release from Lost N Lava.

Each night will have a pre-show starting at 6:15 p.m. and with the concert beginning at 7 p.m.

The event usually draws about 500 people over the two days to Shoshone.

“There was a slight concern at the beginning in March but because our volunteers, entertainers and our sponsors have all stepped up to make sure this year’s event can continue,” Reese said. “The organization has developed an extensive safety plan for the weekend event.”

In addition to music, there will also be vendors, mountain man displays, black powder shooting and vintage vehicle displays.

“People should check out Lost N Lava Cowboy Gathering because it is an incredibly unique one of a kind music event to the area,” Reese said.

Evening concert tickets for Friday and Saturday are available online and can be purchased at the door. Reserve seating is $25 per ticket with limited seating. Weekend general admission tickets are $20 or $35 for both Friday and Saturday night concerts. For more information, go to lostnlavagathering.com or call 208-886-7787.

Oscar-winning actor Jeff Bridges says he is being treated for lymphoma. Bridges' Hollywood career stretches over six decades and has starred in over 70 films including "True Grit" and "The Big Lebowski."

Put on your costumes and take the family to check out these three Halloween events that are open to children of all ages.

LONDON (AP) — The chair of Britain’s Hay literary festival said Sunday the event will not return to Abu Dhabi after one of the festival’s curators alleged that she was sexually assaulted by the tolerance minister of the United Arab Emirates while working with him. Lawyers for the minister later denied her account.

Gifty new and unusual pandemic-proof games for the holidays

NEW YORK (AP) — The pandemic has proven there's no shortage of games to keep families, couples and kids amused. The classics are ever-present, but a range of new or off-the-beaten-track gift entries are available.

PARIS (AP) — The streets of Paris and eight other French cities were deserted on Saturday night on the first day of the government-imposed 9 p.m. curfew that is scheduled to last for at least four weeks.

These are some of the strangest items TSA won't let you bring in your carry-on bag.

SANTA FE, N.M. (AP) — Workers at a popular immersive arts entertainment project were voting Monday on whether to unionize under the Communications Workers of America umbrella, amid economic uncertainty linked to COVID-19.

ROME (AP) — Pope Francis became the first pontiff to endorse same-sex civil unions in comments for a documentary that premiered Wednesday, sparking cheers from gay Catholics and demands for clarification from conservatives, given the Vatican’s official teaching on the issue.

Robert Newey and his daughter Elizabeth Newey, 20 mos., check out a covered wagon during the annual Lost 'N Lava gathering Friday, Sept. 19, 2014, at the Lincoln County Fairgrounds in Shoshone.