Bored with your surroundings? Justin and Hailey Bieber are showing off their lives in their Toronto home in a new series, while Hulu this week is premiering a documentary looking back at an early 1990s isolation tale — Biosphere 2.

Even if you already know the answers, a re-airing of last year's epic "Jeopardy!" Greatest of All Time tournament offers a chance to relive Ken Jennings' greatness, while the Rolling Stones are revisiting six of their concert tours on YouTube.

Later in the week, Erykah Badu and Jill Scott will face off in the latest edition of the uber-popular "Verzuz" series, and just in time for Mother's Day, Comedy Central will debut a new documentary featuring Awkwafina, Jim Gaffigan, Tig Notaro and other comics and their moms.

Here's a collection curated by The Associated Press' entertainment journalists of what's arriving on TV, streaming services and music platforms this week.

— "Spaceship Earth": Has a vision of life prospering under quarantine ever felt more foolhardy? Matt Wolf's documentary, on Hulu Friday, chronicles the experience of the Biosphere 2. In 1991, eight people moved into the self-contained replica of Earth's ecosystem in one very audacious closed experiment. Expect high levels of familiarity.

— "Becoming": Unknown until last week, this Netflix documentary trails Michelle Obama on her 2018-2019 34-city book tour as she embarks on a new life post-White House. The film, directed by Nadia Hallgren is both glossy and intimate, capturing the former first lady on and off stage. Starts streaming Wednesday. (Read the AP's review here.)

— "Rewind": Sasha Joseph Neulinger's film, one of the highlights of the 2019 Tribeca Film Festival, is a work of searing autobiography. Neulinger uses home-video footage to investigate the sexual abuse he suffered as a child and uncover deeper layers of family trauma. The film, available for digital rental Friday and airing on PBS May 11, isn't always easy to watch. But "Rewind" is also about healing and halting inter-generational cycles of abuse. That makes Neulinger's film not just moving but heroic.

—Saul Bass: To celebrate the centennial of the legendary graphic artist, the Criterion Channel on Sunday will line up 20 movies that featured Bass' groundbreaking title sequences, from his breakout film, Otto Preminger's "The Man With the Gold Arm," to Martin Scorsese's "The Age of Innocence." Even when the movies aren't great, the titles are dazzling.

What's Coming and Going From Hulu in May 2020

Here's what's coming to Amazon and Netflix in May 2020

— Erykah Badu vs. Jill Scott: The queens of the neo-soul movement will battle it out on Instagram Live — marking the first female showdown in Swizz Beatz and Timbaland's epic "Verzuz" series. The songstresses will follow the record-breaking Babyface-Teddy Riley faceoff that exploded on social media and had more than 500,000 viewers. With R&B hits for days and feverish fans for decades, Badu and Scott are sure to provide another viral moment in music. The Saturday battle technically starts at 7 p.m. EDT but that's only if Badu is on time.

— The Biebers: Following his reality series on YouTube, Justin Bieber and model-wife Hailey Bieber will debut a new series on Facebook Watch on Monday. The 12-episode "The Biebers on Watch" follows the famous couple's life in Toronto and will be filmed on go-pros positioned around their home. New episodes will be available Monday, Wednesday and Friday.

— Hayley Williams: The Paramore frontwoman is finally releasing her solo debut album on Friday. The 15-track "Petals for Armor" was preceded by two EPs — "Petals for Armor I" and "Petals for Armor II" — and the album was produced by her Paramore bandmate Taylor York. Williams and York won the best rock song Grammy in 2015 for writing the Paramore pop hit "Ain't It Fun." More Grammys might be in their future.

— "Jeopardy! The Greatest of All Time": The repeat airing unfolds in 10 daily half-hour episodes starting Monday (check local listings for time, station). The contest with superstars Ken Jennings, Brad Rutter and James Holzhauer will be book-ended by Jennings' first and last games from his 2004 record-setting 74-game streak. No spoilers, please.

— "Dead to Me": Netflix's dark comedy is back for its 10-episode second season Friday, with even wilder twists ahead for widow Jen (Christina Applegate) and Judy (Linda Cardellini), an unlikely, forged-in-fire pair. For those weighing whether to join the show's addicted fans, a season-one binge session should be all that's needed to get you on the bandwagon.

— "I Know This Much is True": Mark Ruffalo gives yet another worthy performance in HBO's limited series adapted from Wally Lamb's 1998 novel. Three-time Oscar nominee Ruffalo plays opposite himself as twins Thomas and Dominick, the former damaged in body and soul and the latter his long-time protector. The six-part series (9 p.m. EDT Sunday) also features Rosie O'Donnell, Archie Panjabi and Melissa Leo.

— "Call Your Mother": Like mother, like comedian, or so it seems on Comedy Central's documentary about comics and their moms. The film is by turns revealing, raucous (very) and charming, with the mothers emerging as clear sources of inspiration for their talented offspring. It airs 10 p.m. EDT Mother's Day, Sunday, at 10 p.m. EDT, with Awkwafina, Jim Gaffigan and Tig Notaro among those featured.

Worth Watching: A 'Star Wars' Treat From Disney+, a Virtual 'All Rise,' Acorn's 'Gold Digger'

'Natalie Wood: What Remains Behind' Looks at the Life Beyond the Tragedy

Here's a collection of what's arriving on TV, streaming services and music platforms this week.

Michael Jordan's "The Last Dance" hit new heights for ESPN documentary viewership. If you've got ESPN+, you've got access to over a hundred "30 For 30" documentaries. Use this generator to find your next one.

Dolly Parton on her songs becoming 'Heartstrings' and her LGBTQ fans

The beloved singer/actress/writer shares what Golden Globe winner Kathleen Turner brought to her role in the 'These Old Bones' episode.

'DC's Stargirl' renewed for Season 2, to air exclusively to CW

Season 1 episodes are currently released Mondays on DC Universe and Tuesdays on The CW.

Worth Watching: How women got 'The Vote,' TCM's Star of the Month (Tony Curtis), guest hosts for Kimmel

Plus, 'Jeopardy!' revisits the 2019 Tournament of Champions.

Plus, '60 Minutes' continues strong on CBS, but how did NBC's 'NASCAR Cup Series' do over the holiday weekend?

What's coming and going from Hulu in July 2020

There are tons of options, from the original movie 'Palm Springs' to network favorites.

'Hanna,' 'Absentia' and more are coming to the streamer this summer. 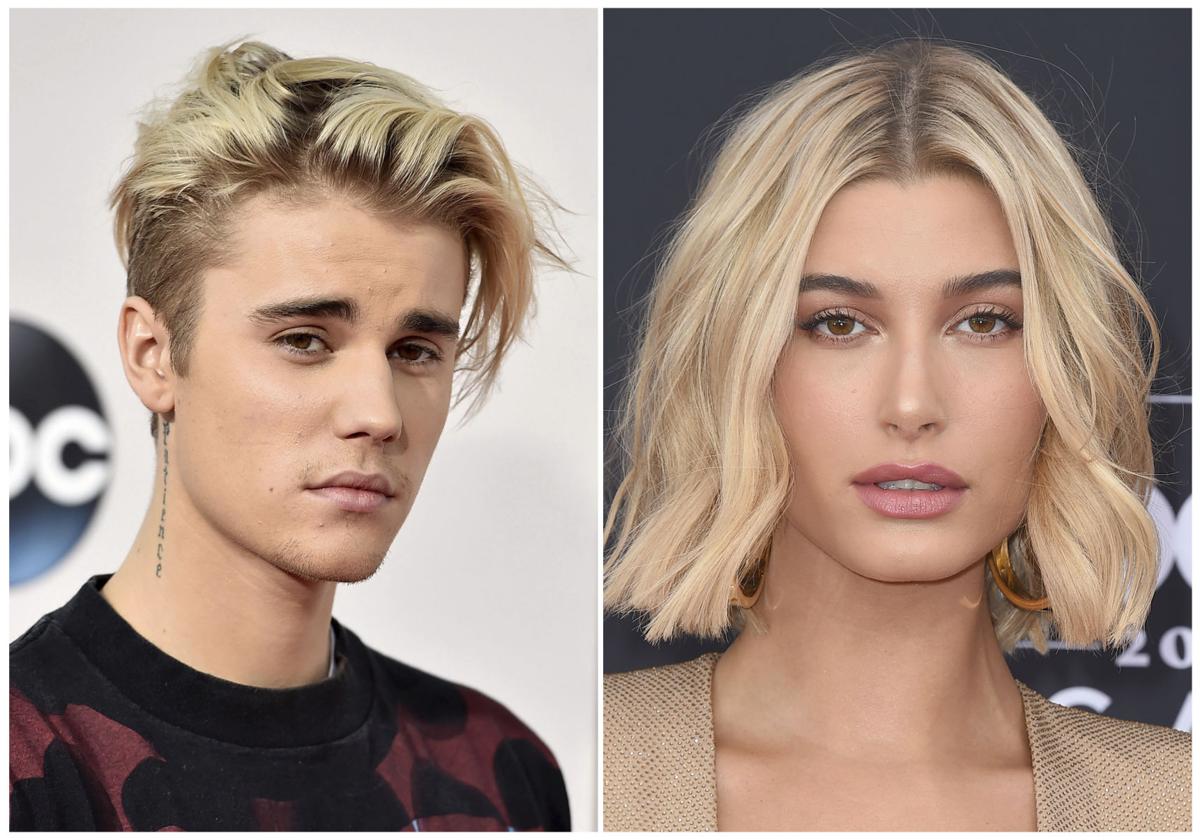 This combination photo shows Justin Bieber at the American Music Awards in Los Angeles on Nov. 22, 2015, left, and Hailey Baldwin at the Billboard Music Awards in Las Vegas on May 20, 2018, in Las Vegas. Following his reality series on YouTube, Justin Bieber and model-wife Hailey Bieber will debut a new series on Facebook Watch on Monday. The 12-episode “The Biebers on Watch” follows the famous couple’s life in Toronto and will be filmed on go-pros positioned around their home. New episodes will be available Monday, Wednesday and Friday. (AP Photos by Jordan Strauss/Invision/AP) 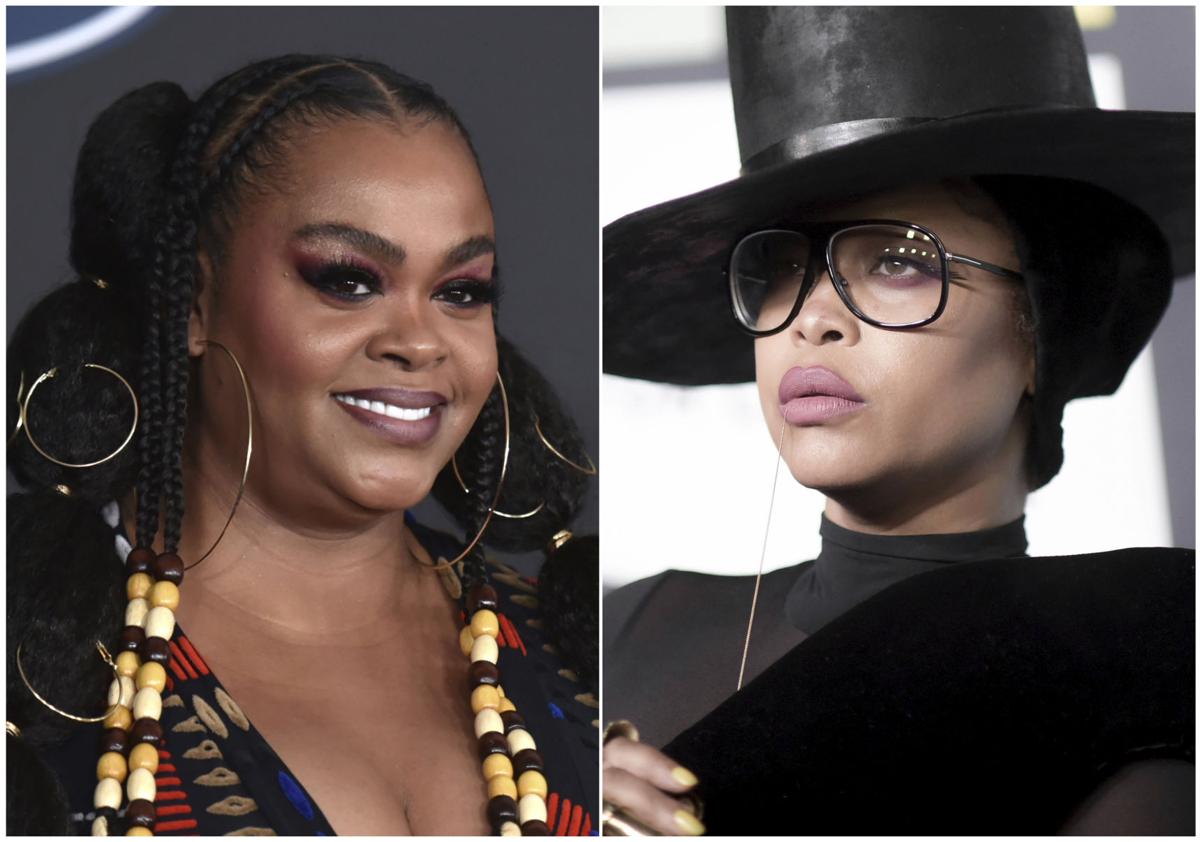 This combination photo shows Jill Scott arrives at the 51st NAACP Image Awards in Pasadena, Calif. on Feb. 22, 2020, left, and Erykah Badu at the 8th Annual Essence Black Women in Music in Los Angeles on Feb. 9, 2017. The queens of the neo-soul movement will battle it out on Instagram Live _ marking the first female showdown in Swizz Beatz and Timbaland’s epic “Verzuz” series. The Saturday battle technically starts at 7 p.m. EDT. (AP Photo) 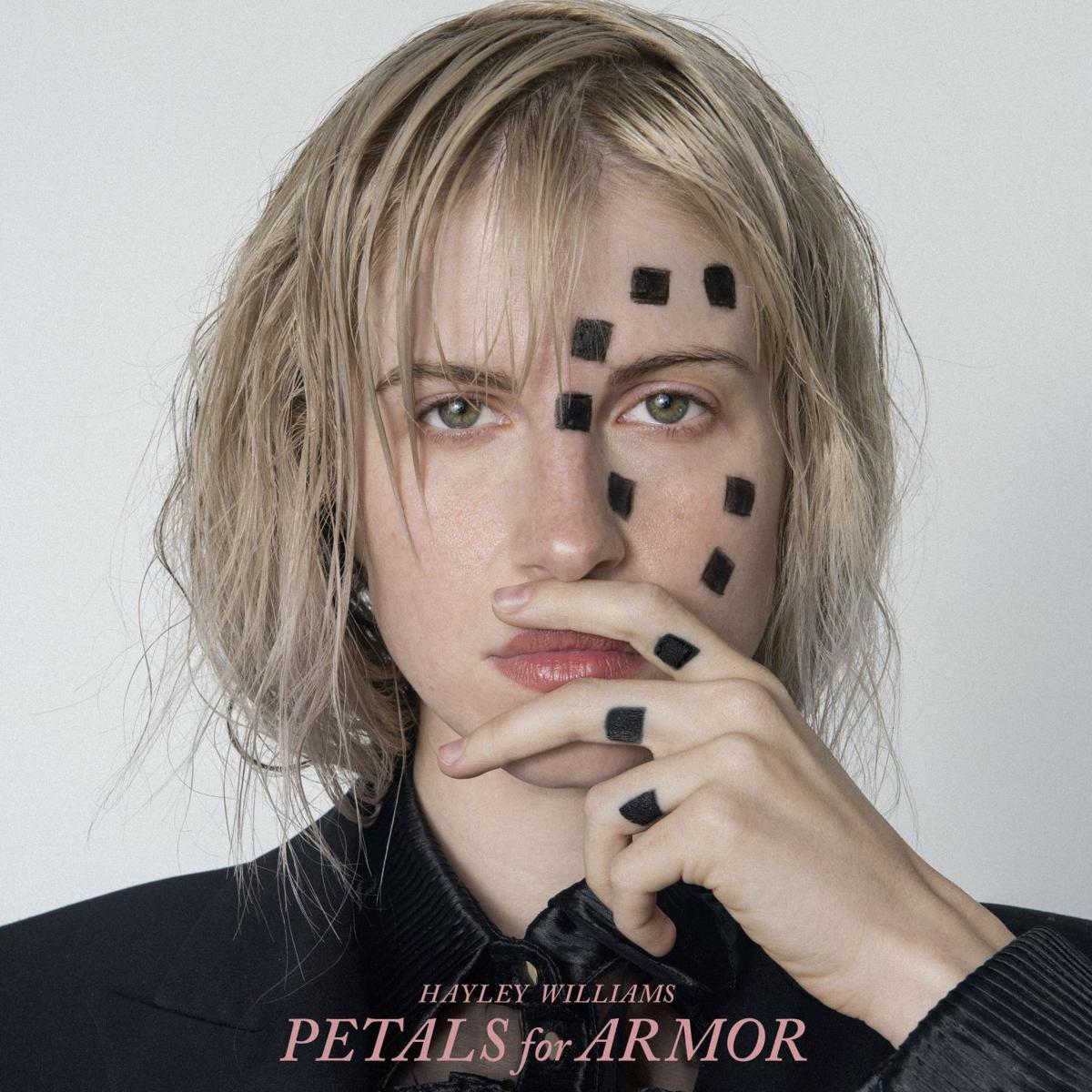 This cover image released by Atlantic Records shows "Petals for Armor" by Hayley Williams. The Paramore frontwoman is releasing her solo debut album on Friday. (Atlantic Records via AP) 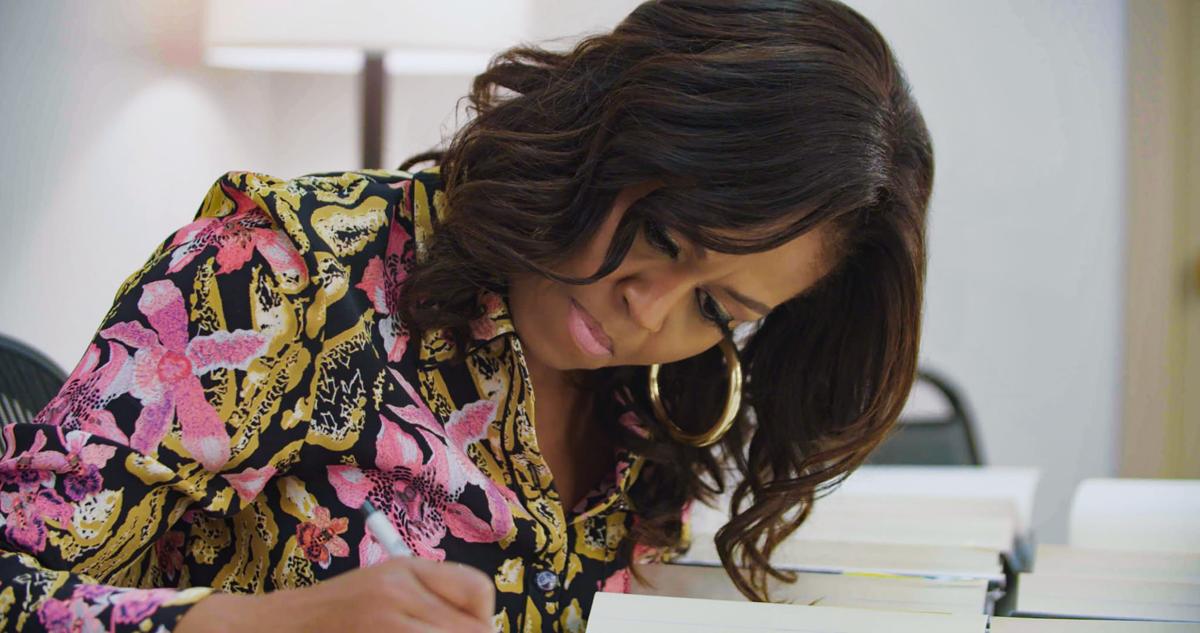 This image released by Netflix shows former first lady Michelle Obama in a scene from "Becoming." (Netflix via AP)