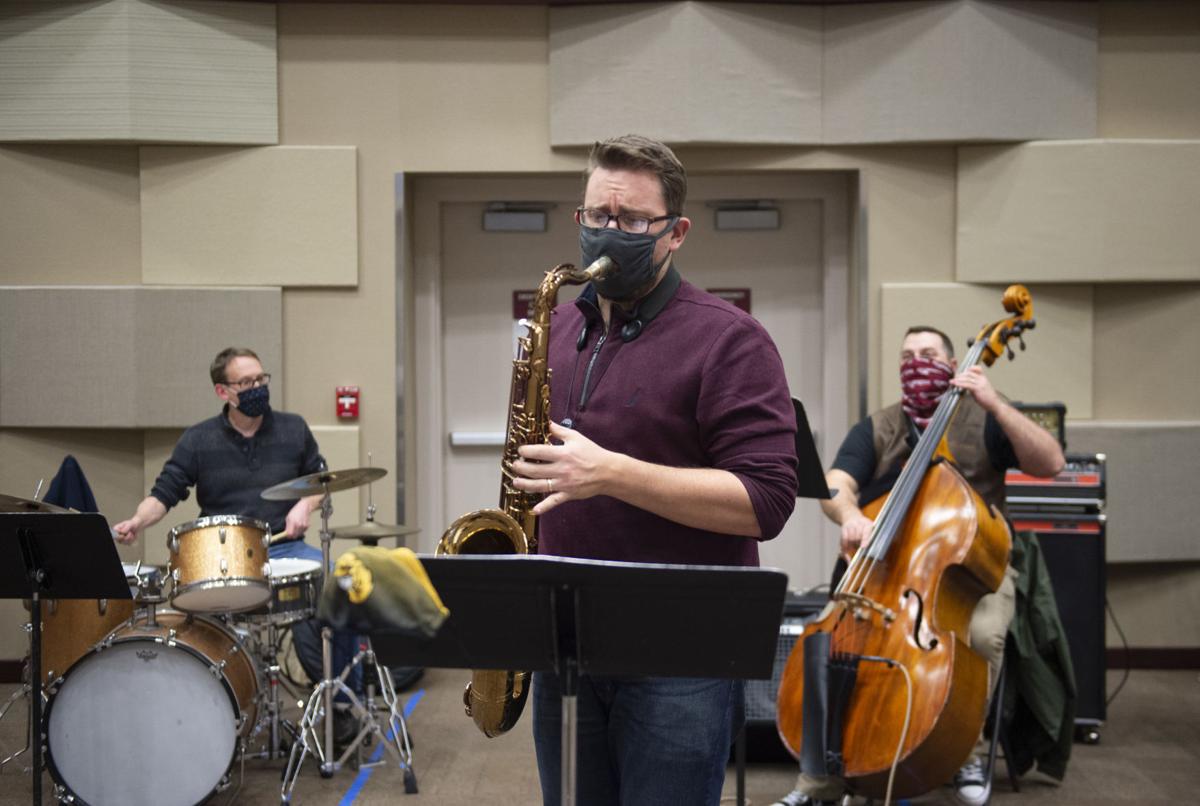 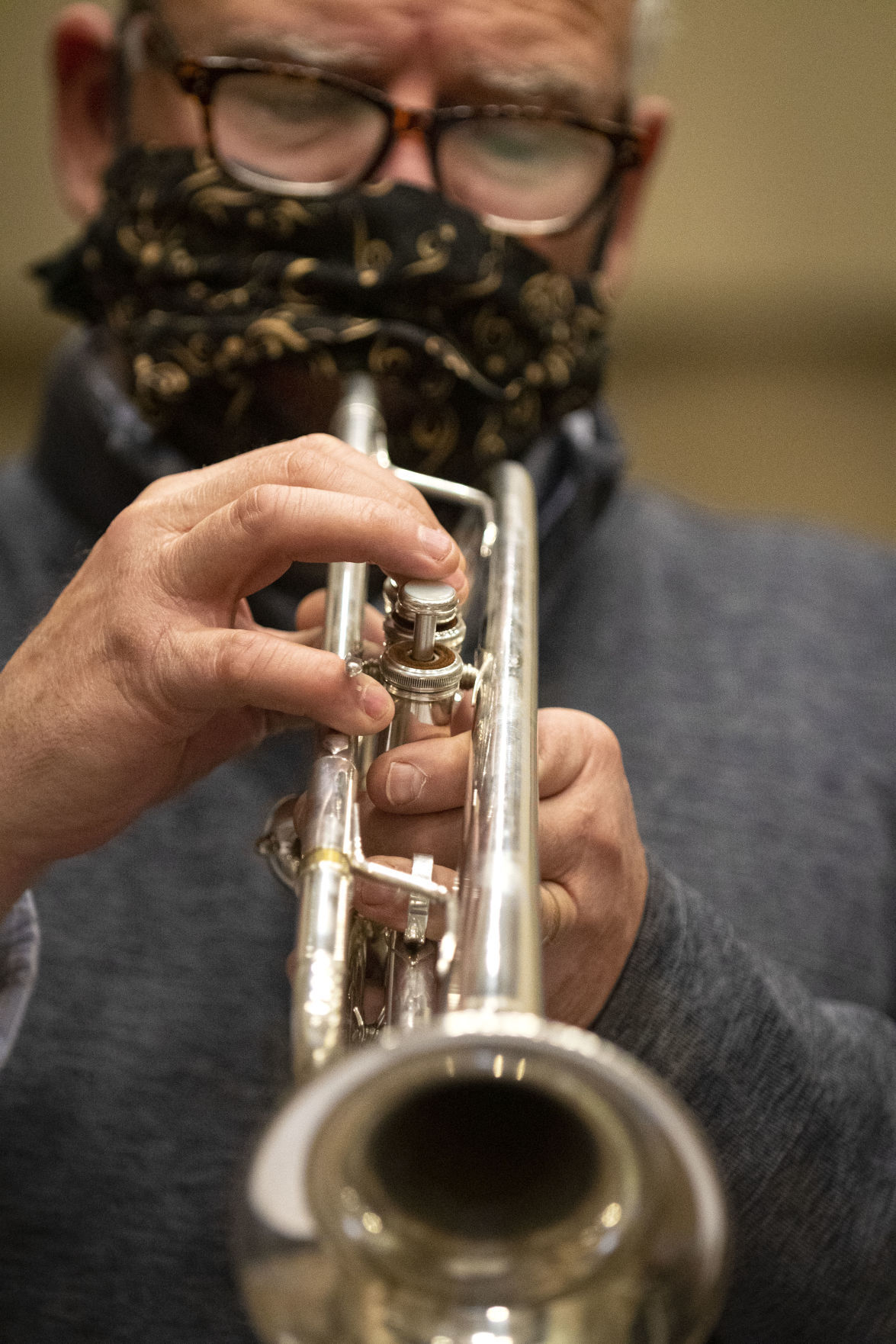 Rick Speicher plays the trumpet during rehearsal with Sound Expression on Tuesday at CSI in Twin Falls. 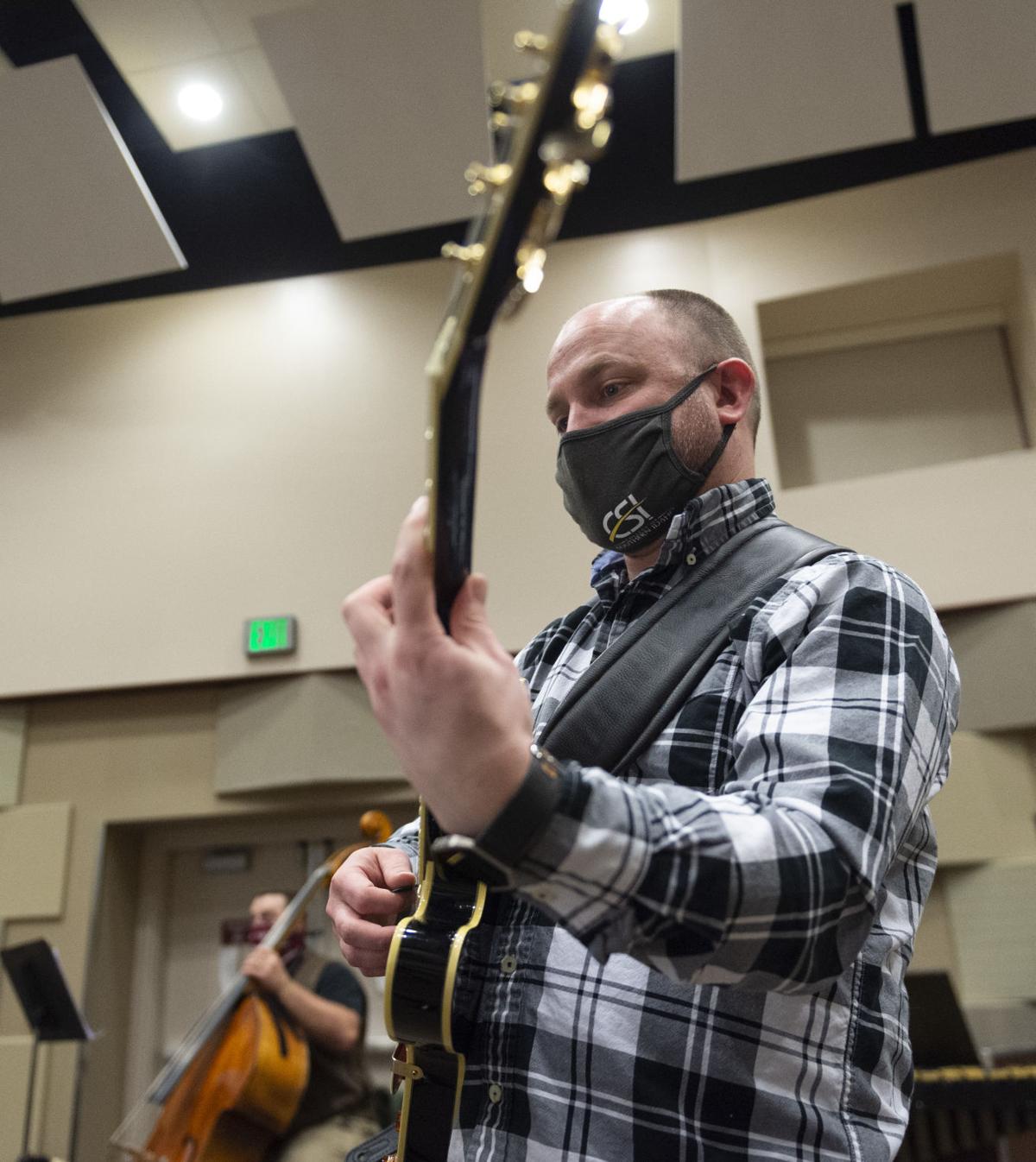 Michael Frew plays his guitar during rehearsal with Sound Expression on Tuesday at CSI in Twin Falls. 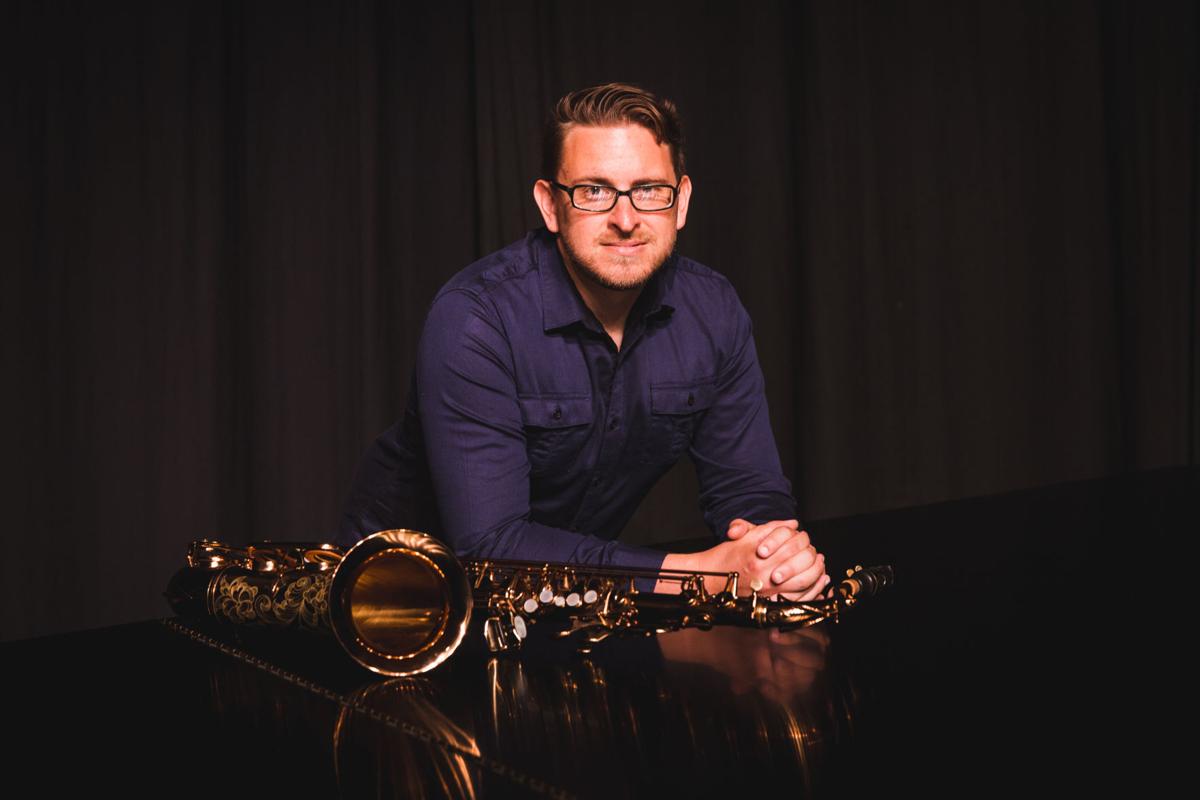 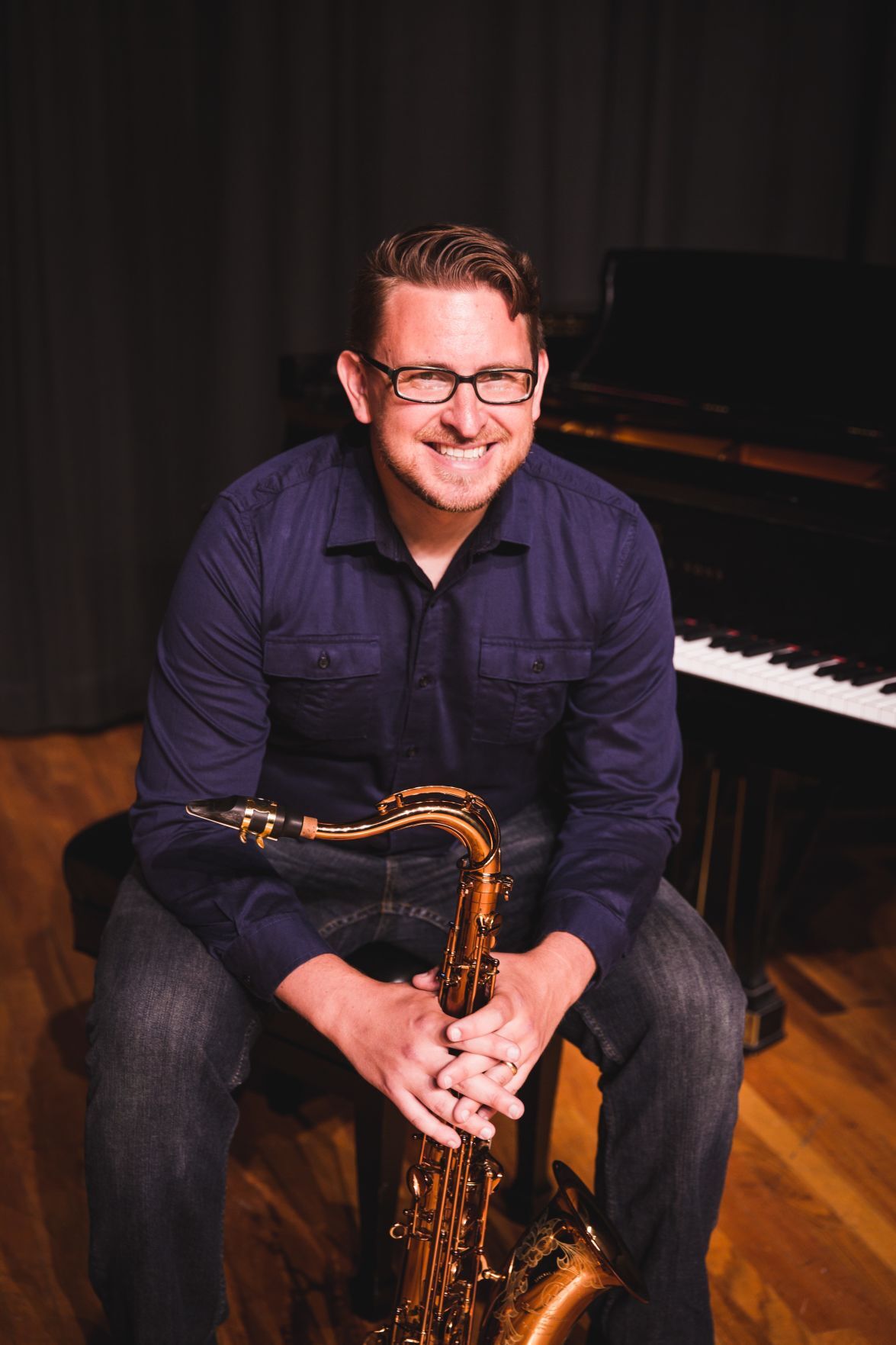 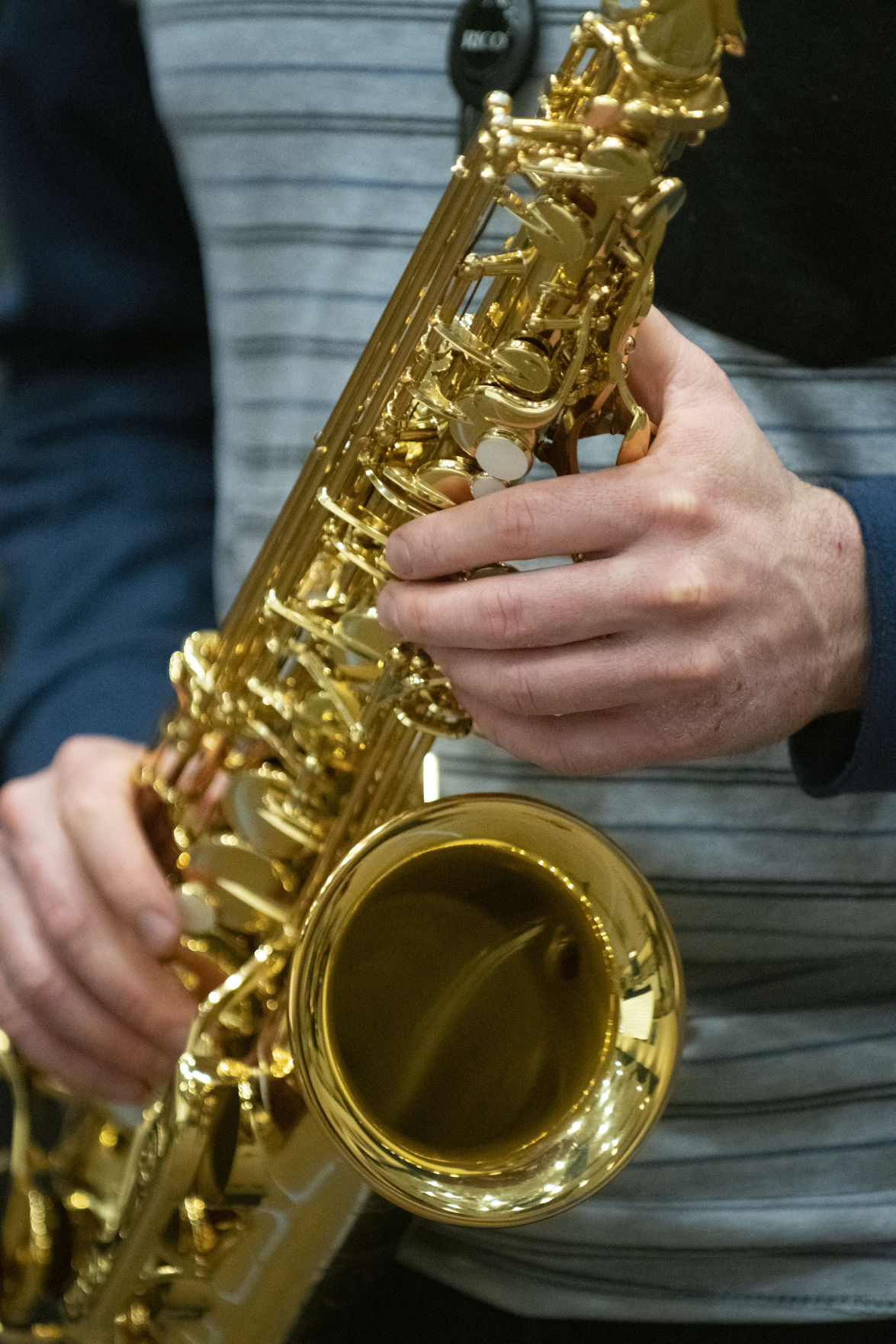 Jarom Christensen on alto sax rehearses with Sound Expression on Tuesday at CSI in Twin Falls. 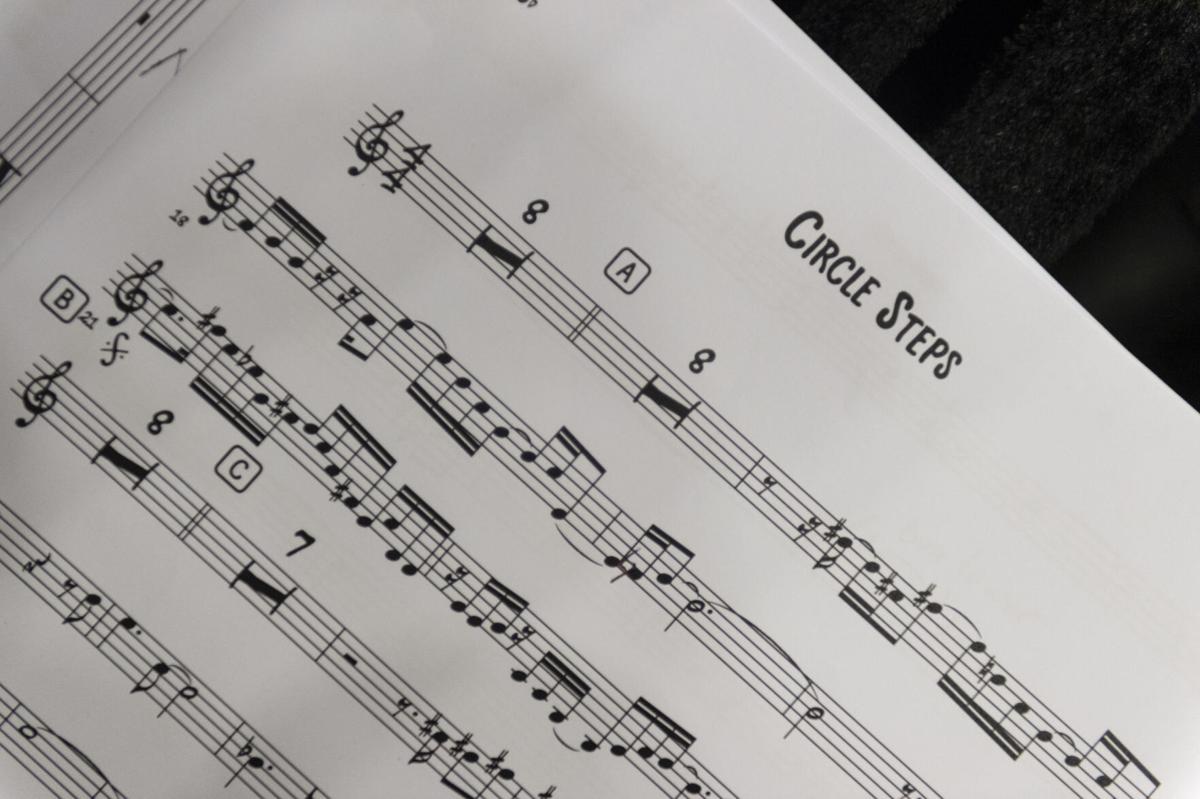 Sheet music is used to during rehearsal Tuesday at CSI in Twin Falls.

Tetona Dunlap For the Times-News

Playing for a live audience will take on a new meaning this Saturday night at the College of Southern Idaho.

Ben Britton’s Sound Expression, a local jazz sextet, will play live at 7:30 p.m on the CSI Fine Arts Auditorium stage to an in-house audience of zero.

No one is allowed inside during the live performance, but many will have the opportunity to listen in.

Ben Britton’s Sound Expression will be livestreamed to ticketed viewers who can watch the event at home in real time or anytime afterwards at their leisure. Livestream tickets are $10 at csi.veeps.com.

The Twin Falls based group is composed of Ben Britton on tenor sax, Rick Speicher on trumpet, Jarom Christensen on alto sax, Michael Frew on guitar, Alex Doetsch on drum set, and Dean Rodemack on bass.

Britton teaches jazz and woodwinds at CSI and leads the CSI Jazz Ensemble, small jazz groups, the pep band and the CSI Youth Jazz Ensembles. In 2007, he was selected to participate in a residency at the Kennedy Center as part of the Betty Carter Jazz Ahead program. In 2012, he was a finalist in the Detroit Jazz Festival National Saxophone Competition and won the First annual Charlie Parker Cutting Contest hosted by NPR’s 12th Street Jump. Britton earned a doctorate in Jazz Studies in 2016 at the Eastman School of Music in Rochester, N.Y.

Britton answered emailed questions before the show about how the group formed, how the pandemic has affected local live music and what kind of show viewers can expect.

When was your group formed?

I’ve been performing with Michael Frew (guitar), Alex Doetsch (drums), and Rick Speicher (trumpet) in different configurations since I moved to Twin in 2017, playing at small venues here in Twin like Twin Beans, Von Scheidt Brewery, the Sandwich Company, etc.

Where has the group performed in the past?

In late 2019, I met Dean Rodemack (bass) and put together a version of this group to play some of my compositions and arrangements. We performed at Koto, and then the pandemic hit, which has really curtailed performing opportunities and appropriately so. When the college developed the ability to live-stream shows, I wanted to write some new music and put together a bigger version of our group. The newest addition to the group is Jarom Christensen (alto sax) who moved back to Twin because of the pandemic. He had been a pro-musician on a cruise ship. All of these guys are fantastic musicians, and I’m really excited to debut the group along with all new music I’ve written and arranged on the 16th.

How long have you been a musician?

I’ve been a musician for almost as long as I can remember. My dad started teaching me piano when I was pretty young, and then I did band and saxophone lessons growing up. I went to college as a music major straight out of high school, and I started performing professionally during my undergrad.

Has it been difficult to book gigs because of the pandemic?

The pandemic has shut down live music across America. A lot of my friends are jazz musicians based in NYC and make their living off performing, and the pandemic has been very difficult for them. Gigs and shows locally have been really scarce as well. For example, I usually would have played with a small group at a few parties and events over the holidays, and there weren’t any of those opportunities. Before the pandemic, there were also monthly gigs at a few places around Twin (the venues I mentioned earlier), and those all ended back last March.

Have you ever performed for a live audience that wasn’t in the room?

I’ve performed in hybrid situations before where there was a live audience as well as an internet audience, but never to just a virtual audience. Two of my student-groups at the college did put on a live-streamed-only concert at the end of the past fall semester, and I directed the big band and announced the tunes. That was my first time putting on a show for an entirely empty venue, with just a virtual audience.

What are the benefits and setbacks to performing for a livestream audience?

I’m sure some performers’ nerves are a little more settled not having the pressure of a live audience, but at the same time it’s always exciting to have that added energy and feedback from the audience. Personally, I’d prefer to also have a live audience, but I’m really looking forward to this rare opportunity to perform amidst the pandemic.

Why should people buy tickets and tune in?

The band sounds great, and I’ve written some new music that I’m really excited to share. There’s also the magic of watching a live performance, even if it is over the internet. The music is decidedly jazz with elements of traditional straight-ahead jazz as well as some of the interesting trends that have developed in more recent years, but I also have written some tunes that draw on elements from pop music like rock, hip hop, and R&B. I think people will really enjoy the show.

For more information on Ben Britton and his music, go to benbrittonjazz.com.

Rick Speicher plays the trumpet during rehearsal with Sound Expression on Tuesday at CSI in Twin Falls.

Michael Frew plays his guitar during rehearsal with Sound Expression on Tuesday at CSI in Twin Falls.

Jarom Christensen on alto sax rehearses with Sound Expression on Tuesday at CSI in Twin Falls.

Sheet music is used to during rehearsal Tuesday at CSI in Twin Falls.