ALBION — The former Albion Normal School, now the Albion Campus Retreat and Haunted Mansions of Albion has a long-standing reputation for ghost activity.

The answer to the question of whether the campus is really haunted may depend on who you ask.

While the haunted mansions consist of actors and props, legends of ghosts and paranormal activity on the campus persist, co-owner Troy Mortensen said.

“There are a lot of great ghost stories here,” Mortensen said.

When his family first arrived at the campus, he said, he was much more skeptical than he is now.

“I never had a ghost experience myself until the year before last,” he said.

At 11:30 p.m. one night he saw lights on at Miller Hall, which he figured had been left on by mistake. After calling his wife to confirm she wasn’t there, he went in and started going from room to room shutting off the lights when he heard footsteps in the hallway.

He assumed someone had snuck into the building to try to scare him.

He then heard the door to room 13 close. But when he went to see who the prankster was the door was open.

In fact, no one was in the building and the doors were all locked.

Mortensen said their staff has had many experiences and at times have come running out of buildings scared out of their wits.

Nearly 35 ghost-hunting groups have come through the buildings including the cast of Travel Channel’s “Ghost Adventures” in 2017.

While a television show may need to dramatize events for its audience, Mortensen said, there are plenty of people around with first-hand accounts of unexplained phenomena, including persistent sightings of a ghost at Comish Hall, who is believed to be a former cook at the school.

The unusual activity usually consists of a rush of wind or cold and warm spots in the air, Mortensen said.

But there are reports describing sightings of a woman who is about 5 feet tall with red hair. Sometimes people smell bread baking, Mortensen said.

Mortensen had a conversation with a woman visiting the campus museum who claimed she was the ghostly cook’s daughter.

The woman said her mother had raised 12 children in a two-bedroom house in Albion and the campus was her sanctuary, Mortensen said.

The only discrepancy in the woman’s story and the ghost sightings is the woman said her mother’s hair was black not red, he said.

In 2017, former campus caretaker John Kay Powell, of Albion, told the Times-News that while many people focus their paranormal interest on Comish Hall, his most chilling encounter happened during the day while he was mowing the lawn at Miller Hall, before the Mortensens owned the campus.

There was a horizontal pipe coming out of the building that could be hooked to an irrigation hose. As he was mowing the lawn, he said, the pipe slid out from the wall another two-feet.

“The building was all boarded up at the time and I though there must be some kids in there,” Powell said. “So I got off the riding lawnmower to check, but all the doors were locked.”

Powell said during WWII all the young men were at war, and Miller Hall, which was the men’s dormitory at the school for teachers, was boarded up and used as a Halloween spook alley.

In 2017 Troy Mortensen told a story of when they first bought the buildings and an excavator operator saw a young girl in the windows of one of the buildings.

“He wouldn’t go into the building,” Mortensen said.

In 2015, Jeralee Jones, then a manager, told the Times-News she did not believe in the paranormal and she hadn’t seen any spirits in any of the buildings, but she did say they had workers who were so scared after going into buildings that they never came back to work.

The stories and legends aside, Mortensen said, the campus is a labor of love for his family.

There is tremendous cost to keeping the buildings operational, which included investing $500,000 into roofs, “which have no scare value,” he said.

Mortensen, who formerly owned a haunted attraction at a Meridian creamery, remembers when he first drove into the Albion Valley and saw the campus.

“We love the history, that’s why we do it,” he said. “I’ve heard people say we should just knock it all down and put in condos and I say no, there are plenty of other places for condos.” 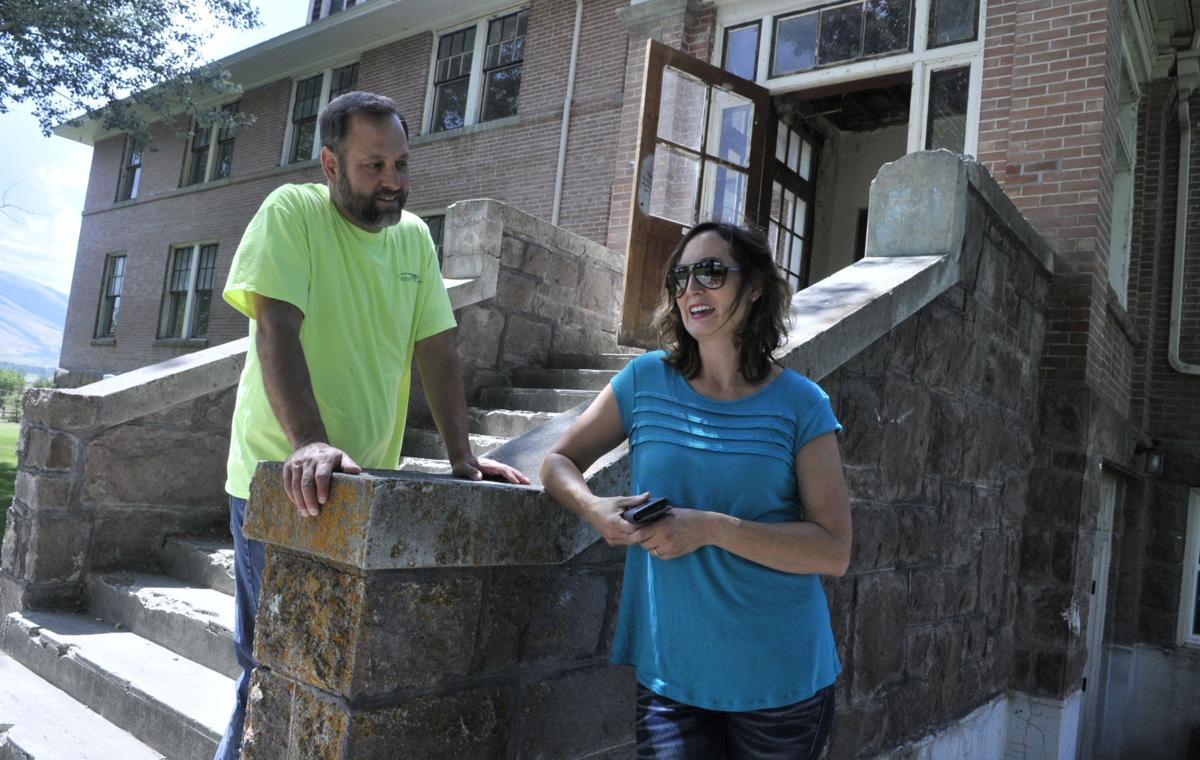 Troy and Heather Mortensen, of Albion, talk about the Travel Channel’s Ghost Adventures filming an episode at the old Albion State Normal School on Aug. 11. 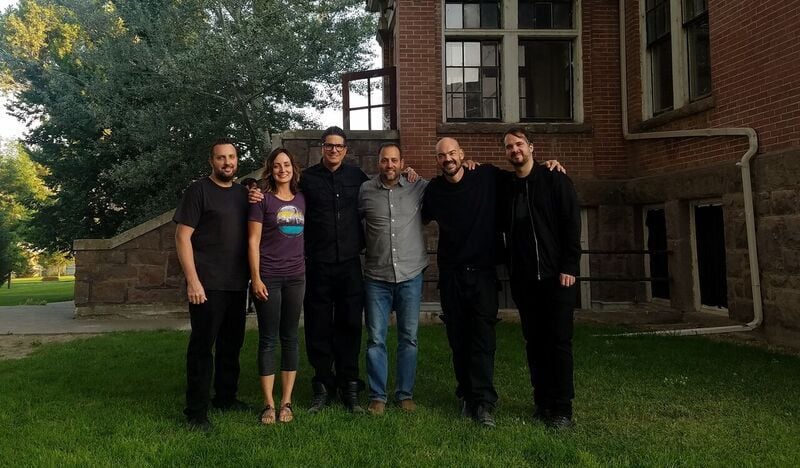 Heather and Troy Mortensen pose with the Ghost Adventures crew, Zak Bagans, Aaron Goodwin, Billy Tolley and Jay Wasley during the show’s filming in July 2017 at the old Albion college. 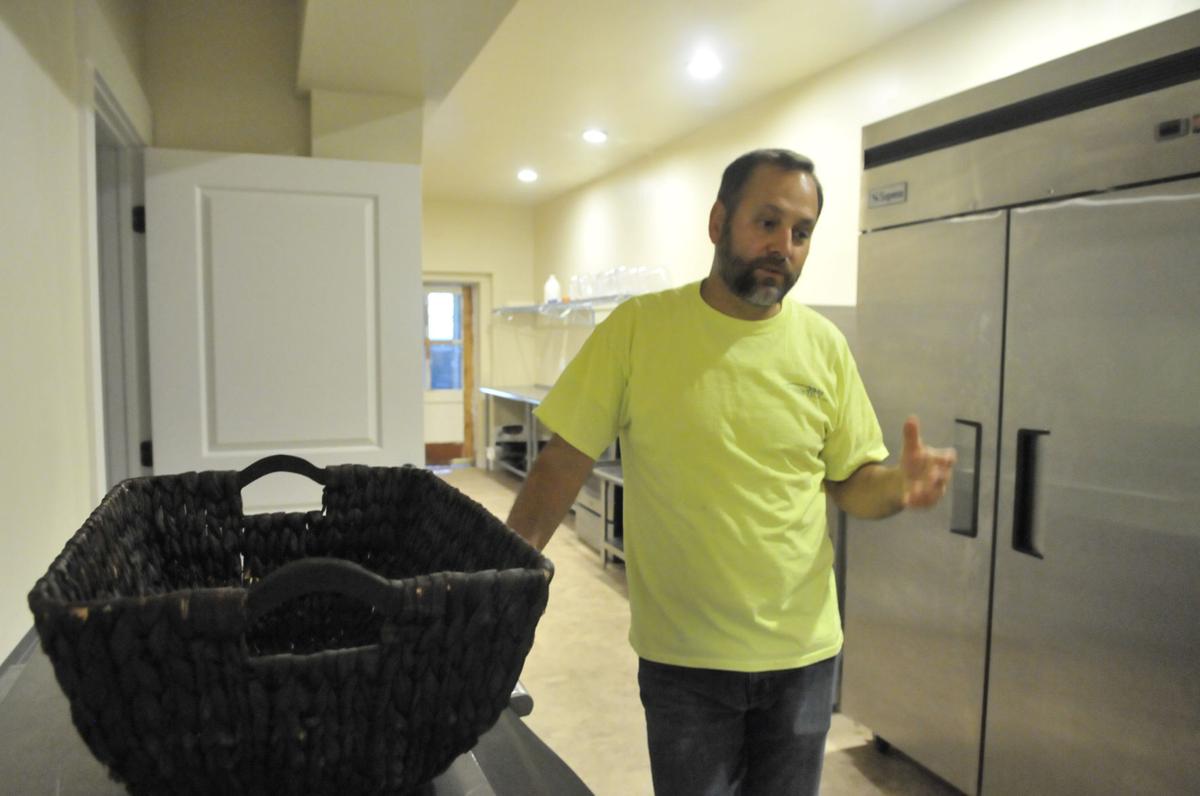 Troy Mortensen talks in 2017 about an apparition of a woman who is seen in the kitchen in Comish Hall.