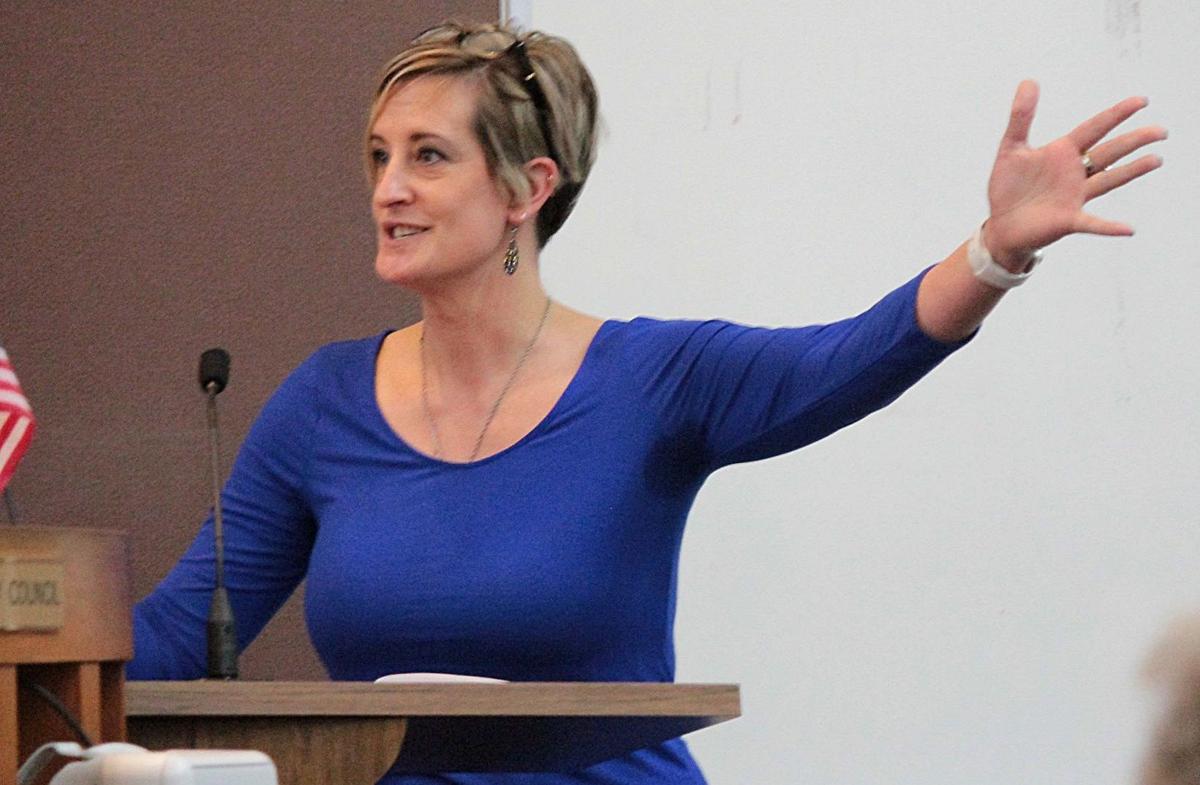 Marcy Logsden tells the Elko City Council about her personal and professional experience with people who use medical marijuana during public comment on an ordinance to prohibit sales of marijuana in Elko city limits. 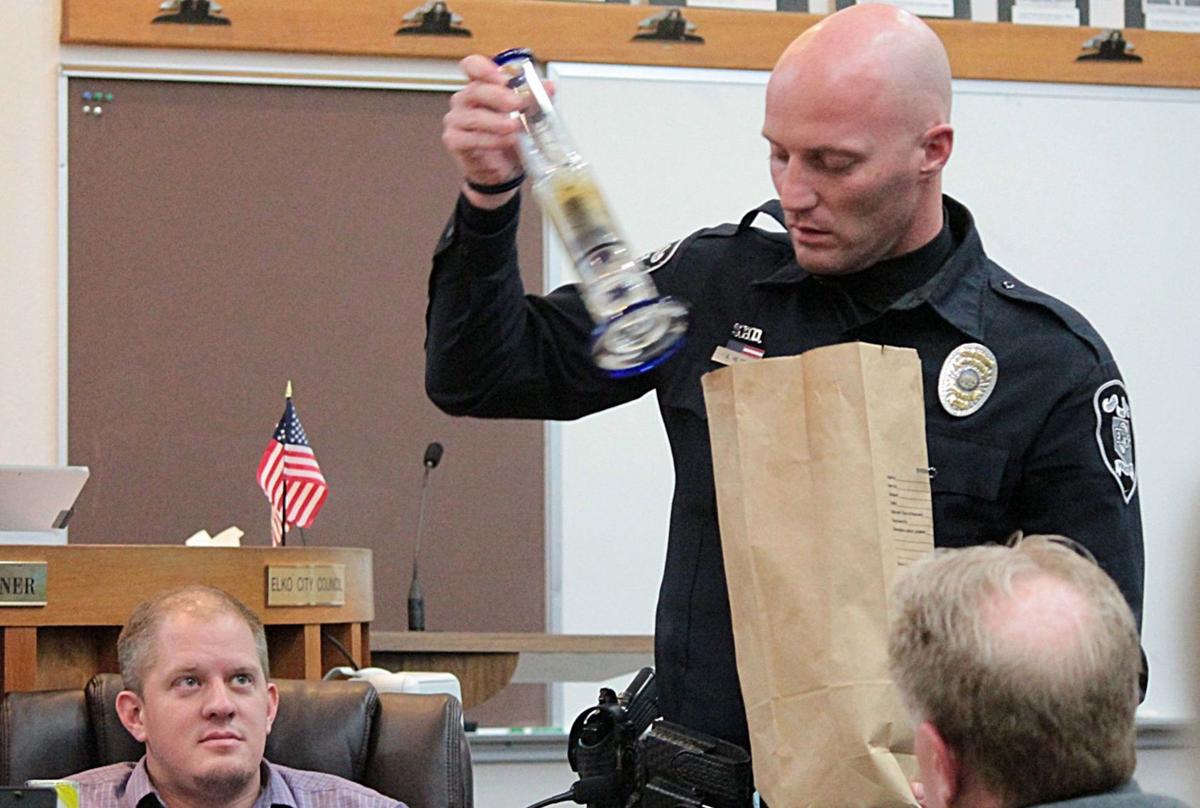 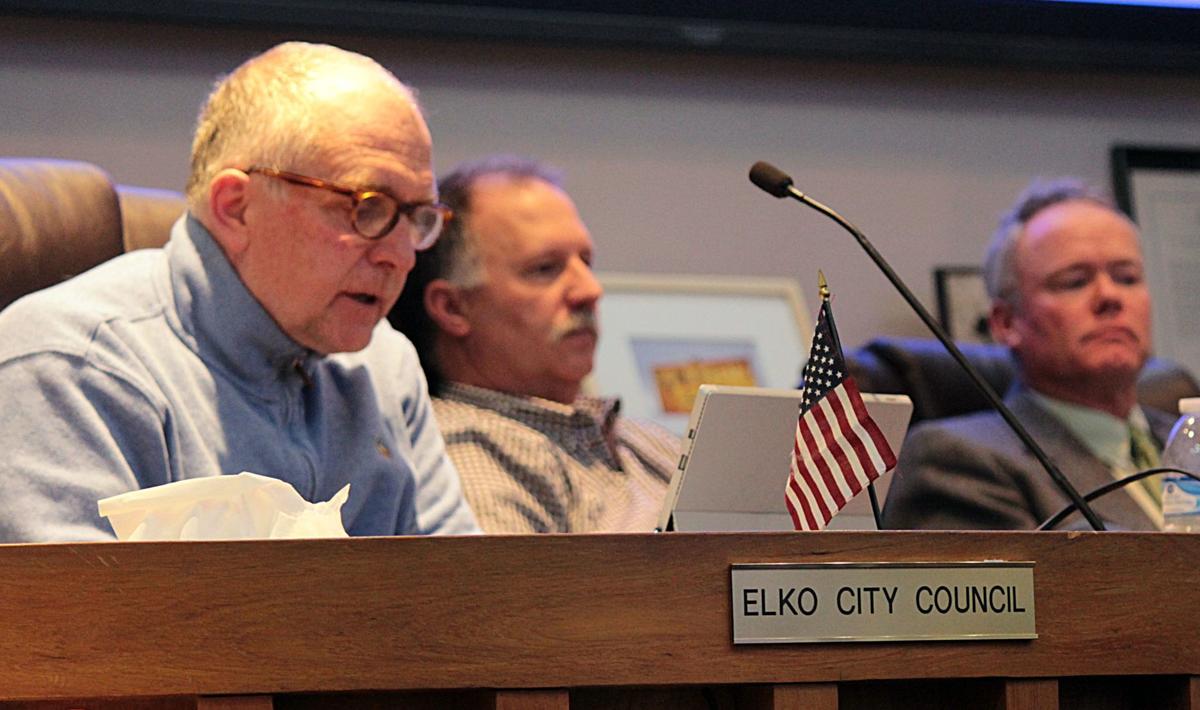 Mandy Simons and Reece Keener listen to discussion about an ordinance to prohibit medical and recreational marijuana sales in Elko city limits.  The city council approved 3-2 to prohibit establishing a dispensary, which followed more than two hours of written and spoken testimony from the public.

ELKO – Letters and personal testimonies mostly supporting medical cannabis users in Elko prolonged the public hearing portion of the second reading of an ordinance to prohibit the establishment of a marijuana business.

After two-and-a-half hours, the Elko City Council approved of the ban on recreational and medical marijuana establishments within city limits, with Mayor Chris Johnson casting the tie-breaking vote.

Councilmen John Patrick Rice and Robert Schmidtlien voted no, while Reece Keener and Mandy Simons voted to approve the ordinance banning medical or recreational sales in the city.

The vote came after an additional 30 minutes of debate among council members as Rice implored the others to vote down the ordinance and come back with a newer version that would prohibit only recreational establishments in Elko, but not medical dispensaries, pointing to numerous letters and testimonies from medical marijuana users and their family or friends.

About 12 letters were read and 12 people spoke at the meeting Tuesday night in which all but two asked the council to vote against prohibiting a marijuana dispensary in Elko.

Most who sent letters or spoke shared personal experiences of family, friends or themselves who suffered with medical conditions such as chronic pain, and tried cannabis as an alternative to pain medications like opioids.

Some asked the council why marijuana was being singled out as being more harmful than alcohol and other harder substances, with one person asking the council if they were “picking and choosing” what substances were approved for use in Elko.

Marcy Logsden of Elko told the council that working as a registered nurse she had seen people who desire to get off of pain medication and said she supported their choice to take cannabis because they “are going out of their way to better their lives.”

“They are traveling far and wide to get what they need so they can get away from opiates and costly steroid injections. It works for them,” Logsden said.

“They are managing their health care, which is what we want as health care providers. We want the shift from chronic maintenance which is such a burden on our society, to being preventative,” Logsden continued.

Rice made a motion to reject the ordinance altogether and have a rewritten version prohibit a recreational establishment only, which was not approved before the final vote.

“I love you guys, but I just don’t understand how you can have your heels dug in so deeply especially on the medical marijuana issue,” Rice said. “It would serve the community well to take another look at this.”

School Resource Officer Aaron Hildreth bought several glass bongs that he said were confiscated in Elko County School District schools since marijuana was legalized in 2016, explaining that marijuana use had increased in the schools because of the mixed message students receive from their parents and the law, stating he was against a dispensary in Elko for those reasons.

“To me, any way you look at this, it’s sending that message and kids are interpreting it different than we are,” Hildreth said. “The big thing is now, marijuana is readily available to adults” and now to their children.

Before the final vote, all council members and Johnson weighed in with their final thoughts.

Johnson thanked the people who spoke and sent in letters which explained their support for a medical marijuana dispensary, but said he was committed to the position he took on the issue two weeks ago.

“There’s a lot of work you’ve done here tonight and you’re getting the message out and so that’s what you’re going to have to do,” Johnson said to the supporters in attendance Tuesday night, noting that 200 people were watching the meeting online.

“My opinion is, you’ve heard it before, when I weigh the benefits to the community and the risk of loss, I can’t vote to allow it,” Johnson said.

“My goal as mayor is to make it so that everyone can provide their opinion. It’s not a personal thing for me, it’s a weighing of what I think is best for the community,” Johnson said.

Simons said her opinion of medical marijuana “has evolved,” and said she saw how it benefited many people, but that the city council had no power over the federal government. She suggested that the debate focus on the government allowing pharmacies to dispense instead.

“Medical marijuana is, in fact, legal in the state, but federally it’s illegal and we have no control over that,” Simons said, but added that she couldn’t understand using medication recreationally.

“Let’s get it as a medicine. Let’s get this rescheduled and in the pharmacies where you can get a prescription, pick it up and go at a reasonable price,” Simons said. “That’s where I’m at.”

Keener said that the emails and testimonies given Tuesday night were “very compelling,” but that for the council to allow any type of marijuana dispensary in Elko would be “violating our oath of office.”

“It is illegal at the federal level and that’s what I’m getting hung up on,” Keener said. “I think it’s a bad policy for the community and if the four of us on this committee are wrong, I know that the community will certainly speak up and throw the bums out.”

“If you would have put them as separate, I would have gone along with it, but you insisted to put them together and that’s the reason I voted yes,” Schmidtlein said.

Rice replied and said it was combined to be a compromise to the council.

See the Elko Daily Free Press weekend edition for an in-depth report on medical marijuana users in the Elko area.

Marijuana in Elko County: A collection of coverage in the Free Press

Marcy Logsden tells the Elko City Council about her personal and professional experience with people who use medical marijuana during public comment on an ordinance to prohibit sales of marijuana in Elko city limits.

Mandy Simons and Reece Keener listen to discussion about an ordinance to prohibit medical and recreational marijuana sales in Elko city limits.  The city council approved 3-2 to prohibit establishing a dispensary, which followed more than two hours of written and spoken testimony from the public.