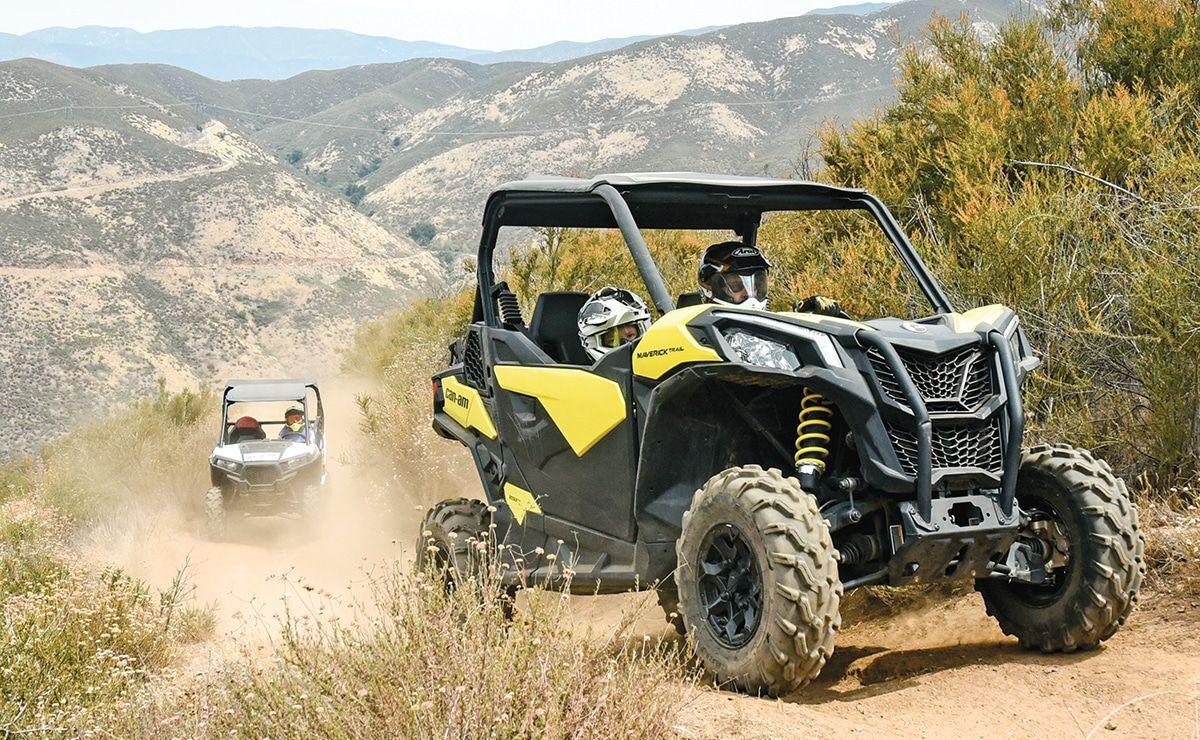 Utility Terrain Vehicles, also known as UTVs or side by sides, are a popular way to see the Idaho backcountry.

A combine harvests wheat on Larry Hollifield's field in Filer in August. Due to the warm weather, wheat, oats and barley crops have been impacted this year.

TWIN FALLS — Even before the 2021 Small Grains report came out at the end of September, south-central Idaho producers already knew what it was going to say.

“Unfortunately we were expecting to see a huge drop in production,” said Casey Chumrau, executive director of the Idaho Wheat Commission. “Of course seeing it in black and white brings it to reality and it’s never easy to see.”

The data for 2021 paints a bleak picture for Idaho.

Idaho planted 510,000 acres of spring wheat in 2021, the same acreage as 2020. However, yields went from 91 bushels per acre to 63 bushels per acre. A bushel of wheat is equivalent to 60 pounds of wheat or about one million wheat kernels.

And Idaho wasn’t the only state that struggled. Winter wheat production across Idaho, Washington and Oregon was down 40% this year, the lowest year on record since 1991.

“The truly unprecedented thing I think about this year is that it affected every acre of land in Idaho,” Chumrau said. “Usually we kind of depend on our geographic diversity and the sheer size of the state and the microclimates to ensure that at least some part of the state will have a normal crop.”

Looking at last winter, the snowpack and soil moisture conditions were OK, but the spring rains never materialized, she said. The Idaho Wheat Commission, which Chumrau runs, is a non-profit that is funded through a tax paid by growers. The commission aims to develop more markets for Idaho wheat growers, support research and provide grower education.

“Moist, cool weather is ideal for wheat,” said Wayne Hurst, a commissioner for the Idaho Wheat Commission. “And we had hot dry weather.”

More than 96% of farms in Idaho are family farms, according to the 2017 Census of Agriculture. Low production years hurt smaller operations and the small communities farmers live in, Chumrau said.

“While the average was 32% there were people who saw 40, 50 and 60% lower than their average production so that has a huge impact,” she said.

Test weight is a density measurement that is used to determine grain quality. Local grain buyers might not accept grain with a low test weight or offer less money for it.

Soft white wheat is the largest class of wheat grown in Idaho. Millers and bakers prefer low protein due to the products they use it for, which includes cookies, cakes and crackers. The high heat this year resulted in a higher protein content that makes it harder to sell.

“We are looking at how to market and use that higher protein soft white and working with customers to make sure they know what kind of crop is going to show up at their door and how they can adjust to take advantage of it,” Chumrau said.

Luckily, the prices for next year are high and no matter what happens in terms of weather, producers will make a plan and move forward the best way possible.

“Growers never hope for these years, but they do plan for them,” she said.

No barley, no beer. And the barley crop is really struggling in 2021

"If somebody said they had a great crop they are lying. We all at the coffee shop grumble about it."

The “Noble Experiment” — better known as Prohibition — had taken root in Idaho long before the 18th Amendment was ratified.

In 1905, Twin Falls city trustees tried to discourage the sale of alcohol by charging saloon operators an exorbitant amount for an annual liquor license. The following year, a local chapter of the decades-old Women’s Christian Temperance Union was organized to create a “sober and pure world,” according to its publications.

In November 1909, Twin Falls County voted to abolish liquor, and saloons in the county closed two months later. In 1916, the entire state of Idaho went “dry.”

The 18th Amendment to the U.S. Constitution was ratified in January 1919 and took effect the following year. But that didn’t stop residents from making their own liquor.

In 1923, word of an illegal still on Orville Fairchild’s farm near Buhl made its way to Twin Falls Sheriff’s Deputy Virgil Ormsby.

While the case was not isolated, it was unique, Ormsby told the Twin Falls Weekly News.

The ambitious deputy raided the Fairchild farm and found nothing unusual. He then spotted smoke trickling from a culvert under a road about 400 feet away from the farmhouse. Ormsby climbed into the culvert and knocked on the wall of the pipe; his knuckles were met with an echo.

Ormsby and the other deputies dug into the road surface and found four-inch-thick planks, then found an 8-by-15 room under the planks. Inside the room, they found a complete still, a woodstove and shelves full of reading material, including a book on liquor manufacturing.

Eight jars of moonshine and the still and coils were confiscated. Six barrels of mash were destroyed.

Fairchild claimed the still was not his but pleaded guilty at his hearing.

Las Vegas casinos in the 1950s capitalized on the nuclear arms race by inviting visitors to watch atomic bombs explode in person. Some of the explosions were visible in Idaho.

Editor’s note: This feature first ran May 29, 2019, in the Times-News and at Magicvalley.com.

Each afternoon, Chester R. England would pull up the wooden sides of his flatbed and find some farmer with a crop to sell. He’d purchase enough produce to fill the truck in Ogden, then sell the fresh crop on his way back to Plain City.

DENVER (AP) — A former longshot Idaho gubernatorial candidate on trial in the 1984 killing of a 12-year-old Colorado girl wasn't even remotely considered a suspect to law enforcement until his obsession with the crime and incessant visits to talk with police about it provided clues that turned him into the suspect, prosecutors said Wednesday at the start of the man's trial.

Steve D. Pankey, a repeat longshot candidate, was arrested last year in the death of Jonelle Matthews. The girl's remains were found after her face appeared on milk cartons as one of the first missing children featured on them in an effort championed by former President Ronald Reagan. She had been fatally shot.

Pankey was a neighbor of the girl's family in Greeley, Colorado, a city of nearly 108,000 residents about 50 miles (80 kilometers) north of Denver.

Weld County District Attorney Michael Rourke said during his opening statement that Pankey's voluntary statements to law enforcement and journalists over the years, his intense interest in the case and strange behavior around the time of the murder recounted by his ex-wife prove his guilt.

"It's almost as if the defendant periodically and with increasing frequency would walk up to law enforcement, tap them on the shoulder and say, 'Here I am. Come and get me,'" Rourke said.

Pankey's attorney, Anthony Viorst, countered that prosecutors' circumstantial evidence, Pankey's overbearing personality and his obsession with "true crime" mysteries is not enough to convict him of kidnaping and murder. Viorst said he planned to introduce testimony suggesting police should focus on a possible alternate suspect.

"Steve Pankey is a busybody... He gets in the middle of things," Viorst said. "And when it comes to these true crimes situations, he's particularly interested and he gets particularly involved."

Jonelle was considered missing for more than 30 years until workers digging a pipeline in July 2019 discovered human remains matching her dental records in a rural area southeast of Greeley. Police then labeled her death a homicide.

Jonelle died from a single gunshot wound to her forehead, Rourke said.

Viorst said that Pankey's obsession came because he has Asperger syndrome, which causes his mind to process information differently and leads him to get "in middle of these things" to prove his own "self importance."

Viorst gave several examples of other crimes that Pankey inserted himself in by alleging to law enforcement that he had evidence or that he was directly involved.

Prosecutors said Pankey frequently contacted law enforcement offering to share information about the case that he said he learned from a pastoral confession that was not described in more detail, but would only do so in return for immunity from prosecution.

Rourke said Pankey's wife said he was never a pastor. Pankey also commented on a Greeley Tribune online article about the case, writing: "Without a deal, this case may never be resolved," Rourke said.

Prosecutors said Pankey kept up to date on the case throughout the years even as he moved his family to several states before settling in Idaho where he ran as a Constitution Party candidate for Idaho governor in 2014 and in the Republican primary in 2018, the year that authorities said he became a person of interest in the girl's death.

Law enforcement's seizure of Pankey's electronic devices led to the discovery of thousands of searches for information about the case long before he was considered a person of interest, Rourke said.

"You will see that it is a norm in that man's life to search for information regarding the Jonelle Matthews case," Rourke said.

Jonelle disappeared on Dec. 20, 1984, after she was dropped off at home by a friend and the friend's father. She was last seen at 8 p.m., entering the ranch-style home where she lived with her father, mother and sister. But when her father returned from her older sister's basketball game an hour later, Jonelle was gone.

Viorst, the defense lawyer, asked the jury to use common sense in piecing together the timeline of events and the lack of motive that Pankey would have had since Pankey did not know the Matthews family. Viorst also made it a point to express that Pankey had no sexual interest in young girls.

Pankey contacted the Idaho Statesman to tell his side of the story after he became a person of interest. He told the newspaper that he was home with his then-wife the night Jonelle went missing, their car packed for an early-morning trip the next day to visit family in California. They took the trip and returned home six days later in 1984, Pankey said, and he then heard the news about a missing child on the radio.

Prosecutors said the ex-wife recalled that the trip was unexpected and that on the way home, Pankey searched radio channels for news accounts of Jonelle's disappearance and stopped at a local grocery store to get newspapers with articles about the girl from preceding days.

Editor's note: This story was first published on October 13, 2021. It was updated on October 14, 2021, to make clear that Steve Pankey personally reached out to the Idaho Statesman to be interviewed about the case.